In the runoff election in Texas’s 7th District, Moser will have the support of organized labor, which has come out against opponent Lizzie Pannill Fletcher. Laura Moser, despite an attack from her own party, made it through the first round of a Texas primary on Tuesday, winning a place in a runoff against Lizzie Pannill Fletcher, an EMILY’s List-backed candidate.

Moser, in the May runoff in the state’s 7th Congressional District, will have the support of organized labor, which stridently opposes Fletcher, a partner in a law firm that represents employers and has played a significant role in targeting unions in the state. During the primary, the state AFL-CIO voted to anti-endorse Fletcher, meaning members were urged to vote for anyone but her. With just one candidate now running against Fletcher, Moser’s endorsement is all but assured. “The Texas AFL will have to formally endorse her, but it is a given,” said one high-ranking union official.

“Lizzie Fletcher’s law firm, and Lizzie herself as a partner, profited from the pain and loss of immigrant women janitors,” Joe Dinkin, a spokesperson for the Working Families Party, told The Intercept after the results were called. “That’s not right. If Democrats are going to win in November, we need candidates who fight for working families, not fight against them.”

Dinkin said the WFP would be spending money against Fletcher in the runoff, as it did already.

Fletcher finished first, with 31 percent of the vote, with Moser edging out progressive cancer researcher Jason Westin with 22 percent to his 20 percent. Had the Democratic Congressional Campaign Committee spent money to boost Westin’s campaign instead of going negative against Moser, Westin may have moved forward into the runoff. Indeed, had the DCCC done nothing at all, Westin may have survived — The Intercept noted on the morning of the party committee’s intervention that he was surging in the final weeks of the campaign, as his progressive platform, impressive medical credentials, and endorsement by the Houston Chronicle combined to give him a last-minute boost.

Voter-turnout expert Ben Tribbett argued that the DCCC pushed Moser over the top.

In #TX07, Fletcher led Moser by 19 points in absentee voting, 7 points in early voting and thus far they are tied in ballots cast today. Def. a DCCC backlash going on here. With the trend line- Westin led Moser by 5 in absentees- the attacks prob. pushed Moser into runoff here.

Alex Triantaphyllis, who told voters he was recruited by the DCCC and raised twice as much money as Westin, ran a centrist campaign and finished fourth, with 16 percent. Ivan Sanchez, Josh Butler, and James Cargas rounded out the pack.

Fletcher earned the un-endorsement for her work as a partner at AZA Law, a firm that largely represents employers and won a major case against local janitorial workers represented by the SEIU, who were predominantly immigrants. AZA Law boasted, in its effort to attract future business from employers, that it won the case in part by studying the social media feeds of the jury pool to make sure the jury was stacked with Donald Trump supporters.

The case was ideologically motivated to destroy labor: PJS, the firm’s client, was involved with Empower Texans, a right-wing group working to undermine organized labor in Texas.

The Working Families Party seized on this work and ran social media ads costing $20,000 to target Fletcher over her employment at AZA: 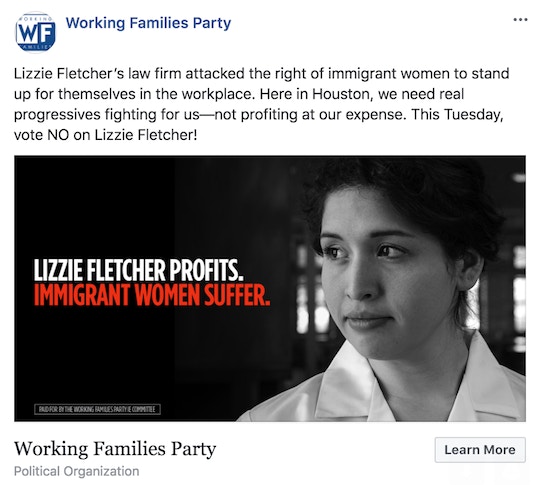 Moser made a name for herself by creating the text-messaging program Daily Action after Trump’s election, which recruited hundreds of thousands of people with text messages promoting a single political action every day.

The DCCC, the campaign arm of House Democrats, made an unusual intervention into the race by going nuclear and dropping a public opposition research document against Moser, arguing, among other things, that flippant pieces of writing she’d published in Washington would make her unelectable in the general.

Moser raised almost $90,000 after the DCCC’s attack, which turned her into something of a folk hero.

The runoff will take place on May 22.

Correction: March 7, 2018, 11:55 a.m.
An earlier version of this story misspelled voter-turnout expert Ben Tribbett’s name. The story has since been updated.

Top photo: Lizzie Pannill Fletcher, a Democrat running for the 7th Congressional District seat in the U.S. House of Representatives, and her husband, Scott Fletcher, walk out of the polling place at St. Anne’s Catholic Church after voting in the primary election on Tuesday, March 6, 2018, in Houston.