The centrist group No Labels backed an anti-abortion candidate in Illinois’ Third District in part because his challenger was supported by Bernie Sanders. 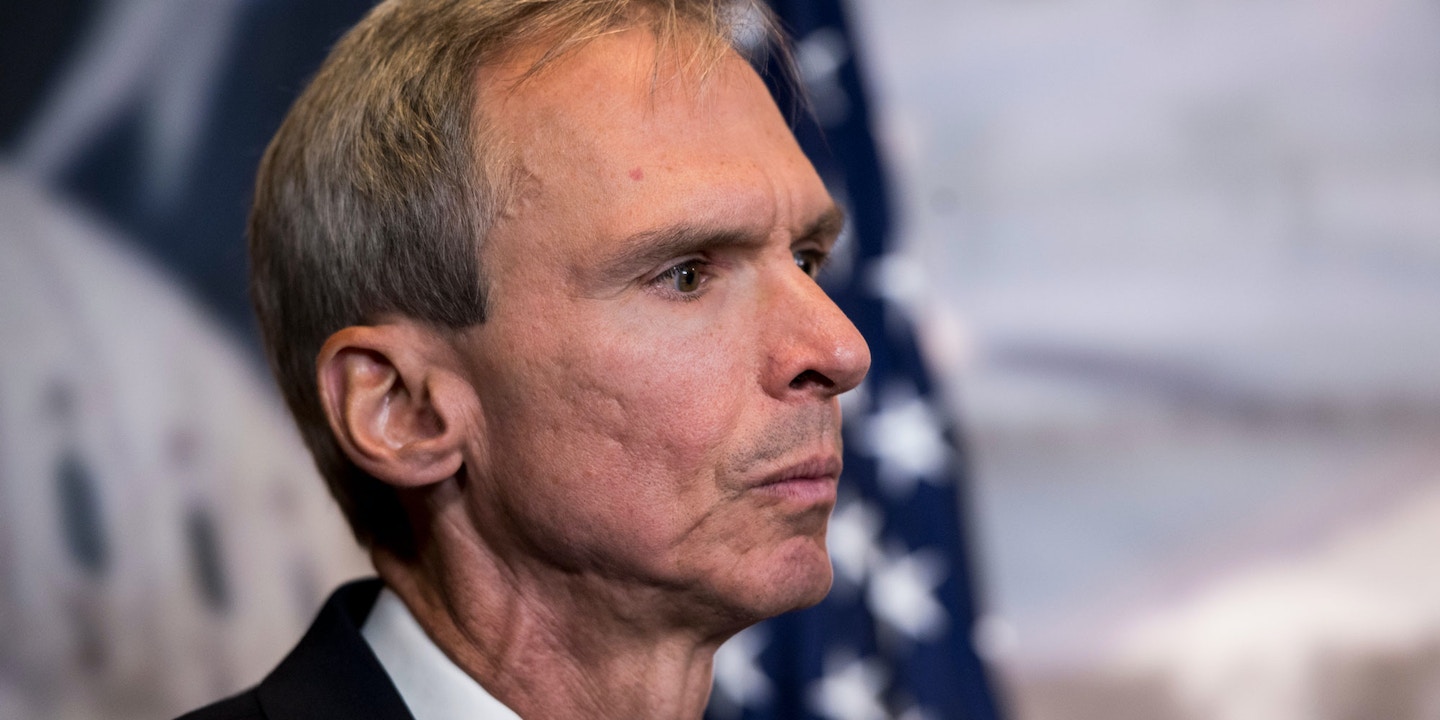 Earlier this year, Rep. Dan Lipinski, D-Ill., was facing a surprisingly robust primary challenge from Marie Newman, a progressive Democrat backed by some of the many constituencies that Lipinski has clashed with over the years. Lipinski represents a solidly Democratic seat, but has become one of the most conservative Democrats in the House, with his opposition to legal abortion and hostility toward marriage equality and immigration rights.

Eventually, Lipinski narrowly defeated Newman in the March 20 primary — thanks in part to support from the centrist political alliance No Labels. Lipinski is a member of the group’s House Problem Solvers Caucus, an informal collection of representative who work to, well, solve problems.

No Labels, which was formed in 2010 with a mission to promote centrism, focuses primarily on good governance and remains vague in terms of what policies it supports. The group takes an approach to politics based on the theory that both parties tend to cater to the extremes in primaries, and, if elected, those polarized members of Congress create dysfunction, government shutdowns, and the gridlock that sours the public on Washington. In addition to advocacy for bipartisanship, the group is turning to electoral politics, supporting moderates in races against what the group perceives to be ideologues who are farther afield in both parties. As part of its electoral efforts, No Labels pledged to raise $50 million to bolster candidates in the 2018 midterms.

One of the races that the group got involved in was the Chicago-area primary, spending roughly $1 million to back Lipinski over Newman, according to reports filed with the Federal Election Commission. (The spending was technically done through a Super PAC called United for Progress, under the umbrella of Country Forward, which is No Labels’ allied political entity.)

One of the things those funds went toward was an attack ad that questioned the legitimacy of an anti-bullying organization Newman set up, warned that she backed subsidies for foreign airlines, and even called her out for having fruit flies at her restaurant.

By spending so heavily to back the anti-LGBT Lipinski, No Labels crossed the line with some Democrats who were otherwise inclined to support the group, according to emails between the group’s founder and CEO Nancy Jacobson and two separate members of the group’s email distribution list. The list members wrote in their objections to Jacobson, who explained her rationale in exchanges that were subsequently obtained by The Intercept. (Asked to comment on one of the email exchanges, Jacobson told The Intercept, “This was a private email exchange with someone who is not a no labels supporter/backer – fortunately there are tens of millions of people across this country who are and understand the importance of our work.” A spokesperson for No Labels declined to comment on the rest of the exchanges reported on for this story.)

“Nancy,” wrote one critic to Jacobson, “I have admired what you were trying to do with NoLabels, but I think you made a big mistake in supporting Dan Lipinski.  Either you don’t fully appreciate how bad Dan is or you have decided to compromise too many Democratic values in the interest of compromise. I am fiscally responsible and socially liberal but I refuse to compromise on civil rights.”

A second No Labels list member wrote to Jacobson with a similar criticism. “Rather than pushing the Democratic party to appeal to a larger slice of America, you are in essence trying to create your own political party that includes people who don’t support [Deferred Action for Childhood Arrivals, an Obama-era program that shielded 800,000 immigrants from deportation], don’t support [the Affordable Care Act], don’t support a woman’s right to choose and don’t value LGBTQ rights,” the No Labels critic wrote to Jacobson. “One would wonder is there any issue too offensive that you would not welcome someone in your big tent? Would you welcome Jeanne Ives to your tent? What boundary do you draw that says someone is not a ‘problem solver’?” (Ives nearly won the GOP nomination for the 2018 Illinois governor’s race on a platform of extreme opposition to legal abortion.)

“I see a whole new crop of Democratic challengers—like Marie Newman—who see Bernie—WHO IS NOT EVEN A DEMOCRAT—as a model worthy of emulation.”

Jacobson replied with her reasoning for the group’s intervention, explaining that part of the opposition to Newman was related to her endorsement by Bernie Sanders, the independent senator from Vermont. “I see a whole new crop of Democratic challengers—like Marie Newman—who see Bernie—WHO IS NOT EVEN A DEMOCRAT—as a model worthy of emulation,” Jacobson wrote, all-caps in the original, denigrating Sanders for not labeling himself a Democrat. “But I don’t think we need more people in Congress on either side who rile up their bases and then actually achieve nothing.”

The complaints came as No Labels got involved in the 2018 midterm elections after a successful run in 2016 helping centrist candidates. In that cycle, the No Labels-allied group Country Forward went after former Rep. Tim Huelskamp, a firebrand Kansas Republican and former Freedom Caucus member, and knocked him out in a primary, helping to elect instead a less-extreme conservative in Roger Marshall. The group also worked against the wife of left-wing Rep. Alan Grayson, Dena Grayson, a Democrat from Florida, as well as his former senior staffer Susannah Randolph, helping to elect instead Darren Soto, a centrist Democrat.

The treasure chest the group is amassing will help it intervene in more races. According to the available information, No Labels draws its funding from super wealthy donors. The Illinois effort, according to the Chicago Sun-Times, was funded by Jerry Reinsdorf, the chair of the Chicago White Sox and Bulls, and a longtime friend of Lipinski’s father; Daniel Tierney of Wicklow Capital; Bud Selig, the former Major League Baseball Commissioner; and New Yorker Michael Sonnenfeldt of TIGER 21.

While the primary showed No Labels’s ability to raise funds, however, the scathing criticisms revealed that there was a cost to be paid for stepping on some Democrats’ third rails — and that the arguments the group uses to gloss over its candidates’ anti-LGBT and anti-choice views might not pass muster with even centrist liberals.

In her emails, Jacobson argued that Lipinski’s “private beliefs” on social issues should be set aside in pursuit of a more important consensus around opposition to Sanders on the one side and the tea party on the other:

I am very saddened that you feel this way about No Labels’ work in this race. I understand and respect your passion on LGBT issues. And I don’t happen to have the same view as Rep. Lipinski on LGBT or other social issues. But I don’t believe the greatest threat facing America is Dan Lipinski’s private beliefs on social issues—even if you or I might find those issues very important. I believe the greatest threat to our country is the growing intolerance in each of our parties, and the belief that our political opponents are not just wrong, but evil and treasonous. This is the brand of politics being espoused by Dan Lipinski’s opponent, Marie Newman, who was just endorsed by Bernie Sanders. I know people on the left see Bernie as a hero. But what I see is someone who has been in the House and Senate for almost 30 years and has almost no legislative record whatsoever because he has no interest at all in doing the hard work of governing.

(Between 1995 and 2007, when House Republicans controlled Congress, then-congressional representative Sanders passed more roll call amendments than any other member of Congress.)

Jacobson said she worried that a Lipinski loss could set off a domino effect that could lead to other incumbents being knocked out as well. “If Dan Lipinski loses, I am certain it will embolden the far left to try to knock out every last moderate and independent thinking Democrat left in Congress,” she wrote. “They are in effect, trying to do what the Tea Party has done to the Republicans over several elections. I think this would be a disaster.”

As former Obama speechwriter Jon Favreau pointed out on Twitter, the incumbent congressional representative’s right-wing positions are not necessarily “far left,” but rather at odds with the values cherished by the modern-day Democratic Party, and he champions them in a solidly Democratic district:

In addition to being pro-life, Dan Lipinski was the only Democrat in Congress to vote against the Affordable Care Act and opposes same-sex marriage. To call people who disagree with those positions the far left is a fucking embarrassment. https://t.co/7bpOCDl1dP

Jacobson, though, sees politics through a very different lens. A creature of the centrist upsurge within the Democratic Party in the 1980s and 1990s, she was introduced by former Senator and Indiana Gov. Evan Bayh to her now-husband, Democratic pollster Mark Penn, at a Democratic Leadership Council event. The DLC effectively acted as a counterweight to the progressive wing of the party, which centrists blamed for losses in the 1980s.

In response to the critic who argued that the Democratic Party should “appeal to a larger slice of America,” Jacobson reached back 30 years to make the case for her more conservative political approach. “Those of us that launched Bill Clintons first campaign will have to eventually find another big tent dem to ultimately save the party like we did in the early 90’s,” she wrote.

But dialogue, apparently, can only go so far. Jacobson solved her own problem with her disgruntled interlocutors by booting them from the No Labels email list. “The center must survive and to do so it needs a big tent,” she wrote to one. “It must be time to remove you from our list as we must diverge at this point.”

To the other she offered, “I will remove you from our lists – we most definitely don’t see it the same way.”