Danny Ray Thomas Was a Broken Man Who Needed Help. Instead He Was Gunned Down by a Cop in Broad Daylight.

Everyone should know his name.

Everyone should know the name and story of Danny Ray Thomas, but too few people do. Our national attention span for police brutality and racial violence has plummeted since the election of President Donald Trump. He has a way of completely sucking the wind out of the news cycle and much of mainstream media obliges — obsessing over his every move.

From 2014 to 2016, we reached a national crescendo — where the important names and stories of injustices, and the cities where they happened, were seen and known by the world. Over 3,500 people were killed by American police during that period, according to the website Killed by Police, which aggregates information about reported killings. In 2014, the nation came to know the stories of Mike Brown and Tamir Rice. In 2015, it was Freddie Gray and Sandra Bland. In 2016, it was Alton Sterling and Philando Castile.

Our national attention span for police brutality and racial violence has plummeted since Trump’s election.

But what about 2017? Of the 1,193 people killed by American police last year, according to Killed by Police, whose story do you know? When I ask this question of audiences around the country, most people struggle to name one person. Why is that? What happened? The brutality damn sure didn’t end.

Until police slaughtered 22-year-old Stephon Clark — an unarmed, nonviolent black man — in his own backyard in a hail of twenty bullets, could you name a single victim of police violence from 2018?

I’m not judging you. You don’t know these names and stories because they just aren’t being shared with the same force of previous years. But you need to find a place in your heart and mind to know the story of Danny Ray Thomas.

It’s a story of grief. It’s a story of the excessive consequences of mass incarceration. It’s a story of mental health. It’s a story of the criminalization of drug addiction in black communities. And, as far as I’m concerned, it’s a story of a police officer who cared so little about the story, the humanity, the pain, that he executed a broken man in broad daylight. The details I’m going to give you about this case — that Danny Ray Thomas was unarmed, that the cop had other ways to deal with it, and much more — make it hard to see this any other way. 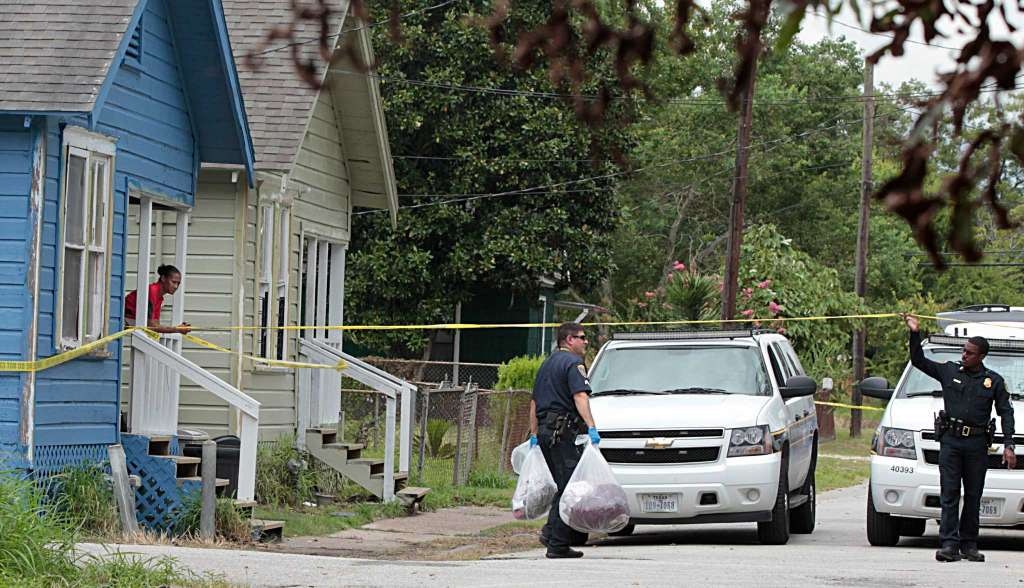 A Houston police officer caries bags of evidence after a local woman allegedly drowned her 7-year-old son and 5-year-old daughter, on Aug. 14, 2016, in Houston.

The crisis of mass incarceration does many things — chief among them is that it tears families apart. On August 12, 2016, Thomas, who was then 32 years old, was serving a three-year prison sentence in Bryan, Texas — over one hundred miles away from his kids in Houston. The man had lived a rough life and struggled with drug addiction. According to local news reports, he was sentenced to three years in prison not for a violent crime, not even for selling drugs, but for possession of PCP.

He needed rehab, diversion, and counseling. Instead, like hundreds of thousands of African-Americans, he was sent to prison. This isn’t how that situation goes down in affluent white communities across this country when parents or children struggle with drug addiction.

On Friday, August 12, 2016 — while Thomas was serving that outrageous sentence in prison — the unthinkable happened. His two children, 5-year-old Kayiana and her 7-year-old brother Araylon “Ray Ray” Thomas, named after his father, were killed. According to local news reports, their mother, 30-year-old Sheborah Thomas, invited the kids one by one into the bathroom and deliberately drowned them. Earlier that day, the kids had performed at a talent show.

Imagine now the pain of Danny Ray Thomas, far away from home, locked behind bars for simple drug possession.

After Sheborah Thomas allegedly killed the kids, she hid their lifeless bodies under her neighbor’s house and left them there for days until she told an acquaintance on Sunday. The acquaintance took her to a police station and flagged down an officer; Sheborah Thomas then confessed to the crime. She was charged with capital murder and is still in jail now, awaiting trial.

Imagine now the pain of Danny Ray Thomas, far away from home, locked behind bars for simple drug possession. Imagine getting the news that your babies were drowned to death. When it happened, Jason Clark, a spokesperson for the Texas Department of Criminal Justice, released a statement on how Thomas received the news: “As you can imagine, he’s pretty upset right now.”

I don’t how I’d wake up and push through life again if anyone killed my babies. But trying to imagine being in prison, and their deaths happening while I was away, is simply unthinkable. Those who knew Thomas, of course, said he struggled mightily in the wake of such a loss. How could he not?

His sister Marketa Thomas told reporters that she and her brother both struggled with mental illness and supported each other through it all the best way they knew how. “He had my back through everything. And he promised me he wouldn’t leave me, and he didn’t leave me,” she said. “Somebody took him from me.”

Last Thursday, in broad daylight, as onlookers filmed and even nervously laughed a little, Thomas appeared to be in the middle of a mental health emergency. Waddling through the street with his pants all the way down at his feet, his body moved, but his mind was somewhere else. He genuinely appeared lost, wandering to and fro aimlessly, walking with intention but going nowhere sensible.

It was a spectacle. Even if you didn’t know that the man wandering around with his pants at his feet had had his heart and soul ripped away, any sensible human being would’ve known that Thomas was a man in distress. He needed an ambulance. Instead, he got a cop.

(This video contains graphic images that some readers may find disturbing,)

#BREAKING Video obtained by the @HoustonChron shows the death of Danny Ray Thomas after he was shot by a Harris County deputy Thursday. No weapon was recovered at the scene, officials said. #hounews #breakingnews

That cop, Cameron Brewer, worked for the Harris County Sheriff’s Office and just happened to be in the area when he saw the disturbance Thomas was causing. Within 30 seconds, Thomas was shot and killed.

Danny Ray Thomas was completely unarmed. From what we can see in the videos of the encounter — only a few seconds of which are off-camera — it doesn’t appear that Thomas ever touched or threatened the officer.

What’s doubly disturbing is that the officer, as we so often hear, had a body camera, according to the Harris County Sheriff, but it was charging in his car. He also had a Taser, but chose not to use it; and he had been trained in how to deescalate a mental health crisis, but appeared to have forgotten that, too.

If America’s nurses were as nervous and easily frightened as our cops, and had the power to shoot people, our national murder rate would skyrocket overnight. Instead, those nurses, who see broken men like Thomas every hour of every single day, find a way to provide treatment without ever firing a single bullet.

Unarmed black men like Danny Ray Thomas and Stephon Clark received absolutely no patience from the officers who eventually shot and killed them, but watch the endless patience cops gave the man in another video posted to Twitter.

How in the world is the Parkland shooter, armed with an arsenal and having killed 17 people, alive, but Danny Ray Thomas is dead? How in the world is Dylann Roof, having slaughtered nine sweet souls at a church in Charleston, South Carolina, alive, but Stephon Clark couldn’t make it out of his own backyard after being suspected of vandalism?

Whatever crime he committed would’ve likely received a ticket or citation. Instead, he got the death penalty.

Waddling through those streets with his pants down, Danny Ray Thomas couldn’t have outrun a little old lady. He was a nuisance. Whatever crime he committed would’ve likely received a ticket or citation.

Instead, he got the death penalty. While the local sheriff, Ed Gonzalez, has expressed concern about the shooting by his deputy, concern is not justice. Concern is better than nothing, I suppose, but only slightly. That concern won’t bring this man’s life back.

Just as cops did with Stephon Clark, Deputy Cameron Brewer served as judge, jury, and executioner for Danny Ray Thomas. He faced no jury of his peers. He had no reasonable opportunity to defend himself. His misery is now over, but this was not suicide by cop. Danny Ray Thomas did not ask for this. He didn’t leave this earth on his own terms. As deeply wounded and broken of a man as he was, he had his entire life ahead to try to put the broken pieces back together again.

That’s what life, liberty, and the pursuit of happiness means. Danny Ray Thomas was denied all three.