Arizona’s teachers are paid pitifully. The money needed to compensate them better may be hidden in the state’s broad and deep tax exemptions. 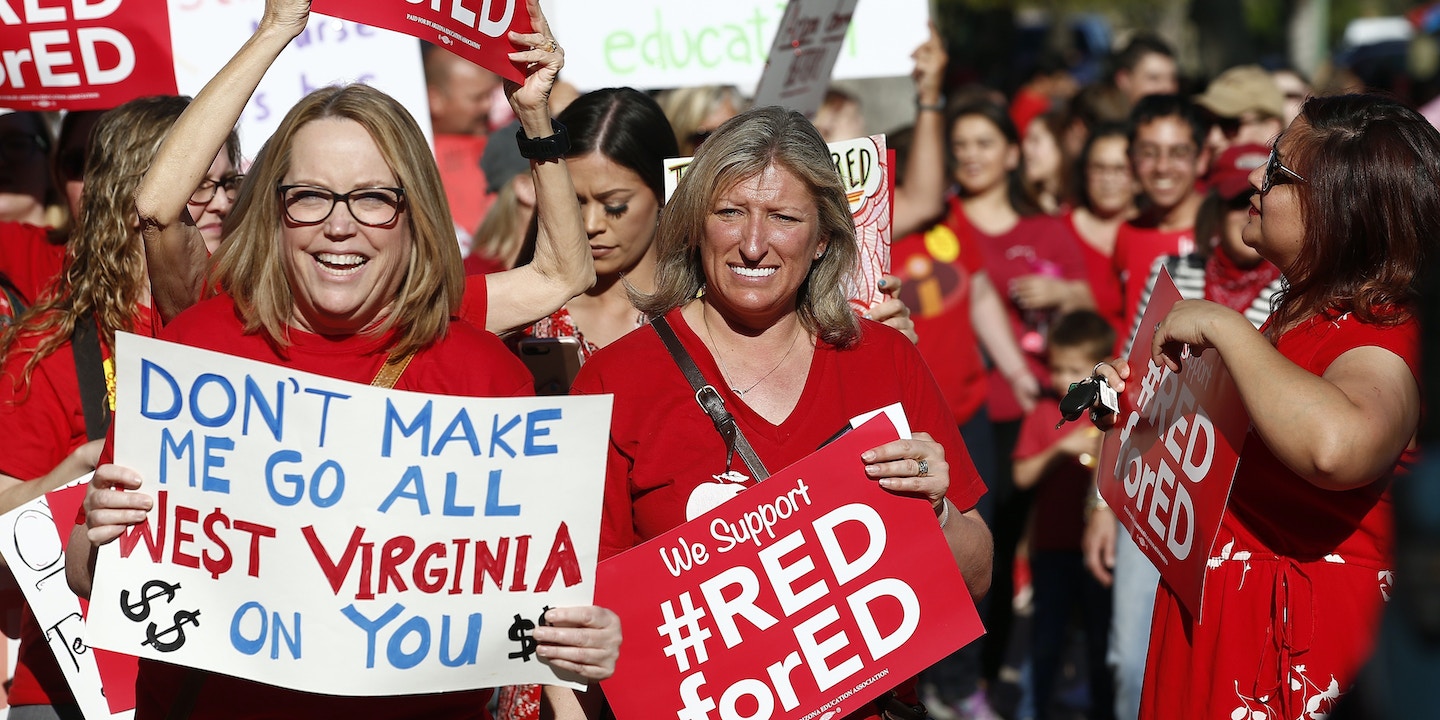 Arizona’s teachers, inspired by colleagues in states like West Virginia and Oklahoma, are staging protests aimed at pressuring the legislature and governor to increase school funding and annual salaries.

Amid talks of a potential strike, teachers started staging “walk-ins” last week, inviting community members to join them as they entered their schools and laid out their demands.

Arizona teachers are among the lowest paid teachers in the country; by some metrics, which factor in a cost-of-living adjustment, they’re ranked dead last. But it’s not because the state’s economy lacks the money: Arizona has slashed taxes in recent years, eliminating a source of revenue that could go toward hiking educators’ wages.

The state’s teachers are responding to this bottom-of-the-barrel pay by asking for a 20 percent salary increase and demanding that investment in public education be restored to pre-recession levels.

Arizona’s Republican governor, Doug Ducey, has rejected the teachers’ demands, claiming that raising teacher salaries by that much is just too expensive for the state. He has instead backed a 1 percent increase.

He also balked at a claim by local university researchers that Arizona’s elementary school teachers are the lowest paid of any state.

He instead insisted that Arizona is actually ranked 43rd in the nation for teacher pay.

Some teachers in the state have gotten second jobs in order to make ends meet, but last year, Republican state House Majority Leader John Allen said that was happening because educators wanted fancier lifestyles. “They’re making it out as if anybody who has a second job is struggling. That’s not why many people take a second job,” he said. “They want to increase their lifestyles. They want to improve themselves. They want to pay for a boat. They want a bigger house.”

Days earlier, he had said, “The idea that we are somehow torturing somebody if they have a second job is just ridiculous,” the Arizona Capitol Times reported. “And [teachers] have a long summer. What a great opportunity for people like us and teachers to go out and get a second job. Let’s all get a second job this summer.”

A 20 percent salary increase is estimated to cost something in the neighborhood of $680 million — a sizable sum of money for a state budget.

But, according to the Arizona Center for Economic Progress, a local think tank, the pay raise could be covered by reversing a series of corporate tax cuts, enacted in the years following the Great Recession, which have dramatically reduced the state’s revenue from business.

The think tank’s director, David Lujan, previously served in both the state House and Senate, and has been involved in Arizona public policy for 20 years. According to Lujan, Arizona is unable to pay teachers adequately because the state’s fixation on cutting taxes has left its coffers empty.

“Arizona has cut taxes every single year since 1990. And that adds up, when you adjust to inflation, to $4.4 billion in reduced revenue,” he explained to The Intercept. In the think tank’s view, some of these corporate tax breaks go too far, and rolling some of them back would help create necessary revenue to fund education and other priorities.

Proponents of these cuts argued that they would grow the economy, but Lujan is not convinced.

“I served in the Arizona legislature eight years myself, and I was on staff a few years before that. I’ve been around for pretty much all of those tax cuts going back since 1990, and I think, in almost every instance, the proponents of those tax cuts would say that those tax cuts were needed to bring jobs into our state, to grow the economy,” he said.  “I think most people would say many of those promises are not being delivered, because our economy, compared to most other states, is below the national average on a lot of economic indicators.”

In addition to the diminishing corporate tax rate, the state’s budget is constrained by a tax code full of specialized tax exemptions.” Arizona allowed more than $13.5 billion in taxes to go uncollected in fiscal year 2017, thanks to a litany of exemptions, deductions, allowances, exclusions or credits,” explained Jim Small, in a report for the Arizona Center for Investigative Reporting that was published the first week of April.

Arizona’s version of the state sales tax is called the transaction privilege tax, or TPT. Under current law, a wide range of services are granted exemptions from the TPT.

Small found that in fiscal year 2017, “$12 billion was excluded from TPT collections, almost half of which was due to services being exempted.”

“Anything that’s not tangible, any kind of a service — whether it’s lawyers, whether it’s your accountant — you don’t pay taxes on the actual services they provide,” Small told The Intercept. “That’s kind of like the rule of thumb we have: Any kind of service, anything you’re paying someone else to do, there is no sales tax that gets applied to it.”

Ending TPT exemptions altogether would be a sharp change to the state’s business climate and could conceivably have negative economic consequences. Business owners argue that the elimination of such tax exemptions would merely pass on higher costs to consumers.

The problem for teachers is that Arizona is one of a number of states that requires a legislative supermajority to increase taxes, making it difficult to claw back tax exemptions, let alone raise rates.

“We have a constitutional provision which says, to cut taxes it only requires a simple majority of the legislature, but to raise taxes or to reverse a tax cut it takes a two-thirds vote of the legislature, a supermajority. And so, that has proven to be pretty difficult, if not impossible, to do through our legislature,” Lujan said. Consequently, the most “viable” way to increase taxes or reverse tax cuts, according to Lujan, “is through the ballot.”

Such changes require only a simple majority of votes through Arizona’s ballot referendum system.

Last year, a group of former business leaders, fed up with the state of Arizona’s schools, announced a ballot drive to place a 1.5-cent sales tax dedicated to education on the state’s 2020 ballot if the legislature does not act.

As of last December, a draft of the referendum included raising $340 million for increasing teacher pay and $190 million to support the state’s higher education system. “Anything less than 1.5 cents is unacceptable if we are truly committed to Arizona’s economic future,” former PetSmart CEO Phil Francis, who is heading up the coalition, said at that time.

Arizona’s school funding woes are perhaps a microcosm of what has happened nationally since the Great Recession. A report by the Center for Budget and Policy Priorities analyzed the national school funding picture and found that “twenty-nine states provided less overall state funding per student in the 2015 school year (the most recent year available) than in the 2008 school year, before the recession took hold.”