A North Carolina congressional candidate released an attack ad about his opponent titled, “Walter Jones: Paid for by George Soros.” 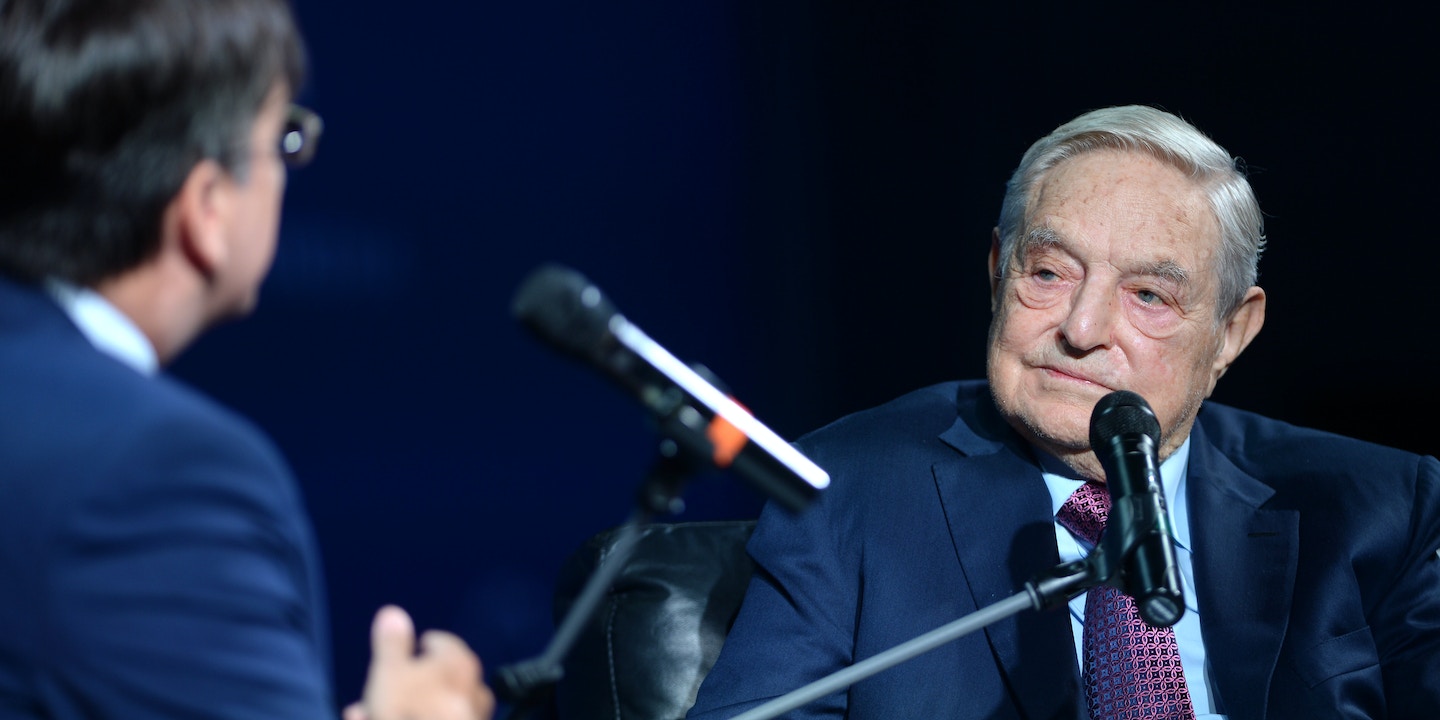 In an unexpected turn of events, financier and liberal megadonor George Soros has become an issue in a congressional primary in North Carolina — as the subject of an incredibly misleading attack ad from a GOP primary challenger trying to replace an independent-minded Republican congressperson.

Normally, Soros is invoked as a boogeyman by right-wing politicians and activists in political debates with their liberal counterparts.

But the member of Congress who is coming under fire for alleged Soros ties is not a Democrat, but rather a southern Republican who, in 2016, was honored by the American Conservative Union for his conservative voting record: North Carolina Rep. Walter Jones.

It’s true that Jones has adopted some moderate positions, showing himself to be an independent thinker in his caucus. He was the only House Republican not in a blue state or swing district to oppose both the GOP tax and health care plans. He supported Democratic regulation of Wall Street, and he is very anti-war.

Because of that, Jones is facing a primary challenge from two Republicans. One of them, Craven County commissioner and lobbyist Scott Dacey, aired an ad titled “Walter Jones: Paid for by George Soros.”

The ad claims that Soros and his son Jonathan “fund every radical liberal cause, from banning guns to impeaching President Trump. And the politicians they bankroll, they’re all Democrats, except one: Walter Jones.” It goes on to insinuate Jones has received $80,000 from the Soros clan.

In an accompanying press release, the Dacey campaign alleged that Jones has accepted “over $80,000 in George Soros-backed campaign contributions.”

Friends of Democracy is a Super PAC that was launched by Jonathan Soros (his father, George, has nothing to do with it). Its mission was to support members of Congress who support campaign finance reform — in other words, limiting the very same kind of influence conservatives fear that wealthy donors like the Soros family has. It was later merged into Every Voice, which continues similar work on reforming the campaign finance system.

Friends of Democracy had highlighted Jones because he is one of the few Republicans in Congress that supports campaign finance reforms, such as enacting public financing for federal campaigns. So, it’s fair to say that Jonathan Soros’s PAC did encourage donors to give to Jones at one point.

But the reality is that neither Jonathan nor George Soros has personally given money to Jones at any point in his congressional career — contrary to what the attack ad, titled “Walter Jones: Paid for by George Soros,” clearly implies.

Ryan Kane, a spokesperson for Dacey, conceded that point in an interview with The Intercept. “I mean, yes, perhaps there was no direct — there may have been no direct link, or no direct donation [from the Soros family],” he said. In order to try to forge the connection between Jones and the Soroses, Kane pointed to a 2014 Politico article in which the younger Soros highlighted Jones as a Republican willing to back campaign finance reforms.

But the Soros family is never shy about giving directly and heavily to a candidate when it wants to. It has openly spent millions backing candidates like Larry Krasner, who was elected as Philadelphia’s district attorney in November.

And if Jones is doing George Soros’s bidding, it would be hard to tell. The attack ad notes Soros’s support for gun control, for instance, but it does not mention that Jones has earned an “A” rating from the National Rifle Association, having opposed virtually all gun control measures.

The Dacey campaign claims that the $80,000 is “Soros-backed” because the payments were processed through Democracy Engine, which is a payment processing service that was, at one point, used by Friends of Democracy.

Although Democracy Engine works with some progressive groups, it is billed as nonpartisan. The $80,000 was given by individual donors, none of whom happen to be named George or Jonathan Soros.

In a statement to the media, the Jones campaign itself seemed to be unaware of who owns and operates Democracy Engine, which the campaign said it used as part of an arrangement with NationBuilder, a platform that operates campaign infrastructure.

“In fact, the $80,000 referenced was contributions from individual citizens who did nothing more than use their credit cards as a form of payment,” Jones spokesperson Doug Raymond said. “Unbeknownst to the Jones campaign, the company used to process credit card payments on their website is owned by George Soros.”

Actually, Democracy Engine is not owned by Soros, even if it was used to process payments by both Friends of Democracy and the Jones campaign through NationBuilder.

Democracy Engine CEO and majority owner Jonathan Zucker declined to comment on the relationship with the Jones campaign, but told The Intercept that Friends of Democracy is not a client for the company this cycle, and that a page on the organization’s website about Jones should have been deactivated after the 2016 election cycle. After we called it to his attention, Democracy Engine deactivated the page.

“Democracy Engine is a donation processing platform.  We have no ties to George Soros.  The closest tie we could possibly have is if some entity to which Soros contributed were to process donations through our system (we handle processing for several thousand political candidates and nonprofits),” he wrote in an email.

But there was one single Friends of Democracy donation given to Jones this year.

The Jones campaign, after looking at its internal records, noted that the only donation it received through the Friends of Democracy website during this campaign occurred on April 8, 2018. It was a total of $1, and it came from Kane, the spokesperson for Jones’s challenger Dacey.

The ad started running a few days later on April 10.

“To deliberately make a $1 donation to my campaign in an attempt to entrap me has to be the lowest political trick I’ve ever seen,” Jones said in a statement.  “It is further proof that Scott Dacey will do anything to try to get votes.”

The Jones campaign campaign has sent a cease and desist letter to the Dacey campaign to try and get the ad removed from the airwaves.

Update: April 12, 2018, 1:35 p.m.
This story was updated to include a comment from Laura Friedenbach, an Every Voice spokesperson.