On Monday night, activists blasted the message “There’s a Rapist in the White House” onto the exterior of the Trump International Hotel in Washington, D.C. 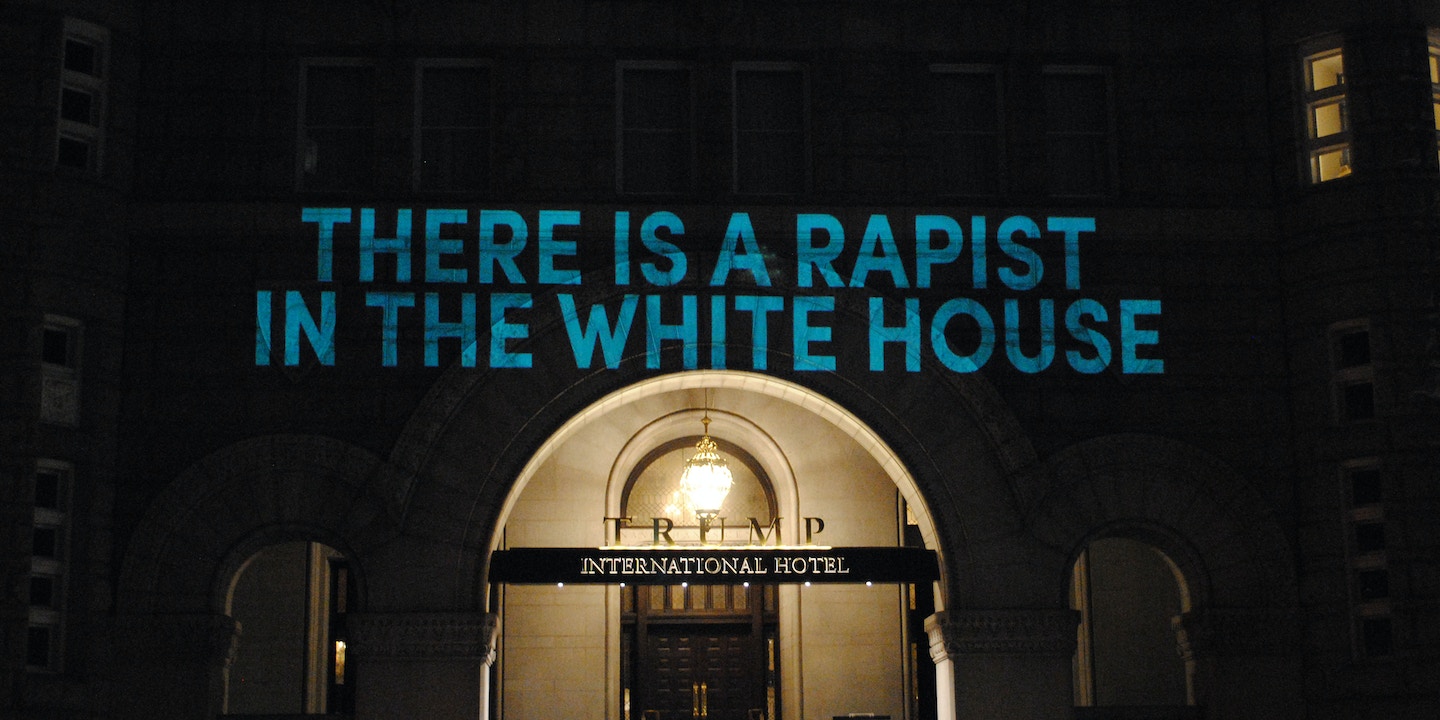 At least 20 women have accused President Donald Trump of sexual assault, but the national media, chasing scandal after scandal from the White House, has largely moved on from the story. At a gathering outside the Trump International Hotel last night in Washington, D.C., a small crowd of activists organized by the progressive social network Care2 aimed to resurrect the conversation.

“There’s a Rapist in the White House.”

“Trump is a Serial Sexual Assaulter.”

These messages, projected with the help of multimedia artist Robin Bell and the Illuminators, displayed one after another on the side of Trump’s grand hotel, which occupies D.C.’s historic Old Post Office building. (Last year, The Intercept’s parent company, Field of Vision, partnered with Bell to project “Best of Luck With the Wall” onto Customs and Border Protection headquarters in Washington.) Care2 also blasted the demonstration live to its 1.6 million followers on Facebook.

One of the women who has accused the president of sexual assault is Jessica Leeds, 75, who says the president had tried to feel her breasts and put his hand up her skirt while they were riding an airplane together in the early 1980s. Another accuser is Rachel Crooks, 35, who says that Trump had started kissing her without her consent when she worked as a receptionist in Trump Tower when she was 22.

Trump has characterized the allegations against him as “completely false” and “100% fabricated.”

Nothing ever happened with any of these women. Totally made up nonsense to steal the election. Nobody has more respect for women than me!

A woman I don’t know and, to the best of my knowledge, never met, is on the FRONT PAGE of the Fake News Washington Post saying I kissed her (for two minutes yet) in the lobby of Trump Tower 12 years ago. Never happened! Who would do this in a public space with live security......

....cameras running. Another False Accusation. Why doesn’t @washingtonpost report the story of the women taking money to make up stories about me? One had her home mortgage paid off. Only @FoxNews so reported...doesn’t fit the Mainstream Media narrative.

In 2016, President Barack Obama declared April as “National Sexual Assault Awareness and Prevention Month.” Trump, who famously once bragged about grabbing women “by the pussy,” has continued the tradition.

“Sexual assault crimes remain tragically common in our society, and offenders too often evade accountability,” Trump said in a trollish presidential proclamation late last month. “These heinous crimes are committed indiscriminately: in intimate relationships, in public spaces, and in the workplace.”

Trump’s statement went further, saying that his administration “is committed to raising awareness about sexual assault and to empowering victims to identify perpetrators so that they can be held accountable.”

Care2 organizers said they planned their Monday night demonstration to “honor the survivors of Trump’s predatory behaviors” and remind the world that “there is a morally unfit rapist in the White House” who needs to be “evict[ed] once and for all.” More than 343,000 people have signed Care2’s online petition calling for Trump’s impeachment.

Carrie Saracini, an organizer with Care2, told The Intercept that one of the group’s main goals is to make sure that people remember not that Trump has “said terrible things about various many different topics — he’s actually a predator.”

Activists project a message on the side of the Trump International Hotel in Washington, DC on April 16.

Jen, a 22-year-old Brooklyn College student who was passing through Washington, D.C. on Monday night, said she’s used to seeing lots of anti-Trump organizing in New York City, but was “shocked in a good way” by the projection. “There’s not a lie up there,” said Jen, who asked to be identified only by her first name.

Crooks, Leeds, and another accuser, Samantha Holvey, came forward in December to pressure Congress to start an investigation into the allegations against the president. In turn, Sens. Kirsten Gillibrand, Cory Booker, and Bernie Sanders — all likely candidates for the 2020 presidential election — as well as Sens. Ron Wyden and Jeff Merkley have all called for Trump’s resignation. Some senators have also voiced their support for launching a congressional investigation into the sexual assault allegations, but so far nothing formal has launched.

Gillibrand, in February on “60 Minutes,” said that if Trump is unwilling to resign over the allegations, then Congress should hold him accountable. “We’re obligated to have hearings,” she said.

In December, Merkley said on CNN that he’d like to see a congressional hearing dedicated to the sexual assault accusations. “If there’s not,” he added, “if Republicans are unwilling to have this conversation about the president, then we should hold a shadow hearing with the Democratic caucus.”

A Quinnipiac University poll at the end of 2017 found that 70 percent of respondents believed that Congress should investigate the sexual assault accusations.

Top photo: Activists project a message on the side of the Trump International Hotel in Washington, DC on April 16.