The Restaurant Industry Ran a Private Poll on the Minimum Wage. It Did Not Go Well for Them.

The restaurant industry’s own internal survey found huge support for raising the minimum wage, even if it meant a higher check. One of the nation’s most powerful anti-minimum wage lobbying groups tapped a longtime Republican pollster to survey the public about a range of issues impacting the industry.

A significant chunk of the survey focused on attitudes toward the minimum wage — and many members of the powerful lobby group aren’t going to like the results.

The poll — which was presented on a slide deck obtained by The Intercept and Documented — found that seven in 10 Americans want to see the minimum wage raised even if it means that they’d have to pay more for meals. It also found that the industry’s various talking points against raising the wage are mostly falling flat with the general public.

Conducted by GOP pollster Frank Luntz’s firm LuntzGlobal on behalf of the other NRA — the National Restaurant Association — the poll found that 71 percent of people surveyed support raising the minimum wage to at least $10 an hour. The NRA, which did not respond to a request for comment, is the trade association for the massive restaurant industry. It has estimated that restaurant sales reached $799 billion in 2017, up 4.3 percent over 2016, and boasts eight years of consecutive growth in revenue for U.S. restaurants.

“The restaurant industry now in the United States is larger than 90 percent of the world economies,” said Hudson Riehle, senior vice president of the NRA’s Research and Knowledge group.

The NRA paid its CEO, Dawn Sweeney, more than $3.8 million in total compensation, including a bonus of $1.7 million. If her total compensation were computed hourly, it would amount to $1,867.88 per hour (as of four years ago), which would take a minimum-wage worker 247 hours, or six weeks of full-time work, to earn.

The NRA has long claimed that increasing the government wage floor would “ratchet up restaurants’ labor costs and result in thousands of jobs lost,” but these results show that the NRA’s rhetoric on the minimum wage is failing to move the American public. Indeed, as Democrats embrace a $15 per hour minimum wage ahead of the 2020 presidential campaign, the NRA is moving in the opposite direction.

The leaked NRA poll is the first instance of a known national poll commissioned by the industry itself that shows how widely popular raising the minimum wage is and how small the opposition is, even though other published national surveys have shown a similar level of public support.

The leaked poll also sheds new light on arguments the NRA has made through its local proxies in its campaigns against raising the minimum wage.

One of the arguments routinely made by industry representatives is that raising the minimum wage will raise the costs for customers.  But, the NRA’s own poll shows that, by an overwhelming majority, customers are willing to pay more to support a “fair wage.”

In the words of LuntzGlobal: “They want the INCREASE in spite of the costs.” 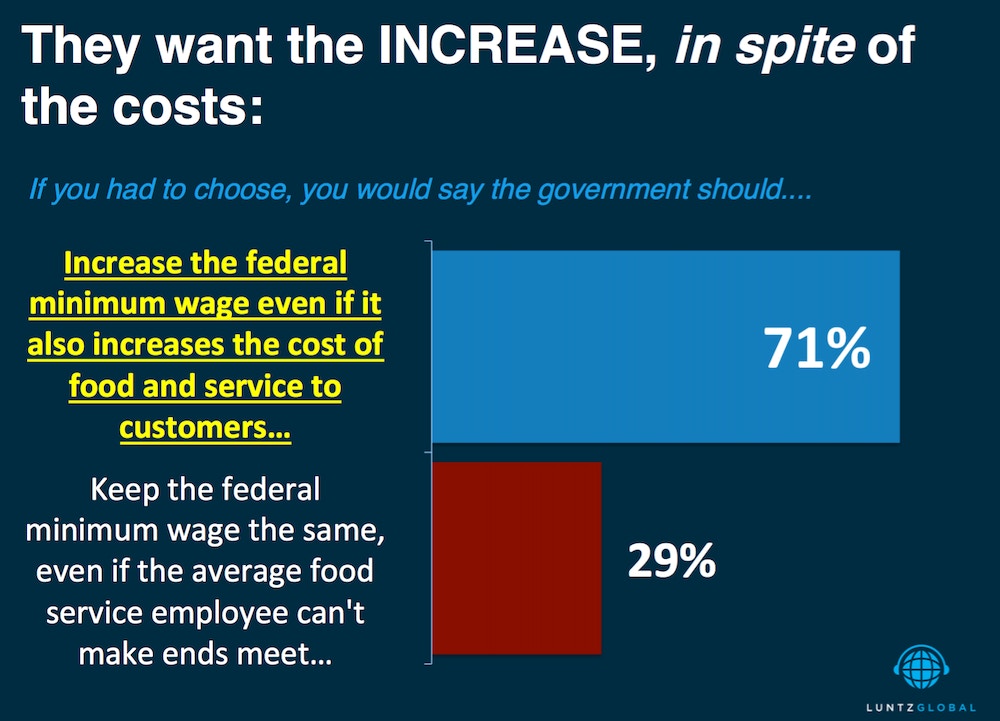 The pollsters asked, “If you had to choose, you would say the government should increase the federal minimum wage even if it also increases the cost of food and services to customers.”

According to the poll results, same portion of people who favor raising the minimum wage are willing to pay more to make it happen: 71 percent.

A small minority of those surveyed don’t care: Twenty-nine percent told the Luntz pollsters that they would not support raising the minimum wage “even if the average food service employee cannot make ends meet.” Twenty-nine percent of respondents also said they were most concerned about cost increases.

The poll did not include information on political party identification of the survey respondents, but it was stratified demographically and geographically.

That is, the NRA’s argument disregards its own survey results that customers are willing to pay higher costs to support a higher wage for their neighbors.

The strongest polling message in the poll was on standard of living: “A minimum wage increase will improve people’s standard-of-living by providing them with a more appropriate income level to handle cost of living increases.”

In the poll, 43 percent found that to be the most persuasive message, followed by the finding that raising the minimum wage would help lift nearly 17 million Americans out of the poverty level despite working full-time.

Another strong argument, according to the leaked poll, was that the raise is needed to help with increases in the cost of living, because the federal minimum wage “has only risen three times in the past three decades.”

The least persuasive argument was “reducing inequality” in general, which prompted the Luntz group to proclaim: “Let your OPPONENTS ‘own’ inequality if they must …”

The leaked poll also showcased arguments the NRA uses to pivot away from efforts to raise wages, changing the subject to things like the claim that “reducing taxes” would give workers more take-home pay, or that “increasing funding” for health care benefits would be a better alternative. 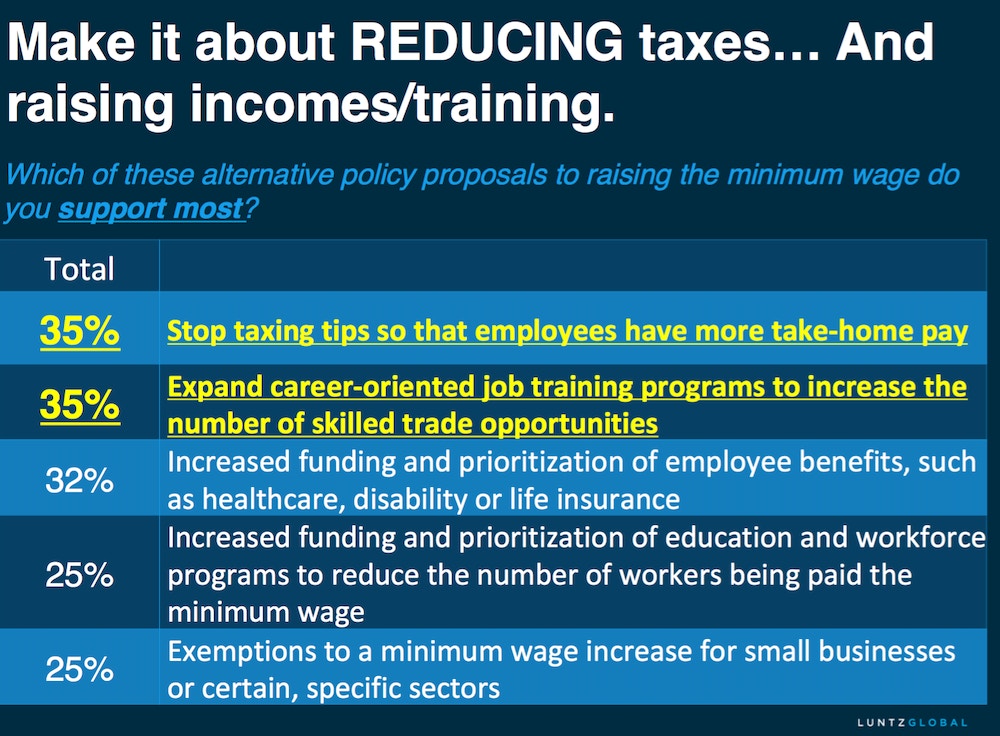 The LuntzGlobal polling shows that the biggest concern among Democrats and “swing” voters is “ensuring that American workers have access to quality, affordable heath care,” by 51 percent and 43 percent, respectively.

For Republicans, that was also high priority, but it came in a close second to “protecting American workers by changing immigration policy,” at 33 percent and 29 percent, respectively. (Other parts of the leaked poll and slide deck did not specify support by political party.)

Yet, the NRA has also joined GOP efforts against the Affordable Care Act and supported efforts to repeal it, in addition to its PAC supporting GOP candidates who had campaigned on repeal.

The leaked poll is similar to a poll the Washington Post obtained in 2016, which showed how LuntzGlobal was working with the Council of State Chambers to aid its opposition to minimum wage increases, paid sick leave, and other benefits.

That poll of 1,000 business executives showed that overwhelming majorities supported those measures, but their trade group continued to oppose those legislative proposals or referenda. (The Center of Media and Democracy, which was led by one of the authors of this piece, Lisa Graves, broke that story with the Washington Post.)

According the LuntzGlobal, the NRA message against raising the minimum wage that tested the best was the claim that

Businesses will close. Let’s be clear about who makes up the majority of the restaurant industry: It’s small businesses and locally owned franchises. They operate with razor-thin margins already. The sad reality is that with a higher minimum wage, many would simply no longer be viable; they’d have to lay off employees or shut their doors entirely.

However, in-depth analysis has shown that despite such fearmongering, raises have not resulted in “many” restaurants closing or laying off workers. The most comprehensive study to date, looking at 137 different hikes in the minimum wage, found:

For these 137 minimum wage increases, which have a mean real increase of 10.2%, we find a very clear indication that there was a reduction in the number of workers reporting a wage below the new minimum. … However, we also find a clear increase in the number of jobs paying at or above the new minimum, leaving total employment essentially unchanged. Our baseline specification shows that in the five years following the minimum wage increase, average wages of affected workers rose by 7.0%, while employment of affected workers rose by a statistically insignificant 3.0%.

Heading Off Measures on Obesity, Immigration, and More

The newly leaked poll also provides the NRA with data on how to avoid popular local measures to require nutrition information on menus to help combat obesity, as well as information on customers’ views about immigration and workers with past criminal convictions.

The LuntzGlobal messaging also uses language to emphasize the claim that most minimum wage workers are teenagers, a claim that the Economic Policy Institute has debunked. It also echoes the rhetoric around these issues being pushed by Rick Berman, an industry-funded PR executive whose sales pitch to corporations on opposing the minimum wage was published by Documented in partnership with The Intercept in December.

Women workers are disproportionally affected by the low minimum wage, according to the National Women’s Law Center, which says that nearly “two-thirds of minimum wage workers in the United States are women, and the minimum wage falls far short of what it takes to live above the poverty line.”

Former GOP presidential candidate Herman Cain once served as the organization’s president, and his role there came under scrutiny during his 2012 presidential bid.