The Republican candidate in Arizona’s special election gets a lot of help writing bills. 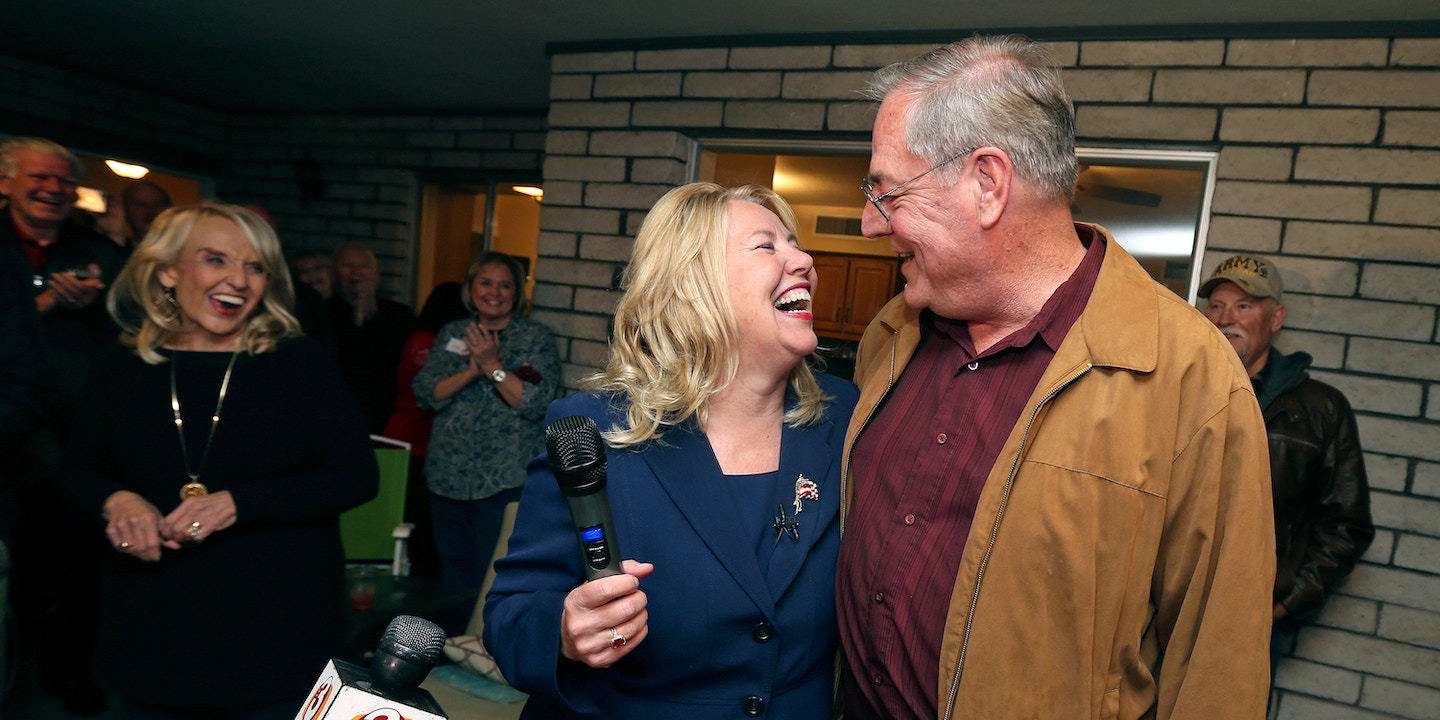 Debbie Lesko, the Republican candidate for Tuesday’s special election to Arizona’s 8th Congressional District, cut her teeth in the state legislature, where she has long served as the point person for corporate lobbyists to shape public policy. Lesko’s work attending to corporate interests was mainly carried out through her position as a senior member of the American Legislative Exchange Council, also known as ALEC.

ALEC, a nonprofit based in Washington, D.C., has come under increasing scrutiny in recent years for its outsized role in helping businesses and other interest groups to covertly craft public policy in states across the country. Lobbyists for corporate interests pay a hefty membership fee to join ALEC and then help to author “model” legislation. The aim is that a legislator member of ALEC will then introduce text closely resembling — or sometimes directly copied from — the model as legislation.

One ALEC model bill produced in 2013 suggested language to demand that the state produce a handbook to educate parents about so-called school choice. “The catalogue shall describe the educational choices available to students in the state,” said the second section of ALEC’s model, “including but not limited to {as applicable} open enrollment, charter schools, private schools, homeschooling, tuition tax credit scholarships, vouchers, and education savings accounts.”

Lesko served six years in the Arizona House of Representatives before moving to the state Senate in 2015. But she resigned her Senate seat in January to focus on her bid for the vacancy opened up by former Rep. Trent Franks, R-Ariz., who resigned in disgrace following claims that he was sexually harassing his staff members.

In her bid for Congress, Lesko has put forward an image revolving largely around red-meat conservative issues — touting her support for building a wall on the border, unfettered gun rights, and restrictions on abortion. Her first TV advertisement, calling for urgent action to stop illegal immigration, is nearly identical to scores of other candidates running as Republicans in recent years.

Lesko’s actual policy record, however, dovetails closely with the more conventional corporate power players in Arizona and the nation. In 2011, then serving as the majority whip in the state House, Lesko rounded up votes to slash the state corporate income tax, a decision that left the state starved of revenue without the promised economic stimulus.

Lesko has also courted powerful energy and utility interests in Arizona. In 2016, she admitted to reporters that she had sponsored a measure — in consultation with utility interests in the state — that would have allowed electric utilities to charge higher rates to customers who generate their own electricity through rooftop solar panels. In 2012, when ALEC faced heightened scrutiny for unethical ties with lawmakers, a lobbyist for the Salt River Project, an energy utility company in Arizona, organized an effort to respond to the controversy.

“Debbie Lesko and other ALEC legislative members both present and past would like to invite you to a meeting this Thurs. (April 26th), 11:00am at AGC to get the latest update on the fight that ALEC is waging in the media against its detractors,” wrote the lobbyist, according to a leaked email.

Lesko’s work through ALEC has helped her produce a steady stream of other interest group-authored bills. ALEC, for instance, has worked closely with for-profit charter schools to develop a range of model bills to help channel taxpayer money from public schools into proprietary charters schools. The largest names in the for-profit primary education industry, such as “virtual charter school” operators K12 Inc. and Connections Academy, have sponsored ALEC conferences and helped to author these charter-expansion bills.

These companies’ influence can be seen in Arizona through bills like the one sponsored by Lesko in 2013. SB 1285, a bill to require the state to mail a handbook to the parents of every pupil in the state informing them that they could instead enroll their students in taxpayer-funded charter schools and other private education options. The bill is nearly identical to the “School Choice Directory Act” model bill proposed by ALEC that same year.

Lesko has worked openly with ALEC to sponsor a range of other charter expansion efforts and other policy measures to expand public funding for private education. Last year, Education Secretary Betsy DeVos shared the stage with Lesko at ALEC’s policy conference and thanked the Arizona legislator for being a champion of “school choice.”

Not only is Lesko an ALEC board member, but she was also recognized as ALEC’s lawmaker of the year in 2016.

Legislative archives show bill after bill sponsored by Lesko plucked from ALEC’s assortment of model legislation. ALEC, for instance, proposed the Health Freedom Compact Act, a bill designed to undermine the Affordable Care Act that would also allow states to channel money from other federal health care programs, including Medicare, into programs unrelated to health care. Lesko’s bill in 2014, HB 2509, is a virtual carbon copy of the same health compact idea. Another ALEC bill — a resolution affirming the 10th Amendment to the Constitution that was viewed widely as a political protest against proposed Obama administration regulations — closely resembles a similar resolution proposed by Lesko.

Lesko’s campaign did not respond to a request for comment.

Not only is Lesko an ALEC board member and frequent speaker at the group’s events, but she was also recognized as ALEC’s lawmaker of the year in 2016. She appeared on television once to defend the organization from critics who said the group provides a backdoor channel for special interests to exercise influence over legislators.

Her support for ALEC goes even beyond sponsoring legislation. In October 2016, Lesko sent an email from her private account asking lobbyists and other corporate donors to help pay the expenses for other legislators hoping to travel to Washington, D.C., to attend an ALEC conference. “We are short on ALEC scholarship funds to help send legislators to ALEC. Can your firm and your clients help fund the AZ ALEC scholarship fund so we can make sure that AZ legislators can attend? Each legislator will cost approx. $2,500,” she wrote.