Republicans Have Found a Nuclear Option to Kill Regulations

Republicans’ new interpretation of the Congressional Review Act could endanger thousands of regulations that industries dislike. 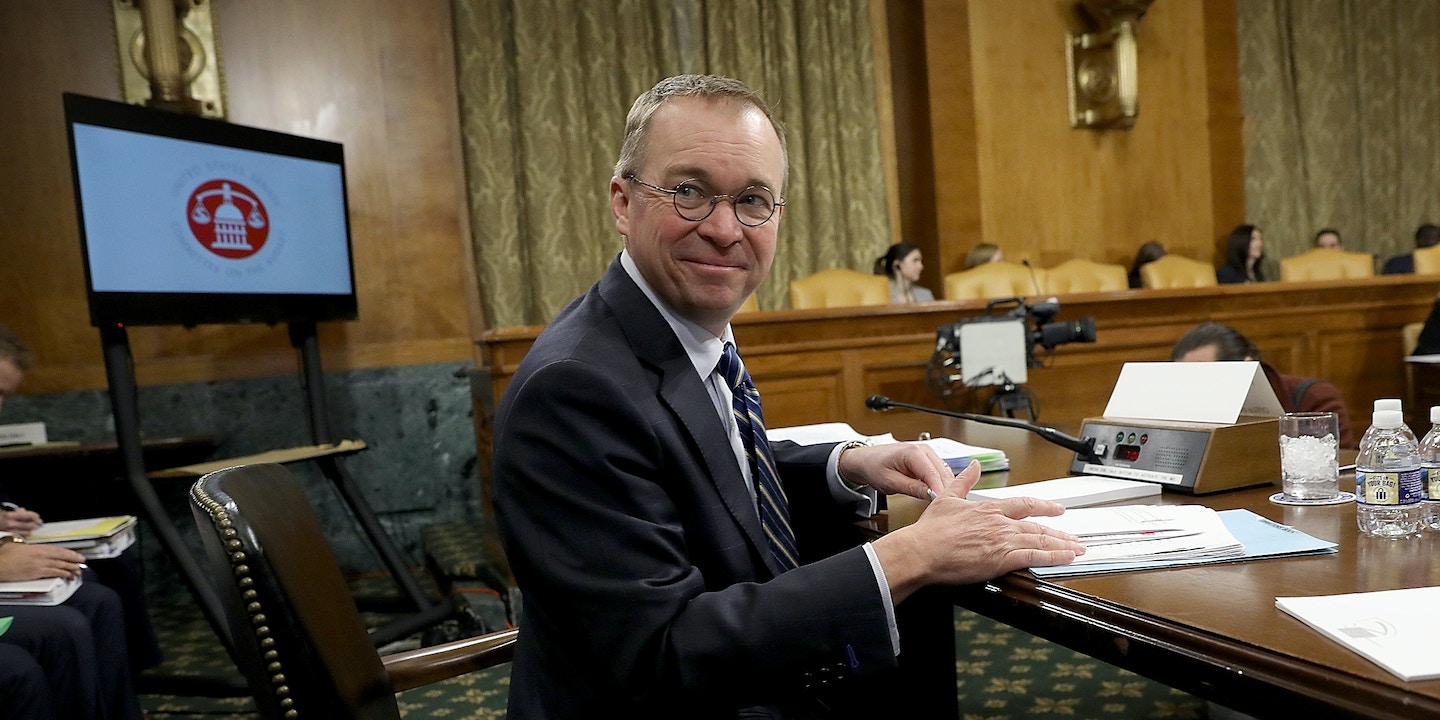 Mick Mulvaney, since November the acting head of the Consumer Financial Protection Bureau, could have killed an Obama-era directive cracking down on discriminatory lending on auto sales with a snap of his fingers. In 2013, the new bureau put auto dealers and the finance companies they work with on notice: We have found evidence that auto loans are often marked up for Latino and African-American customers, and will be monitoring your compliance with fair lending laws. Study after study had shown that people of color typically pay higher fees and higher interest rates on car loans than whites with similar credit profiles. The CFPB didn’t wait to create a formal rule, instead issuing a “guidance” bulletin. Mulvaney could have undone that guidance simply by writing his own. But that wasn’t enough for Mulvaney, who, as a member of Congress, had sponsored a bill to eliminate the bureau entirely.

Instead, on Wednesday, the Senate took action, voting 51-47 to overturn the guidance.

When Congress strikes down an agency action, the consequences are far more permanent. “Once Congress passes a resolution disapproving of something like this, the agency is prohibited from ever doing anything substantially similar,” said Debbie Goldstein, who oversees federal policy at the Center for Responsible Lending. If passed by the House and signed by President Donald Trump, Goldstein said, “This would tie the hands of future CFPBs.”

The Senate vote was also the test launch for a new, potentially lethal weapon that could be used to blast into oblivion a wide range of regulations that industries do not like. “Agencies probably issue a thousand binding regulations in a year. Maybe a couple of thousand,” said James Goodwin, a senior policy analyst at the Center for Progressive Reform, a nonprofit research and advocacy group. “We’re talking about an unimaginably large universe of stuff suddenly in play.”

Wednesday’s vote was grounded in the Congressional Review Act, a vestige of Newt Gingrich’s four years as House speaker. Passed in 1996, the CRA gives one more chance to Congressional foes of regulation and the industries who lobby them. Legislation is passed, a president signs a bill into law, and a regulatory body goes through a rule-writing process that can last two or three years, if not longer. But since the CRA, any new rule must be submitted to Congress — often a new Congress and sometimes a new president, given how long rule-making takes — which has 60 legislative days to decide whether to crush it. If Congress passes a resolution, and the president signs it, the rule is not only struck down; that area becomes out of bounds for regulators without another act of Congress.

The CRA was used successfully just once in its first 21 years — to nullify a Clinton-era ergonomics rule to combat repetitive stress injuries in the workplace. Since Trump took office, however, it’s been used more than a dozen times to eliminate rules that were finalized in the waning months of the Obama administration. That includes a rule to stop coal companies from dumping waste into waterways, another that required employers to log all workplace injuries, and a third that would have given consumers the right to sue even if they had signed an agreement containing an arbitration clause. In each case, the issuing agency lost the ability to propose a similar rule any time in the future.

“The CRA is a much faster process that requires only a simple majority in the Senate, rather than 60 votes,” Goldstein explained.

Wednesday’s vote marked the first time that the CRA was applied to a guidance rather than a formal rule.  “Almost anything an agency puts down in writing is technically ‘guidance,’” said Goodwin. “That would include frequently asked questions on their website. It can include bulletins, interpretative statements, anything agencies do to provide a little more detail about regulations, usually to give industry more clarity about what their responsibilities are.”

The CRA doesn’t define what it means by a rule, explained Goodwin, but instead pointed to an obscure administrative law passed during the 1940s. “The term rule is defined incredibly broadly,” he said.

It’s no great surprise that Republicans chose the CFPB’s auto lending guidance as its test case. There’s no love for the CFPB among Republicans, and money pouring in from the industry may also have been a factor. The co-sponsors of Wednesday’s Senate resolution received a combined $5.2 million in campaign contributions from the auto industry, according to an analysis of campaign finance disclosures by Allied Progress, a left-leaning research organization and consumer watchdog. U.S. Sen. Pat Toomey, R-Pa., second from left, speaks as President Donald Trump listens during a meeting with congressional members in the Cabinet Room of the White House on Feb. 13, 2018 in Washington, D.C.

Toomey received at least $366,000 from auto lenders in his career, according to Allied Progress. That includes $58,000 from Blackstone, a private equity giant that owns a big piece of one subprime auto lender, and $34,000 from Kohlberg Kravis Roberts, which owns a big piece of another. The lead sponsor of the auto lending resolution was Jerry Moran, R-Kan., who has taken at least $225,000 in campaign contributions from the auto industry during his years in Congress.

Car dealers have been unhappy since the agency first declared its intention to fight discrimination in the industry. They thought that they had been insulated from the CFPB by the language in the Dodd-Frank financial reform legislation that created the new bureau. A wide range of players had lobbied Congress to include car dealers on the CFPB’s watch list, including military relief groups, who had seen countless young recruits duped by unscrupulous dealers. But as the chair of the National Automobile Dealers Association explained to me at the time, their organization has members in every congressional district in the country — and they won an exemption.

Yet the CFPB still had jurisdiction over those issuing car loans, and those loan terms are formalized inside auto dealerships. In the years following its March 2013 anti-discrimination guidance, the agency hit several large auto lenders with penalties for discriminatory practices, including Ally Financial, Toyota, and Fifth Third Bank.

The industry’s Congressional allies fought back repeatedly. In 2015, the House passed (with the support of more than 60 Democrats) the Reforming CFPB Indirect Auto Financing Guidance Act, but the bill never got anywhere in the Senate. The following year, an amendment was added to another bill that would have struck down the auto lending guidance. It, too, passed the House (this time with 19 Democratic votes) but stalled in the Senate. Meanwhile, the House Financial Services Committee released no fewer than three reports criticizing the CFPB for its “misguided” actions on auto lending.

Congress couldn’t sideline the CFPB, but they scored political points when they cast doubt on the methodology the CFPB employed in the study used to rationalize the 2013 directive. When a person’s race was unknown, its researchers had made assumptions based on a person’s name and zip code. Yet subsequent studies published in the wake of the CFPB’s guidance have left no doubt about what was happening in the industry. The National Consumer Law Center released a study in June 2015 which found that black borrowers, even those with good credit, were paying loan costs 100 to 300 percent higher than their white counterparts. More recently, the National Fair Housing Alliance sent white and nonwhite testers to auto dealers within 24 hours of one another. More often than not, according to the report released in January, the better qualified nonwhite applicant was given pricier loan terms than the less qualified white applicant. Nonwhite borrowers, the NFHA calculated, would pay on average $2,662 more than white borrowers over the life of a loan.

The CRA requires federal agencies to submit any new rules to Congress for its potential disapproval; the CFPB never submitted its auto lending guidance, since it had not gone through formal rule-making. Last spring, Toomey asked the Government Accountability Office to rule on whether the CFPB’s guidance in this case qualified as a rule and was therefore subject to the Congressional Review Act. In December, the GAO sided with Toomey, and with that ruling, the 60-day clock started — even if five years after the fact.

Wednesday’s Senate vote was closer than expected. In the end, only a single Democrat, Joe Manchin, D- W.Va., voted in favor of the resolution. Its passage in the House seems certain, as does Trump’s signature. “This is the next leg in Trump’s deregulatory agenda,” a policy analyst for the brokerage firm Raymond James told American Banker after the Senate vote.

“Because of this one vote, now every guidance document dating back to 1996 and passage of the Congressional Review Act has this cloud of uncertainty hanging over it,” said Goodwin, of the Center for Progressive Reform. Environmental Protection Agency regional offices develop enforcement guidelines to protect the wetlands in their areas. The Occupational Safety and Health Administration issues guidances on workplace safety. Agency after agency issues guidelines every year to protect communities. “We’re literally talking about tens of thousands of things over more than twenty years,” he said.

The only thing preventing an avalanche of rollbacks, Goodwin and others said, is that to challenge an agency’s guidance under the CRA means first asking the GAO for a ruling — a process that can take months. And the political will to undo past regulatory actions will likely evaporate if the Democrats win a majority in either the House or Senate.

Yet experts expect more of these votes. In November, for instance, the GAO told Sen. Lisa Murkowski, R-Alaska, that a 2016 land-use plan issued by the Bureau of Land Management could be reviewed under the CRA.  In March, the Senate passed a resolution, by a 51-48 vote, to strike down the plan.

“The Republicans’ intent here is to apply to the CRA as broadly as possible,” said Amit Narang, regulatory policy advocate at Public Citizen, “while they still have the stars aligned.”

This article was reported in partnership with The Investigative Fund at The Nation Institute, where Gary Rivlin is a reporting fellow.

Top photo: Mick Mulvaney awaits the start of a hearing held by the Senate Budget Committee on Feb. 13, 2018 in Washington, D.C.