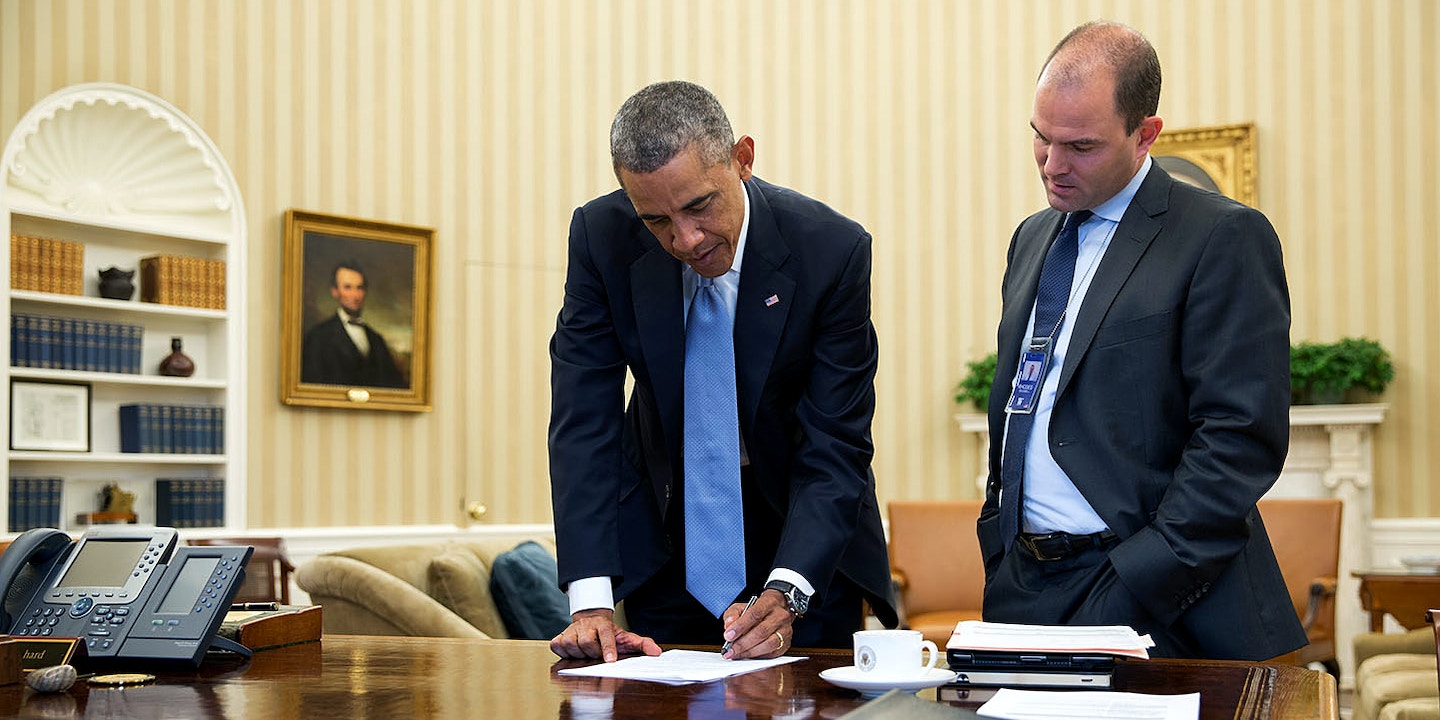 An Israeli private intelligence firm was hired last year to conduct a smear campaign against Obama administration officials, as part of an effort to discredit the Iran nuclear deal, according to leaked documents obtained by the New Yorker and London’s Observer newspaper.

The contours of the campaign, in which spies posed as representatives of fictional firms and requested meetings to discuss financial opportunities, appeared to closely match those of a similar effort carried out by operatives of an Israeli firm this year to smear critics of Hungarian Prime Minister Viktor Orbán, the far-right populist who is an ally of both President Donald Trump and Prime Minister Benjamin Netanyahu of Israel.

The private intelligence firm involved in the anti-Obama effort was identified as Black Cube by New Yorker contributing writer Ronan Farrow, citing two unnamed sources familiar with the operation. Farrow previously revealed the firm’s role in spying on women who had accused Harvey Weinstein of sexual assault. The Israeli newspaper Haaretz reported on Monday that an unnamed source close to Black Cube admitted the firm did spy on the Obama aides, but denied that the operation was related to the Iran deal.

“Black Cube agents were instructed to try to find damaging information about them,” Farrow wrote, “including unsubstantiated claims that Rhodes and Kahl had worked closely with Iran lobbyists and were personally enriched through their policy work on Iran (they denied those claims); rumors that Rhodes was one of the Obama staffers responsible for ‘unmasking’ Trump transition officials who were named in intelligence documents (Rhodes denied the claim); and an allegation that one of the individuals targeted by the campaign had an affair.”

While The Observer reported on Saturday that the private spies, including former Mossad agents, had been hired by aides to Trump, Farrow said that an unnamed source familiar with the operation told him on Sunday that Black Cube had been retained by “a private-sector client pursuing commercial interests related to sanctions on Iran.”

Unless Farrow’s Pulitzer-winning reporting on Black Cube’s work for Weinstein is incorrect, however, the firm’s denial that it spied on the former Obama aides rings hollow. That’s because, as the national security reporter Laura Rozen first reported, the same front company, Reuben Capital Partners, a fictional London-based wealth-management firm, was used as a cover by both an operative who spied on one of Weinstein’s accusers and an operative who tried to set up a meeting with Rebecca Vanasek Kahl, who is married to the former Biden adviser.

The female spy who befriended actress Rose McGowan claimed to be Diana Filip, a Reuben Capital Partners employee looking for ways to empower women. She was later identified as Stella Penn Pechanac, a former Israeli Air Force officer and actress whose non-Jewish family was rescued from Sarajevo in 1994 by Israel because her Muslim grandparents had saved Jews during the Nazi occupation of Bosnia in the 1940s. The female operative who contacted Kahl’s wife, seeking a meeting with her, and promising a donation to her children’s school, posed as Adriana Gavrilo, a “Corporate Social Responsibility Associate” at the nonexistent Reuben Capital Partners.

According to her LinkedIn profile, Gavrilo — whose pseudonym evokes Gavrilo Princip, the Bosnian Serb who assassinated Archduke Franz Ferdinand in Sarajevo in 1914, sparking the First World War — appears to be older than Pechanac, but is also fluent in Serbian. A screenshot from LinkedIn.

Farrow’s report notes that an intelligence operative using another name — whose now-deleted LinkedIn profile included a photo of a thin blonde woman who looks like Gavrilo — also sought a meeting with Ann Norris, a former State Department official who is married to Ben Rhodes, to discuss hiring her as a consultant on a film. Like Rebecca Kahl, Norris suspected that the approach might be from intelligence agents and did not agree to meet.

This is not behavior that should be acceptable in a democracy. It is thuggish, mean-spirited, and casts a chilling and threatening cloud over public service that risks extending far beyond me and @ColinKahl https://t.co/tQY1wOO7Yy

The identity of the client who paid the former spies to conduct the failed smear campaign remains a mystery. But looking for a way to destroy the international arms control agreement the Obama administration and five other countries struck with Iran is a key foreign policy aim of two world leaders: Trump and Netanyahu.

Last month, Black Cube vehemently denied that it was the Israeli private intelligence firm Hungarian intelligence sources blamed for an elaborate smear campaign targeting Hungarian rights activists and groups that receive funding from George Soros. However, there was little doubt that at least some of the operatives who carried out that attack on critics of Hungary’s prime minister were Israelis, since both of the men whose voices were recorded spoke English with Israeli accents.

Between December and March, as The Intercept previously reported on that effort, at least 10 people who either run Hungarian nongovernmental organizations or have worked with or been supported by Soros were approached by intelligence operatives posing as representatives of nonexistent businesses who requested meetings. Those who agreed to meet were then secretly recorded — in Vienna, Amsterdam, and New York — by intelligence operatives using fake names who probed their subjects for dirt on Soros or suggested unethical or illegal behavior.

As part of the operation, the operatives created fake websites for the companies they said they represented, all of which were taken down after the meetings. Heavily edited portions of those mostly uneventful conversations were then provided to far-right Israeli and Hungarian newspapers, which falsely presented them in the run-up to last month’s election, as incriminating evidence that the rights activists were plotting against Hungary.

Soros, as a supporter of Israeli and Palestinian rights groups, has also become a hate figure to ultranationalist Israelis — including Netanyahu’s son — who have recently bonded with ultranationalist Europeans around a shared hatred of Muslims.

Netanyahu, who has similarly tried to blunt criticism from rights groups supported by Soros, describing the philanthropist as “hostile to Israel,” has forged a close bond with Prime Minister Viktor Orbán. During a visit to Budapest last year, the Israeli prime minister was overheard urging the Hungarian leader to help him undermine a provision of a European Union trade agreement that imposes an obligation on Israel to respect the rights of the millions of Palestinians it rules in the occupied West Bank and East Jerusalem.

Although the effort to demonize Soros, a Hungarian-born Jewish financier whose philanthropy supports liberal causes, was accompanied by a government-funded advertising campaign that seemed to draw on racist tropes from the 1930s, Prime Minister Viktor Orbán’s spokesman, Zoltán Kovács, told The Intercept last month that the attacks on Soros, “if he’s a Jew,” could not possibly be anti-Semitic, since they were echoed by Netanyahu.

The target of one part of the Hungarian smear campaign, András Siewert, director of Hungary’s Migration Aid, was so suspicious of the approach from a man with an Israeli accent who called himself Grigori Alexsandrov, that he secretly recorded and photographed their meeting, and later posted the audio and photos on YouTube. Siewert’s recording shows that the operative had tried to aggressively push him in the direction of agreeing that his organization should be involved in politics, which he resisted.

That episode appears to mirror a conversation between an intelligence operative who posed as journalist to interview Trita Parsi, head of the National Iranian American Council and an expert on the Iran deal negotiations. Writing on Twitter, Parsi recalled that “things took a strange turn” at one stage in the interview, “as this pretend journalist tried to goad me into agreeing that the Obama administration had pursued the nuclear deal for economic and financial reasons.” According to a transcript of the call, The Guardian reported on Monday, the operative probed Parsi “for any ways Ben Rhodes and Colin Kahl… might have benefited from the 2015 agreement.”

In a series of tweets, Kahl suggested that the strange focus on him and Rhodes, as opposed to other, more senior figures involved in the Iran negotiations, might point to another Hungarian connection. Pointing to remarks made by the Hungarian-American former Trump aide Sebastian Gorka to Fox News in May, 2017, Kahl noted that “around the same time the Israeli firm was hired, senior White House aides began complaining to Fox News about a ‘Ben Rhodes-Colin Kahl nexus’ that was supposedly organizing opposition to the administration.”

“About a month after the Israeli firm was allegedly hired,” Kahl added, “anonymous White House officials reached out to the Washington Free Beacon, a right-wing tabloid, to smear Ben and me with baseless and false accusations.”

“As the summer wore on, senior White House aides pushed a narrative that Ben and I were solely responsible for turmoil across the Middle East,” Kahl noted, pointing to a July, 2017 CNN interview in which Gorka said: “policies that were born in the Beltway by people who have never worn a uniform, the people that were in the White House like Ben Rhodes, Colin Kahl, they helped to create the firestorm that is the Middle East, that is ISIS, today.”

.@jaketapper says @brhodes would put his "graduate degree" against @SebGorka's PhD any day of the week. Okay Jake, host the debate then. pic.twitter.com/Cg1Wrn0iz8

At the time, Kahl responded on Twitter with sarcasm and a jab at Gorka’s inability to gain a security clearance.

We invited Gorka to attend the meeting, but he didn't have the clearances and, in any case, had a media hit to do in the same time slot.

Late Sunday, Kahl also noted that before Gorka was forced out of the White House, he was reportedly tasked by Trump with helping to look for ways to justify withdrawing from the Iran deal.

“Some senior aides to the President were obsessed with Ben and me, and were seeking to smear us, around the same time the Israeli firm was tasked by someone to dig up dirt on us and our families,” Kahl concluded. “Did these same Trump aides—or outside people they contacted—have any connections to Black Cube? It’s unclear. Maybe it is all a coincidence. But it’s a creepy one… and one worth further investigation.”

Gorka does seem to have a strange obsession with trying, unsuccessfully, to bait Rhodes into responding to his insults on Twitter — which continued unabated on Monday following the revelation that he and Kahl had been targeted by foreign intelligence agents. 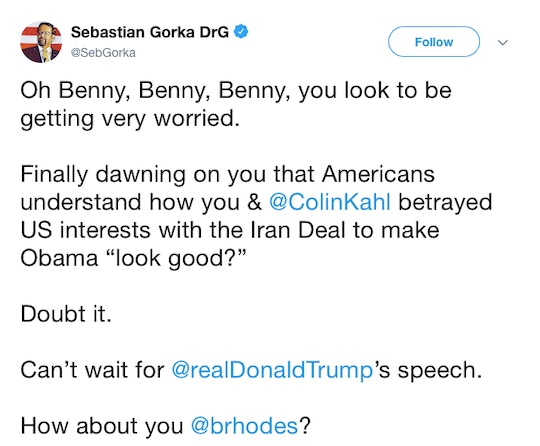 Update: May 7, 2018, 6:00 p.m. EDT
This article was updated to note Colin Kahl’s observation that the former White House aide Sebastian Gorka had publicly claimed there was “a Ben Rhodes-Colin Kahl nexus” supposedly working to undermine the Trump administration around the time that Israeli operatives were tasked with digging up dirt on the two Obama administration officials.