The battle in Tennessee pits the state’s GOP governor, Bill Haslam, against its public workers.

A university chancellor who took a controversial stand to protect the jobs of thousands of public workers has now lost her own.

University of Tennessee-Knoxville Chancellor Beverly Davenport was abruptly fired from her post last week, in a move representatives for unionized campus workers are calling another step toward the privatization of thousands of facilities management jobs. 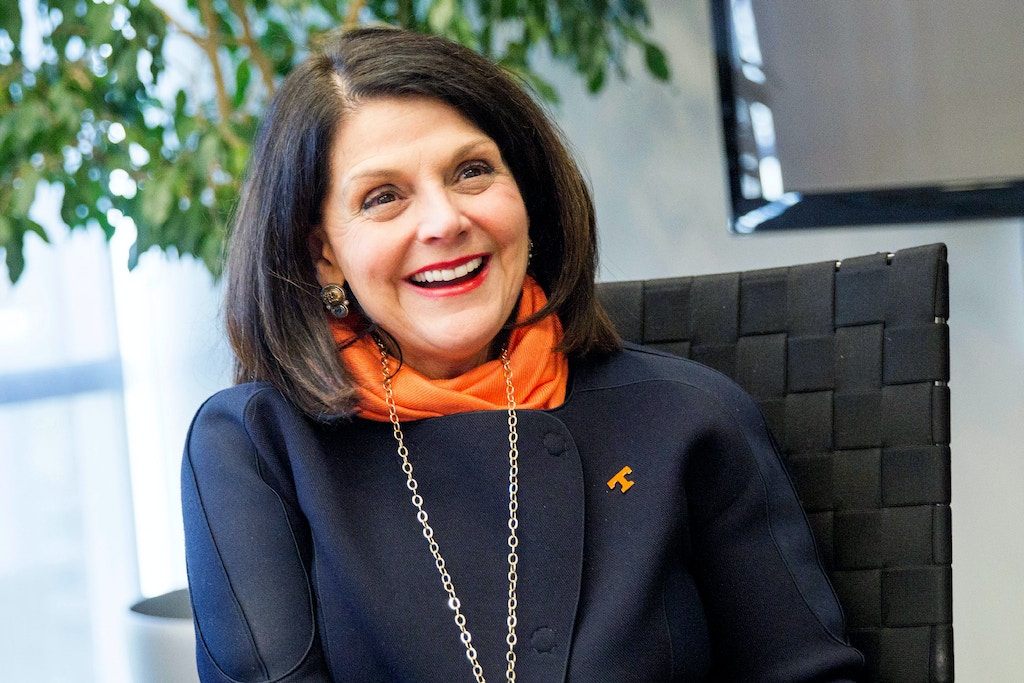 University of Tennessee-Knoxville Chancellor Beverly Davenport speaks to reporters on Dec. 15, 2016, in Nashville, Tenn., after the Board of Trustees unanimously voted to approve her appointment to head the state’s flagship public university.

The battle in Tennessee pits the state’s GOP governor, Bill Haslam, against its public workers, and UT-Knoxville is where the workers, backed by a student movement, have made their stand. The workers see Davenport’s firing as an effort to remove a key obstacle to privatization.

“This is an attempt to install new leadership more consolidated to the corporate and extremist political agenda of Haslam and the legislature in Nashville,” said Thomas Walker of United Campus Workers, the lead union for facilities employees at Tennessee colleges. “Davenport was an advocate for students, staff, and faculty.”

UT President Joe DiPietro made the announcement in a letter, citing “numerous areas of unsatisfactory performance.” The firing came just weeks after the state legislature approved a bill replacing the entire board of trustees for the university system with appointments made by Haslam. DiPietro himself is rumored to be leaving soon, which would enable the new board to choose his replacement.

With the legislation and the firing under his belt, Haslam has swapped out the board of trustees, who select the president of the system. The president recommends chancellors, which the board also hires. All of these people are likely to be different, and either directly or indirectly chosen by the governor.

Haslam has strongly advocated for privatizing the facilities management staff at all public buildings in Tennessee, under a sole-source contract with a company with which he has prior financial ties. And the flagship UT-Knoxville, under Davenport, was the critical roadblock to a system-wide take-up of the privatization plan.

Davenport also had her share of controversy in a little over a year as UT-Knoxville’s chancellor. Much of it came from hiring Athletic Director John Currie, who botched the search for a new football coach and was then let go in favor of former coach Phillip Fulmer. This caused a mini-riot among football-crazy alumni. Davenport also took heat for a weeklong, student-led program called Sex Week, intended to educate students about safe sex. That activity had been going on long before her arrival, but conservative lawmakers questioned the appearance of pro-choice groups on campus and Davenport’s presence at a fundraiser for a campus LGBT center.

But Davenport’s most defiant move came last Halloween, when she announced that UT-Knoxville would opt out of the proposed outsourcing. Tennessee signed a $330 million, five-year contract with Jones Lang LaSalle, the world’s largest facilities management firm, to privatize thousands of facilities and management jobs at all public buildings. Under a process called “vested outsourcing,” JLL did not have to bid for the project but instead, was able to sit down with the state and scope out the nature of the contract.

But Davenport sided with the United Campus Workers, students, faculty, and staff, deciding against the privatization contract. This led most of the university system, which comprises a large chunk of state public buildings, to opt out. Haslam, who disclosed while running for governor that he had a major investment in JLL that he put into a blind trust, expressed disappointment with the decision. He then methodically moved to transform the system’s leadership. (It’s possible the blind trust has sold his shares since.)

The UT Focus Act, passed in April, reduced the board of trustees from 27 to 11, with Haslam’s office empowered to appoint every member to staggered terms. Haslam’s office claimed the bill had to do with making the board more effective and “zero, zero, zero” to do with outsourcing. But critics argued it opened a back door for UT campuses affiliated with the board to opt back into the JLL contract.

Haslam quickly announced his nominees. Half of them were Haslam donors, seven were CEOs, and one, Raja Jubran, was the most outspoken proponent of the JLL privatization from the previous board. Another nominee, John Compton, was formerly CEO of Pilot Flying J, the truck-stop chain that made Haslam his fortune. Lobbyists Melvin Malone and Brad Lampley rounded out the group.

The Tennessee legislature, which has cooled to the idea of outsourcing, promptly struck five of Haslam’s nominees, including Jubran, Lampley, and Malone. Compton managed to get through. Six of the 11 voting members have been confirmed; four are current or former CEOs.

In confirmation hearings, many of the nominees vowed to oppose outsourcing. But Walker, of United Campus Workers, remains skeptical in light of the Davenport firing, which opens an opportunity to install a pro-outsourcing chancellor. “There is tremendous concern, especially given the dramatic restructuring of the board of trustees and the imminent departure of the UT system president DiPietro,” he said. Haslam’s office has not commented on the Davenport matter, despite a request from The Intercept.

Davenport will return to the classroom as a communications professor. An interim replacement has already been named. Davenport, blindsided by the firing, earlier this week posted a message to students titled “Our Future Is Bright.”

Students protested Davenport’s firing on campus Wednesday. “Beverly Davenport was the only person with the gall to stand up to Bill Haslam when he wanted to outsource hundreds of jobs at the University of Tennessee,” wrote one on Twitter. “I’m sure it’s just a coincidence she was fired.”