A new report details the Los Angeles Police Department’s use of algorithms to identify “hot spots” and “chronic offenders” and target them for surveillance. 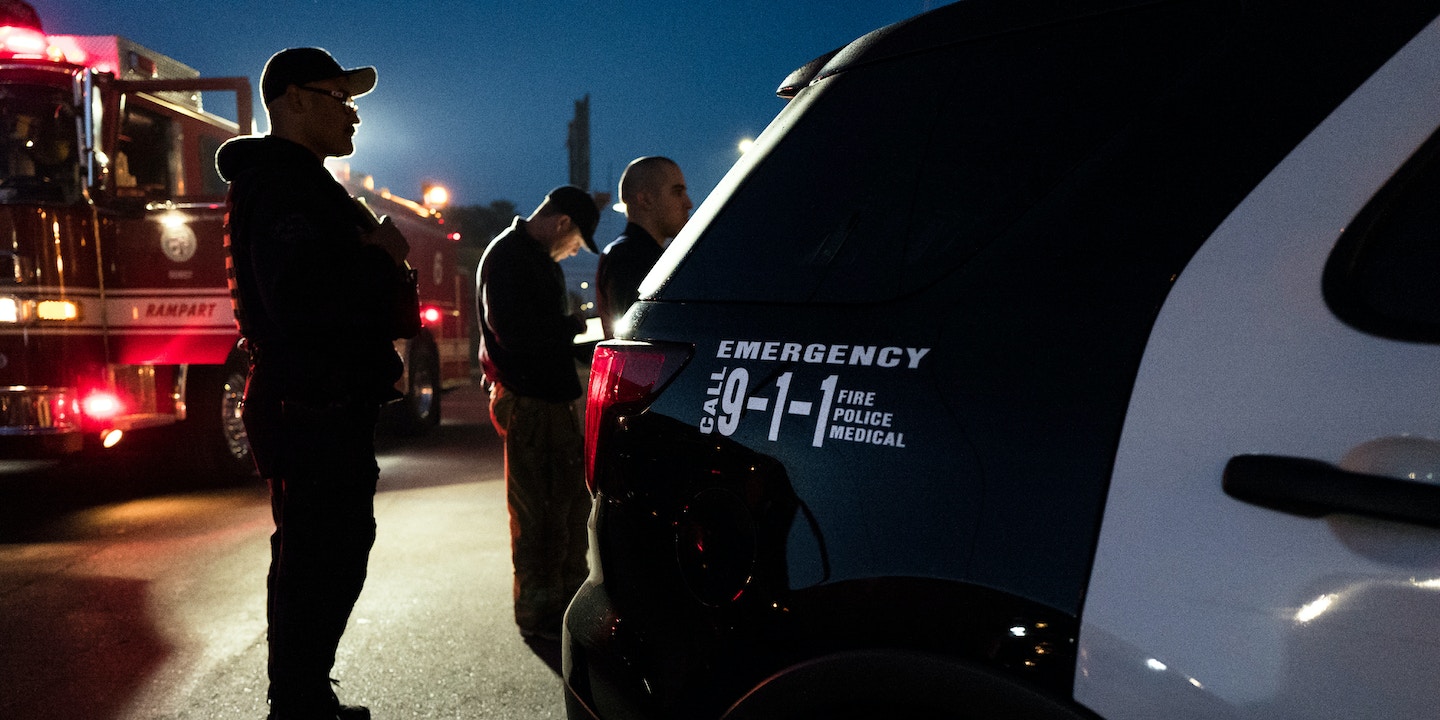 Police stops in Los Angeles are highly concentrated within just a small portion of the population, and the Los Angeles Police Department has been using targeted predictive policing technology that may exacerbate that focused scrutiny. That’s according to a report put out this week by the research and activist organization Stop LAPD Spying Coalition, which draws from the testimony of city residents and newly released police documents to paint a picture of a “racist feedback loop” in which a “disproportionate amount of police resources are allocated to historically hyper-policed communities.”

Survey results included in the report suggest that very few people in Los Angeles bear the brunt of most police interactions: Two percent of residents who responded to the survey reported being stopped by police between 11 and 30 times a week or more, while 76 percent of respondents reported never being stopped at all. The 300 survey respondents were distributed across geography, race, age, and gender. In focus groups, people who lived in areas heavily targeted by police described a state of constant surveillance. Asking “how often do I see police in my area is like asking me how many times do I see a bird in the day,” said one resident.

Asking “how often do I see police in my area is like asking me how many times do I see a bird in the day.”

What’s more, the LAPD has been using technology from the data-mining firm Palantir that may amplify that concentration, as part of a predictive policing program that targets and surveils specific individuals within select neighborhoods based off their recent history with the criminal justice system.

Officers and analysts who work on Operation LASER, or Los Angeles Strategic Extraction and Restoration, are tasked with maintaining an ongoing list of community residents to monitor, by creating “Chronic Offender Bulletins” for so-called persons of interest. Each of the 16 department divisions that currently use the program is required to maintain a minimum of a dozen of these “bulletins,” which are intended to help officers “identify the most active violent chronic offenders” in a given geographical area.

That identification process has two stages: an initial screening phase, in which a “crime intelligence analyst” subjectively decides whether the police records, like arrest reports and field interview cards, associated with an individual are “relevant” enough to move them to a “workup” phase. The “workup” involves software provided by Palantir that pulls data on criminal history and affiliations, and from license plate readers and social media networks, and uses it to create a “chronic offender score” for the individual.

Once someone is deemed a sufficient threat based off their score, officers send them letters and are encouraged to knock on their doors to let them know they’re being monitored. Officers are also instructed to look out for opportunities to stop or arrest them (if they have a warrant out). An October 2017 version of a checklist that instructs analysts and officers on how to deal with chronic offenders was among the documents that Stop LAPD Spying obtained through a California Public Records Act request. (Stop LAPD Spying first provided the documents to In Justice Today, which reported on them Tuesday.)

“If they don’t get stopped, they stop being on the list,” said Dennis Kato, an LAPD deputy chief, in an interview with The Intercept. In other words, the only way for someone to get off a chronic offenders list for an area is to not have any interactions with the police — a sort of Catch-22 since the program is intended to flag individuals for increased police attention. And if someone is removed from the list, they aren’t notified. “I don’t think it’s an ideal system,” Kato said. By early 2019, he says, the entire city of Los Angeles will be using the LASER program.

The report also highlights another predictive policing program currently in use by the LAPD, called PredPol. Both Operation LASER and PredPol are sponsored by the federal Bureau of Justice Assistance’s SMART Policing Initiative, which aims to use “evidence-based, data-driven” policing strategies to try and pre-empt and prevent crime.

PredPol software, marketed by a private company, relies on a machine-learning algorithm much like the ones used by corporate giants such as Facebook and Amazon for advertising purposes. It’s a mathematical model that inputs three variables: where a crime was committed, when it was committed, and what type of crime it was. The model is used to calculate “hot spots” throughout a given metropolitan area —150 square-meter areas where, theoretically, certain types of crimes are more likely to be committed on a given day — which patrol officers use to plan out their daily routes. Studies have already shown that PredPol technology re-enforces racially biased policing patterns and practices, but the technology remains in use by the LAPD and at least 50 other law enforcement agencies around the country, according to a PredPol spokesperson.

The Stop LAPD Spying Coalition received October 2017 documents on Operation LASER after filing a lawsuit against the police department in February of this year, but is still waiting on more documents related to the program, including its funding and data sources, according to Hamid Khan, one of the coalition’s co-founders.

“Predictive policing programs … enable the continuation of decades of discriminatory and racist policing under the apparent neutrality of objective data.”

Both programs draw on scientific disciplines: PredPol is adapted from models that predict earthquake aftershocks, while the documents obtained by the coalition indicate that the LAPD uses a series of medical analogies to describe the functions and goals of Operation LASER — from the very title of the program, to describing the amount of visible police presence in an area as a “dosage,” to calling repeat offenders “chronic.” The BJA, the federal bureau which sponsors the local program, admits as much: Operation LASER “is analogous to laser surgery, where a trained medical doctor uses modern technology to remove tumors or improve eyesight,” according to a BJA report.

The Stop LAPD Spying Coalition criticizes the scientific assumptions that underlie predictive policing for “pathologizing” individuals and entire neighborhoods, and says that the programs “enable the continuation of decades of discriminatory and racist policing under the apparent neutrality of objective data.”

Unlike PredPol hot spots, so-called LASER zones are based off geographical data and determined in part based on observations that analysts make about a neighborhood and its residents. According to an LAPD document, the analysts ask questions like, “What they were doing? Talking to neighbors? Walking? Driving down the streets slowly? Playing chess in the park? Or, are they dealing drugs on the street corner or just hanging out?”

The coalition’s community-based focus group results indicate that residents, while not always aware of the details of police surveillance in their communities, nonetheless have a sense that it is occurring. “I feel like they already know who you are by the time they stop you or give you a citation,” one resident said. “They already know your name and who you are hanging out with.”

Update: May 11, 2018, 1:35 p.m.
This article has been updated to note that In Justice Today first reported on the documents obtained by the Stop LAPD Spying Coalition.

Top photo: LAPD officers search for robbery suspects near Beverly Drive and Juanita Avenue in the early morning hours of May 5, 2018.