Gina Haspel and the Fiction of a Feminist CIA

Haspel’s nomination points to a long and fraught history of the CIA trying to burnish its image by highlighting women’s advancements in the agency. 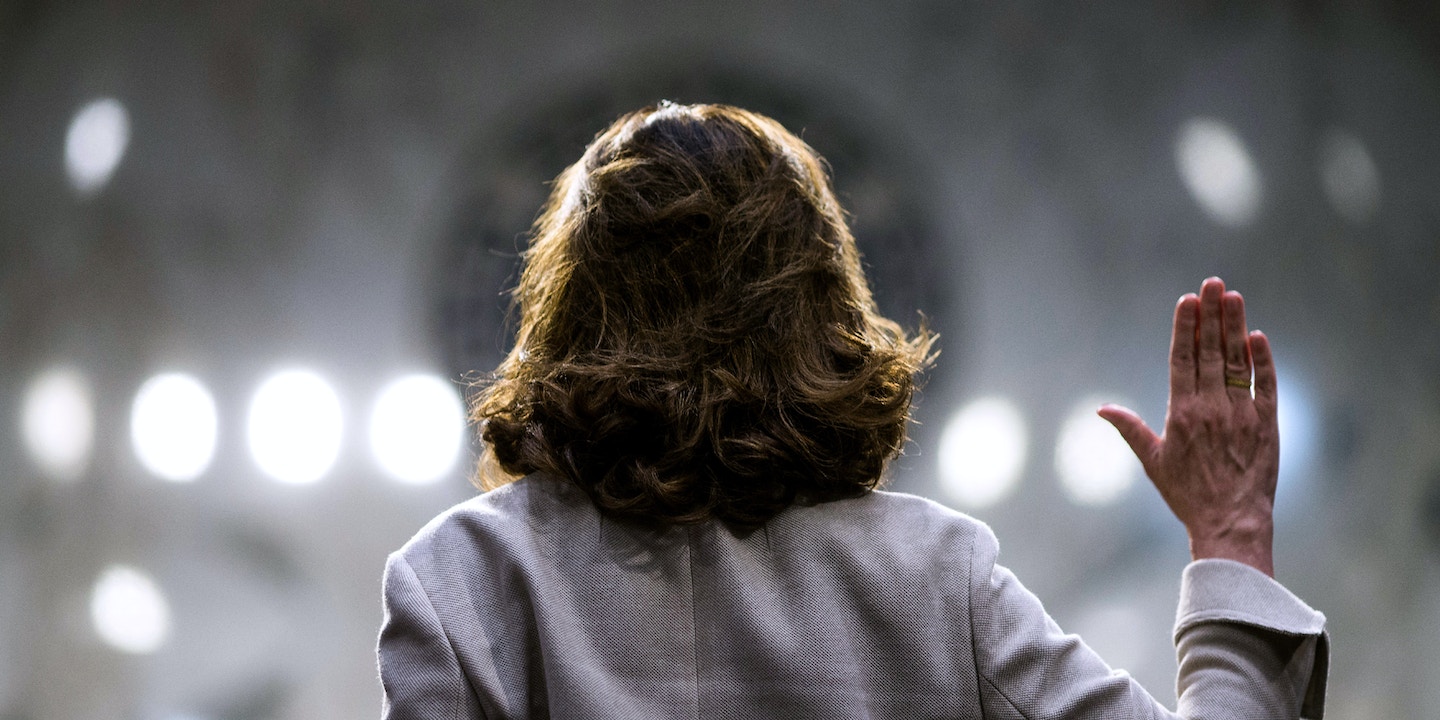 Since the announcement of Gina Haspel as the Trump administration’s nominee to lead the CIA, the White House, the agency, and its defenders have leaned heavily on the fact of Haspel’s gender, singling out its historic significance, and suggesting that she ought to be supported because of it. They use it to undermine critics who believe that the most salient thing to consider about Haspel is her role overseeing a CIA black site prison in Thailand, where people were tortured, and her role in the destruction of videotapes of interrogation sessions.

White House spokesperson Sarah Huckabee Sanders tweeted last weekend that “any Democrat who claims to support women’s empowerment and our national security but opposes her nomination is a total hypocrite,” while Trump’s tweets often mention she’s “a woman.”

There’s obvious hypocrisy in the Trump administration claiming to support women’s empowerment. In addition to the president’s personal history of sexist comments and the many women who’ve accused him of misconduct, The Atlantic found that this White House has appointed twice as many men as women to the administration. And it seems like most Democrats aren’t falling for such taunts. But Haspel’s nomination points to a long and fraught history of the CIA trying to burnish its image by highlighting women’s advancements in the agency.

In Haspel’s case, the agency went on an unusually forward public relations campaign, which featured the glass ceiling narrative. In an official profile of Haspel made up of select declassified details, the CIA noted that “the skepticism of some of her male colleagues” to her first posting “was obvious, with comments like, ‘I can’t believe they’re sending you to a place like that.’” An anonymous official told CNN that “anyone who knows the confirmation process knows she is on track to get confirmed, D.C. men’s rooms gossip notwithstanding” – a side comment that seems to underline the effort to paint opposition to Haspel as having to do with her gender, not her record.

It’s a convenient coincidence that the agency’s Twitter feed celebrated Women’s History Month in March with a series of threads on Haspel’s female forebears at the CIA. In a Washington Examiner piece full of CIA veterans backing Haspel, a former female CIA official, Carmen Middleton, said that Haspel would be a role model for a new generation at the agency: “I think if she’s able to break through this significant glass ceiling at the CIA and make history for the organization, it will be a powerful moment for young women, young people of color, who might not have thought about the agency or national security service to do so now.”

Women’s issues are too often represented as a finite list focused purely on the domestic, while national security and foreign policy are rarely examined through a feminist lens.

Haspel echoed that at her public confirmation hearing last week, saying that she’d received an “outpouring of support from young women at CIA and indeed across the [intelligence community] because they consider it a good sign for their own prospects.”

Before Haspel, the female analysts involved in the hunt for Osama bin Laden were memorialized in the movie “Zero Dark Thirty” (for which the CIA famously gave filmmakers unprecedented help and access.) The film’s celebration of the women’s key role — CNN gushed it was a “reworking of the war on terror as a feminist epic” — was, like Haspel’s nomination, accompanied by criticism of those women’s involvement in torture and the way the film appeared to justify that torture.

In 2014, at the height of media attention on drone strikes, an article appeared in Real Clear Politics about “the CIA’s drone queens,” borrowing its title from a “Homeland” episode and stating that “the next time Obama authorizes a strike in Pakistan, the odds are that it will be a woman who gives the green light moments before death is delivered from a drone.” Controversies over the legality or morality of those strikes went unmentioned in the piece, as it described a “sisterhood” of women involved in the targeted killing campaign who drank iced lattes and baked birthday cakes for one another (spies — they’re just like us!). The top expert on Pakistan was said to be “strikingly attractive in her stiletto heels” – so attractive, the article asserts, that Barack Obama grinned and said, “You don’t look like a Pakistan expert.”

In 2016, the CIA gave Newsweek access to seven women in different parts of the agency, in what the magazine saw as the CIA’s attempt to combat the misconception that women’s roles at the agency were limited. In fact, Newsweek reported, “women make up 45 percent of the CIA workforce and 34 percent of senior leadership. Between 1980 and 2012, female representation increased from 9 percent to 44 percent of midlevel to upper-midlevel positions, like team chiefs or deputy team chiefs.” (In terms of racial diversity, the CIA is much less balanced.)

Nevertheless, the article raised the difficulties of being a woman and advancing in the agency. The national security world – not just the CIA — is a boys’ club to beat all boys’ clubs, as most women who’ve worked in it will tell you. There are dated and condescending attitudes about what women can and can’t do. The field is dominated by a buttoned-up, masculine attitude that disdains alternative appearances and demands displays of toughness.

There is also harassment and assault, made all the more difficult to report due to the secrecy of missions or the close quarters where men and women work overseas. On top of that, there is the choice between family life and grueling hours and dangerous, high-pressure postings (a choice never so noteworthy when men make it).

Those were points underlined by women who signed a “MeTooNatSec” open letter published late last year. The CIA – and the intelligence community generally — had scant representation among the 233 signees (the State Department dominated, likely because the letter was first circulated in a group of female former ambassadors), but the public record makes clear that the agency has gender problems. In 1995, the CIA settled a lawsuit in which female employees accused the agency of “widespread sexual bias and harassment in its clandestine operations unit,” the Times reported then. In an op-ed published last week in the Washington Post, Karen deLacy, a retired CIA operations officer, said that “an inclusion crisis exists in the clandestine cadre of the CIA: fewer women applying to be operations officers, few women in important leadership positions, and continuing harassment of and discrimination against women.”

DeLacy lays out ways in which Haspel, as director, could improve accountability and processes for reporting and dealing with discrimination and harassment, improve data and analysis on the CIA’s workforce, and better incorporate that information into hiring and promotions.

Increasing the representation of women in the CIA, including at the very top, would likely help with internal workplace discrimination. More optimistically, it might increase the space for differing viewpoints, perhaps including less bellicose or U.S.-centric ones (one recent survey of U.S. citizens found that “as the strength of gender egalitarian attitudes increases, respondents’ support for the use of force to achieve traditional security objectives declines,” especially among men.)

It’s analogous to Sheryl Sandberg’s “lean in” feminism: It may be good for the careers of individual women, but it does nothing to address the injustices perpetrated by the system as a whole.

Haspel didn’t speak to any of these things during the public confirmation hearing. But even if she did make it easier to be a woman working at the CIA, that misses a bigger point: What are those women working for?

Haspel’s case makes a caricature of feminism that would say any glass ceiling is good to break: The Onion headline, “Gina Haspel Recalls Having to Torture More Prisoners Than Male Colleagues to Prove Herself” must have been only too easy to write.

But her case also underlines the fact that mainstream discourse on women’s empowerment is too often siloed from foreign policy and national security, including among progressives. In the popular movement, women’s issues are too often represented as a finite list focused purely on the domestic (reproductive rights, pay equity, sexual assault, child care), while national security and foreign policy are rarely examined through a feminist lens, except in terms of workplace equality for women working in those fields.

The notable exceptions are the many Muslim and African-American activists who’ve led opposition to domestic surveillance of their communities, and the writers, scholars, and activists who’ve questioned supposedly feminist justifications for military intervention in Muslim countries. A global feminist perspective insists that we can’t blindly celebrate the historic advancements of women within the U.S. national security state at the expense of critiquing the policies in which those women are implicated. We have to consider the impact of U.S. wars, assassinations, surveillance, and other policies on women the world over.

It’s analogous to the critique of the corporatism of Sheryl Sandberg’s “lean in” feminism: It may be good for the careers of individual women, but it does nothing to address the injustices perpetrated by the system as a whole. As Egyptian writer Mona Eltahawy said in March when Haspel’s nomination was announced, “I do insist that putting women at the service of patriarchy is no victory for us. These are discussions that will come up again and again as women demand inclusion in institutions that have not been friends to women, such as the military, religious institutions, corporations — and the CIA.”

The CIA is an institution dedicated to the dominance of U.S. interests abroad. The agency’s perception of those interests in the years after the 9/11 attacks, and what it was willing to do in service of them, are the most important questions Haspel had to answer. She has stated that “the enhanced interrogation program is not one the CIA should have undertaken,” but during her confirmation hearing, she refused to unequivocally condemn the torture. Any amount of gender parity Haspel might bring to the agency is irrelevant in light of that.

Top photo: CIA Director nominee Gina Haspel is sworn in during her confirmation hearing before the Senate (Select) Committee on Intelligence on May 9, 2018.