By making it his goal to empower Trump-like nationalists across Europe, Ambassador Richard Grenell seems to be treating U.S. allies like Cold War enemies. 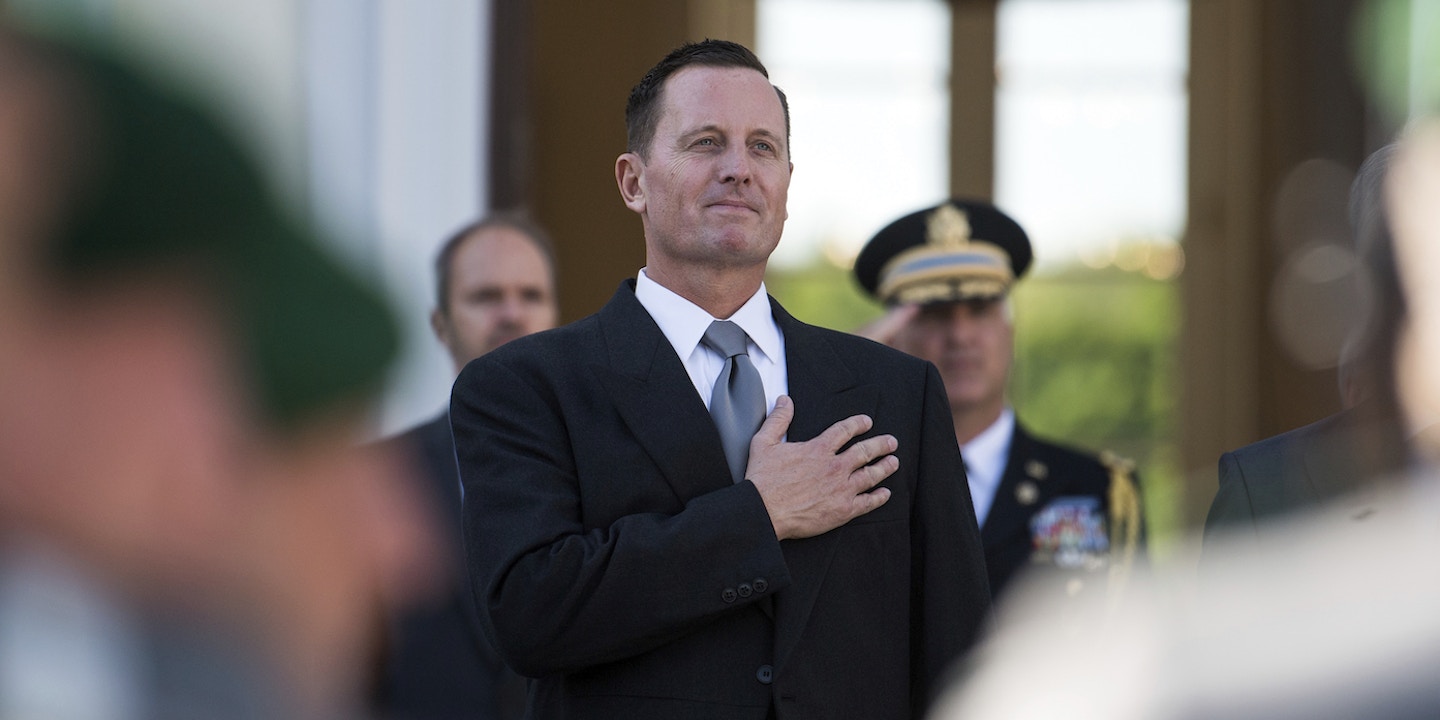 The German government demanded a formal explanation from the United States on Monday of what, exactly, the new U.S. ambassador in Berlin, Richard Grenell, meant when he promised to use his office to help far-right nationalists inspired by Donald Trump take power across Europe.

In an interview with Breitbart News, published on Sunday, Grenell said he was “excited” by the rise of far-right parties on the continent and wanted “to empower other conservatives throughout Europe, other leaders.”

US Ambassador to Germany Richard Grenell makes clear he is a political activist who will use his position to promote political change in his host country (and all over Europe). https://t.co/ruo0lrGFMa

Grenell was apparently not asked if that group includes the far-right Alternative for Germany — known by its German initials AfD — the largest opposition party in the German parliament, but he did praise Austrian Chancellor Sebastian Kurz, a center-right politician who is in coalition with the Freedom Party, which was formed in the 1950s by a former Nazi officer.

A spokesperson for the German foreign ministry told reporters that Chancellor Angela Merkel’s government had “asked the U.S. side for clarification” as to whether the remarks “were made as reported.”

Grenell, a former Fox News pundit whose abrasive Twitter style had already alienated many Germans, tweeted on Monday that it was “ridiculous” to suggest that he would endorse candidates or parties, but stood by his claim to Breitbart that Europe, like America, was “experiencing an awakening from the silent majority — those who reject the elites and their bubble. Led by Trump.”

"... - those who reject the elites & their bubble. Led by Trump." - @RichardGrenell #kannsteDirnichtausdenken #Grenell #Trump pic.twitter.com/hUfW8VY6hd

Leaving aside that Trump was, in fact, elected by a hypervocal minority of American voters, his envoy’s apparent willingness to cast off diplomatic neutrality and meddle in the internal affairs of European countries caused an uproar.

Sevim Dagdelen, a member of the left-wing German opposition party Die Linke, suggested that Grenell had revealed himself to be Trump’s “regime change envoy.”

The leaders of Germany’s Social Democratic Party, the junior coalition partner in Merkel’s government, were similarly unstinting in their condemnation. “Europe’s citizens cannot be told how to vote by a Trump vassal,” the party’s vice chair, Thorsten Schäfer-Gümbel, wrote on Twitter. “A U.S. ambassador who meddles in democratic contests is simply out of place,” he added, perhaps hinting that the ambassador could be asked to go home.

Martin Schulz, the former leader of the Social Democrats, accused Grenell of behaving less like a diplomat than “an extreme-right colonial officer.”

Omid Nouripour, the foreign policy spokesman for Germany’s Green party, told Der Spiegel that “the American people should be able to expect partisan neutrality from their representative in Germany, because he represents all Americans, not just Breitbart and Fox News.”

Guy Verhofstadt, a former prime minister of Belgium who now leads the Alliance of Liberals and Democrats for Europe, a free-market group in the European Parliament, tweeted: “We have to defend Europe against Trump. It’s not up to his ambassador to influence our elections and steer our society. We respect the sovereignty of the U.S., they have to respect ours.” Verhofstadt added the hashtag #GrenellRaus — “Grenell Out” — to his tweet.

There was, however, one political leader in Berlin on Monday who demonstrated his support for the embattled American ambassador. Israel’s far-right prime minister, Benjamin Netanyahu, announced at a news conference with Merkel that he had agreed to a brief meeting with Grenell, at the ambassador’s request, before leaving the German capital.

Before he was confirmed by the Senate, Grenell — a hyperpartisan Republican activist whose farewell party in New York was attended by Donald Trump Jr., Bill O’Reilly, Sarah Huckabee Sanders, Wayne Newton, and a half-dozen Fox News personalities — had promised to stay out of German politics.

When I raised concerns to Grenell about politicizing this post, he personally assured me that once he became Ambassador he would stay out of politics. This interview is awful - Ambassadors aren't supposed to "empower" any political party overseas. https://t.co/i8oOhqEk5k

What was perhaps most stunning about Grenell’s stated aim to intervene in European politics on behalf of far-right leaders is how closely it mirrored, and inverted, the behavior of American diplomats in Eastern Europe during the Cold War, when those states were part of the Soviet bloc. Before the fall of the Berlin Wall, U.S. ambassadors did make a point of supporting antigovernment dissidents, but in those cases, the stated aim was to promote democracy in authoritarian states.

By making it his goal to empower Trump-like nationalists in Germany and other European nations, Grenell seems to be treating democratic U.S. allies like authoritarian Cold War enemies.