Joe Crowley believes he was born to take on Donald Trump — and it’s not his fault he was born white. On a warm Sunday evening in Queens, New York, Joe Crowley stood before a group of about two dozen Democratic activists and made his case for why he should be returned to Congress for a 10th term. In his view, it was “destiny.”

“I was born for this role,” Crowley said at the May 20 meet-and-greet. Like President Donald Trump, he was born in Queens, though in entirely different circumstances. Trump came from great wealth and privilege, Crowley observed, while the congressperson was born to a family of Irish immigrants — the son of a police officer. Crowley is routinely floated as next in line to be the leader of the House Democrats if Rep. Nancy Pelosi of California steps aside or is ousted.  “He was trying to say that me being a guy from the same place [Trump] is from, I’m the guy to take him on,” said Andy Aujla, who hosted the event at his home.

To meet with that destiny, however, he has an obstacle to overcome: Alexandria Ocasio-Cortez — a Bronx-born millennial whose scrappy challenge from the left has generated excitement nationally and around the district, which encompasses parts of Queens and the Bronx.

If Crowley positions himself as a photo negative of the president, Ocasio-Cortez is a different medium altogether. A 28-year-old woman and daughter to a Puerto Rican mother and Bronx father, Ocasio-Cortez’s most notable novelty is arguably not her demographic profile, but her policy profile. She calls for the abolition of U.S. Immigration and Customs Enforcement (ICE), Medicare for All, tuition-free public college, a federal jobs guarantee, and criminal justice reform “now.” “It doesn’t take 100 years to do this,” she intones in a viral campaign video. “It takes political courage.”

Crowley, though, when he talked about the campaign, shared his frustration over what he perceives to be an inordinate focus on ethnicity.

His opponent, he said, was trying to make the campaign “about race” — a strategy he called “unnecessarily divisive” at a time when the party needed to be “fighting Republicans, not other Democrats,” according to two people at the gathering.

“I can’t help that I was born white,” Crowley said. One of those who heard Crowley’s speech, Nick Haby, a Democratic activist who attended the meet-and-greet, agreed to speak on the record, while the second asked for anonymity given Crowley’s power in the Queens political machine.

Vijay Chaudhuri, a spokesperson for the Crowley campaign who was at the event, said Crowley’s remarks had been inaccurately relayed in a manner intended to “tear down Joe and boost his primary opponent.”

The Crowley campaign connected The Intercept with the host of the event, Aujla, to refute the claims being made, but Aujla said that while he didn’t hear Crowley opine on the political implications of his whiteness that evening, he had heard him make a version of that remark before. “I don’t remember him saying that directly, but I have heard him say at other places, ‘I can’t help the color of my skin or anything like that, but I am very diverse, I support very diverse people,’ or something to that extent,” said Aujla, adding that he was not offended by anything Crowley said that evening.

New York state Sen. Michael Gianaris, whom the Crowley campaign also recommended to The Intercept, was at the event as well. He said he did not hear Crowley’s comments about race, though he did hear his riff about being born in the same place as Trump.

City councilman Costa Constantinides said that he’s heard Crowley contrast himself with Trump at so many events he could recite that portion of the stump speech verbatim. “He feels like he was born for this moment; there couldn’t be two guys from Queens who are more different,” Constantinides, who has endorsed Crowley and was at the gathering, recounted.

He said he didn’t recall Crowley making any comments about his own race being a hinderance in the campaign. Constantinides explained that he wasn’t paying close attention to Crowley’s talk, that he was mostly chatting with constituents and eating baklava during the remarks. “I remember him saying he’s not running against Alexandria, but he’s running against a president that is wrong,” he said.

Haby said he came to the event with an open mind about Crowley, but he left leaning against him, even though he aligns with the Hillary Clinton wing of the party, whose agenda is most closely mirrored by Crowley’s. (Ocasio-Cortez is a former organizer for Bernie Sanders’s 2016 campaign and has been endorsed by Sanders-affiliated groups Our Revolution and People for Bernie Sanders, as well as the Democratic Socialists of America.)

Most of those at the event were white or white-presenting, Haby said, and he found Crowley’s defense that he couldn’t “help” being born white, coupled with his claims of being “destined” for leadership, odd and off-putting.

The source who originally tipped The Intercept off to Crowley’s alleged remarks in the days following the event was similarly troubled by Crowley’s comments on race. “It just felt really weird and not appropriate,” he explained.

If Crowley’s comments seem odd, it may be because Crowley is relatively inexperienced at campaigning.

Crowley graduated from Queens College in 1985 while his uncle, Walter Crowley, was serving as a city councilor — a seat he had inherited from then-Queens party boss Tom Manton. Walter Crowley died in 1985, and according to subsequent New York Times reporting, Joe Crowley “set his eyes” on the seat, but was thwarted. “[W]hen Assemblyman Ralph Goldstein died in 1986, Mr. Crowley decided to run in the Democratic primary to succeed him. It was a crowded race with seven candidates. Mr. Crowley, then 24, won that race decisively,” the Times reported.

Crowley fended off a primary challenger in 1988, winning comfortably.

In 1999, when Manton, by then a member of Congress, retired, Crowley got a phone call from him. “On the last legal day to find a replacement, Mr. Manton convened a small meeting and telephoned Joseph Crowley, then an Assemblyman, to tell him he would be on the ballot in November [2000] as a congressional candidate,” the New York Sun reported.

He was effectively appointed to Congress by the party boss. Crowley also inherited Manton’s role as the new “king of Queens,” and has run the district machine since then. He had to defend his seat against primary challengers in 2002 and 2004 and each time won comfortably.

Despite having been in elected office for more than 30 years, Crowley has faced just four primary contests, and won them all comfortably. He has not faced a challenger since 2004.

His seat is now being challenged by Ocasio-Cortez, who’s running with a grassroots army, national attention, and a popular campaign ad that celebrates her independence from the Queens machine — her freedom to mount a direct challenge to the throne. 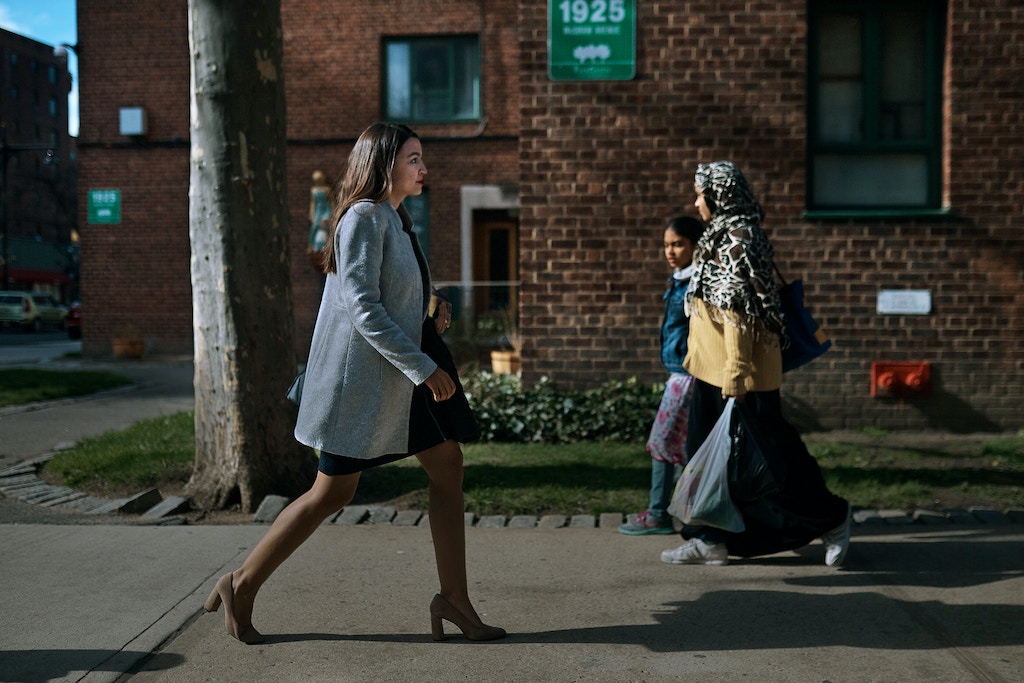 The irony that Crowley laments how he “can’t help” being white, while ignoring the political advantages he inherited, is not lost on Ocasio-Cortez. “The congressman could have helped that he accepted inheritance of his seat from a multigenerational political dynasty without a true primary — a process by which people of color are historically locked out of representation. The congressman could help that he voted to establish ICE. The congressman can help the fact that he accepts money from developers that are displacing our communities and the folks criminalizing our backyards,” she told The Intercept.

“Additionally, why is it that the congressman can proudly discuss his Irish heritage on the campaign trail, but I am somehow barred from mentioning my Puerto Rican family?”

Chaudhuri, the Crowley spokesperson, said Crowley focused his remarks on Trump, not his own complexion:

This is not how Joe speaks or how he views the world. When Joe talks about his role in Congress, he speaks of being a foil to the hateful, racist, and discriminatory policies of President Trump. He did not discuss leadership or the primary. Anyone who says otherwise is not telling the truth.

When Joe discusses his race, he acknowledges that he has an extraordinary responsibility to use his platform to do good on behalf of others. This is why Joe has spent his entire life standing up to bullies who discriminate against others based on their background, religion, race, orientation, or gender.

This is a story concocted to tear down Joe and boost his primary opponent. Thankfully the people of Queens and the Bronx can see through that, which is why Joe has the support of the community and activists in the district.

Haby said that while he left the event disinclined to vote for Crowley, the next day’s news solidified his decision: Crowley endorsed New York state Sen. Jose Peralta for another term. Peralta had been a member of the Independent Democratic Conference — a group of Democrats who caucused with Republicans to deny Democrats a majority in the chamber. Peralta later rejoined the caucus, and Crowley has said he endorsed Peralta in response to his change of heart.

Haby is a board member of the Lesbian & Gay Democratic Club of Queens and a member of Stonewall Democrats. He’s also the chair of the marketing and social media committee for the Powhatan and Pocahontas Regular Democratic Club.

The LGDCQ later endorsed Crowley, though Ocasio-Cortez did not compete for their backing. She assumed that, as part of the Queens political establishment, the club would never endorse anyone but Crowley, and her campaign decided to invest its limited resources into competing for votes it felt were more winnable. She says that decision was made early on. “At my first attempt to meet a local Dem club, they heard I was coming and rushed to endorse Crowley before I arrived. It’s never been our strategy to court a system led by Crowley,” she said.

Haby said he was disappointed by her decision not to reach out to his club, but accurately guessed at her rationale.

Ocasio-Cortez now says she has rethought that approach after realizing that Crowley’s support was softer than it initially appeared. The LGDCQ’s endorsement is a case in point. “I do think I perhaps overstated how strong this machine was in its loyalty to Crowley,” she said. “When I started, everyone told me it was a done deal. As I’ve gone further, I’ve seen that his support isn’t as strong as people say it is.”

For evidence, look no further than Aujla, the host of Crowley’s meet-and-greet. He told The Intercept he appreciates all the work Crowley has done for the community and is “most likely” going to vote for him. But he had some kind words for Ocasio-Cortez, too. “I think Alexandria’s putting on a great campaign and she’s inspiring,” he said. “Joe has strong support in the community too, so if it’s bringing out more people from different backgrounds, I think that’s a great thing.”