New Yorkers have been added to the NYPD gang database under de Blasio at a rate of 342 people per month, nearly three times the rate of the prior decade. 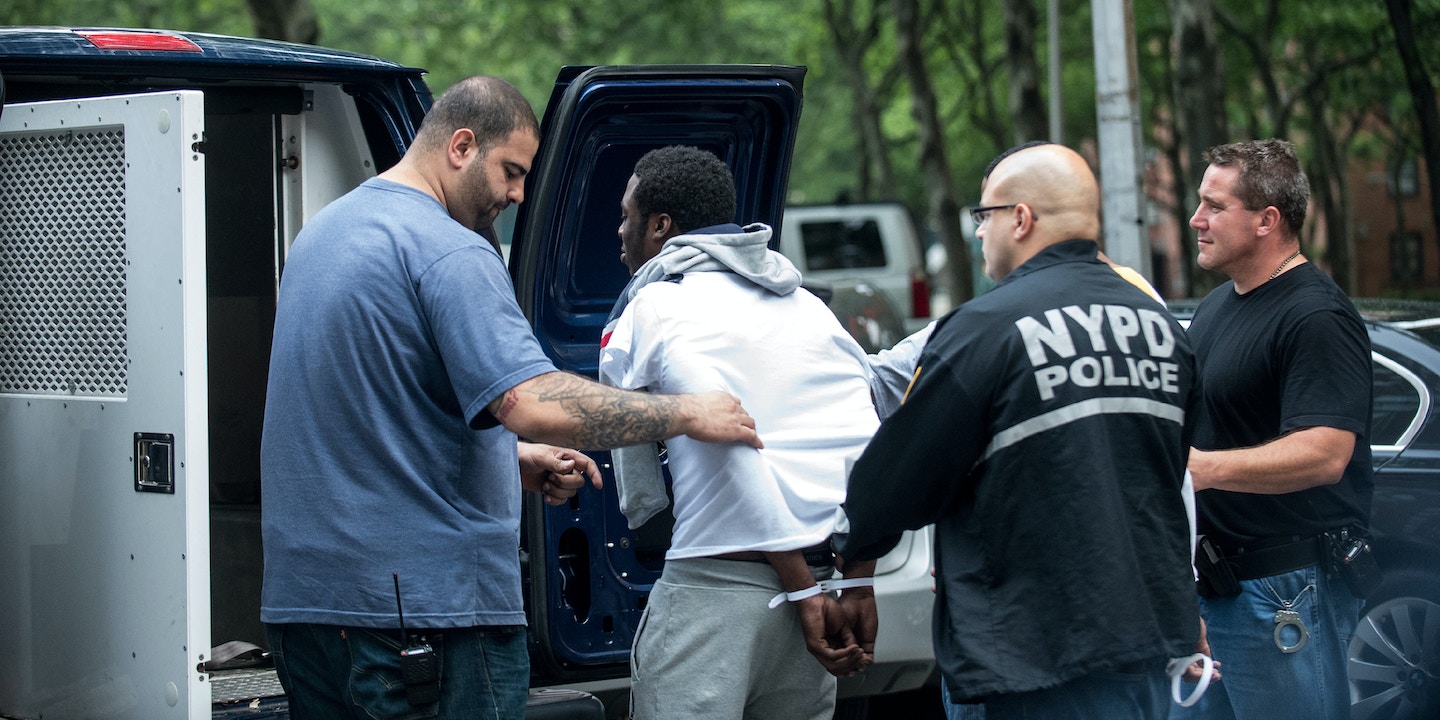 The New York Police Department has quietly expanded its gang database under Mayor Bill de Blasio, targeting tens of thousands of young people of color for increased surveillance even in the absence of criminal conduct.

New Yorkers have been added to the NYPD gang database under de Blasio at a rate of 342 people per month, nearly three times the rate of the prior decade. That’s despite both historically low crime levels and the fact that gang-motivated crime makes up less than 1 percent of all reported crime in New York City.

New details about who the NYPD includes in the vast database were revealed in response to a public records request by CUNY School of Law professor Babe Howell, who shared the information with The Intercept. The data reveals that as of February 2018, there were 42,334 people in the database — a 70 percent increase since de Blasio took office in January 2014. Ninety-nine percent of those added over that four-year period were not white. The NYPD also maintains a database of “inactive” gang members that includes 2,706 people. The NYPD differentiates between crime committed to advance the interests of a gang — about 0.1 percent of all reported crime in the city between 2013 and 2017, according to Howell’s analysis — and crime committed by alleged gang members but not on behalf of gangs. According to the NYPD statistics, the latter category of crime doubled between 2013 and mid-2017, but still accounts for only 1.7 percent of all reported crime.

But the results of a separate Freedom of Information Law request suggest that the NYPD’s definition of what constitutes a gang is broad, vague, and disconnected from evidence of criminal activity.

In two presentations released to legal groups and obtained by The Intercept, the department defines a gang as “a group of persons with a formal or informal structure that includes designated leaders and members, that engage in or are suspected to engage in unlawful conduct.”

“That definition, to me, is incredibly problematic,” said Marne Lenox, an attorney at the NAACP Legal Defense and Educational Fund, one of the groups behind that records request. “They’re not even talking necessarily about a group of individuals who have already been found to have engaged in particular conduct. They’re talking about a group of people who may not have actually done anything criminal.”

While it’s not clear whom the presentations are intended for or how the department uses them, the slides list sweeping criteria to identify gang members — including “staying out late” and “changes in behavior,” as well as the use of video games, SnapChat, and Instagram — that could easily apply to most teenagers and young adults.

In one slide, the NYPD lists organized gangs as well as “crews,” which the department defines as “a group of people associated or classed together: company, set, team, dang group, gang,” with “no initiations” and “no consequences if you leave.” Another slide notes that “younger gang members are often receiving ‘training’ while incarcerated, making them better criminals when they re-enter the community.” In other slides, the NYPD lists colors associated with major gangs: black, gold, yellow, red, purple, green, blue, white, brown, khaki, gray, orange, and lime green. “I don’t think there’s a single color that exists on the color spectrum that would not fit into one of those potential gangs,” said Lenox.

Together, the new details about the gang database and the two presentations offer a glimpse of a sweeping surveillance effort by the NYPD, which has been collecting and cataloguing information about mostly young men of color with virtually no oversight or public scrutiny. On Wednesday, the City Council’s Committee on Public Safety will hold a hearing about the city’s gang policing practices after dozens of community and advocacy groups demanded more transparency from the NYPD. A rally against the department’s large gang raids is planned ahead of the hearing.

“What we know based on the FOIL request shows how important it is to demand transparency about what we don’t know,” said Howell, who first exposed details about the New York gang database in 2013. “There’s no crime to justify it. … It’s just a new way to profile the usual suspects that insulates them from public scrutiny and public approbation.”

Neither the NYPD nor the mayor’s office responded to The Intercept’s requests for comment.

Gang databases nationwide have increasingly come under scrutiny, particularly as President Trump’s exaggerated denunciations of the MS-13 gang have raised skepticism about the broad use of the label, and after immigration authorities have used gang databases to target undocumented individuals for deportation regardless of their criminal history. As these databases have grown more common, so have reports of the many errors they contain: CalGang, a database widely used in California, listed 42 infants under the age of 1 as active gang members.

So far, the NYPD has not made public the criteria it uses to add individuals to the database or details of how the list is used, shared, purged, or corrected. Individuals do not receive notification when they are added to the database, and there is no clear process to contest one’s inclusion in it. It’s also not clear to what extent the database has contributed to a series of large gang raids in recent years that have seen hundreds of NYPD and federal officers descend on public housing projects to make dozens of arrests. As The Intercept has reported, the raids have led to mass gang indictments in which prosecutors have used conspiracy statutes to punish entire communities for the crimes of a few. In 2016 alone, the NYPD conducted 41 “gang takedowns,” leading to more than 1,000 arrests. “We’re picking them off one by one, in many cases, dozens by dozens,” Commissioner James O’Neill said a January 2017 press conference.

As the NYPD gang database has ballooned in recent years and its impact on city residents has become evident, several organizations have filed public records requests that the NYPD has mostly stonewalled.

The Legal Aid Society, which along with a number of community organizations had demanded the NYPD release details of how the database is maintained and purged, has filed an administrative appeal and threatened litigation after the department failed to comply with the request. Legal Aid also launched a website to help New Yorkers file public records requests to learn whether they are listed in the database. Separately, the NAACP Legal Defense Fund and the Center for Constitutional Rights also filed an administrative appeal after the NYPD rejected the bulk of two requests seeking information on safeguards to the constitutional rights of individuals included in the database.

“We knew that since the announcement of Operation Crew Cut, more and more people would be fed into the gang database,” said Anthony Posada, supervising attorney with Legal Aid’s Community Justice Unit, referring to the NYPD program that effectively launched the department’s war on gangs in 2012. “Specifically, black and Latino youth all across New York City.”

“[The data] confirms to us what we were suspicious about and wanting to know more about,” Posada added. “It is confirmation that there are these active programs … that really destroy the ability to build community trust — that are secretive, that are unconstitutional, that label people without an ability for them to be removed from that data.”

Police officers from New York City’s 73rd Precinct confront a group of residents in Brownsville, Brooklyn, on Aug. 22, 2013. Brownsville was considered a hotspot for the NYPD’s stop-and-frisk program.

Critics of the gang database say it’s no coincidence that the NYPD’s emphasis on gang policing intensified just as the city faced a class-action lawsuit challenging the constitutionality of the department’s stop-and-frisk program — which at its height in 2011 saw 684,330 people stopped in one year. In 2013, a federal judge ruled stop and frisk unconstitutional. But by then, the NYPD had doubled its anti-gang units and begun monitoring suspects’ Facebook and YouTube activity — the first steps toward what has since expanded into a sprawling and sophisticated gang surveillance program.

“Before the gang database, it was actually called the gang book,” said Vidal Guzman, an organizer with JustLeadershipUSA, a prison reform group run by formerly incarcerated people. “Every precinct had basically a gang book, knowing who was who around a neighborhood, who was doing what, who was a leader.”

“The gang database, I call it the stop and frisk 2.0 because it just evolved,” added Guzman, who grew up in poverty and was first incarcerated when he was 16 years old. “If we can’t stop these individuals every moment, we’re just going to create a database where we are able to target the people that we can’t stop, and still see what they are doing without them even knowing.”

“They’re using ostensibly nonracial criteria — like the style of dress, neighborhood, where you hang out — to profile the very same communities that they were over-policing under the stop-and-frisk regime, in the absence of any criminality,” said Howell.

“The NYPD’s gang takedowns are the functional equivalent of the department’s unconstitutional stop-and-frisk policing tactic, and they’re regularly criminalizing innocuous behavior, much like stop-and-frisk policing used to do,” echoed Lenox. “None of this is to say that stop and frisk is over; but to the extent that the NYPD is touting the extraordinary decline in the number of people who are stopped by police, it’s incredibly interesting that as those stops decrease, the number of people identified as gang members increases dramatically.”

De Blasio, who came into office promising a “new progressive era” for New York City, has benefited from both falling crime rates and the declining numbers of police stops that followed the stop-and-frisk ruling. But critics say that the mayor continues to support policies — like the NYPD’s so-called precision policing and its sweeping gang investigations — that criminalize poor communities of color and contribute to mass incarceration.

“What we are seeing in the de Blasio era is that he has not only continued Bloomberg’s policies, but he has actually made them much more Orwellian and much more secretive,” said Josmar Trujillo, a community organizer who has advocated against the NYPD’s mass gang raids.

Howell warned against limiting demands for transparency to the gang database, highlighting the department’s shifting tactics. “If we say, you can’t keep a gang database, they will simply call it an intelligence database. Or move it into some algorithmic, predictive model and throw everything from everywhere into it,” said Howell. “What we really need to think about is, What is all this surveillance that the NYPD is doing? What is the limit on that surveillance?”

Top photo: Members of the NYPD Gang Division raid the Manhattanville Houses and the Grant Houses early on the morning of June 4, 2014, holding warrants for more than 100 people wanted in connection with gang-related offenses.