Would You Serve a Cheeseburger to Sarah Huckabee Sanders? Where’s Your Line in the Sand?

Whether or not you agree with the refusal to serve Trump officials, the United States is far less politically stable than any of us truly understand. 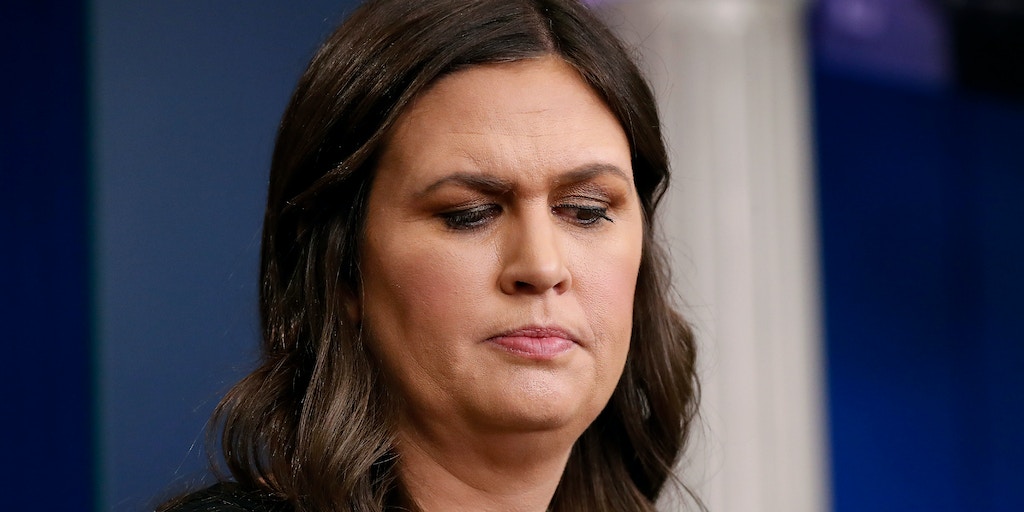 White House press secretary Sarah Huckabee Sanders pauses while speaking to the media during the daily press briefing at the White House on June 14, 2018.

How evil does someone have to be before you’d find it generally acceptable for a restaurant or business to refuse them service? Where’s your line in the sand? What if they killed the owner’s children? What if they burned your house down? Stole from your mother and punched her in the face? Should the owner, just out of good, old-fashioned decency, still serve them?

Would you cook dinner for Hitler? How about Osama bin Laden? Is that too much?

Where’s your line in the sand? Would you cook dinner for Hitler? How about Osama bin Laden? Is that too much? Is that your breaking point? At what point is it acceptable to say, “You know what? I cannot, in good conscience, serve this person a meal. This person is inhumane and dangerous, and I want no part of making their life better or easier.”

The move has been universally panned as cruel and excessive by conservatives. A sizable chunk of Democrats agree. Others have celebrated it, and other moves like it, as a necessary response to the actual evils of the Trump administration.

The Trump administration, after all, is not a nebulous, nameless, faceless enterprise, but a collection of actual people who make consequential decisions that affect the lives of very real people.

My basic feelings about Sanders mirror those of the restaurant owner in Virginia: I see her as a spokesperson for a truly evil man. She protects his lies. She defends his most vile policies that cause actual harm. She defends his decisions to forcefully separate infants and children from their parents at the American border. She deflects and dodges and lies about the scores of women that have accused Donald Trump of sexual assault and harassment. She defends Trump’s complete inaction on gun control. The list goes on and on.

She’s not simply serving our country or following orders. She opted into this position and thinks on the fly about how to defend Trump’s worst actions on a daily basis. I see what Trump has done, ordering the forced separation and detainment of families, with infants and children now sent all over the country, thousands of miles away from their parents, as right up there with the worst human rights abuses of recent years. When Sanders defends it, as a member of the administration, she is absolutely complicit.

And let’s be clear: I don’t see her as evil because she’s a Republican or a conservative, but because she enables and protects an evil man. Passersby gather to take photos in front of the Red Hen Restaurant on June 23, 2018, in Lexington, Va. White House press secretary Sarah Huckabee Sanders said Saturday in a tweet that she was booted from the Virginia restaurant because she works for President Donald Trump.

When I saw a video of someone walking up to and punching Richard Spencer, a leading American white supremacist, I understood why many cheered and loved it. Spencer is a horrible human being, and seeing a horrible human being get karma scratches a sick type of primal itch. Yet I was disturbed by it. I loathe Spencer, but when I saw a man who people hate — even rightly — getting randomly pummeled by a stranger in public, the first thing I wondered was how long it would be before people who hate me take that as an excuse to pummel me when I’m in public. When we resort to random acts of violence, or celebrate them, we degrade the standards for all of us. It’s a slippery slope.

The United States is far less politically stable than any of us truly understand.

Now, physical violence is something altogether different than peacefully asking a person to leave your restaurant. Sanders, after all, celebrated the recent Supreme Court decision which seems to protect the rights of a baker to refuse service to LGBTQ patrons. The decision of a local restaurant to refuse her service based on politics would seem to at least be in the same ballpark as that decision. She seemed to love the idea of exclusion when it didn’t apply to her.

All of this, though, shows the perilous path we’re going down. I say this often, but I think the United States is far less politically stable than any of us truly understand. We live in the time where immigrants are being detained in camps, where their children are being shipped off to strangers across the country, and where restaurants are refusing to serve those who supported such actions.

I think the restaurant in Virginia was right to ask Sanders to leave. I think protesters were right to heckle Homeland Security Secretary Kirstjen Nielsen, as she ate dinner at a Mexican restaurant, over her role in our current humanitarian crisis. I think it’s right to yell “fascist” at White House adviser Stephen Miller as he eats dinner.

None of us should be silent, or even courteous, about the horrors going on in our country. I just know that it’s probably going to get worse from here.