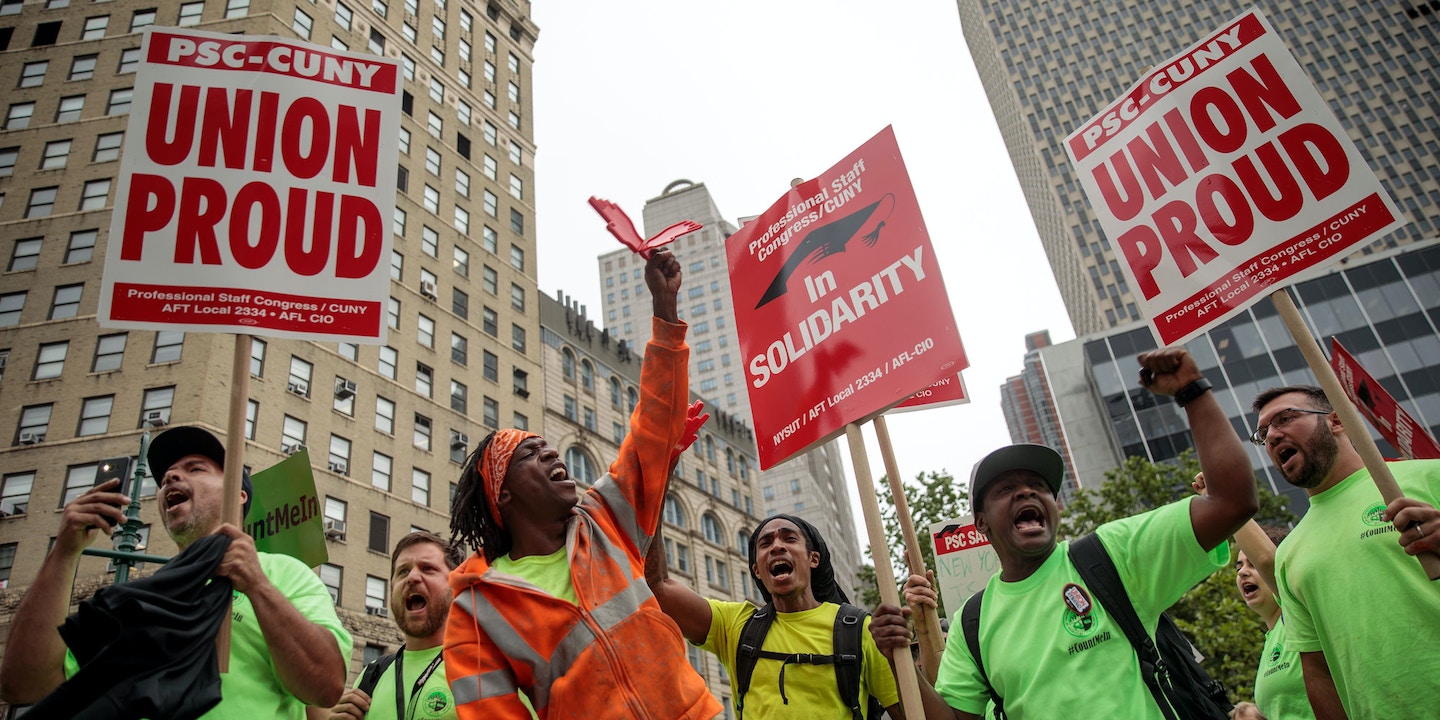 Janus v. AFSCME resolved whether agency fees, also known as “fair-share fees,” can be collected from public-sector employees who do not wish to be members of a union. Under the law, a public-sector union has to represent all workers in a workplace, irrespective of whether they opt to be union members. Charging agency fees has historically enabled unions to avoid the free rider-problem — without them, employees could enjoy the benefits of collective bargaining without paying the dues required to support union activities.

This week, the Supreme Court affirmed that no agency fee or any other form of payment can be deducted from an employee, “nor may any other attempt be made to collect such a payment, unless the employee affirmatively consents to pay.” The decision has immediate ramifications for the nearly 7 million state and local government workers represented by a union, of which 58 percent are women and 33 percent are African-American, Asian-American, Pacific Islander, and Latino. There are 17.3 million public-sector workers across the nation.

For more than 40 years, the Supreme Court has held that there’s a constitutional difference between a union’s political activities and its collective bargaining work. Compelling workers to fund the former would infringe on their freedom of speech, the court ruled in 1977 in a unanimous decision known as Abood v. Detroit Board of Education. But, the justices determined in Abood, requiring agency fees to support collective bargaining work was constitutional. Now the court has taken a knife to that distinction.

Many expected this outcome two years ago, when the court heard Friedrichs v. California Teachers Association, a case in which 10 public school teachers challenged the constitutionality of their mandatory agency fees on First Amendment grounds. While the 9th Circuit Court of Appeals disagreed with the teachers’ position, the Supreme Court seemed inclined to side with the challengers. But when Justice Antonin Scalia unexpectedly died in February of 2016, the court ended up issuing a 4-4 decision, preserving the 9th Circuit’s ruling. On Wednesday, the conservative members of the court got a second bite at the apple.

Writing for the majority, Alito was extremely dismissive of AFSCME’s argument that labor organizations will be less effective if agency fees are struck down. To support its case, Alito pointed to the 28 states that currently have laws on the books prohibiting agency fees as proof that those fees are not essential to avoid conflict between competing labor advocacy groups — something both U.S. employers and American labor law discourage.  Even without agency fees, Alito argues, workers in 28 states enjoy exclusive representation.

“Whatever may have been the case 41 years ago when Abood was decided, it is thus now undeniable that ‘labor peace’ can readily be achieved through less restrictive means than the assessment of agency fees,” the majority opinion reads.

When it comes to the free-rider problem, the court was similarly dismissive, citing the arguments raised by unions as “insufficient to overcome First Amendment objections” and not representing a compelling state interest to begin with.

In the dissent, authored by Justice Elena Kagan and joined by Justices Ruth Bader Ginsburg, Stephen Breyer, and Sonia Sotomayor, Kagan writes that the majority “fails to reckon with how economically rational actors behave.” She argues that the majority ignores the basic fact that public-sector unions must represent all workers in a workplace, in contrast to private groups that can choose to represent only those who actively opt-in. Kagan also notes that the “Court today wreaks havoc on entrenched legislative and contractual arrangements,” rendering thousands of city, county, and state contracts across the country illegitimate. In other words, previously existing collective bargaining agreements in the public sector will now need to be re-negotiated, many of them all at once. New York City, for example, currently has agency fees in 144 contracts with 97 different public-sector unions. “[The majority dismantles these agreements] with no real clue of what will happen next — of how its action will alter public-sector labor relations,” the dissent states. “It does so even though the government services affected — policing, firefighting, teaching, transportation, sanitation (and more) — affect the quality of life of tens of millions of Americans.”

“The Supreme Court has freed millions of American workers from manipulation by union bosses that misrepresent their interests,” said Tim Huelskamp, president and CEO of the right-wing Heartland Institute, in a statement. “On the heels of this decision, every state should move quickly to certify that no American worker is ever compelled to give their hard-earned money to support self-serving union bosses.”

The plaintiffs in Janus and the cases that helped lay the legal foundation for it were supported by a web of conservative legal advocacy groups and right-wing foundations, including the Center for Individual Rights and the National Right to Work Legal Defense Foundation.

In a statement released after the Janus decision, Lee Saunders, president of AFSCME, declared that “despite this unprecedented and nefarious attack” the “American labor movement lives on, and we’re going to be there every day, fighting hard for all working people, our freedoms and for our country.”

Randi Weingarten, president of the American Federation of Teachers, echoed the dissenting judges, calling the Janus decision “a warping and weaponing of the First Amendment, absent any evidence or reason, to hurt working people.”

While unions are resolving publicly to fight back, they have also begun to prepare for the worst. The National Education Association, for example, which is the nation’s largest public-sector union, is forecasting a loss of 307,000 members over the next two years, and is planning to reduce its expenditures by $50 million during that period. There are currently 3 million members in the NEA.

Progressive economists say that Americans should expect to see economic inequality increase as public-sector unions adjust to a post-Janus world. According to the left-leaning Economic Policy Institute, “[a]s union membership has fallen over the last few decades, the share of income going to the top 10 percent has steadily increased.” When union membership peaked at 33.4 percent in 1945, the share of income going to the top 10 percent was 32.6 percent. By 2011, when union membership was down to 11.1 percent, the share of income going to the top 10 percent reached 48 percent. The gap is even more stark when it comes to wealth: In 2017, the top 1 percent of American households owned 40 percent of the nation’s wealth, a higher share than at any point since 1962. The top 1 percent owns more wealth than the bottom 90 percent combined. EPI attributes these trends to the lack of bargaining power that non-union workers have to negotiate their wages, among other factors that have made wealth distribution more unequal.

The Janus decision, though long expected, begets a new period of uncertainty in American labor relations. As The Intercept previously reported, some labor activists, like those in the International Union of Operating Engineers, argue that Janus may have some unintended consequences that empower unions. If, as per Janus, collective bargaining is speech, then it is subject to powerful First Amendment protections. The majority may have inadvertently opened up the floodgates for countless new union-led lawsuits against governments that try to restrict their speech, by, for example, limiting the scope of their contract negotiations to predefined topics. Dismantling Abood, they say, could open “a tremendous Pandora’s box.”