In the J20 Trials, the Feds Said They Went After “Bad Protesters.” That Just Means Another Crackdown on Dissent.

Despite not winning jury convictions, putting hundreds on trial is sure to chill dissent — and the crackdown is only just beginning. 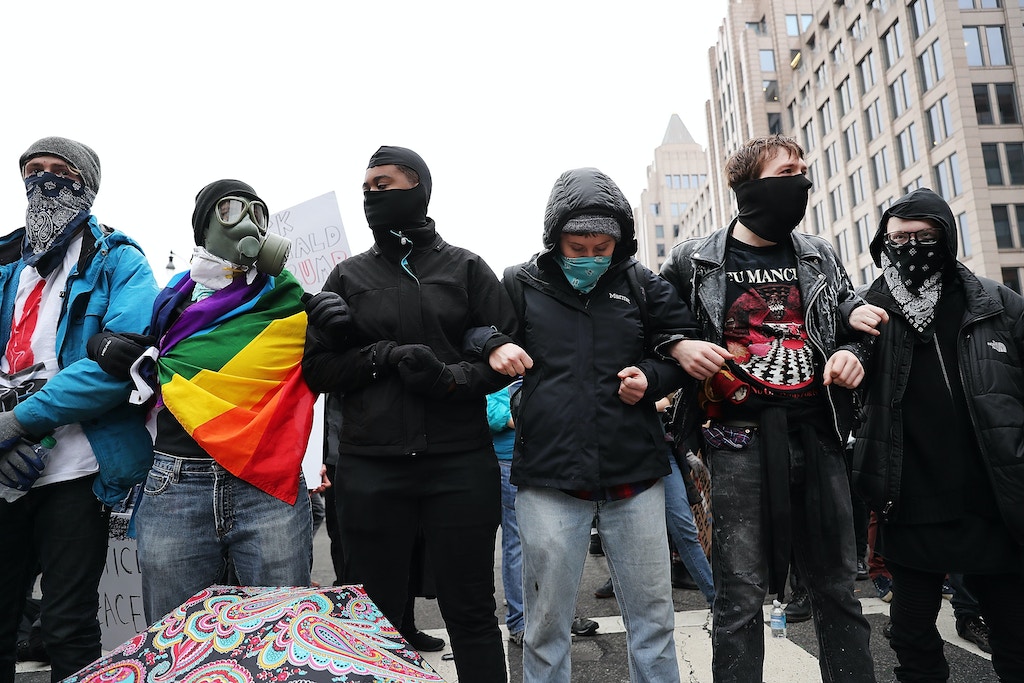 The last remaining defendants in the J20 trials, who faced a raft of charges related to a mass arrest on Inauguration Day, can breathe a sigh of relief. Last week, federal prosecutors decided to drop all remaining felony charges against the protesters, who faced decades in prison for rioting and conspiring to do the same. To defenders of First Amendment rights, the government’s failure to win convictions was a victory: The prosecutors’ novel theory of collective liability — that mere presence at a demonstration in which property damage occurred constituted a planned criminal offense — fell apart.

The cases were an outrage and an embarrassment from the moment D.C. police swept up over 200 people on the corner of L and 12th streets in Washington — a protest in which I took part, but was not arrested. Prosecutors scrambled and made underhanded moves, including withholding evidence and using far-right propaganda as purported evidence of a conspiracy.

Despite the complete absence of any convictions at trial, the government did notch some victories against the defendants. The prolonged and failed prosecution — an ordeal for those who lived through it — drained resources for activism from day one of Donald Trump’s presidency.

The J20 prosecutions were a troubling example of how the government will use the idea of the “bad protester” to shut down dissent.

Yet the J20 narrative is more complex than a simple victory for protected speech over government repression. It was a troubling example of how the government will use the idea of the “bad protester” to shut down dissent. Aaron Cantú, a journalist and J20 defendant who was among the last to have his charges dropped, tweeted, “The state shamelessly weaponized the ‘good protester/bad protester’ narrative in this case. It’s time to put it to rest.”

This effort will not end with its failure to convict the J20 arrestees: Just this June, Republicans on Capitol Hill introduced the Unmasking Antifa Act of 2018 in the House Judiciary Committee. The bill is unabashed about its target. It calls for fines and a prison sentence of up to 15 years for anyone who “injures, oppresses, threatens, or intimidates any person” while wearing a mask or disguise — a bill that telegraphs the government’s future attempts to prosecute the masked protesters they failed to criminalize on Inauguration Day.

There can be no mistake that the Unmasking Antifa Act seeks to further criminalize anti-fascist protests against far-right extremists and neo-Nazis — it’s right there in the name. “It seems to be a way to prepare for the next J20-style repression to actually work,” Mark Bray, author of “The Anti-Fascist Handbook,” noted in a report from the Black Rose Anarchist Federation.

That anti-fascist demonstrators frequently wear masks for fear of harassment and retaliation from white supremacists unveils an irony in the bill’s focus on “antifa”: Many pre-existing state laws that make wearing masks illegal in certain contexts were aimed at Ku Klux Klan members. While anti-masking laws are not uncommon and have often been used in the past to arrest leftist and anarchist protesters, the weight of sentencing proposed in the new bill raises the stakes considerably and exemplifies efforts under the Trump administration to protect the speech of fascists and condemn that of anti-fascists. Legislative proposals of this sort illustrate that the government’s delineation of the “bad protester” during the J20 trials is far from put to rest and is firmly focused on the left.

The prosecution in the J20 cases attempted to paint every arrestee as a “bad protester,” in most cases drawing only on the fact that a defendant wore a mask, dressed in black, and remained in the march from its start to its end in police nets. For the majority of the defendants who engaged in no property damage at all, it might have been tempting to assert that they were in fact the law-abiding “good protesters,” while actively condemning and drawing attention to the actions of a few window-breakers.

Yet the J20 trials provided an anecdote, a lesson in collective resistance, and a refusal to allow government and law enforcement narratives about “good protesters” and “bad protesters” to prevail. While many will disagree with the ethics or value of property damage as a protest tactic, the defendants’ united front meant the government could not weaponize co-defendants to bolster their weak case.

“Two-hundred-plus people resisted these charges and got out. Our solidarity inside and outside the courtroom saved us and protected each other.”

“I’m glad no one went to prison from this case. The case was bullshit from day one. Two-hundred-plus people resisted these charges and got out,” Dylan Petrohilos, a Washington-based activist and former J20 defendant, told me. “Our solidarity inside and outside the courtroom saved us and protected each other.” All but 21 defendants refused to take plea deals, and no one cooperated with the state against another protester.

The legal risks to protesters have been brought to new heights by the significant rise in anti-protest laws around the country since Trump’s inauguration. In February, the National Lawyers Guild noted that 58 bills had been proposed in 31 state legislatures. If passed, they would “crack down on dissent, chill the right to protest, and increase penalties for demonstrators and the organizations that support them,” the guild said.

The prosecution of protest, as in the J20 cases, takes a practical and ideological toll on a movement: It forces arrestees and their allies to shift focus from the reasons and righteousness of their demonstration — in the case of J20, an explicitly anti-fascist show of resistance against the inauguration of a white supremacist administration — to a focus on proving the legality and constitutionality of their actions. As such, even failed prosecutions serve the administration by diverting the energies of a movement and fixing them within the terrain of criminal justice.

We can be sure that the government will not take its failure in the J20 prosecutions quietly and dial back anti-resistance repression. In its statement announcing the dismissal of the remaining charges, the U.S. attorney’s office continued to defend its infirm prosecution. “The destruction that occurred during these criminal acts was in sharp contrast to the peaceful demonstrations and gatherings that took place over the Inauguration weekend in the District of Columbia,” the statement said,” and created a danger for all who were nearby.”

The rhetoric of dangerous protesters as a contrast to “peaceful demonstrations” will continue to undergird government’s anti-resistance, anti-anti-fascist efforts. But at least we have the guiding example of the J20 defendants to follow when it comes to responding with solidarity and resilience. “The state failed at silencing dissent,” said Petrohilos, “and today our movement is stronger than it was on J20.”