Putin Says He Misspoke Too, Withdrawing Claim Clinton Got Millions Stolen From Russia

Like Donald Trump, Vladimir Putin said he got just one tiny word wrong during their news conference, but it was enough to dash the hopes of Trump supporters. 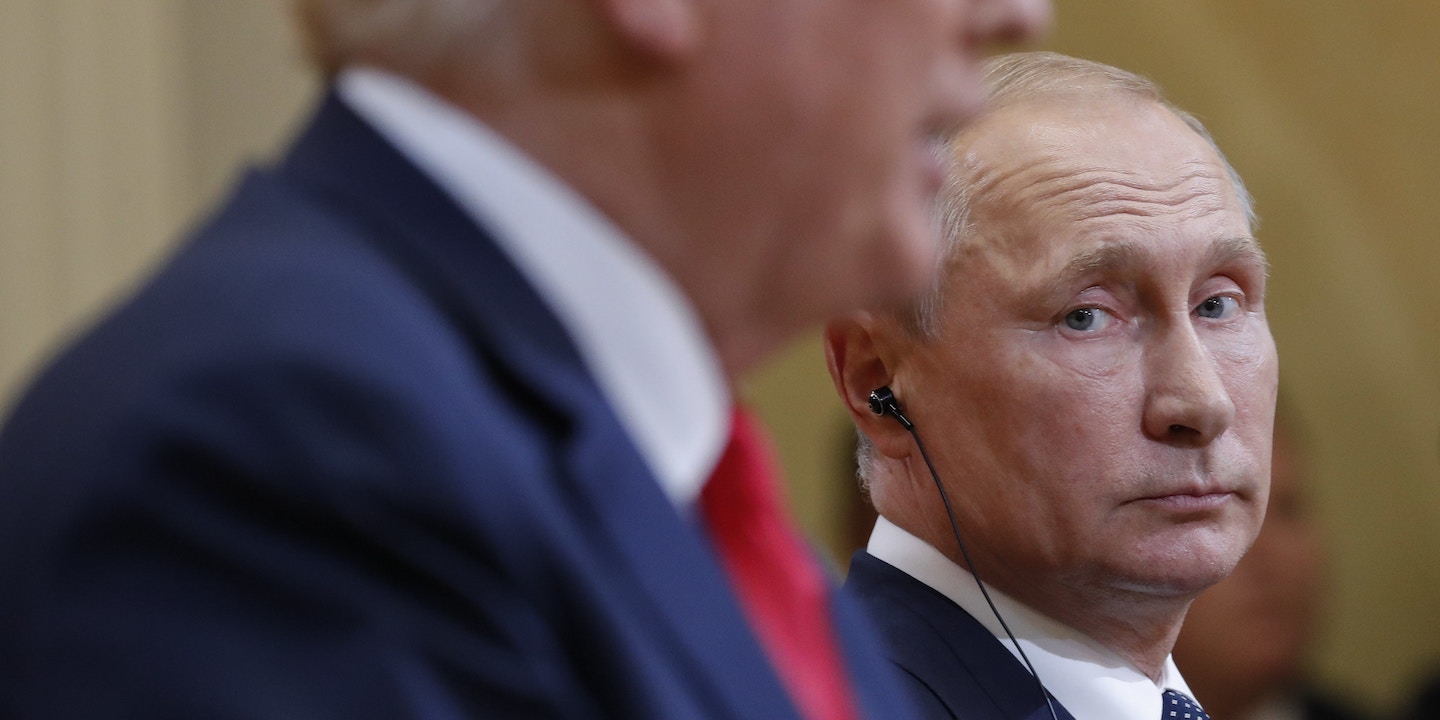 The Russian president, Vladimir Putin, dashed the hopes of conspiracy theorists across America on Tuesday by withdrawing the startling claim he made the day before in Helsinki, that Hillary Clinton’s campaign had received $400 million in donations from investors accused of tax evasion in Russia.

What he had intended to say, according to a Russian government spokesperson, was that business associates of the U.S.-born investor William Browder had donated $400,000 to Clinton’s campaign. (According to public campaign finance records, that figure also appears to be inflated.)

Alexander Kurennoi, a spokesperson for Russia’s prosecutor general, told reporters that Putin stood by his demand that the United States should make Browder, and a number of former American diplomats and intelligence officers described as his accomplices in a criminal plot, available for questioning.

Did Presidents Trump and Putin discuss the Americans that Russian authorities want to question? “There was conversation about it, but not a commitment made by the United States,” Sanders says https://t.co/JJgYHR8kWv pic.twitter.com/Lz9alx69ol

Asked by Maggie Haberman of The New York Times, “Does President Trump support that idea — is he open to having U.S. officials questioned by Russia?” Sanders did not rule it out, saying the president would consult his advisers, “and we’ll let you know when we have an announcement on that.”

As The Intercept reported on Monday, Putin had made the request public during a remarkable joint news conference with his American counterpart, Donald Trump, when he suggested that it would be the price for Russian cooperation with Special Counsel Robert Mueller’s investigation.

If Mueller’s team wanted to take him up on what Trump described as “an incredible offer” made during their private meeting, there would be one “condition,” Putin said. “We would expect that the Americans would reciprocate, and they would question officials, including officers of law enforcement and the intelligence services of the United States whom we believe have something to do with illegal actions on the territory of Russia.”

“According to our investigative officers, a group of people — Mr. Browder’s business partners — who illegally made over $1.5 billion in Russia, did not pay taxes, either in Russia or the United States, but transferred this money to the United States,” Putin said, according to a Kremlin transcript. “They contributed $400 million to Ms. Clinton’s election campaign. This is official information included in their reports — $400 million.”

“We have grounds to suspect that U.S. intelligence officers supported these illegal transactions,” Putin added. “So we have an interest of questioning them. That could be a first step.”

On Tuesday, just as Americans were trying to get their heads around Trump’s bizarre claim that he’d accidentally said the opposite of what he meant at the news conference in Helsinki, the spokesperson for Russia’s prosecutor general said, “Our president asked us to correct the sum.” Putin, however, stood by his demand for cooperation in pursuit of what the prosecutor’s spokesperson called, “Browder’s criminal group.”

Among those wanted for questioning, the spokesperson said, were employees of the National Security Agency, Homeland Security, the CIA, a former aide to the House Foreign Affairs Committee, three former State Department officials and McFaul, the former U.S. ambassador to Russia. The Russian officials also wanted the Trump administration’s help in getting to Christopher Steele, the former British spy who compiled a dossier alleging illicit contacts between Russian officials and the Trump campaign.

In an interview with Fox Business after the summit, Browder seemed delighted to have provoked Putin’s ire.

Browder pointed out that another name on the list of suspects the Russian prosecutor general asked to speak to was Kyle Parker, the former congressional staffer who drafted the Magnitsky Act.

One of the other Americans Putin asked for in his quid pro quo with Trump in Helsinki in connection to the 12 GRU agents was Kyle Parker. @kyleparkernet is the congressional staffer who single handedly drafted the Magnitsky Act that Putin hates so much pic.twitter.com/ao4QSDSHHX

McFaul, who was former President Barack Obama’s representative in Moscow, had asked the White House press corps to find out if Putin had asked Trump to turn him over for interrogation during their private meeting in Helsinki.

Hey WH press Corps, can you confirm tomorrow with @PressSec that Putin discussed me personally in his one on one with Trump? Did he suggest that I was part of some alleged money laundering scheme? And did Trump push back on this completely invented , whacko idea?

The fact that Trump did not rule out having former officials questioned by Russia stunned many observers.

For those keeping score at home, this means Putin asked the President to let him get his hands on a former US ambassador to Russia, @McFaul, and man who successfully lobbied for one of the primary sanctions against Russia. And the WH can’t say how POTUS responded. Remarkable. https://t.co/Ly3vPuP2vS

But it should be no surprise that Trump would consider Putin’s request to subject Obama administration officials to interrogation. What Putin claims, that there was a “deep state” plot in favor of Hillary Clinton, is exactly what Trump has been tweeting about since he took office.

Putin’s conspiracy theory, quickly accepted as fact by Trump supporters, was just the latest phase of a long campaign by his government to tarnish Browder’s image. That campaign commenced after Browder’s tax lawyer, Sergei Magnitsky, died in custody after accusing Russian officials of corruption.

In retaliation, Browder successfully lobbied Congress to pass the Sergei Magnitsky Rule of Law Accountability Act in 2012, which froze assets and imposed visa sanctions on those involved in Magnitsky’s detention, as well as other Russians “responsible for extrajudicial killings, torture, or other gross violations of internationally recognized human rights.” Putin responded to the Magnitsky Act by ending American adoptions of Russian children.

Putin’s claim that Clinton took illicitly gained money from Browder associates is particularly interesting because it appears to be a reference to the supposed “dirt” on Clinton offered by Natalia Veselnitskaya, a Russian lawyer with ties to Russia’s prosecutor general, at a June 2016 meeting in Trump Tower with Trump’s son, Don Jr., son-in-law, Jared Kushner, and campaign manager, Paul Manafort.

At the meeting, Veselnitskaya pushed the Trump campaign team to repeal the Magnitsky Act and she shared a memo portraying political donations from the principals of one of the firms that invested with Browder, Ziff Brothers Investments, as evidence of corruption. However, campaign finance records show that Clinton received just $17,700 from Ziff Brothers and its employees. The firm did donate $296,966 to the Democratic National Committee, but records show it also funded Republican campaigns, and gave $200,000 to a Republican political action committee.

Putin’s initial claim that $400 million had been laundered through Clinton’s campaign earned an approving nod from the listening Trump, and electrified Clinton’s sworn enemies, who continued to share the incorrect figure online even after the Russian president had attempted to correct the record.

Interesting what parts of the Trump/Putin press conference the media refuses to mention. For instance, when Putin mentioned that Hillary pocketed $400 million in illegal contributions (bribes?) in tax-free Russian money through her foundation. #Helsinki2018 #summit

Had she won and he said that about Trump, #DOJ would have already indicted.

Sea level rose 3 feet today from liberal tears when Putin announced 400 million was stuffed in HRC’s campaign by a crook. Yet all we hear is “impeach 45”. ????

Putin: US intelligence aided a Russian criminal to funnel $400 million to Hillary Clinton's campaign. Why is the US press not interested in this bombshell?... https://t.co/0A7IUz3elP

Updated: 4:02 p.m. EDT This report was updated to add the White House Press Secretary’s admission on Wednesday afternoon that Vladimir Putin had asked Donald Trump to interrogate the Obama administration’s ambassador to Russia on his behalf, and Trump did not say no.