You Say You Want a Revolution? The Anti-Capitalist Film “Sorry to Bother You” Shows the Way 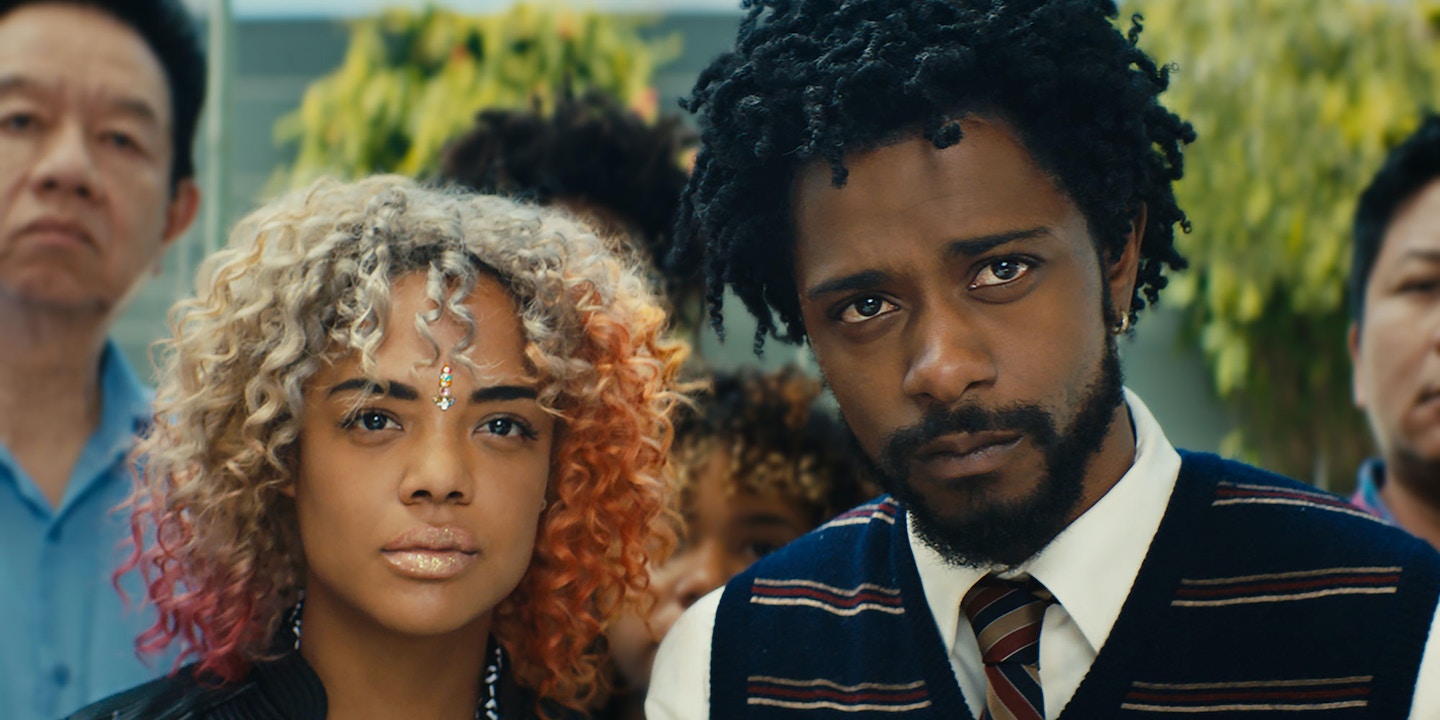 In a partisan nation often consumed with a fight over the corporate center, identifying as an anti-capitalist can make for a lonely existence. But things are changing.

The revolution may not be televised, but it’s certainly influencing content.

Since her stunning primary victory, 28-year-old congressional nominee Alexandria Ocasio-Cortez has successfully pitched democratic socialism to middle-American audiences on late-night shows, daytime TV, and, in defiance of skeptics, to “red state” Kansas. Recently, New York gubernatorial candidate Cynthia Nixon casually admitted that she sees herself as a democratic socialist — an announcement that was met with surprisingly little controversy. And House Democratic leader Nancy Pelosi is still reeling from the backlash to her tone-deaf dismissal of a poll showing that only 19 percent of people ages 18 to 29 identify as capitalists.

Pelosi’s quip that “we’re capitalists and that’s just the way it is” doesn’t cut it for the increasing number of Americans who see inequality as a feature, not a bug, of our economic system. And now anti-capitalist ideals have broken through to a new medium — as the subject of communist activist, rapper, producer, and screenwriter Boots Riley’s surreal dystopian film “Sorry to Bother You.” 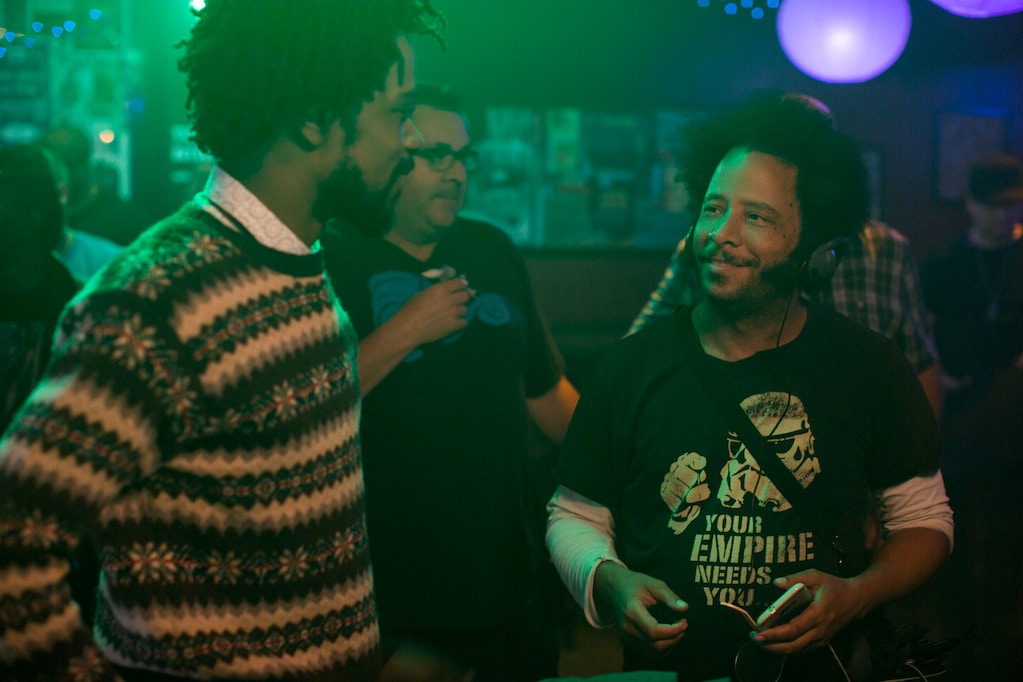 Actor Lakeith Stanfield, left, and director Boots Riley on the set of “Sorry to Bother You.”

The movie centers on a lethargic, underemployed millennial named Cassius “Cash” Green (Lakeith Stanfield), who finds a job at a bleak, basement-level telemarketing company. Cash’s girlfriend Detroit (Tessa Thompson) is a performance artist who also needs part-time work, and soon she, Cash, and Cash’s friend Salvador (comedian Jermaine Fowler) are siloed in adjoining cubicles desperately attempting to sell encyclopedias to Americans who themselves are preoccupied by varying levels of personal or financial turmoil.

“I’m just out here surviving,” Cash tells Detroit early in the film. But years of merely “surviving” have weighed heavily on his psyche. “What I’m doing right now,” he observes, “won’t even matter.”

Cash has been living in his uncle Sergio’s garage and is under threat of homelessness on two fronts: Sergio, played by an always winsome Terry Crews, demands back rent from Cash. But in a move that reflects Riley’s systemic understanding of working-class trials, it’s revealed that Sergio, too, is behind on his rent. Nobody, it seems, can catch a break.

Cash is stupefied by his economic circumstances — cowed by humiliations at home, where a malfunctioning garage door exposes an intimate moment between him and Detroit; at a nightclub, where he’s invisible to VIPs; and before an incredulous gas station attendant, who stares at him with judgement as he asks her to put “40” on the pump while slamming his last 40 cents on the counter. When human value is assigned based on what we can earn, unemployment can become a mental health issue, and both Cash’s financial and psychological outlook are grim.

As he starts to over-perform at work, however, Cash’s ennui begins to lift. He becomes a “top caller” after his cubicle-mate Langston (Danny Glover) advises Cash to use a “white voice” when making calls. Langston explains that a “white voice” is not the high-pitched nasal caricature perfected by 1990s-era black comedians, but something more authentic — a voice that says, “I’d just as soon make my afternoon tennis lesson as this sale,” a voice that sounds genuinely “worry-free,” which, incidentally, is the name of the telemarketing company’s biggest client. The lesson seems to be that you’ve got to have money to make money — at the very least, you have to sound like you do.

As it turns out, Cash is a natural — or rather, he’s supernatural. His “white voice,” provided by David Cross, is purposefully badly dubbed, and the characters in the film perceive it as surreal, magical, and even disturbing.

Soon, Cash is riding an ornate, rococo elevator — voiced by noted Bernie bro Rosario Dawson — from the basement sales floor to the literal and metaphorical top of the company. Here, Cash will be asked to sell items that come with an enormous ethical price tag.

Whereas in most films, the narrative tension would center on whether Cash is justified in “selling out” in order to pay his bills, Riley introduces another, more visceral, element — one that makes the film feel genuinely revolutionary. On the same day that Cash is promoted, a charismatic union organizer named Squeeze, played by Steven Yeun, succeeds in organizing a strike for better wages. The central conflict, then, is between the strikers and Cash, who breaks the picket line each morning with the help of an increasingly militarized police force — at least until the third-act twist tips his conscience. 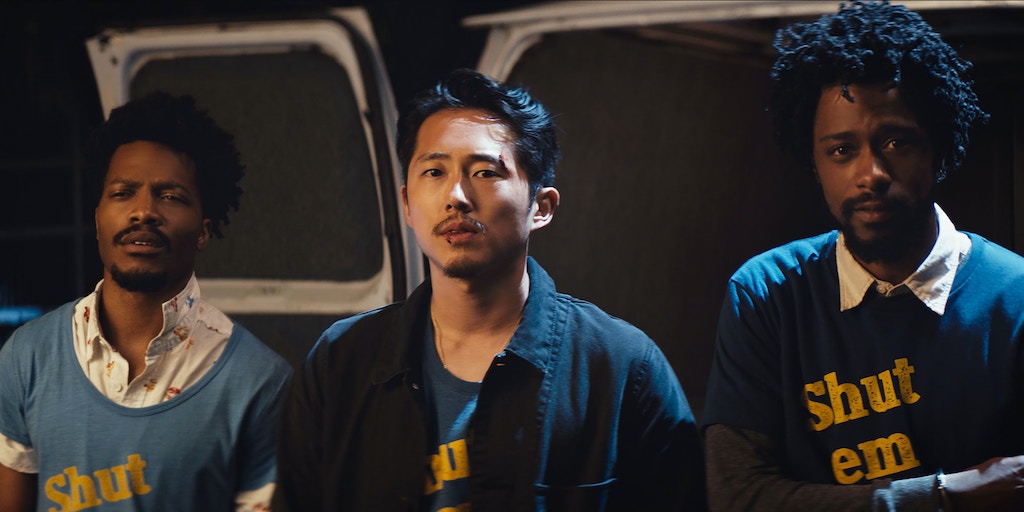 Jermaine Fowler as Salvador, Steven Yuen as Squeeze, and Lakeith Stanfield as Cassius Green star in Boots Riley’s “Sorry to Bother You.”

“Sorry to Bother You” is unique insofar as it is not a story in which our protagonists escape their lowly material circumstances through individual industry, professional grit, or uncommon genius. Rather, it juxtaposes meritocratic excessive wealth with a living wage earned through solidarity. The former comes by chance and accrues only to a chosen few: Cash’s voice is a gift — not something one could work toward — and, because this gift is both profitable and rare, it’s highly valued. By contrast, the telemarketing employees hope to gain a dignified standard of living for everyone by withholding their labor en masse.

This movie differs from classic “rags to riches” tales like “The Pursuit of Happyness” — a moving film, but one which celebrates a poor man’s journey from homeless to stock broker without critiquing the relationship between concentrated wealth and a dearth of affordable housing, or the absurdity of a “meritocracy” that would hinge a family’s survival on a parent’s ability to dazzle an interviewer with a Rubik’s Cube. “The Pursuit of Happyness” is touching because it shows one man overcoming impossible odds. “Sorry to Bother You” is moving because it shows that we don’t have to beat those odds alone.

This framing is no accident. As Riley explained in a series of recent interviews, he’s not interested in performative art or performative politics that aren’t rooted in broader movements. “Progressives and radicals have turned more to spectacle and gone away from actually organizing at the actual point of contradiction in capitalism, which is the exploitation of labor, which is also where the working class has its power,” he recently told Amy Goodman on Democracy Now!. “We’ve gone in favor of demonstrations that don’t necessarily have teeth … and I feel like we have to give these demonstrations more teeth by being able to affect the bottom line.”

The connection between art and a political movement is what makes “Sorry to Bother You” feel revolutionary.

Riley critiqued an anti-Iraq War “die-in” in an interview with Build. The protest, he said, was enacted with the expressed purpose of making people “aware” of the carnage caused by the war. But “everybody knows the war is fucked up,” said Riley, “they just don’t think they can do anything about it. So there’s a different question that needs to be answered by the artists.” He added, “Art has a place, but it has to be connected to actual movements.” That connection is what makes “Sorry to Bother You” feel revolutionary.

After seeing the film, I struggled to recall an instance in which a labor strike had been represented at all in mainstream cinema — much less depicted heroically as in “Sorry to Bother You.” Although other examples exist, the only one I could remember without resorting to Google was “Norma Rae,” a 1979 biopic in which Sally Field played Crystal Lee Sutton, who successfully organized a strike at a southern textile mill.

“Sorry to Bother You” may make more of an impact than “Norma Rae” precisely because it’s not a film “about” organizing, which might come across as didactic or inaccessible to audiences who don’t see themselves as political, or who’d rather avoid a biopic on a Saturday night. By embedding his message in the trojan horse of satirical comedy, Riley has made the indignity of wage labor a part of the public conversation, including among a multiracial demographic that has been excluded from media narratives about the progressive movement, even as we drive it.

The diverse cast challenges the myth that class struggle must come at the expense of nonwhite interests — an increasingly popular characterization among liberals who’ve argued against breaking up the banks because it won’t cure racism, who’ve undermined a “new” New Deal on the basis that racial disparities marred the original, or who’ve implied, even if unwittingly, that the recent teacher strikes in West Virginia, Arizona, Kentucky, and Colorado were somehow at odds with the interests of people of color. But its equally relevant for working-class white audiences for whom a genuinely worry-free “white voice” is inaccessible, too.

Of course, the class struggle is most urgent for those at the bottom of the economic hierarchy, which, due to a legacy of racism, is disproportionately nonwhite. As Terry Crews explained when asked why he took the role:

It reminded me of so many people I grew up with in Flint, Michigan. They’d given up all of their dreams, everything they wanted in life for the security of the factory, and it turned on them. They told you you’re gonna have health care for life, you’re gonna have this for life — everyone was told the same thing: This is for life, y’all. And it went 15 years. And it was over. And everybody was like, “What do I do now?”

Earlier in the interview, Crews summed it up precisely: “This is the movie we didn’t know we needed.”

Today, when the country is being led by a cruel megalomaniac who has been empowered by a decadeslong, corporate-funded attack on democracy, hope can seem elusive, even naive, and political art can seem similarly hollow. Yet when art connects to movements, it transforms superficial hope into something weighty with possibility: a plan.