A Koch brothers-backed economist makes a $3 trillion error, but still finds that “Medicare for All” reduces costs and boosts wages. 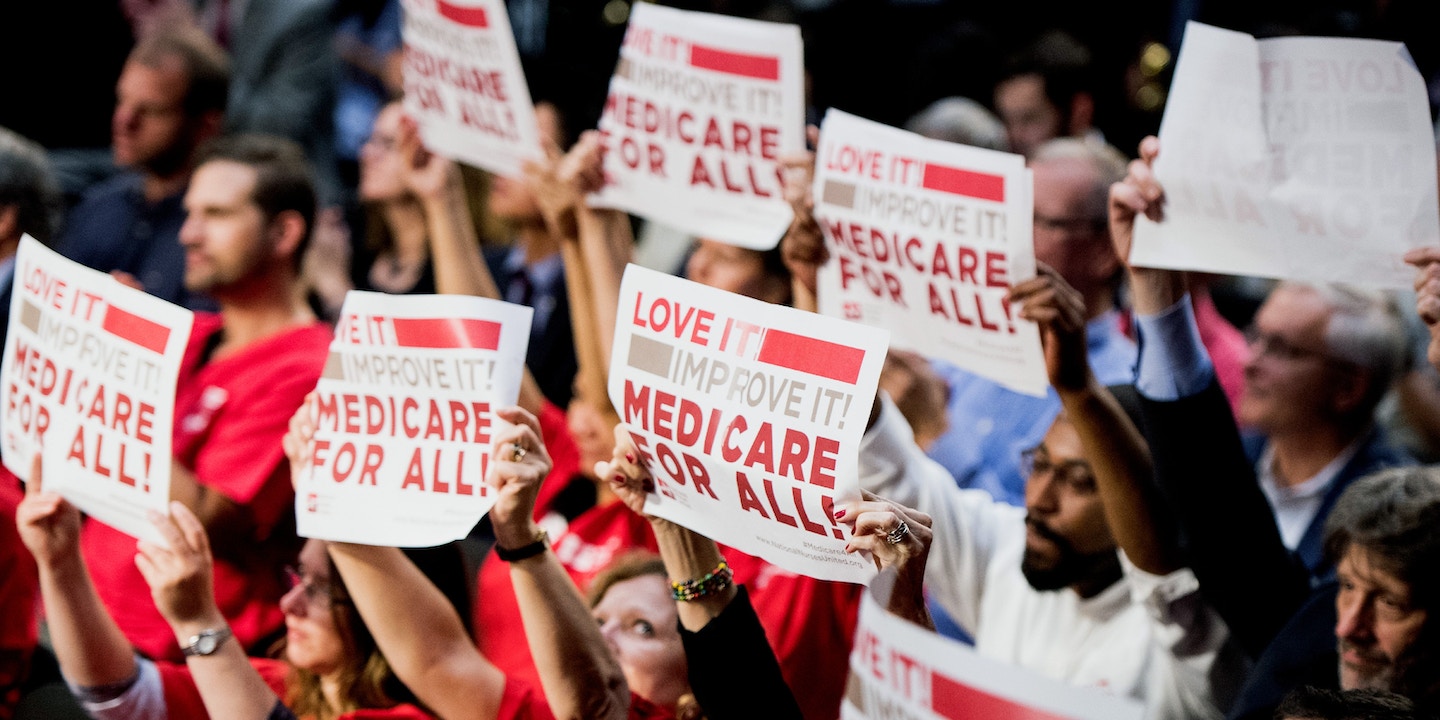 A new study from the Mercatus Center at George Mason University is making headlines for projecting that Independent Vermont Sen. Bernie Sanders’s “Medicare for All” bill is estimated to cost $32.6 trillion — a number that’s entirely in line with 2016 projections, and is literally old news. But what the Associated Press headline fails to announce is a much more sanguine update: The report, by Senior Research Strategist Charles Blahous, found that under Sanders’s plan, overall health costs would go down, and wages would go up.

The study, which came out of the Koch-funded research center, was initially provided to the AP with a cost estimate that exceeded previous ones by an incredible $3 trillion — a massive error that was found and corrected by Sanders’s staff when approached by AP for comment.

But despite that correction, the report actually yields a wealth of good news for advocates of Sanders’s plan — a remarkable conclusion, given that Blahous is a former Bush administration economist working at a prominent conservative think tank.

Blahous’s paper, titled “The Costs of a National Single-Payer Healthcare System,” estimates total national health expenditures. Even though his cost-saving estimates are more conservative than others, he acknowledges that Sanders’s “Medicare for All” plan would yield a $482 billion reduction in health care spending, and over $1.5 trillion in administrative savings, for a total of $2 trillion less in overall health care expenditures between 2022 and 2031, compared to current spending.

In order to arrive at this number, Blahous looked at how “Medicare for All” could lower administrative costs and provide savings in areas like drug spending. He concluded that by empowering the secretary of Health and Human Services to negotiate for lower drug prices, Sanders’s plan would add “$846 billion in additional savings over the 2022-2031” period. These savings, and others, are offset by certain other costs, like those which come from higher “utilization,” or the increased amount health care services used once everyone is insured.

Blahous’s report also acknowledges some substantial benefits to eliminating employer-sponsored insurance. He writes that these changes “should increase worker wage net of employer-provided health benefits,” while also “relieving individuals, families, and employers of the substantial health expenditures they would experience under current law.” The report even admits that the Sanders bill would serve as a boon to states, freeing them from most Medicaid obligations.

But despite the explicit benefits acknowledged by the Blahous study, health policy experts and single-payer advocates David U. Himmelstein and Steffie Woolhandler, who reviewed the Mercatus study, argue that Blahous actually significantly undercounts savings that could result from “Medicare for All.”

“The Mercatus Center’s estimate of the cost of implementing Sen. Bernie Sanders’ Medicare for All Act (M4A) projects outlandish increases in the utilization of medical care, ignores vast savings under single-payer reform, and fails to even mention the extensive and well-documented evidence on single-payer systems in other nations – which all spend far less per person on health care than we do,” Himmelstein and Woolhandler explain.

In a written analysis shared with The Intercept, Himmelstein and Woolhandler write that Blahous’s report undercounts administrative savings by more than $8.3 trillion over 10 years. Taking those savings into account would lower Blahous’s estimate from $32.6 trillion to $24.3 trillion.

Additionally, the policy experts believe that Blahous underestimates savings from drug prices; for example, ignoring the success the U.S. Veterans Administration, the Canadian government, and certain European governments have had in negotiating for lower drug prices. If the United States paid European prices, they conclude, another $1.7 trillion would be trimmed from Blahous’s total cost estimate, bringing it down to $22.6 trillion over 10 years.

Himmelstein and Woolhandler also claim that Blahous grossly overestimates how much extra care would be utilized as a result of expanding insurance coverage. Using Blahous’s projections, they note that he is essentially arguing that once every American is covered, there will be 100 million additional doctor visits and several million more hospitalizations each year. But Himmelstein and Woolhandler say that’s wildly off the mark. From their written analysis:

[T]here just aren’t enough doctors and hospital beds to deliver that much care. Doctors are already working 53 hours per week, and experience from past reforms tells us that they won’t increase their hours, nor will they see many more patients per hour.

Instead of a huge surge in utilization, more realistic projections would assume that doctors and hospitals would reduce the amount of unnecessary care to those who are currently not getting what they need. That’s what happened in Canada. Doctors and hospitals can adjust care to meet increasing demand, as happens every year during flu season.

Moreover, no surge materialized when Medicare was implemented and millions of previously uninsured seniors got coverage. Between 1964 (before Medicare) and 1966 (the year when Medicare was fully functioning) there was absolutely no increase in the total number of doctor visit in the U.S.; Americans averaged 4.3 visits per person in 1964 and 4.3 visits per person in 1966. Instead, the number of visits by poor seniors did go up, but the number of visits by healthy and wealthy patients went down slightly. The same thing happened in hospitals. There were no waiting lists, just a reduction in the utilization of unneeded elective care by wealthier patients, and the delivery of more care to sick people who needed it.

Blahous explained the $3 trillion error in an email to The Intercept.

As you might imagine, any draft study like this is shown to many people along the way (at least 20 in this case) and goes through multiple rounds of re-estimation, editing and redrafting.  Estimates in prior drafts were revised in both directions (higher and lower) in subsequent drafts on the way to final publication. One of the more recent drafts before final publication was shown to the Sanders office,” he said. “That draft contained an estimate of long-term care costs reproduced from another study, which was cited because this study had no long-term care model to draw upon.  That previously-published study predated the introduction of the Sanders bill, the language of which the Sanders office asserted was not intended to increase federal financing of long-term care service utilization.  In reality there probably would be some increase in long-term care utilization under M4A because its broader coverage expansion would enable more people to make use of long-term care benefits already authorized under current law through Medicaid.  But rather than attempt to estimate that, I concluded the right thing to do was to reflect the language’s intended effect as represented by the primary sponsor, as was done throughout the study with the other provisions of M4A.  I was very pleased to receive and incorporate their input.

Even using Blahous’s numbers — which may be off by roughly $15 trillion according to Himmelstein and Woolhandler’s estimates  — the conclusion is plain: “Medicare for All” would cover more people, increase the quality of coverage, and cost less than is currently being spent on health care. “Blahous admits that covering the uninsured and upgrading coverage for most others could be achieved at virtually no additional cost through a single payer reform,” Himmelstein and Woolhandler conclude.”Altogether, the increase in federal health spending is dramatic and certainly significant, but the change in projected national health expenditures really isn’t,” he told The Intercept. Especially given the source of the report, that’s news.

Top photo: Audience members wave signs as Sen. Bernie Sanders speaks at his event to introduce the Medicare for All Act of 2017 on Sept. 13, 2017.