Every year, close to 2 million people visit Rio de Janeiro’s Sugar Loaf Mountain, making it the city’s second-most frequented tourist site after Christ the Redeemer. Since 1912, families have traveled from all over the world, and from within Brazil, to ride the storied cable cars to the mountain’s peaks and enjoy the breathtaking panoramic views of one of the planet’s greatest and most beautiful cities.

But now, beyond majestic vistas, the throngs of visitors to Sugar Loaf see something else, strategically placed in one of the site’s most prominent spaces: a photograph of two men kissing. And in the three months that the photo has occupied prime real estate at Sugar Loaf, it has generated a steady stream of complaints and anger. 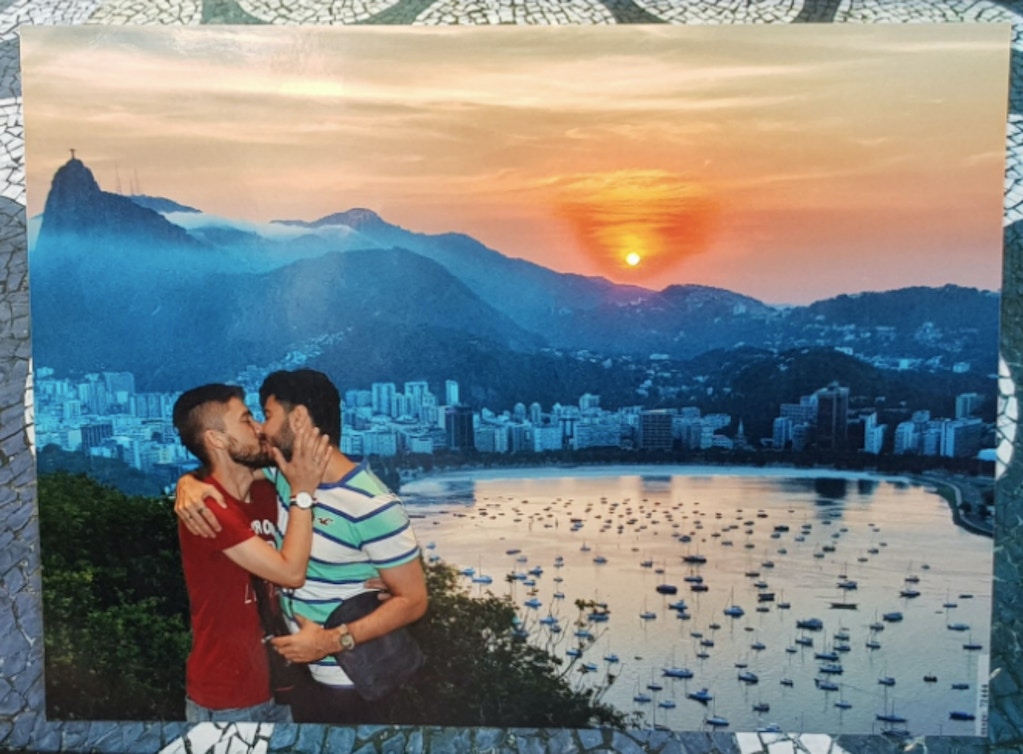 Upon entering the waiting area for the Sugar Loaf cable cars, groups of visitors have their photos taken in front of a green screen. They are told that they can have the pictures printed out, with their chosen background, at a counter situated on top of the mountain.

That counter displays several samples of photos, with each of the available backgrounds. Those sample photos are posted in a row, on the wall in front of the booth where employees print out and sell the photographs. At the very top of that row, occupying the most central spot, is the image of the two Brazilian men kissing romantically in front of an iconic shot of Rio de Janeiro, with Christ the Redeemer looming in the background.

The photo was placed there, with quite deliberate intent, by Pedro Lotti (pictured below), the 29-year-old manager of the company that manages the photo operation, Fotográfica. When describing the sometimes vitriolic complaints he receives on a daily basis, he made clear that he has no intention of removing the photo. “I did it specifically because roughly 70 percent of our employees here are gay, and they experience serious problems here because of this,” he said. Lotti himself is not gay, but said he viewed the use of the photo as an important opportunity to make the venue safe for LGBT people.

“It actually took a while to be able to have a photo of a gay couples kissing because most are afraid to do it,” Lotti told The Intercept. “Always, at the entrance, I noticed that same-sex couples were cautious or scared to touch, hold hands, or kiss for their photos” — the way that straight couples naturally do — “and they would walk to the photo area, and then walk away, and return various times, obviously afraid of how people would react.”

Lotti said that seeing how fearful gay couples were to do what comes naturally to heterosexual couples — show affection for a vacation photo — made him determined to create an environment where LGBT couples could feel safe to show affection. “Whenever I saw a couple I thought might be gay, I asked, ‘Are you a couple?’ If they said yes, I told them, ‘If you want to hold hands or kiss for the photo, you should.'”

When the couple in the photo — two Brazilian men in a long-term relationship, visiting from Minas Gerais, a state just north of Rio de Janeiro — took their photo, Lotti printed it out and immediately asked for authorization to display it at the counter. The couple consented, and Lotti purposely chose the most conspicuous spot for the photo, where it is virtually impossible not to see it. Ever since, Lotti and his employees have navigated a constant stream of anger and grievance. “Unfortunately,” said Lotti, “the large majority of people who react to the photo do so quite poorly. We get complaints every day. They typically complain, specifically, that the photo is in the line of vision for children, and are angry that their kids specifically have seen the photo.” The parents usually object “that it’s not necessary to put a photo like this in a place where kids will see it.”

Lotti noted that the store’s display of photos almost always includes heterosexual couples who are kissing. But, he said, “nobody ever complained about those.”

Lotti said that, occasionally, the photo has generated inspiring interactions between parents and children. Sometimes, he said, children ask their parents about the photo with curiosity, and some parents respond, “That’s love.” Lotti said that “this does not have happen often. It’s not common. But it makes me happy when I see parents speaking openly and with tranquility about it, because the kids never have a problem at first.”

“The problem,” Lotti said, “is always with the parents, not the kids. Depending on how the parents respond, that determines whether the kids react positively or negatively.” It is parents, he said, who impart to their children this kind of “crazy prejudice.”

The prominent, purposeful display of the photo at one of the country’s most iconic tourist sites is particularly bold given how controversial LGBT equality has become in Brazil, the nation with the world’s largest Catholic population and a growing right-wing evangelical political movement.

With the actual front-runner for Brazil’s 2018 presidential election, former President Luiz Inácio Lula da Silva, imprisoned and almost certain to be banned from running, the current poll leader is far-right, proto-fascist Congressman Jair Bolsonaro. He is notorious for his toxic attacks on LGBT people, which have recently morphed into a clearly deliberate strategy by his movement to argue that LGBT people are actively attempting to convert Brazilian children to be gay in order to molest them. 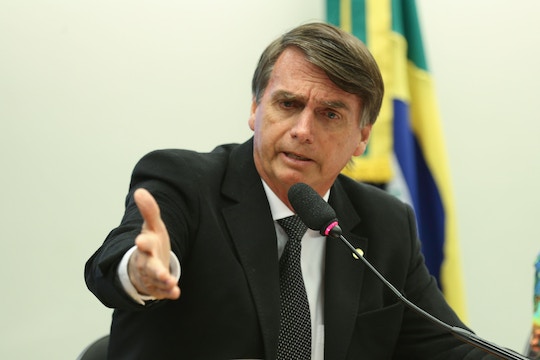 Just last week, as The Intercept reported, one of Jair Bolsonaro’s three right-wing sons who hold elected office, Rio de Janeiro Councilman Carlos Bolsonaro, got caught posting fake posters on his social media accounts claiming that LGBT groups were adding “P” to their name in order to advocate for pedophilia. Right-wing groups succeeded last year in forcing the cancelation of an art exhibit that they claimed promoted pedophilia.

The Bolsonaros and their movement speak with such great frequency about pedophilia that it leaves one mystified as to the source of this obsession. Last week, Jair Bolsonaro was asked in an interview with the Rio newspaper O Globo about a 2011 Playboy interview in which he said he would rather hear that his son died in a car accident than that he was gay. When Jair Bolsonarso claimed that his answer was merely designed “to combat a question about teaching sex to little kids starting at the age of 6,” the following exchange occurred:

Do you believe it’s possible to teach children to be gay?

Not to teach, but to stimulate. If you show a film in school of two little boys kissing, then little Johnny during the break could give a peck to little Pedro. Boys, until a certain phase, imitate.

In this climate, Lotti’s bold choice to prominently display a photograph of two men kissing, at a mainstream tourist attraction frequented by millions of families and children, is no small gesture. But he seems not only content with his choice and unafraid to speak publicly, but proud of it: “This kind of love, between two men or two women, has existed for thousands of years, long before the kind of ignorant bigotry that we now hear on a regular basis, provoked by a simple picture of love.”