That a debate is even happening is a mark of how serious the race has become. Delaware Sen. Tom Carper has agreed to debate his Democratic challenger, Kerri Evelyn Harris, as the primary contest has heated up.

With most primaries across the country now over, attention is shifting to the remaining few challenges playing out, with a marquee race in Delaware that pits Carper, who has been in statewide elected office since the 1970s, against Harris, who was born three years after Carper first took office.

It will be Carper’s first primary debate in a generation, and comes as reinforcements are arriving from Michigan and elsewhere around the country. Claire Sandberg, who was deputy campaign manager for Abdul El-Sayed’s gubernatorial campaign and was a key digital player on Bernie Sanders’s campaign, is teaming up with Harris, as is Winnie Wong, founder of People for Bernie.

Sandberg and Wong will join Alexandra Rojas and a team of organizers who last worked to elect Alexandria Ocasio-Cortez. El-Sayed rose from single digits in the polls but still finished 22 points behind Gretchen Whitmer on Tuesday.

Harris recently challenged Carper to a debate during a radio interview. “If you believe you’re the best candidate, then you’re not going to be afraid to step in front of people and prove to them why,” she said. Harris, herself an Air Force veteran, has also criticized fellow veteran Carper for his vote in support of the Iraq War and his aggressive foreign policy views.

Harris has been highlighting not just Carper’s longtime record of militarism but also her own anti-war agenda, one she believes she can vest with added credibility due to her status as a veteran. Earlier this week, Harris denounced policies designed to “line the pockets of military contractors.”

The US is on track to spend $1.5 trillion on the F-35 jet. That money should be spent uplifting people, not on lining the pockets of military contractors.

The August 27 debate will be hosted by the News Journal, which has been in talks with Carper over the last month about the logistics and timing of the debate, an editor there told The Intercept, adding that Carper never indicated he would not debate.

A Delaware civic group, the Greater Hockessin Area Development Association, is hosting a debate on August 20, which will include Harris and the GOP candidates for Senate, but not, as of now, Carper. 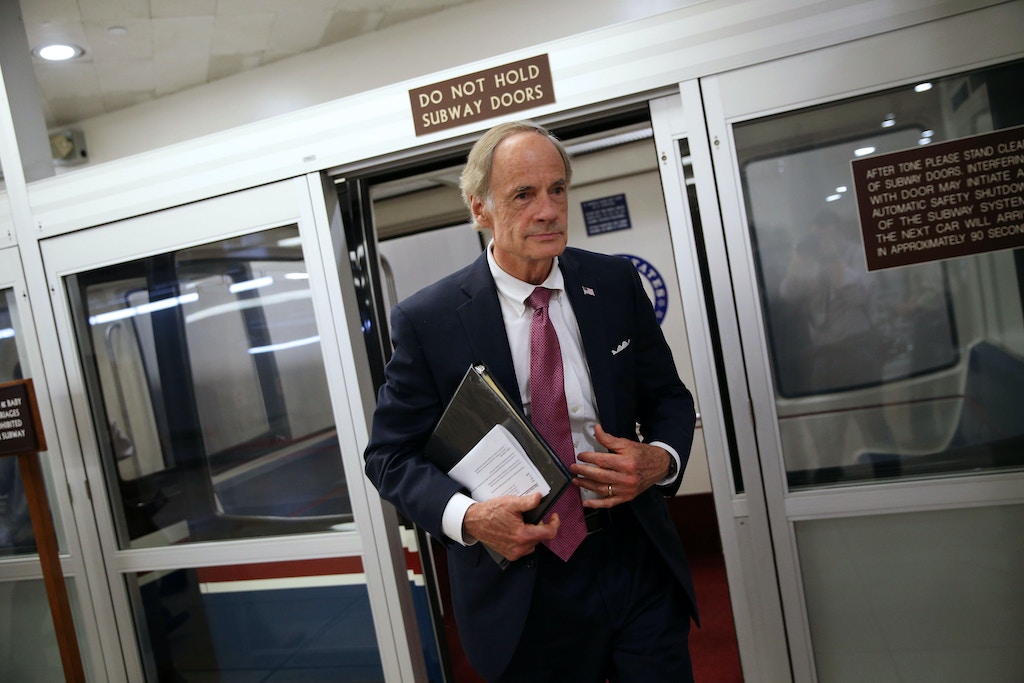 Sen. Tom Carper speaks to reporters as he arrives for the weekly Senate Democrats’ policy luncheon on Capitol Hill on July 24, 2018, in Washington, D.C.

Carper is broadly popular in Delaware and the most well-known politician in the state after Joe Biden, but in a year when disaffected voters are looking for a new approach, he’s facing his first real primary of the contemporary era.

Sandberg will be working on the independent side of the campaign, and said she chose to come to Delaware after Michigan because of the sharp contrast between the two candidates. “Democrats like Tom Carper — who have deregulated Wall Street, led us into perpetual war, carried water for the fossil fuel industry, and time and time again voted for right-wing judges and appointees — should no longer have a place in the Democratic Party,” she said. “It’s time for new leadership from people like Kerri.”

Welcome to the family, @KerriHarrisDE!

Delaware, stand up: you’ve got a revolution on your hands! ??? https://t.co/xa0NaN6Che

Delaware is a blue state, but one dominated by financial and other corporate interests, and Carper’s politics have long hued toward industry. But he has also been conservative over the years on social issues as well. He took a tough-on-crime approach in the 1990s as governor and boasted about his role in expanding mass incarceration. “We have provided for very harsh sentences of those who commit crimes with weapons, violent crimes, in the state of Delaware. Eighty-nine percent of them are serving their maximum term, which is the highest of any state in the country. We’re also undertaking the largest prison construction in the history of the state,” he said in one debate.

In 2006, he voted for a controversial Senate measure to make English the official language of the United States.

In the wake of President Barack Obama’s election, Carper teamed with then-Sens. Evan Bayh, D-Ind., and Blanche Lincoln, D-Ark., to found a Senate version of the conservative Blue Dog Coalition, with the aim of moderating Obama’s agenda and pushing for a focus on deficit reduction, while the economy at the time was losing more than half a million jobs every month.

In late March 2009, the trio took to the Washington Post op-ed page.

Beyond the chessboard of the Senate, nearly half of the U.S. electorate calls itself moderate, and more than half of the rest identify themselves as conservative. That means Democrats could capture every liberal vote and half of the moderates and still lose at the polls. Many independents voted for President Obama and the contours of his change agenda, but they will not rubber-stamp it. They are wary of ideological solutions and are overwhelmingly pragmatic. Many of them live in our states and in the states of the other senators who have joined our group.

For the activists getting involved in the race, Carper’s alliance with the state’s corporate interests makes him an appealing target in an effort to show that a blue state can elected a people-powered candidate instead. “We have a chance to build a movement and elect a woman, a mother, a veteran, and a community organizer who will fight like hell to defeat the big money and the special interest groups which have captured both Tom Carper and our democracy,” Wong said when asked why she was relocating to Delaware. “Senator Carper has governed for 3 term as a US Sen. and his voting record speaks for itself. He supported the Keystone XL pipeline and worked actively with Republicans to roll back Dodd Frank. At a time of crushing inequality, the hardworking families of Delaware deserve a public servant who works for them and not Wall Street.”

The election will be held on Thursday, September 6.