Jahana Hayes won the Democratic primary in Connecticut’s 5th District despite Mary Glassman’s endorsements from the U.S. Chamber of Commerce and MoveOn. A bizarre coalition of groups came together to rally behind Mary Glassman against Jahana Hayes in Tuesday’s Democratic primary election in Connecticut, where racial politics bubbled just beneath the surface.

Glassman is a longtime local politician who twice ran unsuccessfully for lieutenant governor. Connecticut is a blue state dominated by corporations, and Glassman this week won the rare endorsement of the U.S. Chamber of Commerce, a Republican-aligned voice for big business. The chamber almost never endorses Democrats and rarely intervenes in a Democratic primary.

Joining the chamber was MoveOn and the local chapter of Our Revolution, the group formed in the wake of Sen. Bernie Sanders’s 2016 campaign for president. The three disparate groups have never lined up together on a campaign, but they did so on the opposite side of Hayes, a black woman who grew up in a local housing project and captured national attention when she was named 2016 “Teacher of the Year.”

None of the endorsements mattered, as Hayes romped to a 62-38 victory over Glassman, who also had the official endorsement of the Connecticut Democratic Party.

MoveOn bases its endorsements on a vote by local members. To endorse, at least two-thirds of the members must support a particular candidate in a two-way race — so the endorsement suggested that there was significant support in the 5th District for Glassman.

“We made a decision to hold a member endorsement vote in this race, and our members voted to endorse Glassman,” Rahna Epting, managing director of MoveOn’s Election Program, told The Intercept. “Many of our members who casted votes also expressed substantial enthusiasm for Hayes. We always honor the results of official endorsement votes of the MoveOn membership.”

Hayes stood outside of the Torrington Armory holding up a sign promoting her candidacy Tuesday afternoon. She waved to passersby and greeted voters as they walked to the brick building’s front door.

Hayes said she doesn’t trust the polls because polling only asks “likely voters” — not the kind of voter that Hayes believed her campaign relied on for a win. “I’m relying on first-time voters, voters who have been disengaged,” said Hayes. “I’m trying to start a conversation.”

Hayes told The Intercept that she’s seen “tremendous support” from people across the district, some of whom have never voted in a primary before. “People have a choice,” said Hayes. “I’m hoping people will see we have similar values and vision.”

The campaign is relying on grassroots organizing, said Hayes, whose campaign started on May 2. “It’s day 102 of my political life,” Hayes said.

The endorsement by the central Connecticut branch of Our Revolution was highly unusual, as Our Revolution claims to back progressive candidates who — unlike Glassman — proudly embrace the policy platform Sanders ran on. (Sanders won more votes in Connecticut’s 5th District in the 2016 primary, even though Hillary Clinton won the state overall in the election.) The group, however, has a rather anarchic approach to the establishment and activity of local chapters. On the local’s page, it says that it supports candidates who advocate for “Medicare for All,” the only specific policy cited.

Diane May, a spokesperson for the national Our Revolution, said, “Our local groups are free to endorse the candidates they feel best represent their progressive values. As this was a local endorsement, you’ll have to speak with them as to why they endorsed the way they did.”

Bobby Berriault, of the local Our Revolution chapter, told The Intercept that “Hayes and Glassman are very similar: Both support universal health care, both support a $15-an-hour minimum wage.” Glassman’s campaign shared her backing of those progressive positions directly with the 100-member strong chapter, Berriault said.

Glassman’s support for “Medicare for All” does not appear anywhere on her campaign website, which instead talks about defending the Affordable Care Act and working to lower prescription drug costs. This lines up with talking points suggested by the Democratic Congressional Campaign Committee, which has pushed candidates not to embrace single-payer health care. The minimum wage plank is similarly missing from Glassman’s website; the campaign didn’t immediately respond to a request for comment. Meanwhile, Hayes told The Intercept that she supports single-payer health care; a $15 minimum wage; and free college, another policy that Our Revolution typically champions. (Her campaign website lists only her support for single payer.)

Berriault said that he himself supported Glassman, but he did not vote on the endorsement motion. (Glassman recently donated $100 to a Berriault GoFundMe to cover surgery expenses.) He said that the MoveOn endorsement confirmed Glassman’s progressive bona fides, adding that Our Revolution members were concerned that much of Hayes’s fundraising had come from outside the district. His support, however, was not unwavering. “I am a little troubled that the Chamber of Commerce endorsed her,”  he said. 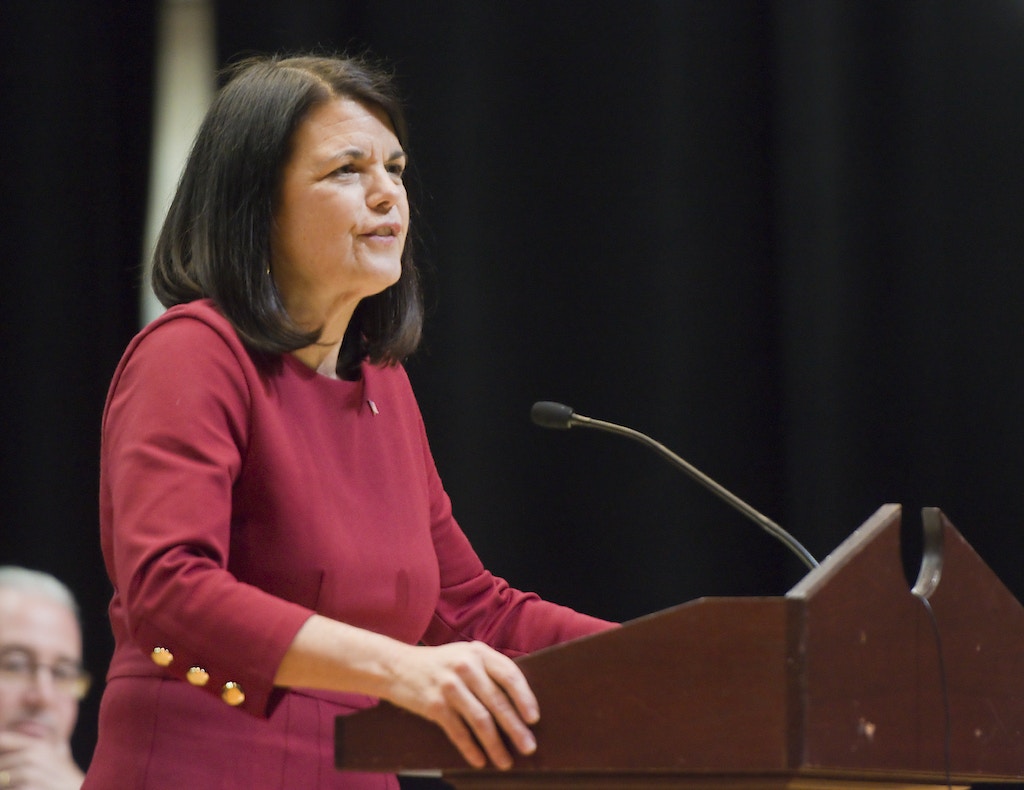 Candidate Mary Glassman addresses delegates during the Democratic convention for the 5th District on May 14, 2018, in Waterbury, Conn.

Glassman jumped into the race in April when Rep. Elizabeth Esty stepped down amid reports that she allowed her chief of staff to stay on months after learning he’d been accused of harassing a female staffer. Glassman quickly raised more than $100,000 and hoped to cruise to an easy victory.

But her sailing was less smooth than she expected. Less than two weeks before the May 14 endorsement convention, Hayes — encouraged by Sen. Chris Murphy — jumped into the race. At the nominating convention for Connecticut’s 5th District, as The Intercept previously reported, it was Hayes who emerged as the initial winner. But convention chair Tom McDonough kept the vote-switching period open long enough for enough delegates to switch and swing it narrowly back toward Glassman.

Vote-switching itself is not uncommon, but the prolonged process was unusual. Chris D’Orso, a convention delegate who serves on the Board of Aldermen for Waterbury and backed Hayes, told The Intercept at the time that he’d never seen anything like it in his more than 20 years of deep involvement in local Connecticut politics.

The Connecticut NAACP called for a special hearing into potential vote tampering to ensure that civil rights were not violated; the Democratic State Central Committee later found that two votes had been improperly recorded in Glassman’s favor, but the finding did not impact the actual endorsement.

Hayes didn’t drop out though, hoping to become the first black candidate for the House, Senate, or governor to earn the nomination of her state party. In Connecticut, any candidate who wins at least 15 percent of the delegates at the endorsing convention earns a spot on the primary ballot. As a result of the endorsement, though, Glassman’s name is featured at the top of the ballot and marked with a special designation to signal that she’s the party-backed candidate.

If Hayes wins the primary, she could be the only black leader serving in the U.S. House or Senate from all of New England. (Ayanna Pressley, the first black woman to serve on Boston’s City Council, is also gunning for the Democratic nomination in Massachusetts 7th Congressional District next month.)

One month after the convention, Sen. Kamala Harris, D-Calif., widely assumed to be running for president in 2020, endorsed Hayes. Local teacher unions and the Connecticut Working Families Party did the same. Hayes’s fundraising also surpassed expectations. By the end of July, Hayes had raised $461,000, compared to Glassman’s $457,000, according to Federal Election Commission filings. Glassman’s campaign points out that she raised 85 percent of the funds from voters in the district, while more than half of Hayes’s funds in her latest filing came from out of state.

In July, Murphy introduced Hayes to a slew of influential donors and veteran political staffers. While Murphy has not issued a formal endorsement, he told the local news site CT Post that he encouraged Hayes to run in part “because we don’t have a single nonwhite member of the New England congressional delegation,” and “we are really missing something.” He described Hayes as “a wonderful contrast” to Glassman.

Glassman is running on experience, touting her eight terms of public service as Simsbury’s first selectman, a mayor-like position for a wealthy enclave outside Hartford. Hayes is running as a fresh voice, outside the political establishment.

The MoveOn and Chamber endorsements aren’t likely to change the facts on the ground, said Hayes campaign Finance Manager Meghan Scanlon. She pointed out that the fact the endorsements came so close to the election means that they won’t likely sway too many voters. “I think voters want change,” said Scanlon.

“At first it was just me and Jahanna,” said Scanlon. “We built this out of nothing.”

Scanlon, who has a long resume in Connecticut Democratic politics — she’s worked for current senator and former Rep. Chris Murphy and for Elizabeth Esty, the incumbent representative who isn’t running for re-election this year after a scandal involving a top aide, and is married to State Representative Sean Scanlon — said that Hayes’s campaign style and success has Scanlon rethinking some of her previous assumptions about politics.

“I have a new understanding and appreciation for what this can look like,” Scanlon said of Democratic politics.

Update: August 14, 2018
This story was updated with election results, as well as on-the-ground reporting by Eoin Higgins.