“Throw people in jail, fine them, do whatever you need to do. But make sure you get the biophysical outcome. From what I’ve seen, market mechanisms don’t always deliver that.” 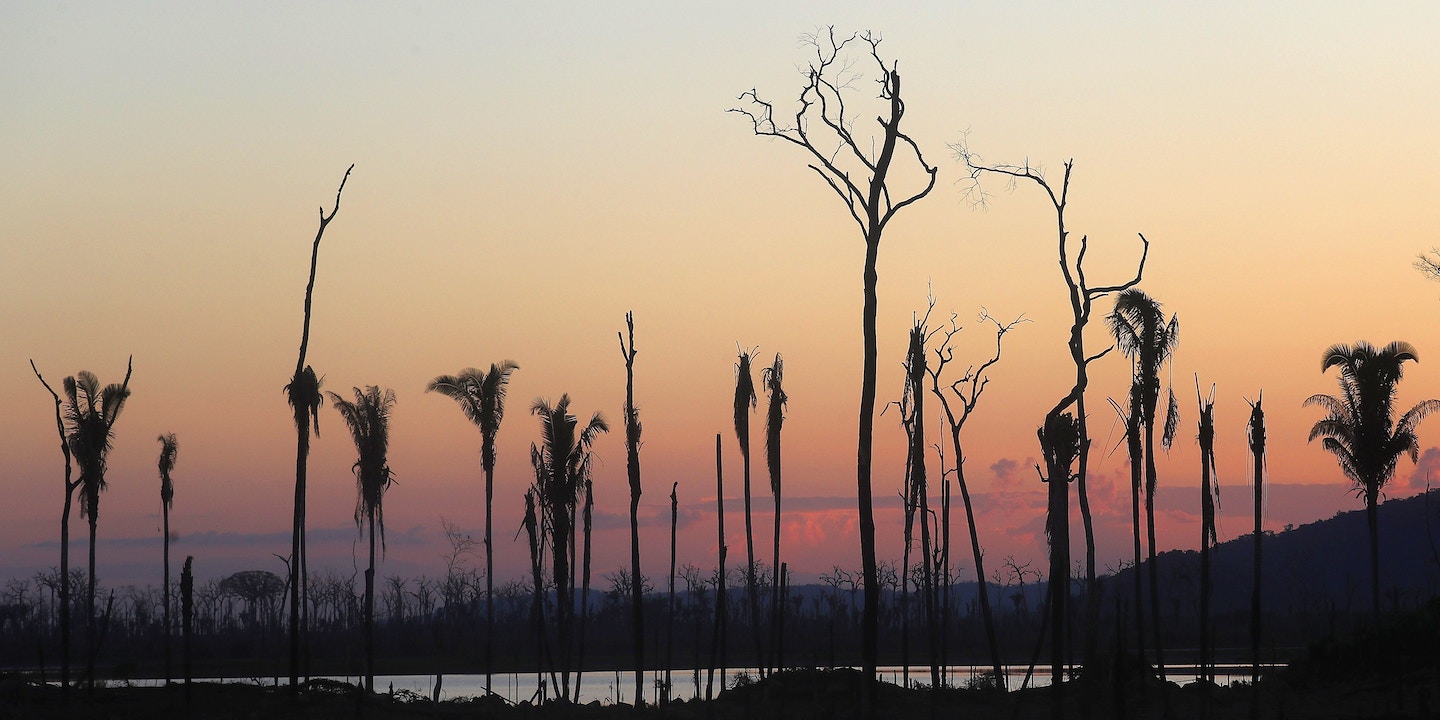 By shifting to a “wartime footing” to drive a rapid shift toward renewable energy and electrification, humanity can still avoid the apocalyptic future laid out in the much-discussed “hothouse earth” paper, a lead author of the paper told The Intercept. One of the biggest barriers to averting catastrophe, he said, has more to do with economics than science.

When journal papers about climate change make headlines, the news usually isn’t good. Last week was no exception, when the so-called hothouse earth paper, in which a team of interdisciplinary Earth systems scientists warned that the problem of climate change may be even worse than we thought, made its news cycle orbit. (The actual title of the paper, a commentary published in the Proceedings of the Natural Academy of Sciences, is “Trajectories of the Earth System in the Anthropocene.”)

Coverage of the paper tended to focus on one of its more alarming claims, albeit one that isn’t new to climate researchers: that a series of interlocking dynamics on Earth — from melting sea ice to deforestation — can feed upon one another to accelerate warming and climate impacts once we pass a certain threshold of warming, even after humans have stopped pouring greenhouse gases into the atmosphere. The best chance we have for staying below that catastrophic threshold is to cap warming at around 2 degrees Celsius, the target enshrined in the Paris Agreement.

That’s all correct and plenty daunting. Yet embedded within the paper is a finding that’s just as stunning: that none of this is inevitable, and one of the main barriers between us and a stable planet — one that isn’t actively hostile to human civilization over the long term — is our economic system.

Asked what could be done to prevent a hothouse earth scenario, co-author Will Steffen told The Intercept that the “obvious thing we have to do is to get greenhouse gas emissions down as fast as we can. That means that has to be the primary target of policy and economics. You have got to get away from the so-called neoliberal economics.” Instead, he suggests something “more like wartime footing” to roll out renewable energy and dramatically reimagine sectors like transportation and agriculture “at very fast rates.”

That “wartime footing” Steffen describes is a novel concept in 2018, but hasn’t been throughout American history when the nation has faced other existential threats. In the lead-up to World War II, the government played a heavy hand in industry, essentially shifting the U.S. to a centrally planned economy, rather than leaving things like prices and procurement of key resources up to market forces. By the end of World War II, about a quarter of all manufacturing in the United States had been nationalized. And while governments around the world continue to intervene heavily in the private sector — including in the U.S. — those interventions tend now to be on behalf of corporations, be it through subsidies to fossil fuel companies or zoning laws that favor luxury real estate developers.

Contra much of the apocalyptic coverage around “Trajectories,” runaway climate change of the kind described in Steffen and his co-authors’ paper is very likely preventable. The ways to prevent it just happen to go against the economic logic that has dominated the world economy for the last half-decade, to scale back regulations and give major industries free reign.

Climate modeler Glen Peters saw a gap between the relatively measured perspective provided in the paper and the doomsday tone of press coverage, where headlines — like “No Existing Policies Will Be Enough to Prevent a Future Hothouse Earth,” per Futurism, and “Earth at Risk of ‘Hothouse’ Climate Tipping Point Even If Emissions Are Reduced” — make the end of days seem like a foregone conclusion.

“I don’t think many scientists think that if we met our Paris commitments, we would end up in a hothouse,” Peters said. “I think at least the media coverage went too far. The final paragraph in the paper says these are all speculative and that to sure it up, we will have to do lots of research on these questions. … The media takeaway is that we’re heading to a hellhole.”

The end isn’t quite so nigh. On top of rapidly phasing-out greenhouse gas emissions, “Trajectories” notes that humans have to create their own negative feedback mechanisms so the Earth can maintain a stable level of carbon in the atmosphere. That means expanding and repairing the Earth’s natural “carbon sinks,” like big forests that can effectively suck emissions out of the atmosphere and store them naturally.

“We need to immediately stop deforestation of the Amazon rainforest and other tropical forests, and start reforesting them. That means a U-turn in terms of how we operate the world’s economic systems,” Steffen told me via Skype. “The only way you’re going to change that is if you actually change value systems, perhaps even changing the way political systems operate and so on. The social scientists in our group have said this really is a fundamental change in human societies we need to have if we’re going to solve this problem.”

Mind, none of this is terribly unique for scientific papers on climate change. Peters notes that upon first read, he skimmed over the section in the paper describing what humans can do to prevent climate change. “I’ve read that a billion times. I don’t need to read it a billion and one,” he joked. That reining in emissions will require massive transformations in the Earth’s productive systems isn’t controversial within the scientific community, which has long argued that world economies need to decarbonize by midcentury at the absolute latest — and that’s a assuming a best-case scenario in which so-called negative emissions technologies can by that point be deployed at scale.

The paper itself put it in fairly direct terms. “The present dominant socioeconomic system,” the authors wrote, “is based on high-carbon economic growth and exploitative resource use. Attempts to modify this system have met with some success locally but little success globally in reducing greenhouse gas emissions or building more effective stewardship of the biosphere. Incremental linear changes to the present socioeconomic system are not enough to stabilize the Earth system; these include changes in behavior, technology and innovation, governance, and values.”

For high-emitting countries like the U.S., Steffen says the first step to avoiding planetary apocalypse is basically self-evident: “absolutely no new fossil fuel developments. None. That means no new coal mines, no new oil wells, no new gas fields, no new unconventional gas fracking. Nothing new. Second, you need to have a rapid phase-out plan for existing fossil fuels,” starting with coal, he says.

Many of the solutions to climate change, Steffen and his co-authors argue, already exist and are starting to work; the appendix to their paper lists out several such measures. “It’s not that the solutions aren’t there. It’s that we don’t have the economic and policy setting right to really ramp those up,” he said. The main constraints on action are “our value systems, politics, and legal systems,” Steffen told me, adding that taking climate change seriously also means taking “a completely different view of economics, going away from viewing the natural world as resources to viewing it as an essential piece of our life support system that needs to be maintained and enhanced.

“I think you simply have to go right back to the fundamental science of who we are, the planet we evolved into, how that planet operates and what’s happening to it,” Steffen maintains, “and that will tell you immediately that so-called neoliberal economics is radically wrong in terms of how it views the rest of the world.”

From Europe’s emissions trading system to recurring talk of pricing carbon in the United States, climate policy making conversations around the world have tended to focus on market-based instruments for reducing emissions, premised on the idea that setting the right price will encourage polluters and consumers to change their behavior — so-called sin taxes.

Asked what he thought the balance should be between those sorts of market-tweaking measures and regulations, Steffen cautioned that he wasn’t an expert in the field. “Naively from the outside as a non-expert,” he said, “I would say regulation every time: throw people in jail, fine them, do whatever you need to do. But make sure you get the biophysical outcome. From what I’ve seen, market mechanisms don’t always deliver that.”

Top photo: Dead trees stand in a recently deforested section of the Amazon on June 25, 2017, near Abuna, Rondonia state, Brazil.