Ilhan Omar and Keith Ellison win, while Lori Swanson is beaten by both Tim Walz and Erin Murphy. A record number of voters cast ballots in the primary in the 5th District, which includes all of Minneapolis. Out of some 130,000 ballots cast, Omar went home with more than 62,000 to Kelliher’s 39,000, with just a few precincts left to count. By contrast, in 2016, about 44,000 voters participated in the district’s Democratic primary, and 362,000 voted in the general election.

The election was widely viewed as a three-way contest between Omar, Kelliher, and state Sen. Patricia Torres Ray, who came in third with 13 percent. Voter turnout was especially critical in the Minneapolis district; the seat was expected to be uncontested until June 5, when its current occupant, Ellison, jumped into the race for attorney general.

Omar ran a strong ground game, employing the strategies she used in her 2016 state legislative primary that led to a 37 percent increase in voter turnout as compared to the 2014 primary. She was backed in recent weeks by Alexandria Ocasio-Cortez and Rashida Tlaib, insurgent Democratic nominees in New York and Michigan House districts, respectively. Over the weekend, Tlaib, fresh off her primary victory in Michigan’s 13th District, traveled to Minnesota to get out the vote for Omar. Tlaib and Omar are the nominees in solidly Democratic districts, and they are expected to be the first Muslim women in Congress.

The 5th District is the bluest in Minnesota and one of the most progressive in America, and the candidates’ platforms all included the stable of progressive policy priorities like “Medicare for All,” tuition-free college, and abolishing U.S. Immigration and Customs Enforcement.

The race between Omar and Kelliher, Omar told The Intercept in an interview last month, rested on what it means to be a true progressive. “There is a definition of being open to ideas, and being welcoming and inclusive, which is how I would define a liberal point of view. And I think what it means to be progressive is really to think about pushing for a new kind of innovative way of looking at things,” Omar said. “When we are having a conversation between someone like Margaret and myself, we have to look and see who has a history of actually pushing for progressive ideas.”

Omar had the backing of the bulk of the progressive and grassroots groups that weighed in on the race, including MoveOn; Justice Democrats; the statewide and Twin Cities chapters of Our Revolution, the group that was formed from the remnants of the 2016 Bernie Sanders campaign; and CPD Action, an arm of the Center for Popular Democracy.

Because the candidates generally agreed on the issues, they campaigned on their identities and experiences. For Kelliher, it was her 12 years as a state lawmaker, the fact that she was the second woman elected House speaker in the state, and her record of standing up to the state’s Republican governor. Torres Ray, a Colombian immigrant, has been a state senator for the last 12 years, and was the first Latina elected to the Minnesota Senate. Before entering elected office, she was a community organizer and worked in state government, catering to underserved communities. That type of experience is exactly what Congress needs, she argued.

Omar, who made her entree into politics less than two years ago, brought a different type of experience to the race. She emphasized her story as a refugee who made history as the first Somali-American legislator in the United States while arguing that her holistic experience, including as a longtime community organizer and as a millennial with student debt, equips her for the job.

Kelliher appeared to have gone into election day with a significant fundraising advantage. She had raised about $348,000 to Omar’s $246,000 as of July 25, the most recent date for which Federal Election Commission data is available.

Omar will face Republican Jennifer Zielinski in November, an election she is expected to handily win.

Ellison did not endorse any of the candidates running to replace him, but Omar told The Intercept last month that she was inspired by his legacy. “We’re running for a seat that has been held by a true progressive,” she said, “that has been held by someone who really shaped what it means to be a progressive in Washington, and someone who’s affirmed how you can use your seat in Congress to not only push for a progressive agenda, but to make sure you’re continually advancing an opportunity for people to be included in our democracy.” 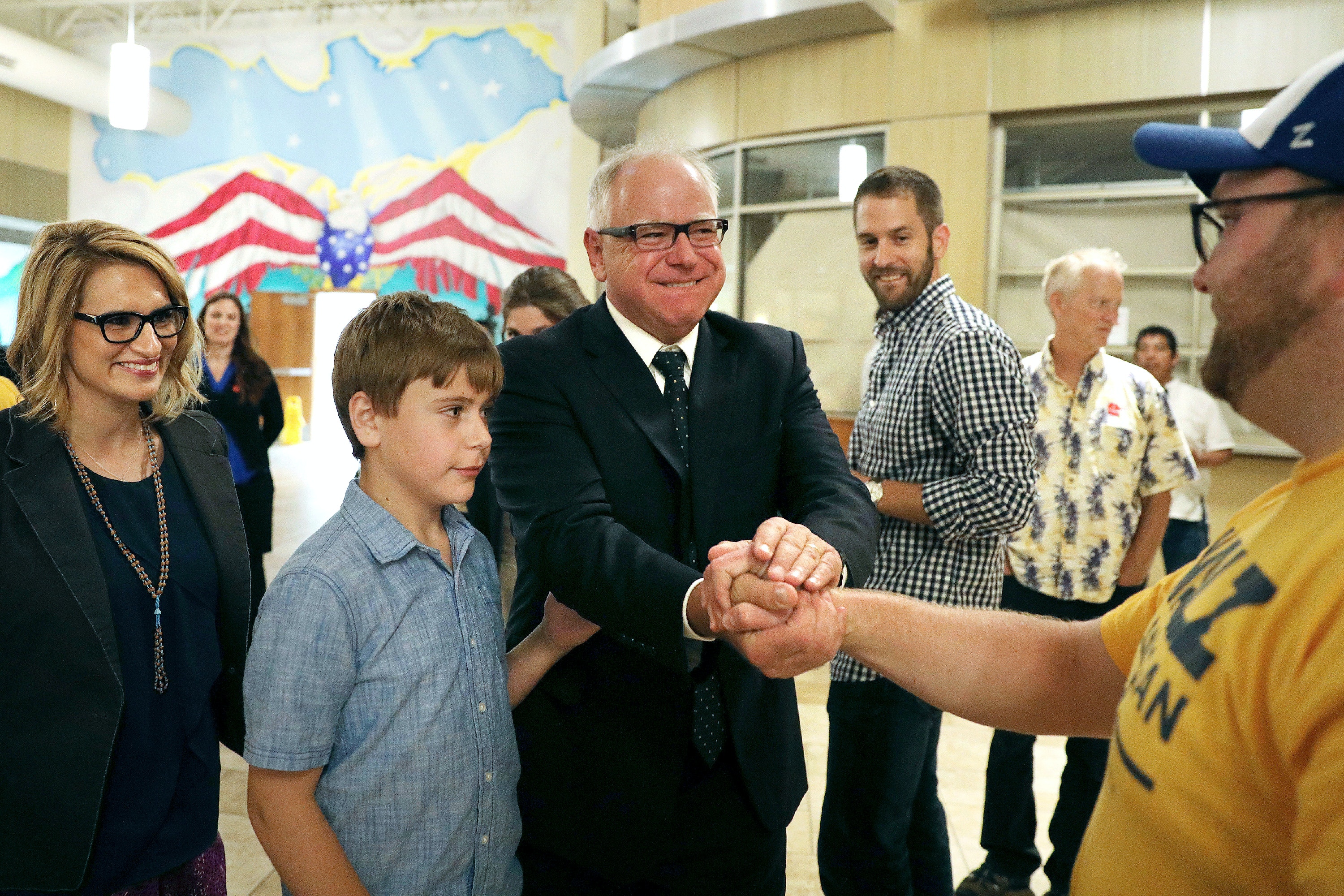 Walz emerged victorious despite not winning the party’s endorsement at its June nominating convention. He took home 43 percent of the vote, followed by 33 percent for Erin Murphy, the Democratic Farmer Labor-endorsed candidate and most progressive in the race, who was backed by EMILY’s List. Swanson finished third with just 23 percent.

A poll released just on Monday showed Swanson with 29 percent of the vote, Walz with 28 percent, and Murphy with 19, suggesting that Swanson collapsed badly in the final week of the campaign, with undecideds breaking for Walz and Murphy, and Swanson even losing a chunk of her support.

Swanson, a moderate Democrat who has been preparing for a gubernatorial run for the last decade, jumped into the race at the last minute and led in the polls throughout the summer. A three-term attorney general with broad name recognition across the state, she cruised to re-election in 2014 with 53 percent of the vote.

But Swanson’s political fortunes started to change in late July, when news broke that her running mate, Rep. Rick Nolan, had rehired a former legislative director to staff his 2016 re-election campaign shortly after female staffers had reported him for routine sexual harassment.

Swanson plummeted further following reports, first published by The Intercept, that the attorney general used her office for campaign work throughout her 11 years in office. Current and former staffers said that employees known to be significant Swanson political supporters also went on to receive raises and promotions in the workplace. The Intercept spoke with D’Andre Norman, a key Swanson deputy for eight years, who explained in detail how he pressured employees to campaign for Swanson and aided his boss in crushing a union effort and rewarding those deemed most loyal.

The Swanson campaign responded to our report by sending around Norman’s criminal record to the local Minnesota press corps, prompting Norman to seek a temporary restraining order against the attorney general. An initial hearing is scheduled for Wednesday morning, before Ramsey County Chief Judge John Guthmann.

Walz will go on to challenge Republican Jeff Johnson in the general election; Johnson is a Trump supporter who leans further right than his top primary challenger, Tim Pawlenty. Pawlenty served as Minnesota’s governor from 2003 to 2011, and went on to serve as CEO and president of a banking industry trade group.

Walz spent the most money in the gubernatorial election, according to campaign finance reports. By the end of July Walz had spent close to $2 million, compared to Murphy’s $850,000 and Swanson’s $475,000.

Walz served six congressional terms in a historically Republican district, in part by maintaining moderate positions and focusing on issues like agriculture. One of his biggest vulnerabilities throughout the gubernatorial campaign was his “A” rating from the National Rifle Association from his past congressional campaigns. But Walz says his position on guns has evolved.

“I believe my children should be able to come home to school safe,” Walz told Minnesota Public Radio in July. “The NRA of my childhood is not the NRA of today.” He now supports more comprehensive background checks and banning assault-style weapons, among other reforms. He argues that his experience as a legislator from a rural district actually makes him more equipped to pass state-level gun control.

Murphy, considered the furthest left of the three candidates, is a registered nurse and former majority leader of the Minnesota House of Representatives. She ran on single-payer health care, a $15 minimum wage, and free college tuition. She also boasts of an “F” rating from the NRA.

Walz’s campaign ran on a $15 minimum wage and reducing health care costs, largely through a public option, but not an explicit single-payer agenda. His campaign website said, “Tim believes a single payer type system is on Minnesota’s horizon but that immediate action needs to be taken to control costs and improve care.”