New York state Senate candidate Julia Salazar is one of the few political candidates to consult the sex work community and prioritize their concerns. 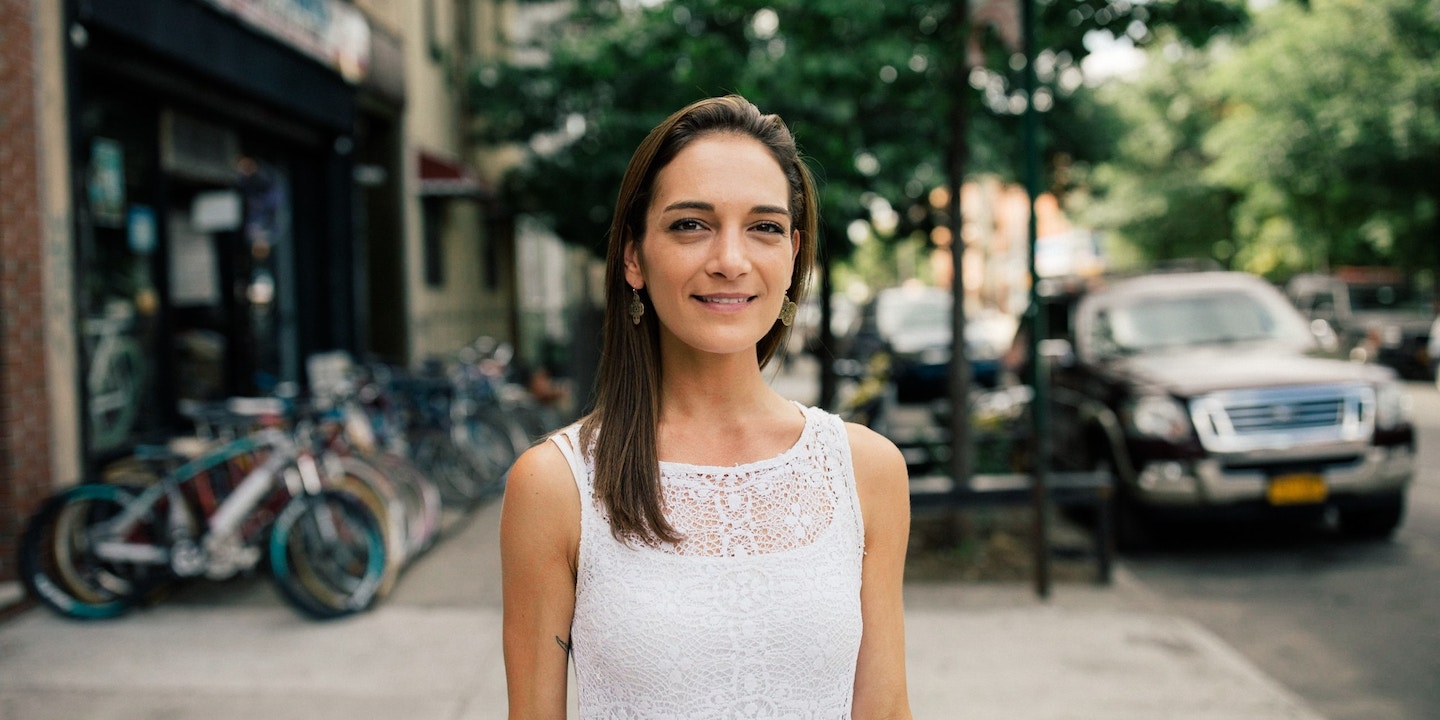 Julia Salazar, a candidate for the New York state Senate, is doing what few Democratic politicians have done before: taking sex workers’ rights seriously. The 27-year-old democratic socialist, who is shaping her policy by consulting the sex work community, is one of the first candidates to definitively support those workers, including by proposing concrete steps toward decriminalization.

Sex work — which refers to the willing exchange of money or goods for sexual labor, including escorts, prostitutes, pornography actors, and phone sex operators — intersects with labor, gender, immigration, race, LGBTQ, and criminal justice issues. It is often conflated with sex trafficking, which involves forcing someone into sex work through violence or other means, and as a result, nearly all mainstream political movements have failed to address the concerns of the sex work community. Salazar, who is challenging eight-term incumbent Democratic state Sen. Martin Dilan, has centered her campaign around affordable housing and other policy positions championed by the insurgent left. But her plan to defend sex workers’ rights has energized a community that has been understandably skeptical of electoral politics.

One hundred sex workers and their allies have signed up to attend a canvassing event in the Brooklyn district for Salazar’s campaign on Sunday, ahead of the September 13 primary. This follows an event earlier this month, when upward of 120 sex workers and activists hosted a pizza party for Salazar to discuss labor rights and decriminalization.

Also, this room in Bushwick is absolutely packed to capacity, 120-150 people on a Wednesday night, to talk labor rights & criminalization of sex work. Outside a national conference, the biggest local activist meeting of sex workers & allies I’ve ever seen in US, let alone in NYC. pic.twitter.com/lcNK25CiIG

“Sex workers are workers and they deserve to be treated with dignity, including protections and decent working conditions, rather than the abuse and criminalization that they currently face,” Salazar told The Intercept in a statement. “I’m dedicated to defending workers’ rights, reforming our criminal justice system and ending exploitation, and we know that criminalization puts everyone in sex work at risk rather than protecting them.”

Salazar’s platform outlines steps toward decriminalization that include an end to raids on massage parlors; working with district attorneys to stop charging sex workers with crimes; and creating a network of optional social services to address workers’ needs, such as housing, child care, syringe access, and job training. Her platform would also make it easier for sex workers with criminal records to access housing and jobs, along with repealing the exemption for sex workers under New York’s rape shield law.

Lola Balcon, a community organizer for sex workers’ rights who has been working with the campaign, said Salazar is “so far ahead of everybody else” when it comes to understanding the scope of the sex workers’ rights movement, and why it concerns society’s most vulnerable. “This is an issue that should be talked about in every single race. And so to be the fourth or fifth person talking about it is incredible,” she added.

There are 14 prostitution-related offenses in New York penal code alone, and they disproportionately impact women of color. Salazar is echoing the demands of sex work advocates, who have prioritized the repeal of a 1970s-era statute that prohibits “loitering for the purposes of prostitution.” Nearly 70 percent of defendants facing prostitution charges in the Brooklyn trafficking courts are black women, while 94 percent of those arrested on loitering charges are black women, according to a 2014 report by the Red Umbrella Project.

Prostitution arrests at massage parlors, where workers are predominantly immigrants, are another point of focus for activists. U.S. Immigration and Customs Enforcement has been cracking down on massage parlors around the country, and some of the prostitution arrests have resulted in deportation. Between 2012 and 2016, massage parlor raid arrests in New York increased 2,700 percent, going from 38 people up to 649. “It’s pretty much an ICE machine,” Balcon said, adding that the agency has also used prostitution diversion courts to track down immigrant women it hopes to deport.

Sex workers are emerging as a force in electoral politics, outside the unprecedented energy for Salazar’s campaign, because of the growing political threat against their industry. In April, Congress nearly unanimously passed legislation collectively known as SESTA-FOSTA, which purports to curb online sex trafficking — a cause few people would vote against — by holding online platforms legally liable for any content found to “knowingly assist, facilitate, or support sex trafficking.” (FOSTA is short for the Fight Online Sex Trafficking Act, and SESTA for the Stop Enabling Sex Traffickers Act.) In effect, the legislation has hurt sex workers’ ability to work online, threatening their safety and livelihood.

Sex workers use online platforms to access clients and share safety tips, and as a whisper network to warn each other of individuals who have been deemed unsafe. If a sex worker encounters a violent or suspicious client, sharing information with others in the community could prevent violence and potentially save lives.

The bill’s broad implications have had a chilling effect on internet speech, as many online platforms changed their terms of service or banned sexualized content altogether following its passage. Because platforms are not dealing with the nuances of sexual language, as computers can’t distinguish between community discussion and a post promoting trafficking with complete accuracy, the political advocacy of sex workers and trafficking victims is stifled as well. Under SESTA-FOSTA, a number of platforms have already shut down, including Craigslist personals and Backpage.com. The impact of the legislation hasn’t yet been empirically measured, but anecdotally, sex workers say more community members are facing violence, rape, and arrest.

Sens. Ron Wyden, D-Ore., and Rand Paul, R-Ky., were the only members of the upper chamber to vote against SESTA, and they did so over internet freedom concerns, not because of the bill’s potential to harm sex workers. Sens. Bernie Sanders, I-Vt., and Elizabeth Warren, D-Mass., despite having devoted their political careers to addressing economic inequality, voted in favor of the legislation even though it further criminalizes a form of labor.

Sex work is another arena in which insurgent candidates are starting to buck mainstream political movements. Suraj Patel, a candidate who lost his congressional primary challenge to New York Democratic Rep. Carolyn Maloney in June, was one of the few critics of SESTA-FOSTA. He also held the first known town hall in U.S. history to include sex workers and discuss their issues, attracting a crowd of hundreds. Amy Vilela, a progressive candidate who ran in Nevada’s 4th Congressional District, similarly advocated for decriminalization to empower those working in the sex industry before losing her primary election. Alexandria Ocasio-Cortez, the Democratic nominee in New York’s 14th Congressional District, was also one of the early critics of SESTA-FOSTA. Many sex workers realize that they need more allies in the halls of power, though; in June, dozens of sex workers from across the country converged in Capitol Hill for a first-ever lobbying day.

The sex workers’ rights movement was re-energized by the passage of SESTA-FOSTA, and the increased prevalence of criminal justice reform as a critical election issue has made it easier for politicians to talk about. But Balcon also attributes the shift to the rise of the Democratic Socialists of America. DSA, so far, has been the only major organization on the left to stand with sex workers and absorb the labor struggle into their own. Salazar, herself a DSA member, has said she “unequivocally and unapologetically” considers sex work to be real work.

Sex work is often conflated with sex trafficking, a false comparison that stems from a refusal to recognize sex work as a labor issue, a longstanding divide among feminists. Anti-sex work feminists often argue “no little girl grows up wanting to be a prostitute.” But does any little girl grow up wanting to work at an Amazon warehouse, either?

“Literally no one cares more about stopping and preventing trafficking than sex workers because sex workers are most vulnerable to it,” Balcon said. “So if you’re not going to listen to the people who are the experts on preventing that in their own communities, then you don’t actually care about trafficking.”

Salazar, for her part, recognizes the need to combat sex trafficking and exploitation in the sex industry, and she wants to do so by tackling the issues that impact all workers. Her campaign platform proposes targeting root causes of trafficking, “through economic opportunity, criminal justice, immigration reform, and the provision of housing and social services.”

Update: August 17, 2018, 9:23 a.m.
This piece has been updated to include a statement from Julia Salazar that was received after publication.