Two suspected Russian spies were charged on Wednesday with smuggling a Novichok nerve agent into Britain in March and using it to poison a former spy. 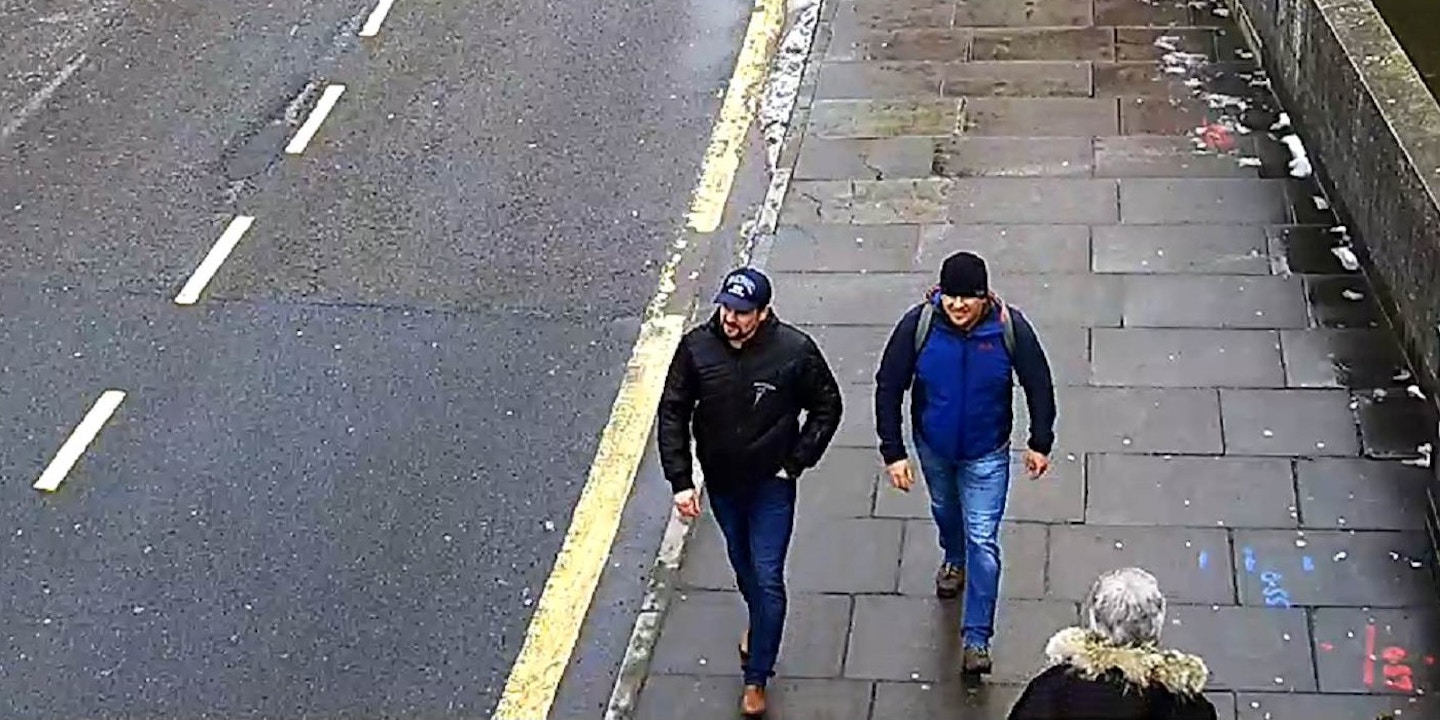 Two Russian men charged by British prosecutors with using a Novichok nerve agent to poison a former spy are members of Russia’s military intelligence service, known as the GRU, Prime Minister Theresa May told the House of Commons on Wednesday.

“The GRU is a highly disciplined organization, with a well-established chain of command, so this was not a rogue operation,” the prime minister said. “It was, almost certainly, also approved outside the GRU, at a senior level of the Russian state.”

May’s statement came just over an hour after Scotland Yard’s chief of counterterrorism policing, Assistant Commissioner Neil Basu, announced the charges and revealed that the movements of the two men before and after the attack were captured on six different surveillance cameras in the English city of Salisbury, where the former Russian spy Sergei Skripal was poisoned, along with his daughter Yulia, with a type of military-grade nerve agent developed by the Soviet Union.

If you know these men or saw them in the UK between Friday 2 March and Sunday 4 March, contact police in confidence.

Basu released the surveillance images, along with a detailed timeline and photographs of the two men and of a counterfeit perfume bottle used to smuggle the nerve agent into the country on an Aeroflot flight from Moscow to London.

Arriving from Russia at Gatwick ... pic.twitter.com/05cwNSRZev

The suspects were caught on CCTV on Wilton Road at 11.58 on the Sunday “moments before the attack” pic.twitter.com/Zou2EZ07pH

#Salisbury Attack - Images released of the 'perfume' box and the bottle with an adapted nozzle.

Did you see this box between Sunday 4 March and Weds 27 June?

The police also revealed that traces of the nerve agent were discovered in an East London hotel room where the two men, who used the names Alexander Petrov and Ruslan Boshirov, stayed during their two day trip from Moscow.

Basu added that the same Novichok nerve agent used in the attack on the Skripals, who both survived, was found in the counterfeit perfume bottle discovered in Salisbury in June by an English couple, one of whom died as a result.

The apparent target of the attack, Sergei Skripal, had served in the GRU for about 15 years but betrayed the agency by selling secrets to MI6, Britain’s foreign intelligence service.

The Russian foreign ministry spokeswoman, Maria Zakharova, dismissed the detailed accusation, saying that “the names and photographs published in the media mean nothing to us.” Later, she told the state news agency Interfax that the ministry demanded that the British supply Russia with the fingerprints of the two men accused of the attempted murder of the Skripals.

Earlier on Wednesday, as word leaked out that the British prime minister might be making a statement related to the nerve agent attack, the Russian foreign ministry responded by posting a satirical video on its official Twitter and Facebook accounts, which compared May’s awkward dancing on a recent trip to Africa with Zakharova’s own ability on the dancefloor.