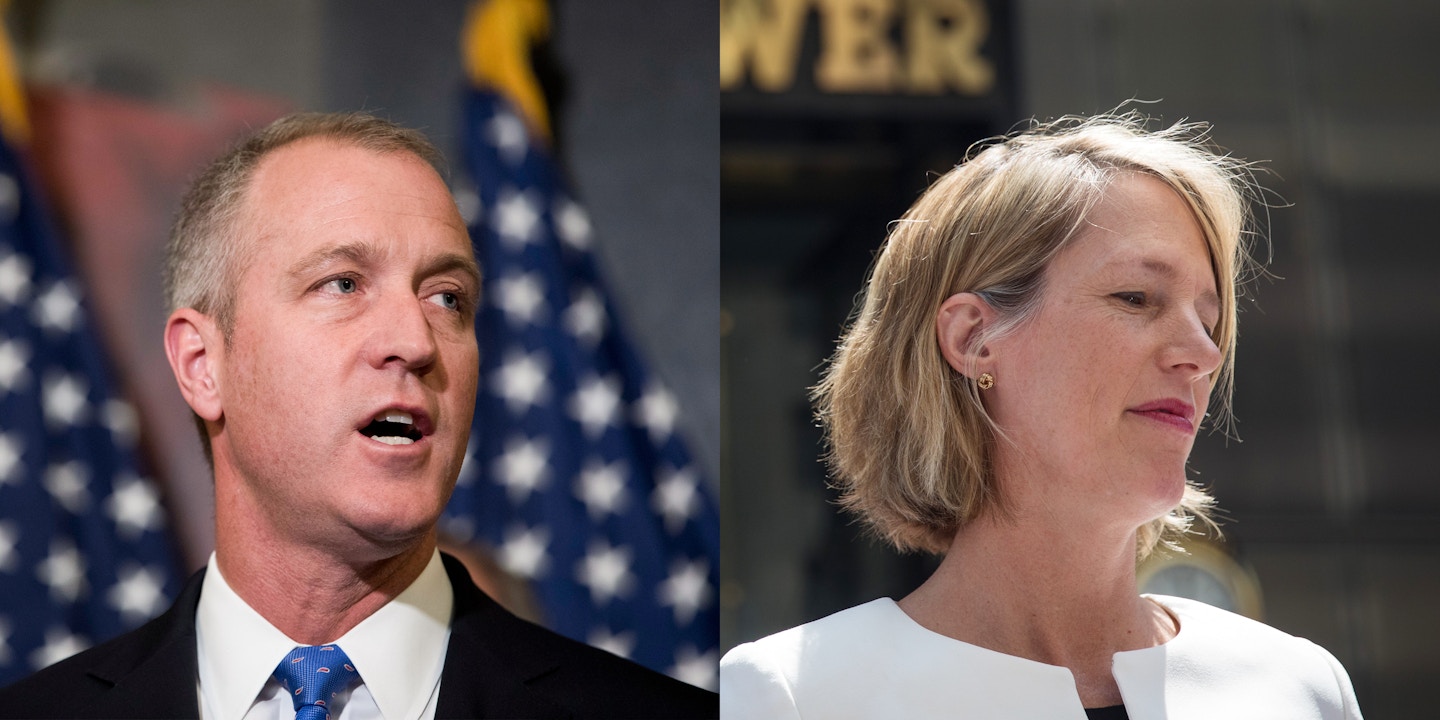 The exchange, during which Maloney was booed by the audience, was the latest of several instances where Maloney has claimed that African-American small bankers in his district were the primary beneficiaries of the deregulatory policies he favored. In reality, large mega-banks benefited far more from both of the votes Teachout cited.

Those same large mega-banks and other financial industry players are supporting Maloney’s campaign for attorney general, a position which has sometimes been called “the sheriff of Wall Street” because of its jurisdiction. Earlier this week, the Financial Times broke down how a significant chunk of Maloney’s $1.8 million in fundraising comes from Wall Street lawyers and real estate developers.

“I fought really hard for a section you may not know about, Section 716 of Dodd-Frank, which ensured that the people of this country would not have to bail out big banks for risky behavior,” Teachout said in the debate. “My opponent, Sean Patrick Maloney, was one of a handful of Democrats who voted with Republicans to get rid of that.”

Maloney didn’t really contest this in his response. It is entirely true that Maloney was one of 57 House Democrats who voted for a government funding bill that included the repeal of Section 716 of Dodd-Frank. This section would have forced the riskiest derivatives trading to be conducted outside of big banks and in separately capitalized entities. It was an artifact of a progressive primary challenge to former Arkansas Sen. Blanche Lincoln, who wrote the tough derivatives language in an effort to prove her liberal bona fides.

Financial institutions pushed for years to kill Section 716; Citigroup actually wrote the rider that Maloney supported. Taxpayers are now on the hook for these risky derivatives if losses mount, because companies like Citigroup and JPMorgan Chase benefit from deposit insurance.

Teachout continued: “My opponent is also a Democrat who voted with a handful of Republicans in the recent Bank Lobbyist Act, which, among other things, decreased reporting requirements so we can’t know about discrimination in lending.” Maloney was indignant: “What a pile of nonsense that is.”

It’s not nonsense. Maloney was one of 33 Democrats who voted with nearly all Republicans on what Teachout and other critics of the bill call the Bank Lobbyist Act, a moniker popularized by Sen. Elizabeth Warren, D-Mass., who called out her colleagues by name for supporting it.

It is also known as the “Crapo bill” for its author, Sen. Mike Crapo, R-Idaho, the chair of the Banking Committee. Among many other things, it decreased enhanced reporting requirements under Dodd-Frank and the Home Mortgage Disclosure Act for the precise kinds of data that would flag lending discrimination. Section 104 of the law exempts banks and credit unions from reporting that data if they make fewer than 500 loans per year. This includes 85 percent of all banks and credit unions. The controversial move generated significant public discussion in the runup to the vote.

But the removal of HMDA requirements puts borrowers of color at risk of being overcharged or denied access to housing. According to census statistics, there are far more black homeowners and renters than there are black bankers.

While small banks are aided by some of the measures in the bill, the most critical section is a gift to so-called stadium banks, which are big enough to name a stadium after their company. The legislation raised the threshold for enhanced regulatory standards from banks with $50 billion in assets to those with $250 billion. That provides regulatory relief to 25 of the 38 largest banks in the country.

Banks even bigger than that are also boosted by the bill in the form of less frequent and less burdensome stress tests, and looser capital and liquidity requirements. That the lawmakers who drafted the law have busily lobbied the Federal Reserve to maximize support for big banks suggest that they, not small banks, are the real target of the bill. Maloney sided with these lawmakers, and the bank lobby, in voting for the legislation.

The primary for the attorney general race is set for September 13. It began as a race between Letitia “Tish” James, the New York City public advocate, and Teachout, but James has faded as her connection to Gov. Andrew Cuomo, who endorsed her and held a fundraiser on her behalf, has become a major liability in the corruption-prone state. The race now appears to have shifted to one between Maloney and Teachout.

Maloney is funding his campaign from his congressional account, a move which some legal scholars say is illegal. The Teachout campaign has sued Maloney to stop the move.