People Might Be Getting the Swedish Elections All Wrong

In Sweden’s national election, many assume the far right is being bolstered by immigration. But what if the evidence shows that it’s the economy, stupid? Sweden’s voters went to the polls on Sunday to elect a national government, and all eyes are on the Sweden Democrats, a once minor, far-right party that netted around 18 percent of the vote. This comes after winning 12.9 percent in 2014 and puts them a bit behind the Moderates, the center-right party, but far behind both the center-left and center-right coalitions, each of which claimed roughly 40 percent.

Mattias Karlsson, the party’s leader in the legislature, was triumphant at a results party. “2018 is to conservatism what 1968 was to the left,” he reportedly said.

But the results were far less than the party, famous for its anti-immigrant rhetoric, had hoped for, with leaders boasting that perhaps 1 in 4 voters would choose them. That didn’t happen, and the relatively meager 5 percentage point boost calls into question the conventional wisdom that anti-immigrant politics are inevitably on the rise in Europe.

Many analysts have noted that the Sweden Democrats have used demagoguery about the large flow of refugees that have arrived in Sweden to attempt to increase their political support. The party has made three different complaints: that migration is increasing crime, that it is increasing economic pressures on the country, and that the largely Muslim immigrants are undermining the country’s secularism and national unity.

While there is no evidence that the refugees are responsible for a major increase in overall crime, there has been intense media focus on acts of violence by some immigrants, including attacks with hand grenades.

These attacks, along with complaints about economic pressures and culture, have helped shift Sweden’s wider political climate to the right. As one example, Sweden’s ruling Social Democrats, the country’s center-left party, has campaigned on reducing the number of refugees granted asylum in the country. Both the center-left and center-right parties moved to the right on immigration, under pressure from the Sweden Democrats.

But what if the rise of the Sweden Democrats has less to do with exposure to immigration, and more to do with rising inequality, driven by austerity and financials shocks?

In a paper released last month, five Swedish academics examined the factors driving the performance of the Sweden Democrats between their marginal status in 2002 to becoming Sweden’s third-largest party in 2014.

They looked not only at the voters who backed the Sweden Democrats, but also the politicians they elected.

Part of the Sweden Democrats’ appeal is their claim to be outsiders. The researchers found that more than 96 percent of the party’s politicians elected going back to 1982 have never been elected for another party.

Data the researchers collected on Sweden Democrat politicians elected to local offices also shows that they are considerably poorer than the politicians from other parties:

Notes: “The income percentiles are calculated by birth year and sex at birth. Data from year 1979 were used to compute the percentiles of annual earnings for the fathers. Fathers are only included if they are of adult age in year 1979 (e.g. 18 or older).”

But what about their voters? The researchers lumped them into two large categories: “insiders” with stable employment and “outsiders” with unstable or no employment. The former category is also broken down between “vulnerable insiders,” whose jobs are at higher risk of automation versus “secure insiders” who don’t face the same risk.

They then look at how two major economic shocks impacted their voting behavior.

The first shock started in 2006, when the Social Democrats lost power to a center-right coalition that proceeded to enact tax cuts and austerity measures. The second shock was the 2008 global financial crisis. 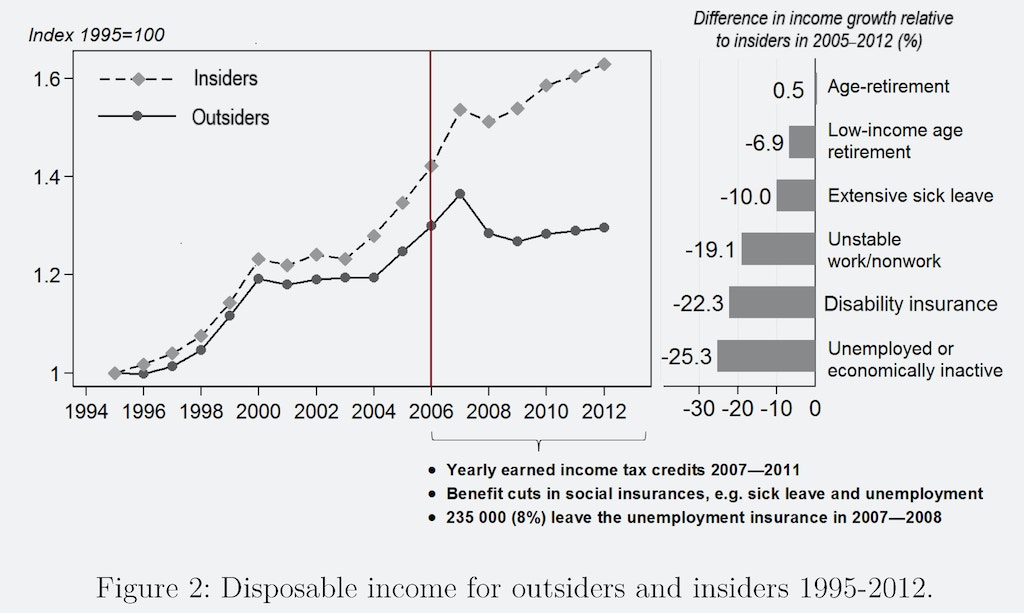 Notes: “Labor market categories are defined based on by the SELMA model Kindlund and Biterman 2002).”

The results of their regression analysis “strongly indicate that the Sweden Democrats gained the most votes in municipalities where outsiders faced the largest drop in incomes relative to insiders, and where there was a larger fraction of vulnerable insiders who risked losing their jobs in the financial-crisis recession. The associations are statistically precise and quantitatively non-trivial.” The trend is present in both municipal-level results for parliamentary elections and for municipal council elections. Notes: “Labor market categories are defined based on by the SELMA model Kindlund and Biterman (2002). Vulnerable insider status is defined as having an occupation with an RTI index above the median.”

Their regression analysis finds that “the municipality’s immigrant share is never significantly correlated with voting for the Sweden Democrats, once we include our measures tied to losing groups. Moreover, the association between these measures and Sweden Democrat vote shares are not sensitive to including immigration.”

They are careful to note that they are not entirely precluding the conclusion that immigration may contribute to the party’s growing electoral strength. “We could easily think of an indirect link from economic outcomes to attitudes on immigration, and/or the salience of immigration policy in voting decisions,” they write. “Perhaps most importantly, economic pressures may make people more receptive toward political messages that emphasize the fiscal costs of immigration and the latent redistribution from foreign to native-born by restricting it.”

In other words, it’s not that the Sweden Democrat voters despise immigrants, but when a party scapegoats immigrants, that messaging may be viewed as a signal that the party at least recognizes the underlying problem — economic stagnation. Shades of that phenomenon are evident in the United States. Richard Ojeda, a Democratic state senator in West Virginia, supported Donald Trump in 2016, reasoning that at least Trump talked about bringing jobs back to West Virginia, even if in the back of his mind he didn’t think he’d accomplish it. “At least he’s saying something. You know, nobody talks about West Virginia. Nobody talks about helping West Virginia,” he explained.

We asked Uppsala University’s Olle Folke, one of the researchers who conducted the study, about what its implications are. What political wisdom could competing parties take from the research shown here?

“It helps us understand the mobilization [of the party],” he said of the findings.

When it comes to advice he might give to other parties, he pointed to the Sweden Democrats’ success in recruiting outsider candidates, which sets them apart from other parties.

“I think an overall recommendation would be [to find] ways to incorporate people who are economically marginalized into politics,” he said.

The researchers’ work would be backed up by what exit polls are showing about who forms the composition of the Sweden Democrats’ votes. One pollster found that 19 percent of the support base is driven by individuals who backed the center-left Social Democrats in 2014 — the highest portion outside of already committed Sweden Democrat voters.

Some exit poll data provides an insight into the source of votes for the national populist Sweden Democrats... #val2018#SwedenElection pic.twitter.com/IhRnYlpJxS

The Social Democrats, meanwhile, are looking at their worst result in a century.

It is worth noting that the paper’s scope of research is through 2014, before Sweden committed to taking in as many as 190,000 new refugees. It is possible that the issue of immigration is more potent in recent years than it was during the initial rise of the party. But the reality that the party only grew incrementally over that period, even as the salience of its key issue grew exponentially, suggests that it is not as important to voters as the conventional wisdom would have us believe.

What the research does indicate is that the Sweden Democrats’ initial rise is much more closely linked to growing social inequality than it is attitudes about or an increase in immigration. Had Sweden’s center-right and center-left parties offered more in-depth solutions to social inequality, eschewed austerity and recruited candidates closer to the working class, they may have been able to avoid the initial rise in Sweden’s far right.

Sweden’s political climate is not identical to that of other Western countries, but it’s worth mentioning that other nations have also seen a shift in voter composition for major parties.

In both the United States and France, and to a lesser extent the United Kingdom, the composition of left and center-left parties has shifted from worker-oriented parties to parties oriented around highly educated voters, according to research published by economist Thomas Piketty this year:

New from @PikettyLeMonde: how the left in #US and #France (but not in #UK) have transformed from working class parties to representatives of the highly-educated, and how this contributes to #populism and the rise of income #inequality. 174 pages of joy: https://t.co/5CNNEX6FjC pic.twitter.com/TpMK1sYug8

Top photo: The party leader of the far-right Sweden Democrats, Jimmie Akesson, speaks at a campaign meeting in Malmo, Sweden, on Sept. 8, 2018.