Time to Kill the Zombie Argument: Another Study Shows Trump Won Because of Racial Anxieties — Not Economic Distress 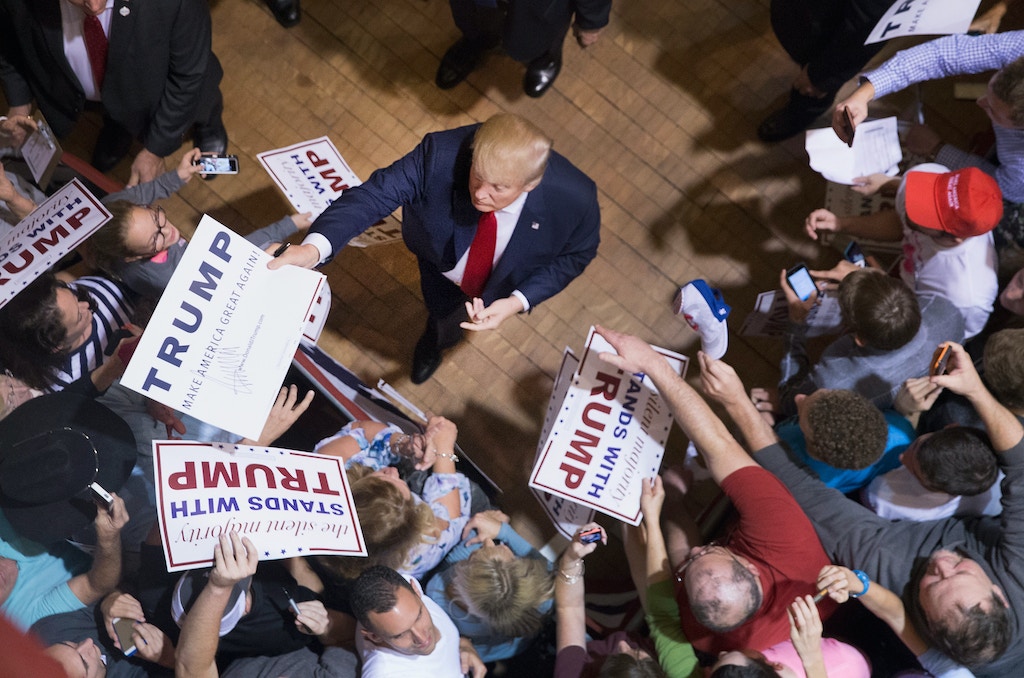 Then-candidate Donald Trump greets guests after speaking at a campaign rally at Burlington Memorial Auditorium on Oct. 21, 2015 in Burlington, Iowa.

Do you remember “economic anxiety”? The catch-all phrase relied on by politicians and pundits to try and explain the seemingly inexplicable: the election of Donald J. Trump in November 2016? A term deployed by left and right alike to try and account for the fact that white, working-class Americans voted for a Republican billionaire by an astonishing 2-to-1 margin?

The thesis is as follows: Working-class voters, especially in key “Rust Belt” swing states, rose up in opposition to the party in the White House to punish them for the outsourcing of their jobs and stagnation of their wages. These “left behind” voters threw their weight behind a populist “blue-collar billionaire” who railed against free trade and globalization.

Everyone from Fox News host Jesse Waters to socialist Sen. Bernie Sanders has pushed this whole “economic anxiety” schtick. But it’s a complete and utter myth. As I pointed out in April 2017, referencing both pre-election surveys and exit poll data, the election of Trump had much less to do with economic anxiety or distress and much more to do with cultural anxiety and racial resentment. Anyone who bothers to examine the empirical evidence, or for that matter listens to Trump slamming black athletes as “sons of bitches” or Elizabeth Warren as “Pocahontas” in front of cheering crowds, is well-aware of the source of his appeal.

The problem, however, with trying to repeatedly rebut all this talk of “economic anxiety” is that it’s a zombie argument. As Paul Krugman has observed, these are arguments “that have been proved wrong, should be dead, but keep shambling along because they serve a political purpose.” Or as the science writer Ben Goldacre has put it, arguments that “survive to be raised again, for eternity, no matter how many times they are shot down.”

To be clear: “Economic anxiety” has been shot down repeatedly by the experts over the past 18 months. Four damning studies, in particular, stand out from the rest.  The first appeared in May 2017, a month after I wrote my original piece, when The Atlantic magazine and Public Religion Research Institute, or PRRI, published the results of a joint analysis of post-election survey data. Did poor, white, working-class voters back Trump in their droves? Was it the economy, stupid?

Nope. The PRRI analysis of more than 3,000 voters, summarized The Atlantic’s Emma Green, “suggests financially troubled voters in the white working class were more likely to prefer Clinton over Trump.” Got that? Hillary Clinton over Trump. Meanwhile, partisan affiliation aside, “it was cultural anxiety — feeling like a stranger in America, supporting the deportation of immigrants, and hesitating about educational investment — that best predicted support for Trump.”

In fact, according to the survey data, white, working-class voters who expressed fears of “cultural displacement” were three-and-a-half times more likely to vote for Trump than those who didn’t share these fears.

We find that racism and sexism attitudes were strongly associated with vote choice in 2016, even after accounting for partisanship, ideology, and other standard factors. These factors were more important in 2016 than in 2012, suggesting that the explicitly racial and gendered rhetoric of the 2016 campaign served to activate these attitudes in the minds of many voters. Indeed, attitudes toward racism and sexism account for about two-thirds of the education gap in vote choices in 2016.

Racism and sexism. Who’d have guessed?

Third, in April 2018, Stanford University political scientist Diana Mutz published a study in the Proceedings of the National Academy of Sciences that observed how “living in an area with a high median income positively predicted Republican vote choice to a greater extent in 2016,” which is “precisely the opposite of what one would expect based on the left behind thesis.” Mutz found no evidence that a decline in income, or a worsening “personal financial situation,” drove working-class voters into the welcoming arms of a billionaire property mogul. Nor did a decline in manufacturing or employment in the area where Trump voters lived.

So what did she conclude?

Are you still not convinced? Do you still prefer to cling to a bogus claim that just won’t die? Well, the latest zombie-killing study was published last week by the Democracy Fund’s Voter Study Group and co-authored by George Washington University political scientist John Sides (both the Democracy Fund and First Look Media, the Intercept’s parent company, were created by Pierre Omidyar). The VSG report concluded that the “prevailing narrative” of the 2016 election, focused heavily “on the economic concerns of Americans,” and especially “the white working class,” is “flawed” and “misplaced.”

Sides and his co-author Robert Griffin found that “economic anxiety was actually decreasing, not increasing” in the run-up to the presidential election and “what was distinctive about voting behavior in 2016 was not the outsized role of economic anxiety,” but “attitudes about race and ethnicity” that were “more strongly related to how people voted.”

According to their study (which focused on a much tighter concept of “economic distress” based on voters’ direct experiences with financial instability or hardship):

Do I really need to continue? Do I need to cite more studies? More surveys? How can this still be a matter for debate?

To be clear, and to repeat what I wrote last year, this isn’t to say that economic grievances are irrelevant, or that racial and cultural grievances were the only drivers of support for Trump. To quote the three academics at the University of Massachusetts, Amherst, “it would be misguided to seek an understanding of Trump’s success in the 2016 presidential election through any single lens. Yet, in a campaign that was marked by exceptionally explicit rhetoric on race and gender, it is perhaps unsurprising to find that voters’ attitudes on race and sex were so strongly associated with their vote choices.”

So why does this still matter, in 2018? For a start, as Mutz points out, “Trump’s victory may be viewed more admirably when it is attributed to a groundswell of support from previously ignored workers than when it is attributed to those whose status is threatened by minorities and foreign countries.” Plus, she adds, “elected officials who embrace the left behind narrative may feel compelled to pursue policies that will do little to assuage the fears of less educated Americans.”

This is the key point to consider for those on the left who have foolishly, if perhaps with the best of intentions, embraced the “left behind” thesis. They see economic and financial insecurity as the root cause of Trumpism, which they then feel justifies their support for policies such as a higher minimum wage or universal health care. These progressive economic and social policies, however, deserve our support because they’re morally and economically correct – and not because they might win over Trump voters in 2020. (Spoiler alert: They won’t and they may even further antagonize white working-class voters who see them as “handouts” for non-white working-class voters.)

Both race and class matter, and both have to be at the center of a left-wing, pro-poor, anti-Trump politics. But that doesn’t change the fact that, in 2016, race trumped class. The reality, as Mutz reminds us, is that the election of Trump “was an effort by members of already dominant groups to assure their continued dominance and by those in an already powerful and wealthy country to assure its continued dominance.”

This is what the left has to challenge. Of course the right wants to exonerate Trump voters from charges of racism, bigotry, and misogyny, but the left has to call it as it is. The Trump election was a “whitelash.” It’s time to slay this zombie of “economic anxiety” once and for all.