In the weeks after Brett Kavanaugh was accused of sexual assault, George W. Bush personally called wavering senators to lobby on the nominee’s behalf. 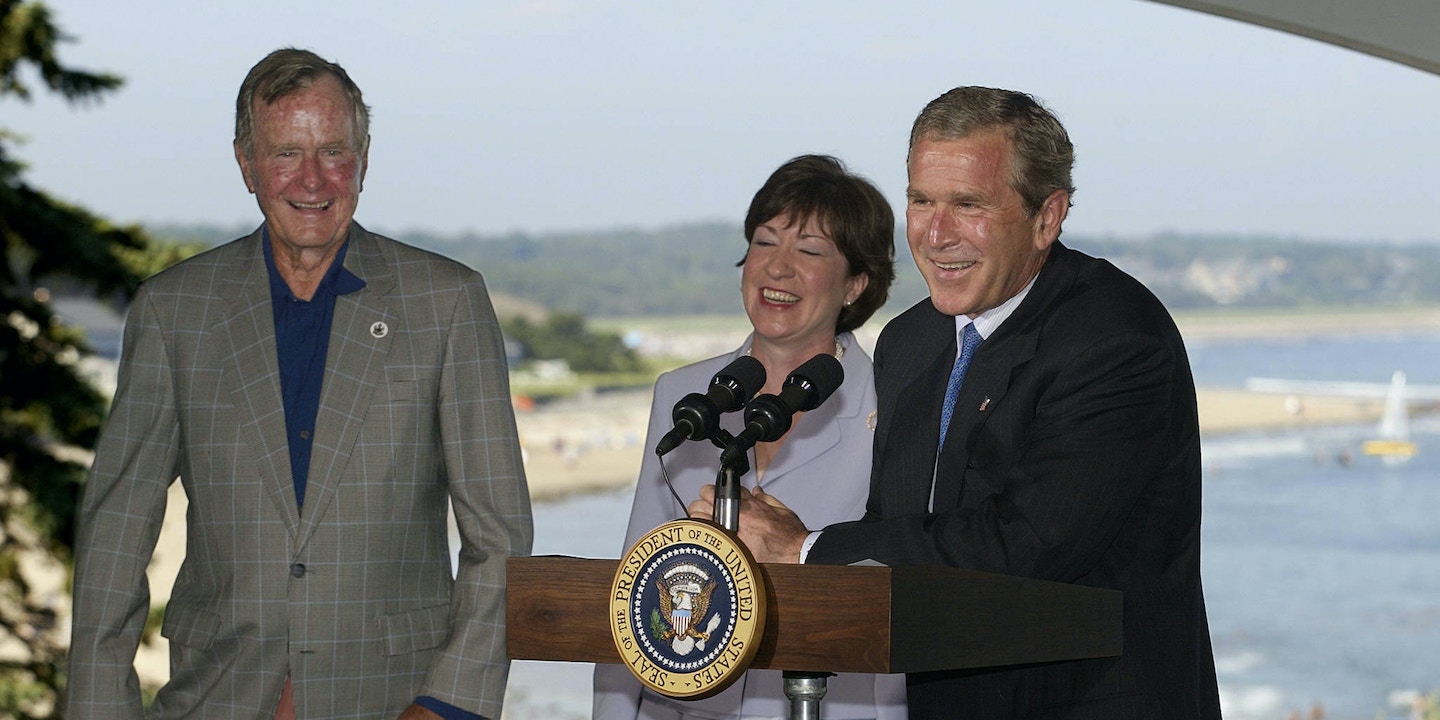 The announcement Friday by Sen. Susan Collins, R-Maine, that she would vote to confirm Brett Kavanaugh to the Supreme Court was about family. Namely, the Bush family.

George W. Bush and his father, George H.W. Bush have both been welcomed into the ranks of the resistance to President Donald Trump, but their most consequential action since his election has been to help lift Kavanaugh into the Supreme Court.

Collins is an honorary member of the Bush family. She got her start in politics as a congressional aide to Rep.-turned-Sen. William Cohen. The Maine Republican was close to George H.W. Bush, who has long maintained a presence in the state.

At the end of the first Bush administration, Collins was appointed New England regional director of the Small Business Administration. In 1996, she was elected to the Senate to replace her mentor, Cohen.

Kavanaugh, too, has longstanding ties to the Bush family. He served as an attorney for George W. Bush’s campaign, playing a major role in the legal battle between Bush and Al Gore. He then served as staff secretary in the Bush White House, a position of intimate influence — the staff secretary attends most Oval Office meetings and is a trusted sounding board for the president.

Bush nominated Kavanaugh to the D.C. Circuit Court of Appeals in 2003 and Democrats put up a serious fight, arguing that he was far too partisan to be within striking distance of the Supreme Court. The pushback dragged the confirmation process out for three years, and he wasn’t confirmed until 2006. Bush stuck by him throughout it, and Kavanaugh refused to withdraw. In 2004, while his nomination languished, Kavanaugh married Ashley Estes, who had been George W. Bush’s personal secretary dating back to his days as Texas governor. They had met in the Oval Office, and the Bushes attended the wedding.

Fast-forward to Kavanaugh’s nomination to the Supreme Court. In the weeks after Kavanaugh was accused of sexual assault during his high school and college years, Bush personally called wavering senators, lobbying on the nominee’s behalf. Collins, who had said she would not vote to confirm a Supreme Court justice who would overturn Roe v. Wade, was one of those wavering senators. In August, HuffPost reported, citing a source close to Collins’s staff, that Collins had assured the White House that she would support Kavanaugh if he were nominated. (She has denied that.)

Collins has since said that the decision was a difficult one, though there was no hint of that agonizing in her Senate floor speech Friday, which was a full-throated defense of Kavanaugh and a prosecution of Christine Blasey Ford’s allegations.

Collins calmly laid out her arguments for Kavanaugh’s fitness for a lifetime appointment to the Supreme Court. She said she believed he would maintain protections for Americans with pre-existing conditions seeking medical care; that he would not hesitate to vote against the favor of Trump should the situation arise; that he would support same-sex marriage and access to contraceptives; that he would honor the precedent set in Roe v. Wade “as a constitutional tenet that has to be followed.” Of course, if all of those things were true, conservatives would not have enthusiastically embraced Kavanaugh as their man for the Supreme Court.

The Maine senator went on to laud the organizations that have supported Kavanaugh throughout his judicial career, including the American Bar Association. It became clear as Collins made this point that she had not yet seen the letter from the ABA to the Senate Judiciary Committee released Friday morning, announcing a plan by the group’s standing committee to reopen its evaluation of Kavanaugh.

When the subject turned to Ford, Collins was careful to make clear that she did indeed believe Ford was sexually assaulted. She just didn’t think it was by Kavanaugh. She went out of her way to break down each point in Ford’s testimony that did not “meet a standard of more likely than not,” conflating a Senate confirmation process for a lifetime appointment to the Supreme Court with a civil trial.

Collins took pains to point out that Ford’s own friend who she had placed at the party where her alleged assault occurred, Leland Keyser, said she didn’t know Kavanaugh. The senator asked why, if Ford left the party early without saying bye to anyone, no one called the next day to ask why she left, or if she was OK. “It is when passions are most inflamed when fairness is most in jeopardy,” Collins said, arguing that due process concerns drove her thinking.

In the end, Collins suggested that she hoped Kavanaugh’s nomination would restore the faith of Americans in the Supreme Court, easing partisan tensions and decreasing the number of 5-4 decisions the court handed down.

It’s difficult to rationalize the idea that a nomination as contentious as this would usher a return to a more harmonious era of bipartisan collaboration.

Sen. Lisa Murkowski, R-Alaska, meanwhile, said that she hadn’t made her decision to vote against Kavanaugh until she walked onto the Senate floor on Friday morning. The decision for her, she said, was based on two competing values — Kavanaugh’s qualifications as a judge, and the defense of the integrity of American political institutions — not just the Senate, but also the Supreme Court.

Kavanaugh, during his hearing last week, put on a vitriolic display of partisan anger not seen in the modern confirmation process. He called Democrats on the panel “you people” and said that his critics were part of a well-financed conspiracy to enact “revenge on behalf of the Clintons.”

On Thursday night, he took the extraordinary step of publishing a semi-apology for his outbursts in the Wall Street Journal, acknowledging that he may have been “too emotional.” But he did not take back his own threat of revenge — “what goes around, comes around,” he told the committee — nor did he acknowledge that his outburst was a part of his prepared remarks, not a spontaneous reaction to being challenged.

Sen. Jeff Flake, R-Ariz., who on Friday also said he’d be voting to confirm Kavanaugh, said earlier this week that Kavanaugh’s tirade should be considered as part of the the decision-making process. He said, “We can’t have that on the court.”