Members of the Council for National Policy gathered in Charlotte, North Carolina, this weekend and discussed the path forward with Kavanaugh on the bench. 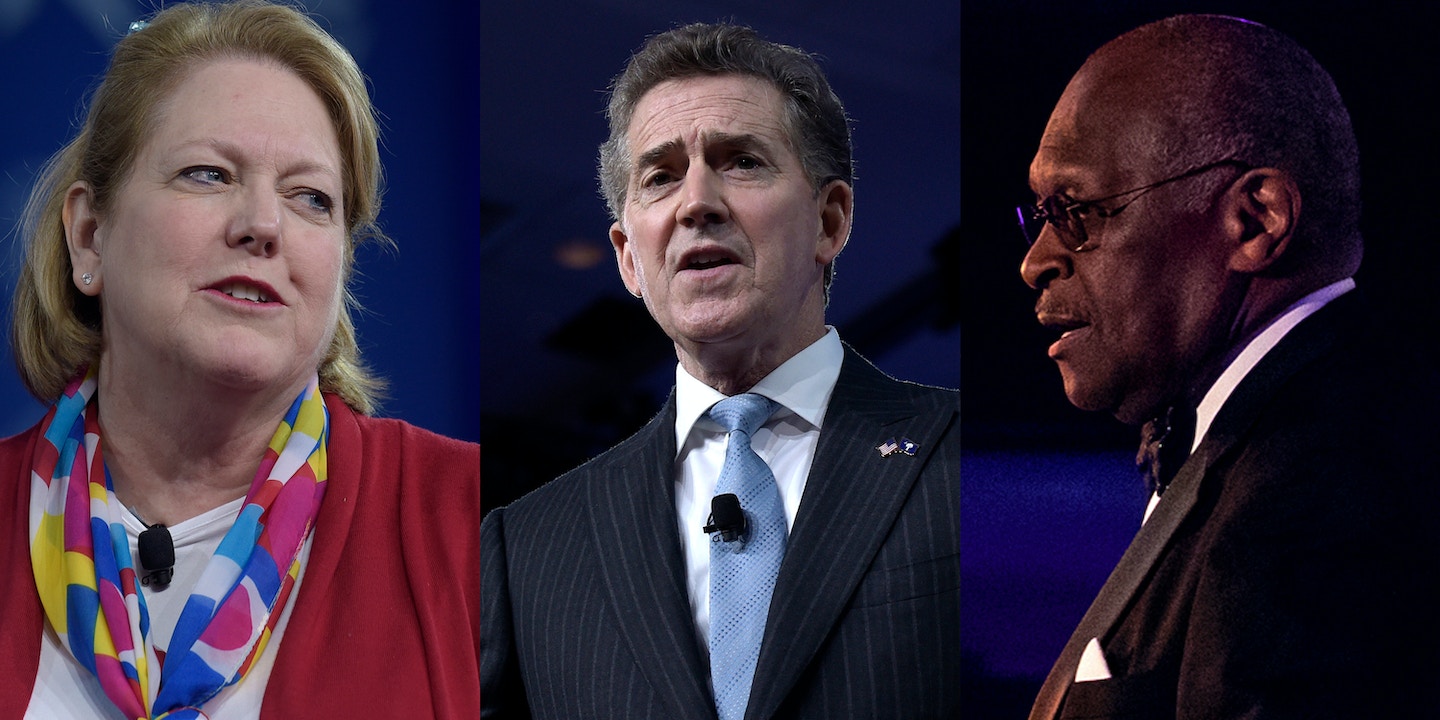 As the Senate prepared to vote to confirm Brett Kavanaugh to the Supreme Court on Saturday afternoon, evangelical Christian leaders were gathered at a secretive retreat in North Carolina to plan the conservative movement’s path forward.

The Council for National Policy, which operates covertly and brings together faith-based conservatives to discuss political strategy, was holding a planning meeting in a second-floor ballroom at the Westin hotel in Charlotte when the Senate confirmed President Donald Trump’s second Supreme Court pick by a 50-48 vote.

After a tumultuous few weeks in which Kavanaugh was accused of sexual assault, the group had remained cautious until the final moments, several participants told The Intercept. Following the Senate’s procedural vote on Kavanaugh’s nomination on Friday, the CNP attendees gathered that evening during dinner to pray that victory was near.

Their prayers, it seems, were answered. Kavanaugh’s confirmation cemented a decadeslong push to cement a conservative majority on the high court, an objective long desired by the CNP.

The agenda for the event featured a veritable who’s who of Christian conservatives, including Ginni Thomas, the spouse of Justice Clarence Thomas; U.S. Ambassador to the U.N. Nikki Haley; former Sen. Jim DeMint, the former president of the Heritage Foundation, a conservative think tank; pollster Frank Luntz; and Rep. Jim Jordan, R-Ohio, who is seeking a leadership role in the House after Speaker Paul Ryan, R-Wisc., retires this year.

The three-day event, which started on Friday, was held largely under the radar. It was closed to the media, attendees were forbidden from recording its proceedings, and even its location was a strictly guarded secret. The Intercept was barred from approaching the areas of the hotel at which the conference was being held, but we were able to interview some attendees in the lobby outside.

To CNP founding member and Texas oil fortune heir T. Cullen Davis, Kavanaugh’s vote on the Supreme Court will help protect the religious liberties that the CNP perceives to be under attack at schools. “On the particular issue of prayer of school, they’re teaching the Muslim religion in school now, but they can’t say the name Jesus,” Davis said. “It’s a tragedy. I would like to see prayer back in school.”

Davis said he was pleased so far with Trump’s leadership but that he remains unsure of Trump’s commitment to the faith. “I really don’t know his relationship to Jesus Christ, but he is not hostile to Christianity like Hillary [Clinton] and [Barack] Obama,” he added.

“He will hold to the Constitution, of course we are happy. It was God’s will,” said another participant who declined to be named. The final vote and the accusations against Kavanaugh were “a test of the faithful,” the participant added.

Others expressed anger at the treatment of Kavanaugh, who was confirmed with the closest Senate vote for a Supreme Court nominee in more than a century.

“It was a liberal media mob,” said radio host Herman Cain, a longtime CNP participant, noting that critics had raised similar allegations about sexual harassment when he ran for the Republican nomination for president. When allegations emerged in 2011 that women had received settlements regarding harassment from Cain during his tenure at the National Restaurant Association, Cain dismissed the reports as a “witch hunt.” He later confirmed the settlements were paid out but denied the nature of the allegations.

Referring to the past controversy, Cain said the media did not want an “articulate black Republican” to win the GOP nomination, so it manufactured a scandal.

The allegations against Kavanaugh, Cain argued, were part of a Democratic plot to spin the media. He said every allegation “couldn’t be corroborated,” and he agreed with Republican Sen. Chuck Grassley’s unfounded contention that liberal billionaire George Soros was likely paying protesters on Capitol Hill.

“Every time I had to watch a report about what they were doing to Kavanaugh, it was like a dagger in my stomach,” said Cain.

Many participants, including CNP executive director Bob McEwen, a former Republican lawmaker from Ohio, were unwilling to speak to The Intercept, citing CNP’s strict rules around media.

The Judicial Crisis Network, a dark money organization that aired at least $12 million in television advertisements in support of Kavanaugh, has sent representatives to recent CPN retreats. At the retreat this weekend, a representative from CRC Public Relations, the public relations firm tapped by Judicial Crisis Network to build support for Kavanaugh’s nomination, was listed on the event program on panels discussing messaging and social media strategies.

Ed Whelan, a conservative legal operative who vets and builds support for Republican nominees, gave a presentation to CNP at the organization’s February 2017 retreat in Orlando on Trump’s strategy for rapidly appointing judges. Last month, Whelan, under guidance from CRC Public Relations, tweeted a false allegation against Christine Blasey Ford, who had accused Kavanaugh of sexually assaulting her when the two were in high school, attempting to undermine her credibility.

The Faith and Freedom Coalition, another group that presented at the CNP conference, said in an email after the confirmation vote that it had produced more than 800,000 pieces of direct mail, 400,000 peer-to-peer text messages, and 1 million emails to Christian conservative voters in support of Kavanuagh’s confirmation. 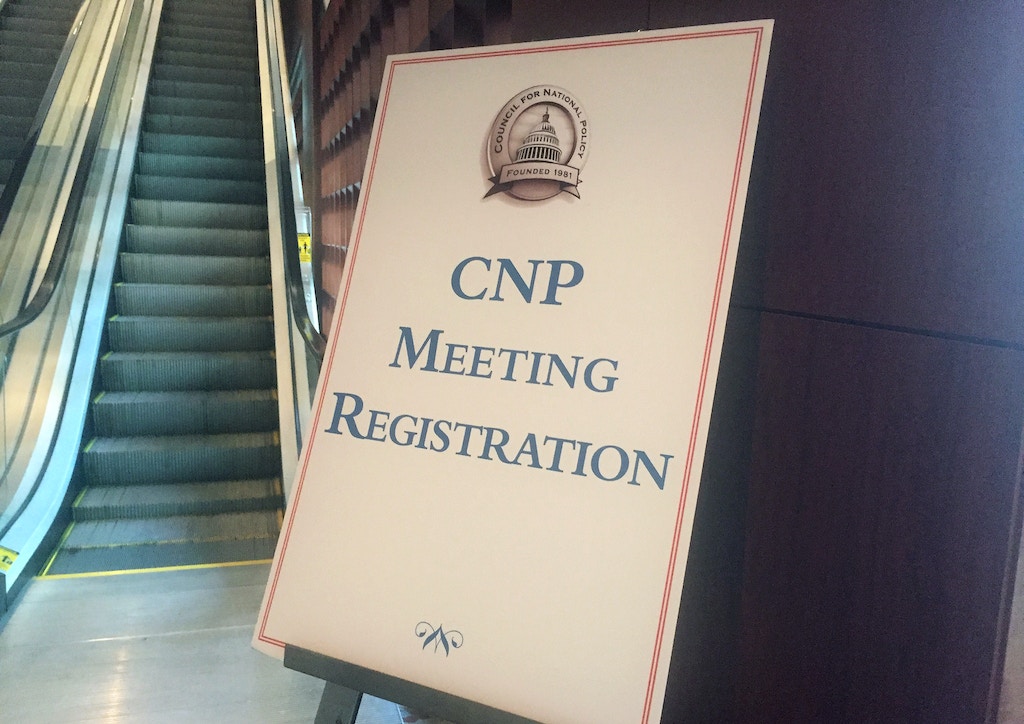 A sign in the lobby of the Westin Hotel in Charlotte, N.C., where the Council for National Policy retreat was held on Oct. 7, 2018.

CNP has famously focused on challenging the perceived liberal dominance of the judiciary. The 37-year-old organization does not publicize its meetings, but over the years, reporters have gained limited access to learn about its advocacy, including the involvement of prominent Christian right pressure groups that lobby on judicial issues and frequently litigate before the Supreme Court.

In 1999, when George W. Bush addressed the group, rumors swirled that the then-presidential candidate gained evangelical support by promising to support anti-abortion judges to the bench. CNP also reportedly blessed the choice of Sarah Palin as the late Sen. John McCain’s running mate in 2008.

Over the last year, CNP has been involved in efforts to pressure Senate Republicans to rapidly confirm Trump’s judicial nominees. “In delaying the confirmation of President Trump’s appointees, the Senate is directly limiting the President’s effectiveness,” wrote CNP leaders, through an affiliate group, in a widely circulated letter last year.

The organization was formerly led by Christian minister Tim LaHaye, the author of a popular series of books depicting an apocalyptic destruction of the world prophesied in the Bible. LaHaye and his wife also founded Concerned Women for America, the anti-abortion activist group now led by Penny Nance. CWA is a longtime participant in CNP meetings and currently sponsors the ad-hoc group Women for Kavanaugh, which mobilized rallies across the country in support of Trump’s Supreme Court pick. Trump tweeted his praise for the group hours before the confirmation vote.

In the lobby of the Westin hotel on Saturday, conservative activists huddled after a day of meetings. Mathew Staver, the chair of Liberty Counsel, a litigation group that represented Kentucky county clerk Kim Davis when she refused to issue marriage licenses to same-sex couples in 2015, was in attendance. Frank Gaffney, the former Reagan official and anti-Muslim activist, was also present.

In an interview, Cain described the presentation he gave to the group on Saturday morning.

During his remarks, he described the biblical battle between Gideon and the Midianites, Cain told The Intercept. God, Cain said, told Gideon not to overwhelm his enemy, and instructed him to pare down his army to only 300 soldiers to face an army of thousands of Midianites.

“Totally outnumbered. God said, this way when you win, and you defeat the Midianites, you know it was because of me,” said Cain. “He defeated the Midianites with 300 men up against thousands and thousands.”

“That’s what this organization is like,” continued Cain, describing CNP. “It’s like Gideon’s army. We’re outnumbered, but we still win. Kavanaugh, the voices against him outnumbered the voices for him, but looks like he’s going to win.”