The far-right politician has repeatedly encouraged violence, but says he has no influence over supporters’ actions. As Brazil’s far-right presidential candidate Jair Bolsonaro steams ahead to what seems a likely victory on October 28, a climate of fear is spreading amid mounting reports of violence against non-supporters and journalists — including online intimidation, physical attacks, and even murder. His rival, Workers’ Party candidate Fernando Haddad, trails by 18 points in the latest polls.

In Salvador, the country’s capital of Afro-Brazilian culture, Paulo Sérgio Ferreira Santana was jailed last week for the killing of Moa do Katendê, a master of the Afro-Brazilian martial art capoeira, in a bar, hours after Bolsonaro narrowly missed winning the election in the first round of voting.

Eyewitnesses said the pair argued about politics and traded insults before Santana, a Bolsonaro supporter, paid his bill, left, returned with a knife, and stabbed the capoeira master, a Workers’ Party supporter, 12 times in the back.

“Some guy with one of my shirts commits an excess. What do I have to do with it? I lament it.”

At a rally last month, Bolsonaro grabbed a camera tripod and pretended to shoot it like a rifle, telling a crowd of enthusiastic supporters, “Let’s shoot the petralhada here,” using a derogatory term for Workers’ Party voters. It was hardly an isolated comment in his decades-long career of praising torture, hate crimes, and political violence. The candidate, however, denied any responsibility for Katendê’s death. “Some guy with one of my shirts commits an excess,” said Bolsonaro. “What do I have to do with it? I lament it.”

He pointed out that, in fact, he was a victim of electoral violence, referencing a recent incident where he was stabbed by a mentally ill attacker while on the campaign trail, which landed him in a hospital for three weeks. “I ask people not to do this,” he added. “I have no control over millions and millions of people who support me.”

Since September 30, more than 70 politically motivated attacks and threats have been documented across Brazil — at least 50 of which were perpetrated by Bolsonaro supporters and six against them, according to data from the Brasil.io data lab, Agência Pública, and Open Knowledge Brasil. The numbers do not include online threats and harassment.

A pro-Bolsonaro media site questioned the legitimacy of the report, because Agência Pública receives funding from George Soros’s Open Society Foundations, adding that it “will not go into the merits of analyzing the veracity of the cases reported in the article.”

Brazil is one of the world’s most violent countries, with nearly 64,000 homicides last year, the vast majority of which have gone unsolved. Political murders and violence are common in the country: An average of nine elected officials are killed per year, and 28 candidates were murdered nationwide in the 2016 municipal election cycle — but usually because of land, property, or economic interests.

“People didn’t kill each other before because of what another demanded from the world politically. It’s a result of this election,” said Bruno Paes Manso, a researcher at the Center for the Study of Violence at the University of São Paulo, which maps and publishes data on Brazil’s homicides.

“It’s a different justification to kill – as much as emotion, alcohol, or provocation might be involved,” he said. “The fact that immediate interests such as land or property aren’t involved is something new,” he added.

Bolsonaro, a former army captain, has said that “violence can only be combated with violence,” that “minorities have to shut up and bend to the majority,” and once called for former Brazilian President Fernando Henrique Cardoso to be executed.

“It’s a discourse of war,” said Manso. “Against an enemy.”

Multiple incidents of women being beaten or harassed for wearing anti-Bolsonaro stickers have been reported across the country, adding to a climate of fear among social groups targeted by Bolsonaro’s rhetoric.

In Nova Iguaçu, just north of Rio de Janeiro, a transgender woman was reportedly beaten with a metal bar while her attackers yelled transphobic insults, including, “I hope Bolsonaro wins to kill this piece of trash.” Videos of soccer fans, inside and outside of stadiums, singing, “Bolsonaro will kill faggots!” have flooded social media in recent weeks. 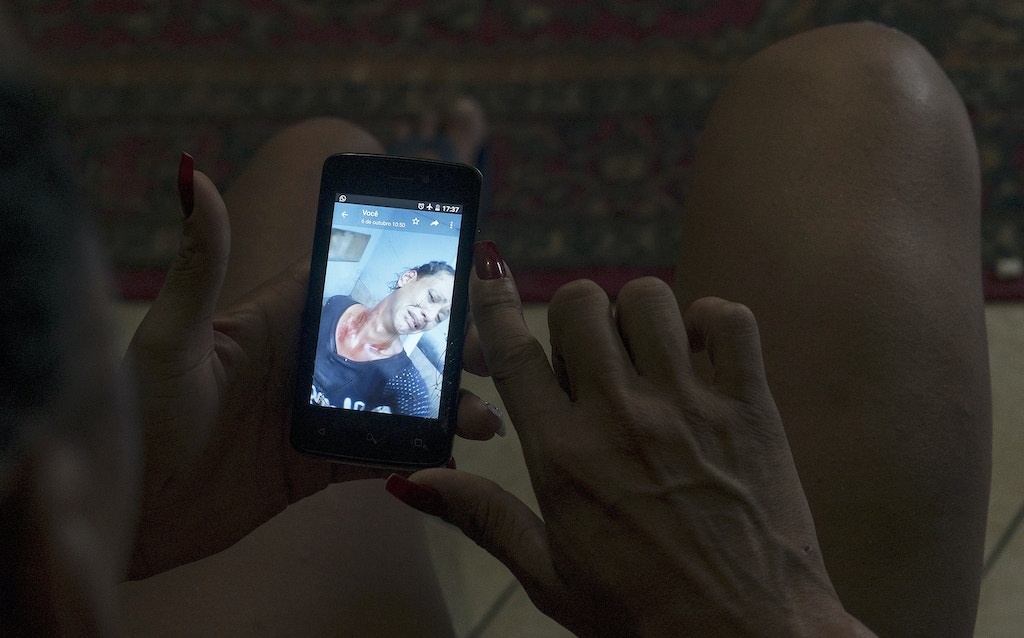 Julyanna Barbosa shows selfies that document her injuries after she was attacked at a bus stop in Nova Iguacu, Brazil, on Oct. 12, 2018.

As the nation went to the polls, images circulated online of a Bolsonaro supporter using a pistol to push buttons in a voting booth. Police investigated and the gun turned out to be a toy.

Last week, a video game in which a Bolsonaro character trawls the streets beating up mostly black “thugs,” feminists, transgender people, and journalists was blasted by Brazil’s electoral court for “inciting hate crimes” – a charge that Bolsonaro himself has faced in the past.

Last Wednesday night, Bolsonaro and Haddad both released notes condemning the violence. Bolsonaro went to Twitter to reject the votes of or association with those who practice violence against his rivals and asked that they cast a blank ballot or for “the opposition for consistency, and that the authorities take the appropriate measures, as against slanderers who try to harm us.”

The next day, Joice Hasselmann, a former journalist disgraced for serial plagiarism and now congresswoman-elect with Bolsonaro’s Social Liberal Party, posted a video on her popular YouTube channel explaining that Workers’ Party militants dressed in Bolsonaro T-shirts were inciting violence.

The electoral violence has been accompanied by a rise in attacks on journalists and media professionals. Brazil’s Association of Investigative Journalism, or Abraji, has assembled a list of 138 attacks against journalists in 2018, 62 of which have involved physical violence.

Mistrust of Brazil’s highly concentrated and oligarchical media was already on the rise among all sectors of society, a phenomenon that Bolsonaro has stoked throughout his campaign.

During the first round vote, supporters outside Bolsonaro’s home blasted journalists from the billionaire-owned Globo network as “communists.”

Violence against journalists in Brazil was already a very real phenomenon. Since 2013, 16 journalists have been killed for their work, according to the Committee to Protect Journalists.

Most of the killings happen in Amazon or interior cities, targeting journalists or radio hosts who reported on local corruption. Earlier this year, there were reports of journalists being intimidated while covering the controversial jailing of former President Luiz Inácio Lula da Silva.

Digital threats and harassment have also become increasingly common, and the sheer volume and ferocity of attacks over this electoral period is extremely worrisome, observers say.

“When there are coordinated attacks on a person’s reputation, publishing of personal details, which we have seen a lot of, this worries us a lot. It’s a new tendency, and we have to be prepared,” said Daniel Bramatti, president of Abraji and head of data journalism at the Estadão newspaper.

Bramatti said female journalists are especially vulnerable to attacks. In northeastern Pernambuco state, a journalist reported being violently attacked by two men who brandished a knife and threatened to rape her after calling her a “leftist.” One of the men was wearing a “President Bolsonaro” T-shirt.

“Female journalists suffer much more” than their male counterparts, notes Janaina Garcia, head of the Journalists Against Harassment collective. “By calling her a slut or a whore and using threats of sexual violence,” she says, “misogyny is being used to disqualify” female reporters’ work.

The climate of violence against journalists is stimulated by constant accusations of “fake news” and attempts to delegitimize the media, Bramatti said.

In the runup to the vote, Hasselmann posted on her right-wing YouTube channel that a Brazilian magazine had received $152 million to smear Bolsonaro.

But while denouncing reports that discredit Bolsonaro as “fake news,” his supporters are responsible for a tidal wave of misinformation.

In open WhatsApp groups set up by Bolsonaro supporters, videos and pictures with titles like “Haddad’s Friend says Jesus is Gay” and “Haddad promises to take 350 thousand prisoners out of jail” are shared, as well as images linking Haddad to the sexualization of children.

Elsewhere, one of Bolsonaro’s sons was falsely depicted wearing a T-shirt with offensive remarks about Brazil’s northeastern population.

“We know the importance of freedom of the press,” Bolsonaro posted on Twitter last Thursday, after retweeting a follower claiming that the Bahia killing had not been committed by a Bolsonaro voter, as had been widely reported. The candidate added, “Trash press!” 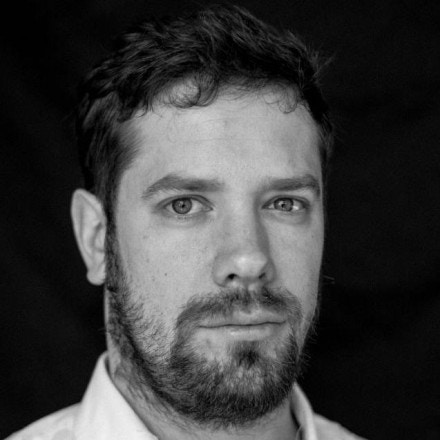