Fraudsters who target vulnerable Americans are raking in millions and financing gang warfare in the Caribbean nation. 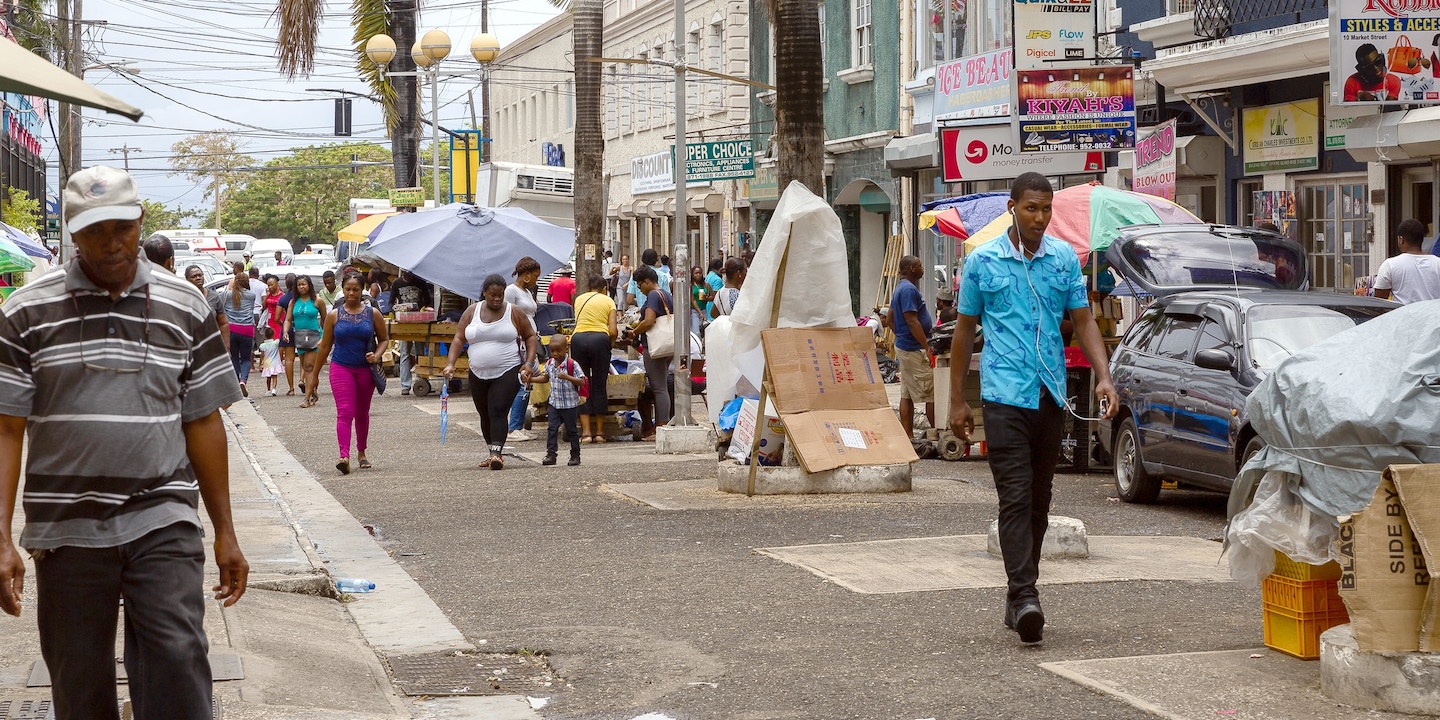 The day Michael E. Little killed himself, the winning Mega Millions lottery numbers in North Dakota were 25, 32, 37, 45, and 70. In the months before his death on October 25, 2015, a smooth talker with a Jamaican accent had called Little and told him that he had won the jackpot. Little had suffered several strokes that left him physically disabled, mentally confused, and unable to work. He lived on welfare, alone and isolated in a trailer park in Bismark, North Dakota. The voice at the other end of the line seemed like his only hope.

The caller promised Little millions of dollars, a new Mercedes Benz, and a television crew at his door to record the handover of the money. But there was a small catch. In order to receive his prizes, Little needed to send the caller a clearing fee of a few thousand dollars for taxes and administration. Little’s family knew there was a problem when he asked to borrow $10,000. They changed his phone number, but he changed it back. Before Little’s brother could complete the process of applying for guardianship, Little was dead.

The person who called Little had a Jamaican accent and appears likely to have been a fraudster who was operating 2,347 miles away in the Caribbean nation, where the practice of “lotto scamming” is rife. Jamaican phone scammers are estimated to rake in at least $300 million per year, often obtaining their profits by targeting vulnerable people.

Lotto scamming has had devastating consequences – not just for its victims in the U.S. and elsewhere, but for Jamaica. The scams have helped finance gang warfare in the western part of the country, which has in turn led to a spike in the number of murders, leaving Jamaica with the sixth-highest murder rate in the world last year. Since January, a state of emergency has been declared in three of Jamaica’s major districts, with armed soldiers deployed into the streets in an effort to contain the violence. A lower-income area of the Mount Salem neighborhood of Montego Bay, photographed on May 18, 2018, which has been greatly affected by the violence and crime due to lotto scamming.

A billboard outside of Jamaica’s Sangster International Airport welcomes visitors to the “friendly city” of Montego Bay, the tourist capital of the island. Once a sleepy resort town for a host of international glitterati, from Marilyn Monroe to John F. Kennedy, Montego Bay has in recent years become more associated with gang warfare and fraudsters than jet-setters and rum punches. The area now has highest number of murders in Jamaica.

Montego Bay is home to most of Jamaica’s international call centers, where hundreds of employees handle inquiries for companies such as Xerox and VistaPrint. Police say the call centers are part of the reason Montego Bay has become a hub for fraud: Scammers use them to glean lists of potential targets and also to train in phone etiquette. Former hotel front desk workers and call center operators now put their hospitality training to use in telephone scamming, swapping minimum wages of $US52 a week for up to $US100,000.

“Now, any little idiot can be a scammer.”

Scamming is the latest chapter in a long history of crime and violence that Jamaica has struggled to control. In the 1970s, politicians formed relationships with criminal community leaders called “dons,” who ensured the votes of the community in exchange for political favors and government contracts. When the Jamaican economy crashed in the 1970s, politicians could no longer afford to bankroll dons, who turned to the drug trade to support themselves. After a crackdown on the drug trade in the late 2000s, the criminal world fractured. For criminals looking to diversify their portfolios, scamming was the perfect addition.

According to police, scamming took hold in Montego Bay after several high-profile drug dealers were extradited to the United States. Fitz Bailey, the former head of the Jamaican police department’s Organized Crime Investigations Division, said the extraditions created an economic void in western Jamaica — a hole that lotto scamming filled.

Some Jamaicans long for the days of the drug dealer, which they say brought organization and leadership. A 70-year-old Montego Bay resident, who spoke on condition of anonymity due to concerns for his safety, told The Intercept that the drug dealers needed the protection of the community and so were more community oriented than the scammers.

Six days a week, Floyd Foster kisses his young son goodbye and then commutes to his job as a lifeguard in one of the all-inclusive resorts in Montego Bay.

Foster, in his 30s with a tall and lanky frame, permanently wears sunglasses to protect his eyes, which suffer from a degenerative condition. Each morning he drives past soldiers armed with M16 rifles, who have patrolled his Mount Salem community around the clock since the state of emergency began in January. The soldiers were sent in to the area to check identification and enforce a 7 p.m. curfew; their presence has recently started to wane, but remains strong in other parts of the island, where they have detained more than 2,500 people, mostly young men from inner-city communities. Floyd Foster, photographed at his job at youth center Mandingo Youth Center which he runs to keep kids away from violence and lotto scamming in Jamaica on May 17, 2018.

Only about 5 percent of those taken into custody have reportedly been charged, mainly with minor criminal offenses, which has prompted concerns from some locals that law-abiding youngsters are being arbitrarily detained as part of an indiscriminate policy. But Foster doesn’t mind the soldiers; because of their presence, he says, the community, for the first time in years, has been able to sleep without gunshots ringing out through the night.

Foster drives down a road that splits his community in two. On his left is the “nice” area, filled with middle-class housing. On the right, he passes the lower-class “ghetto” area, where he says lotto scamming has destroyed the community with crime and violence. Four of his childhood friends have been killed in the turmoil. He has since started the Mandingo Youth Club to empower children through creative activities, encouraging them to stay away from violence, crime, and lotto scamming.

Growing up, Foster saw friends go into the scamming business, and then turn on each other in arguments over profit. The violence associated with scamming is typically over business deals gone wrong, followed by reprisal killings. Gangs become involved when the scammers need protection or assistance in collecting money.

The scammers’ ostentatious lifestyles have gained them notoriety across Jamaica. They often live in lavish mansions, and videos circulate online of scammers setting wads of cash on fire and pouring bottles of champagne on BMWs. Foster feels this reputation is what has tempted the young people in his community – particularly young males – into lotto scamming.

Scamming is an attractive source of income in a country that suffers from high youth unemployment, crippling debt, and a sluggish economy. “What else do you expect people to do when they can’t make money to help their mothers?” said Foster. Vybz Kartel, a popular Jamaican dancehall musician, refers to scamming as “reparations” and considers it Jamaica’s due from slavery. But Foster says he can never condone scamming, because of the violence he has seen it cause.

Corruption within Jamaica has made it difficult to crack down on the perpetrators. Many police officers and soldiers have been arrested for themselves profiting from the fraudulent schemes, including one former police officer who was part of a group that stole more than $5.7 million. A 2016 Amnesty International report accused Jamaican authorities of routinely committing unlawful killings, tampering with evidence, and planting weapons on victims of police killings.

One of the founding fathers of Jamaican lotto scamming exemplified the corruption. Kenrick Stephenson, otherwise known as Bebe, was facing several lawsuits for fraud while also serving as vice chair of the People’s National Party constituency in his home area of Granville. Bebe had a highly unusual lifestyle. Not only was he a lotto scammer-cum-politician – he was also openly gay in a country notorious for rampant homophobia. But he wielded the power to rearrange some of the country’s norms. He dressed femininely and threw wild drag parties, an unheard of thing to do in Jamaica. He was murdered in 2014 at the gates of his mansion in the upper-class area of Ironshore, in a suspected gang-related killing. Prominent politicians, gay rights activists, and community members all attended his funeral, where rumors circulated that his casket was made of gold.

The bloodshed reached crisis point earlier this year. On January 16, outside Sangster International Airport, next to the Friendly City billboard, three men wielding AK-47s strolled across the main road and, in broad daylight, unloaded more than 70 bullets into a silver Nissan Tiida car. One man died, and another three were injured in what was believed to have been a gang-related attack. Two days later the government declared the state of emergency. 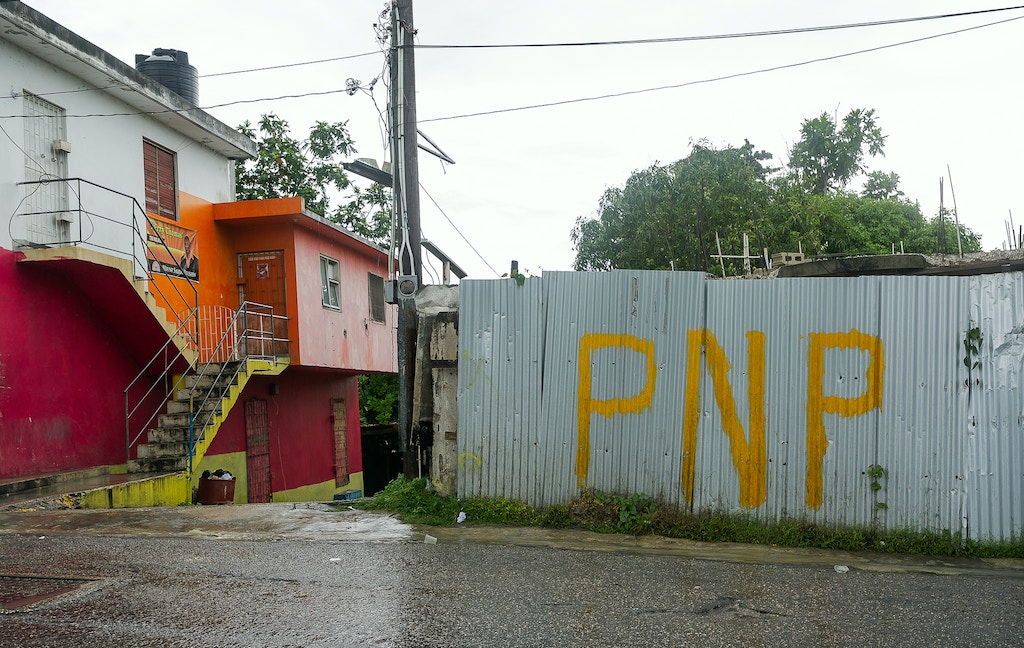 The state of emergency was only supposed to last two weeks, but has now entered its 10th month. When it was first announced, hundreds of soldiers descended on Montego Bay, and military and armed police guarded dozens of checkpoints set up at all the roads entering the area. Many residents say they don’t mind the heavily armed military presence, as they see the soldiers as more trustworthy than the police. The state of emergency has helped quell outbreaks of violence, but some residents believe that the gangs have only temporarily put aside their weapons and will resume business as usual once the soldiers leave.

Despite the crime and killings, Jamaica has continued to promote its image as an island paradise. Two weeks after the state of emergency was announced, the minister of national security, Robert Montague, renamed it “Enhanced Security Measures” to reduce the negative connotation for tourists. U.S. dollars, whether they are obtained through legitimate means or a scam, remain the lifeblood of Jamaica’s economy.

Correction: October 17, 2018
Due to an editing error, a previous version of this story stated that the soldiers who patrol the Mount Salem community in Jamaica carry M6 rifles. In fact, they carry M16 rifles.