Roger Waters, Marielle Franco, and the Power of Inspiration in the Face of Darkness and Danger

Impotence and hopelessness are a tactic, a lie told by those who wield power, to foster resignation, passivity, and acceptance. 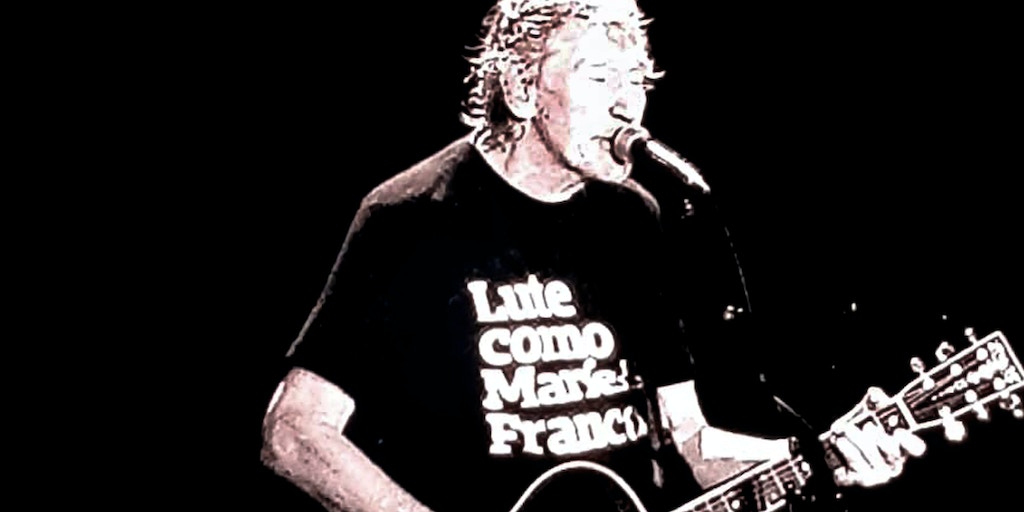 Roger Waters performing in Rio de Janeiro four days before the presidential election, wearing a shirt that reads “Lute Como Marielle Franco” (“Fight Like Marielle Franco”), given to him on stage by Franco’s widow, Mônica Benício

Last night was emotional and moving in so many ways and it occurred, of all places, at an outdoor Roger Waters stadium concert in Rio de Janeiro, Brazil: four days before this large, beautiful and struggling country, out of desperation, fear and anger, is likely to elect a genuinely menacing monster, and empower his movement in ways that were unthinkable until very recently.

Seven months ago, in the days following the brutal and devastating political assassination of our close friend Marielle Franco, The Independent asked me to write a tribute and an obituary. My first reaction was not to do it because the emotions were still way too raw and that kind of personal, intimate writing isn’t what I feel comfortable doing, especially in a moment as vulnerable and difficult as that.

But then I saw it as an opportunity to process my emotions about Marielle through what I know best and what she was most – writing about political battles and causes and figures of defiance and dissent – and to try to viscerally convey to a foreign audience what made her such a singular force of inspiration. So I wrote a 1,000-word article that was half obituary and half personal reflection. Unbeknownst to me, that article was published not only online but also in the paper’s print edition (I often forget print editions of anything exist). Roger Waters was in London on that day and happened to read it in the paper and was so moved by Marielle’s story that he cut the article out of the paper with scissors, folded it up, and put in his wallet. He told me earlier this week that he’s carried it around with him every day since, thinking about Marielle and reflecting on what her life, and death, meant.

Over the last three weeks, Waters has been touring Brazil, to sold-out massive stadiums, and using his platform for political statements at a time and place where that is needed more than ever. His denunciation of the rise of fascism in the form of Jair Bolsonaro at his first concert provoked boos and cancelled ticket sales, but he’s only escalated his political crusading since: not the cheap and superficial caricature of celebrity political statements but a deeply informed, compassionate and sophisticated messaging campaign that merges art and humanitarianism (not surprising for someone who has risked, and lost, so much from his enduring and relentless defense of Palestinians). 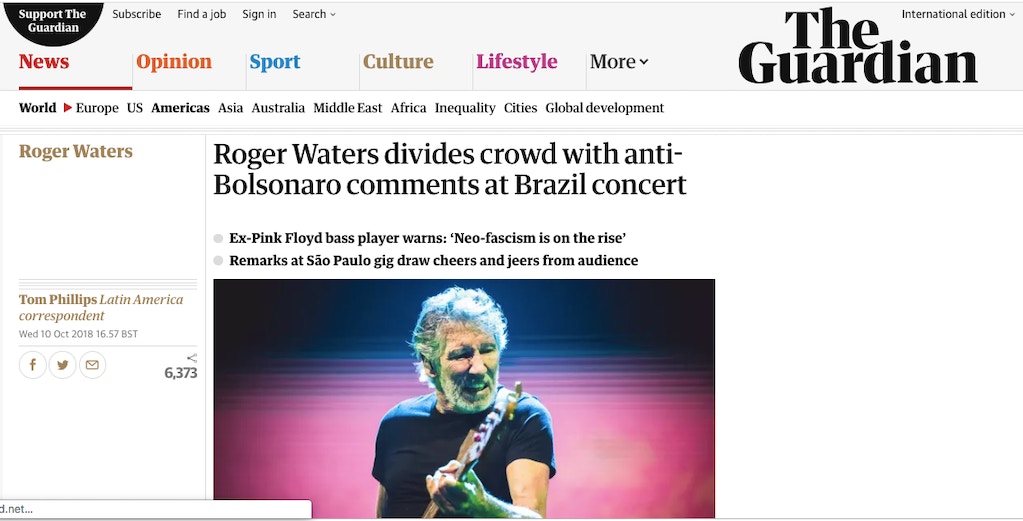 Last night, in Rio de Janeiro, he invited us to the show along with Marielle’s family – her 19-year-old daughter, Luyara Santos, her sister Anielle, and her widow Mônica Benício. He pulled my article from his wallet, talked about it and put a huge image of it on the screen, and then had the three of them on the stage to pay tribute to Marielle.

Fifteen minutes before that, Mônica was in tears with fear about going up, but once she got up there, they owned the stage, leading defiant chants demanding justice for Marielle and denouncing the fascism the country is on the brink of embracing. Mônica gave Waters a shirt that read “Lute Como Marielle Franco” (“Fight Like Marielle Franco”), which he put on and wore for the rest of the show (see above photo).

It was an incredibly powerful and poignant moment at a dark and grim time for Brazil. Waters said he regards Marielle as “the real leader of Brazil” – meaning the values that she represents are what can lead Brazil out of the heinous path it’s about to embark on. He also paid tribute to the black, favela-originating women who worked in Marielle’s cabinet and who – after her assassination – declared that they would not hide in fear but run for public office. They all just won their races two weeks ago, as did one of Marielle’s best friends, elected to the federal Congress.

The country’s leading newspapers headlined this moment – the homage Roger Waters paid to Marielle – and it was a reminder of the power to inspire and find light even in the grimest and darkest times. It was also a personal reminder for me of a lesson that, for so many reasons, is tempting to forget or ignore but should always be embraced. You never know the effects your actions will have on someone: even just a single individual, and the way that can ripple into the world.

I had no idea when I was writing in obscurity for a tiny audience on my personal blog 12 years ago and then at Salon that a young kid named Edward Snowden would be reading it and forming his thoughts about the world in part by interacting with it. I never thought that my highly personal and painful reflection on Marielle would touch someone across the world who has a uniquely powerful artistic platform – who had never previously heard of Marielle – and would be in Brazil at exactly the moment the country most needs the energy and humanity he brings. With Mônica Benício after her appearance with Roger Waters

I know for certain that Mônica Benício, growing up in the sprawling slum of Maré and overcoming every conceivable obstacle to fulfill her dream of becoming an architect, with a dissertation on how the physical structures of Rio’s favelas are both psychologically and politically repressive – never imagined that she would be forced into a political spotlight as a crusader and activist, and become a crucial symbol of defiant strength and courage at a time when millions of people were reeling in fear and hopelessness after the assassination of her wife. And I strongly doubt that Marielle – as she was growing up in Maré, as she became a single mother at the age of 19, as she confronted the most powerful, violent and corrupt factions in Brazil, as she took buses two hours across across Rio to try to provide aid to families whose innocent children were killed by police officers and to the grieving mothers of police officers killed by violent gangs, and even as she was elected to Rio de Janeiro’s City Council in 2016 with a shockingly huge vote total – ever contemplated that she would become a worldwide icon and an inspiration to so many people to embrace courage and dissent on behalf of those most marginalized and powerless rather than capitulate to fear and intimidation.

Powerful factions, as part of their intimidation tactics, deliberately try to breed a sense of collective and personal impotence: you’re too small and powerless, and they’re too fortified and entrenched, for you to meaningfully challenge them. But human beings, all of us, have the power to move the world even a little tiny bit at a time. And the more that happens, the more the world moves in the direction it’s pushed.

We’re trained to think only grandiose, revolutionary overhauls have meaning. But tiny, isolated actions also matter – convincing a single person to change how they think or behave, helping or saving a single life, being an anonymous, unrecognized part of any campaign or movement. It matters on its own because of its inherent worth, and because of its cumulative effect. But so often your actions can reverberate in ways you would never expect. Impotence and hopelessness are a tactic, a lie told by those who wield power, to foster resignation, passivity, and acceptance.