In other states, progressive ballot initiatives on issues like criminal justice reform and a nurse-to-patient ratio flopped. 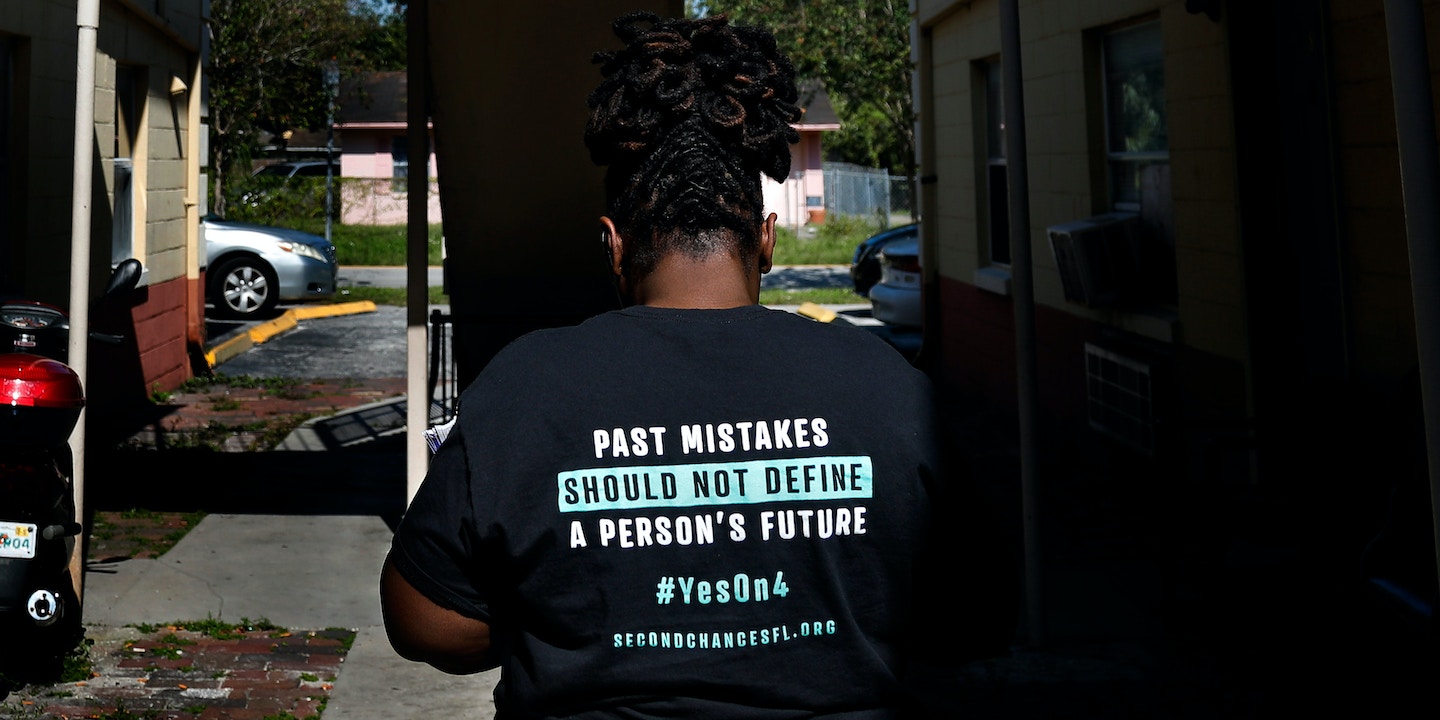 From state legislative races to the House of Representatives, progressive candidates made a dent in the 2018 election season, and will be relatively well-represented in federal and state-level governments next year. But it’s not just elected office: Left-wing activists also made their voices heard through ballot initiatives across the country. On Tuesday night, progressives walked away with some wins and some losses on that front.

They made gains for Medicaid expansion, public education, and voting rights. But they lost other battles, like on criminal justice reform, nurse-to-patient ratios, and universal home care. What follows is an incomplete list of the results of noteworthy progressive ballot measures.

Volunteers from around Idaho gather on the steps of the Idaho Capital Building after gathering over 70,000 voter signatures petitioning for an initiative for Medicaid expansion be placed on the November election ballot.

Idaho voters passed a ballot measure Tuesday night to expand Medicaid, meaning that 62,000 low-income and mentally ill Idahoans will now have access to health insurance. Medicaid expansion is also expected to stabilize many of the state’s rural hospitals that have been struggling financially.

Idaho was one of 17 remaining states to not take the Affordable Care Act Medicaid expansion, and state lawmakers had been killing efforts to expand it through the legislature for several years. The Urban Institute estimated that Idaho would be forfeiting $3.3 billion in federal funds over 10 years by not expanding the program. Frustrated with the lack of progress, a grassroots movement organizing under the banner Reclaim Idaho rallied to put the measure on the ballot.

Arizona voters defeated an expansion of private school vouchers, casting their ballot against legislation signed by Republican Gov. Doug Ducey in 2017. The ballot measure — put forth by a grassroots coalition opposed to the legislation — was poorly worded, made especially confusing by the fact that the legislation refers to vouchers as innocuous-sounding “Empowerment Scholarship Accounts.” Still, opponents were able to convince voters that the voucher-like subsidies would drain needed resources from already underfunded public schools, as the state has already cut $4.56 billion from its education budget since 2009.

The majority of money currently being spent on the state’s school voucher program has gone to fund students who would otherwise attend wealthy and high-performing school districts, according to three separate investigations by the Arizona Republic over the last three years. Opponents of Prop 305 argued that the voucher-like programs subsidize the rich and hurt poorer schools.

In what would have been the first for the nation, Maine voters instead rejected a proposal to establish a universal home care program for seniors and people living with disabilities. The measure would have provided long-term care to adults 65 years and older in their homes at no cost to the individuals and their families. It would have been funded by a new tax on high-earners. Maine has the oldest population in the country, and the waiting list to receive home care services stretches into the thousands. The number of Maine residents over the age of 65 is expected to double by 2030. Question 1 would have addressed both the shortage of home health care services and improved job quality for home care workers.

The measure was opposed by the state Republican Party, as well as national and state business interests. It was supported by senior citizens, unions, veteran groups, and the National Domestic Workers Alliance. (The measure was also supported in part by the Omidyar Network, a philanthropic investment firm created by Pierre and Pam Omidyar, who fund The Intercept.)

Thanks to a ballot measure that voters approved last night, Louisiana joins 48 other states in requiring a unanimous jury vote to convict someone with a felony. (Unanimous jury decisions are constitutionally required for federal convictions, but states can choose whether to enact this protection in their jurisdictions.)  In Louisiana, an individual could be found guilty with just 10 of 12 jurors — or 83 percent — voting for conviction. Advocates have long argued that this is discriminatory, pointing to the law’s blatant Jim Crow roots. Non-unanimous juries not only weaken the power of black jurors, but they also heighten the risk of a wrongful conviction. (The only remaining state to have non-unanimous jury decisions is Oregon, though Oregon requires a unanimous vote for a murder conviction.)

Criminal justice reform in Louisiana has bipartisan support, and Amendment 2 was supported by the state’s Democratic and Republican parties, as well as a host of organizations like the American Civil Liberties Union, the Anti-Defamation League, the Koch-backed Americans for Prosperity, and the Urban League of Louisiana. Demonstrators rally outside the Michigan Hall of Justice in Lansing, Mich., on July 18, 2018, where the state’s Supreme Court heard arguments about whether voters should be able to pass a constitutional amendment to change how the state’s voting maps are drawn.

Michigan is one of the most heavily gerrymandered states in the country, and Republicans have commanded nine of the state’s 14 congressional seats in every election since 2010, despite Democrats earning far more votes statewide some years. Republicans denied manipulating voting maps, but emails released this summer as part of a federal court challenge revealed that GOP operatives intentionally drew the maps in their favor.

Proposal 2 was led by Katie Fahey, a recycling program coordinator from Grand Rapids who, in the days after Donald Trump’s 2016 victory, sought a cause that could unite her loved ones across the political spectrum. She launched Voters Not Politicians and spent the next year working with volunteers to canvass the state in support of signatures. The measure was challenged by well-heeled opponents, like the Michigan Chamber of Commerce, and it survived a near-death blow at the state Supreme Court in July. Voter in Michigan said yes to fair election maps, just in time for 2020 redistricting.

Florida voters approved Amendment 4, a monumental ballot initiative that amends the state’s constitution to restore the right to vote to an estimated 1.5 million Floridians. Florida’s history of disenfranchising citizens with felony convictions dates back to Reconstruction, when states, especially Southern states, began searching for ways to undermine the new civil rights afforded to African-Americans, like universal male suffrage required by the 15th Amendment. In 1868, Florida enacted a new constitutional provision to indefinitely ban formerly incarcerated people from voting, and 200 years later, 1 in 10 eligible Florida voters have been effectively barred from casting a ballot. The ban has disproportionately impacted black voters; more than 20 percent of otherwise eligible African-Americans have been barred from the voting box.

Amendment 4 required 60 percent approval to pass and sailed to victory with more than 63 percent. The grassroots push for a constitutional amendment came after several unsuccessful efforts to change the law through litigation and was led by Desmond Meade, an ex-offender who completed a 15-year prison sentence for a felony. Amendment 4 excludes those who have committed murder or a sex offense — carveouts that supporters felt were necessary for its political passage.

In Massachusetts, voters weighed in on a ballot initiative to limit the number of patients who can be assigned to a single bedside nurse at one time. Nurses in the state — as well as across the country — have long advocated for such nurse-staffing ratios, saying that they can’t do their jobs safely or effectively when they have too many patients to manage at once. The only other state to have a nurse-staffing limit is California, which has been on the books since 1999 and in effect since 2004. The hospital industry bitterly fought California’s law then and has successfully thwarted other attempts since.

On Tuesday night, the hospital industry won again, with Massachusetts voters rejecting the measure. Despite research showing that California’s nurse-staffing limits improved care and contributed to a significant drop in mortality, the hospital industry mounted an aggressive opposition campaign, blasting ads around the state suggesting that Question 1 would lead to a spike in health care costs, reduced health care services, and even hospital closures. Opponents also insisted that taxes could dramatically go up, using cost estimates that assumed huge amounts of wage inflation despite Massachusetts having no nursing shortage. By the end, even many nurses opposed Question 1, with some saying they felt great pressure from their employers to vote no.

In a major loss for criminal justice reformers, more than 60 percent of Ohio voters rejected a measure to reduce drug penalties and send fewer people to prison. Issue 1 would have allowed individuals caught with illegal drugs to face a misdemeanor charge, which is punishable by up to six months in county jail, rather than a felony charge, which could lead to prison time. One out of every 25 adult Ohio residents are currently under correctional supervision, and over a third of people return to prison within three years of being released.

Issue 1, which was supported by a host of progressive organizations and the powerful Chan Zuckerberg advocacy group, would have allowed prisoners to reduce their sentences by up to 25 percent, through taking advantage of educational, work, or rehabilitative opportunities while incarcerated. Money saved by reducing the prison population will be redirected toward funding drug treatment programs and trauma care for crime survivors.