Amazon’s new headquarters will bring it at least $4.6 billion in state and local subsidies, according to an analysis by Good Jobs First. 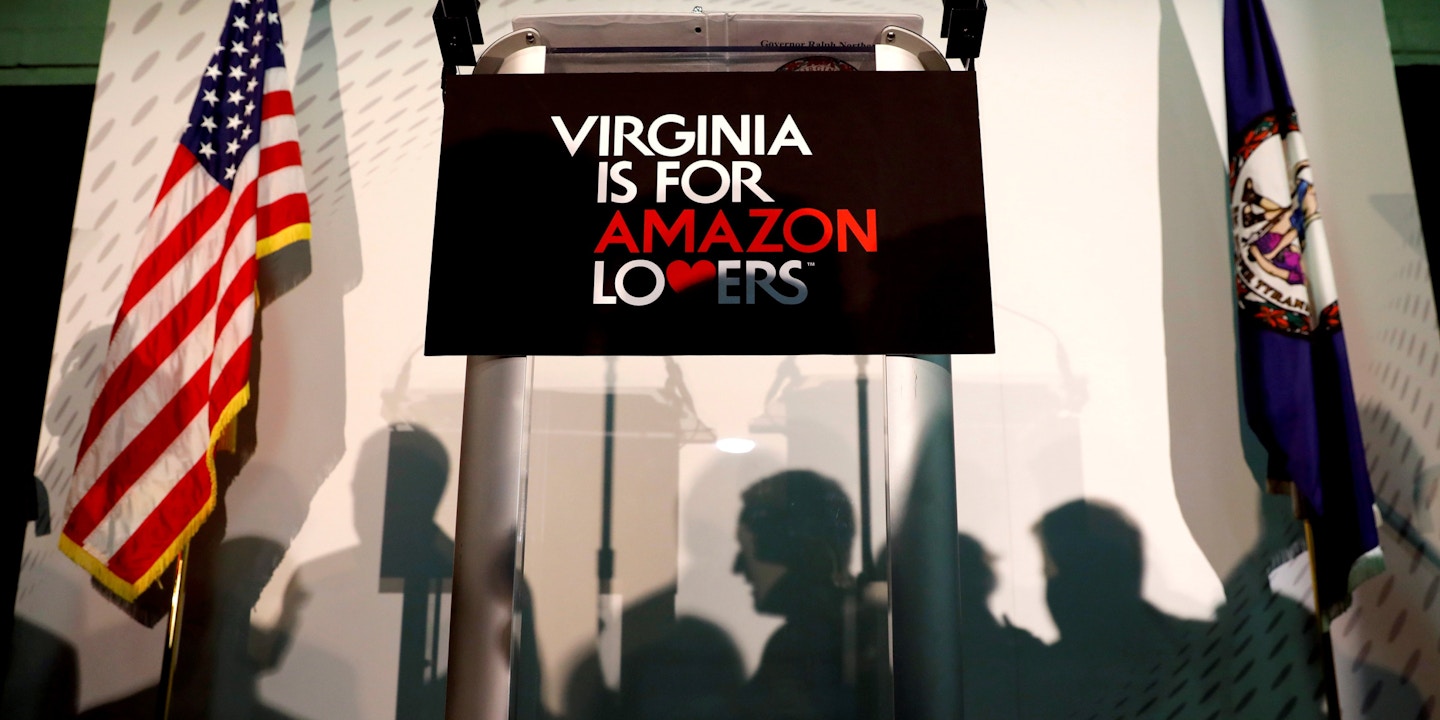 Amazon’s announcement this week that it will open its new headquarters in New York City and northern Virginia came with the mind-boggling revelation that the corporate giant will rake in $2.1 billion in local government subsidies. But an analysis by the nation’s leading tracker of corporate subsidies finds that the government handouts will actually amount to at least $4.6 billion.

But even that figure, which accounts for state and local perks, doesn’t take into account a gift that Amazon will also enjoy from the federal government, a testament to the old adage that in Washington, bad ideas never die.

The Amazon location in Long Island City, in the New York City borough of Queens, is situated in a federal opportunity zone, a Jack Kemp-era concept resurrected in the 2017 tax law that, in theory, is supposed to bring money into poverty-stricken areas. The northern Virginia site, in the Arlington neighborhood of Crystal City (which developers and local officials have rebranded as “National Landing”), is not directly in an opportunity zone but is virtually surrounded by other geographic areas that are.

Under the tax overhaul signed by President Donald Trump last year, investors in opportunity zones can defer payments of capital gains taxes until 2026, and if they hold them for seven years, they can exclude 15 percent of the gains from taxation. If investors carry the opportunity zone investment for 10 years, they eliminate taxes on future appreciation entirely. Investment managers have been salivating at the chance to take advantage of opportunity zones. Special funds have been built to cater to people holding unrealized capital gains — such as Amazon employees with large holdings of company stock.

Not only could Amazon benefit from the opportunity zone directly in Long Island City, but Virginia employees with unrealized capital gains will have an escape valve next door to an Amazon campus. “People who happen to be sitting around with long-term capital gains may now have vehicles for hiding them,” said Greg LeRoy of Good Jobs First, a nonprofit that scrutinizes economic development incentive deals between cities and companies, and has analyzed the Amazon deal.

Amazon did not respond to a request for comment on the opportunity zone or the Good Jobs First estimate of the subsidies it could receive.

Supporters claim opportunity zones spur renewal and revitalization in impoverished areas. It’s a decades-old bipartisan fantasy that sits uncomfortably at odds with the demonstrated results. Researchers who have studied opportunity zones find that these tax schemes rarely ever help cities, and often financially cripple them.

“At best, they divert investment from one part of the city from another, resulting in no net gain for the city as a whole,” wrote Timothy Weaver, an urban policy and politics professor at the University of Albany, last year. “At worst, they result in tax-giveaways to firms that would have been operating anyway, thereby generating a net loss to city revenues.”

Still, Republicans and Democrats are loathe to give up on what they continually tell themselves can be a win-win for everyone, if we just try really hard. And now a major beneficiary of this federal largesse happens to be one of the world’s richest companies, led by the world’s richest man. A view toward Gantry State Park in the Long Island City section of the Queens Borough in New York on Nov. 13, 2018.

According to Good Jobs First’s calculations, Amazon will get $4.6 billion in state and local subsidies for its new headquarters — and that’s not counting the opportunity zone benefit.

Amazon’s press release cited two New York state incentives, a $1.2 billion grant over the next decade from the Excelsior Program and a $325 million, 10-year grant from Empire State Development. But Amazon did not quantify proceeds from two other city incentives, the Industrial & Commercial Abatement Program, or ICAP, and the Relocation and Employment Assistance Program, or REAP.

ICAP gives a partial tax abatement for 25 years, and based on the expected $3.6 billion campus in Long Island City, Good Jobs First estimates that value at $386 million. REAP, a per-employee tax credit of $3,000 per year for 12 years, comes out to $897 million if Amazon meets its projection of hiring 25,000 employees.

LeRoy, of Good Jobs First, noted that ICAP and REAP are available to most businesses relocating into New York, but a single entity’s ability to combine all their benefits distorts the purpose of attracting economic development. “I don’t think the original sponsors ever envisioned individual transactions costing 10 figures,” he said. “There’s a strong argument for capping programs on a per-deal basis.”

LeRoy added that this is not a full accounting of the benefits out of New York. Amazon will benefit from a payment in lieu of taxes, or PILOT, in which a portion of the company’s property taxes will flow directly into enhancements for the project area. Plus, there’s the federal opportunity zone.

That Long Island City is a designated opportunity zone Amazon might exploit is especially mind-boggling given that the fast-gentrifying area has had no trouble attracting new investment, has a 10 percent poverty rate (half that of New York City), and has a median income of $130,000 per year.

While the overwhelming majority of opportunity zones are defined by having high poverty rates, about 200 of the 8,700 Treasury Department-approved census tracts are like Long Island City, economically prosperous but adjacent to poverty. This includes neighborhoods in well-off cities like Los Angeles, San Jose, Seattle, and Portland. Treasury Secretary Steven Mnuchin said last month that he expects the opportunity zones to attract $100 billion in investments. Amazon’s estimate for Virginia — $573 million in cash grants — also leaves out a huge benefit for Amazon. “They’re planning a big Virginia Tech campus in Alexandria, adjacent to the site,” LeRoy said. “It’s a public university, the money is coming from taxpayers.” In a press release, Virginia Tech puts the cost of the campus at $1 billion and added that Amazon “credited the Innovation Campus in Alexandria as a key component in its decision to locate in Northern Virginia.”

Good Jobs First added that a redevelopment subsidy known as tax increment financing for on-site infrastructure and green space in the area could also benefit Amazon at the northern Virginia site. There was no cost estimate provided for this, though the Amazon press release mentions $195 million in commonwealth-funded infrastructure projects in the neighborhood, and another $28 million in funding from the city of Arlington.

The total amount of subsidies in northern Virginia, according to Good Jobs First, is at least $1.8 billion, almost as much as Amazon said it would be reaping in government subsidies overall.

Previously, Amazon has reaped $1.6 billion in state and local subsidies for its warehouses and data centers elsewhere across the country. On the same day as the New York and Virginia announcements, Amazon also announced a new “Operations Center of Excellence” in Nashville, Tennessee, a 5,000-worker facility for which the city gave Amazon $102 million in subsidies. Nashville was one of the top 20 finalists for the HQ2 auction, and parts of the city are also opportunity zones.

The cash handouts also do not take into account regulatory leniency and accelerated permitting that characterizes the Amazon projects. “There is a strain of thought that says if you give a company prompt variances, because time is money, companies would value that more than property tax abatement,” said LeRoy. In this case, the cities are offering both!”

The deals do not appear to include guard rails for what is expected to be rapid gentrification in the locations. Condo sellers in Crystal City took note of overnight price hikes of as much as $20,000 the day after the announcement. As gentrification likely pushes out residents in the opportunity zones surrounding the northern Virginia site, Amazon employees who buy real estate could not only find a place to live, but also avoid unrealized capital gains taxes.

Progressive politicians like Rep.-elect Alexandria Ocasio-Cortez, D-N.Y., and conservative commentators have joined forces to question the deal. Community organizations held a rally in New York on Wednesday, urging a re-channeling of the taxpayer subsidies. Following Amazon’s announcement, Ron Kim, a Queens assembly member, introduced new legislation to redirect taxpayer funds designated for corporate subsidies to canceling or buying student debt. Virginia delegate Lee Carter, a democratic socialist, also criticized the deal for its exorbitant tax giveaways and the lack of transparency under which the terms were negotiated, calling it “comic book villain stuff.”

If Amazon fails to live up to their end of the agreement, they can just cancel it with 5 days notice, and keep the money.

If Virginia's elected government fails to live up to its end of the agreement at any time between now and 2043, no cancelation and AMZN still keeps the money pic.twitter.com/kyCH6FEXkI

Here we have language that mandates the next 6 governors to deliver LEGISLATIVE action, or else Amazon is released from their end of the contract. But they could still sue us for the rest of the payments even after they're released.

One of the worst contracts I've ever read. pic.twitter.com/hm2tG6MmVh

Carter will have the opportunity to weigh in on the deal. According to the contract language, the grant payments to Amazon are subject to appropriations by the Virginia General Assembly, though the governor is obligated to put the payments in the draft budget request.