Two decades after a terrible war, Bosnia is confronted with a new generation of nationalist Serbs who want to change the country’s borders. 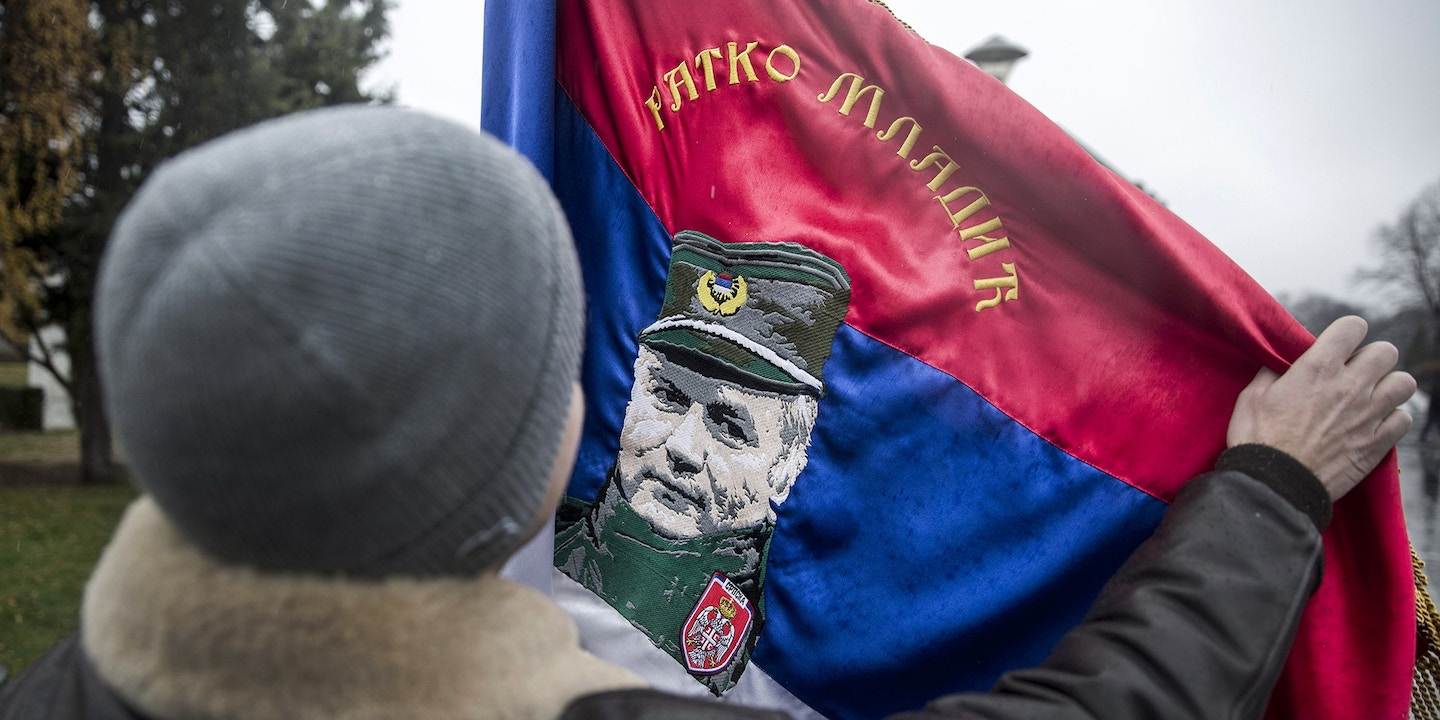 In a century that produced its share of ghastly war criminals, Ratko Mladic stands alongside the worst. As military commander of the Bosnian Serbs during the Bosnian war of the 1990s, Mladic helped orchestrate the largest mass killings in Europe since the Holocaust, including a notorious massacre of 8,000 men and boys in the eastern town of Srebrenica. In 2017, Mladic was sentenced to life in prison on charges of genocide by the International Criminal Tribunal for the former Yugoslavia — a rare case of a high-ranking war criminal being made to face justice in a court of law.

Though reviled internationally, for some in his own country Mladic remains a symbol of repressed nationalist dreams. Passing through the dreary suburb of Lukavica, located in the hills directly south of Sarajevo — the capital city that Mladic’s forces terrorized for nearly four years — I recently saw posters and graffiti lionizing the general plastered on the walls of many buildings. At a traffic on-ramp, an image of Mladic was depicted in blood-red spray paint, giving a military salute under the letters “VRS,” the acronym for the Bosnian Serb military forces. Like statues honoring Confederate generals in the United States, many of which were actually built long after America’s Civil War, a monument to Mladic was recently erected in his hometown, an homage to a man that many still consider a hero.

The forces of politically driven hatred that tore Bosnia apart two decades ago were never dismantled as much as held dormant by the 1995 peace deal brokered by the United States in talks at a military base in Dayton, Ohio. Today, pressures that threaten to unravel the tenuous peace are once again rising. The Dayton accords divided Bosnia between a Muslim-Croat federation and an autonomous Bosnian-Serb territory known as Republika Srpska. Though criticized by some for effectively rewarding the wartime ethnic cleansing carried out by Bosnian Serb leaders, this ethnic division of the country has nonetheless helped keep a measure of peace over the past two decades. In recent months, however, the leaders of Republika Srpska have raised the specter of declaring independence from the rest of Bosnia, a move that would rip apart the fragile postwar order. Ongoing talks about a possible land swap between Serbia and Kosovo have been invoked by a new generation of Bosnian Serb extremists as a precedent for redrawing their borders, too — a move that would almost guarantee a return to conflict. 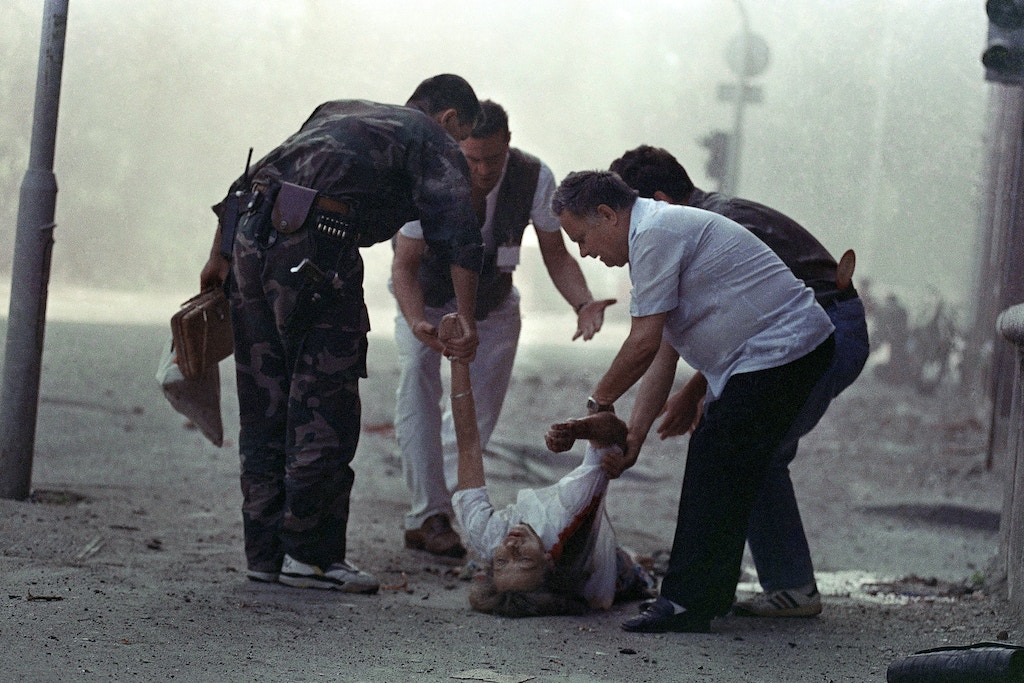 Bosnian militiamen and civilians carry a victim of a mortar attack in Sarajevo on Aug. 21, 1992. Three mortar shells slammed into Sarajevo’s main boulevard as residents emerged after a night of shelling to search for bread and water.

“A multicultural Bosnia was a compromise that Republika Srpska’s leaders had been forced to accept by international pressure, at a time when they had been openly pursuing genocide and ethnic cleansing. In truth, they’ve never really accepted it,” Emir Suljagic, a survivor of the Srebrenica massacre who later served as deputy defense minister of Bosnia, told me recently at a cafe in Sarajevo. “In the Balkans, any call for redrawing borders or declaring statehood is a signal for violence, and everyone knows it. Ordinary people may not be ready for war, but their leaders are banging the drums nonetheless.”

Indeed, the resurgence of right-wing nationalism in Europe has turned Bosnia’s war into an object of lurid nostalgia — a model for the future, even.

“The Serbian nationalist cause in the 1990s was a hobby horse for the far right in Europe. In their view, Bosnia was an avatar for the types of political developments that they wanted to see happening in the continent,” said Jasmin Mujanovic, a political scientist focused on the region who wrote the recent book “Hunger and Fury: The Crisis of Democracy in the Balkans.” “After the Cold War, the next great ideological struggle for the far right was going to be about the question of the nation and identity. The idea of having a genocidal ethnic war like that which occurred in Bosnia — to use their own language, a ‘race war’ — was the whole point. As a result, they continue to sympathize with the people who advocated, perpetrated, and continue to defend that genocide.” People wave flags during a speech by Milorad Dodik, President of Republika Srpska, after a referendum in Pale, Bosnia, on Sept. 25, 2016.

Today much of that sympathy lies with the figure of Milorad Dodik, the demagogic politician elected this October as the Bosnian Serb representative on the country’s tripartite presidency. Once seen in the West as a relative moderate, in recent years Dodik has emerged as a fiery ethnonationalist, secessionist, and genocide denier. Among other provocations in a country still struggling to heal from the wounds of a war that killed over 100,000 people, Dodik has disputed that a genocide of Bosnian Muslims took place in Srebrenica, claiming many of the victims of the massacre were “still alive.” Dodik has also publicly honored individuals convicted by The Hague for their roles in war crimes, including Mladic and former Bosnian Serb political leader Radovan Karadzic.

Outside of the country, the war remains a potent symbol for those on the right-wing terrorist fringe, many of whom who have lionized wartime Bosnian Serb leaders for pursuing the politics of ethnic cleansing and genocide. In his notorious political manifesto, Norwegian terrorist Anders Breivik revealed himself to be obsessed with the wars in the Balkans. Breivik heaped praises on Karadzic and openly defended the genocide, depicting it as model for a future race war in Europe. In the clandestine right-wing circles in which he traveled, Breivik also proudly claimed to have met individuals living in hiding who had committed atrocities against Muslims during the war. 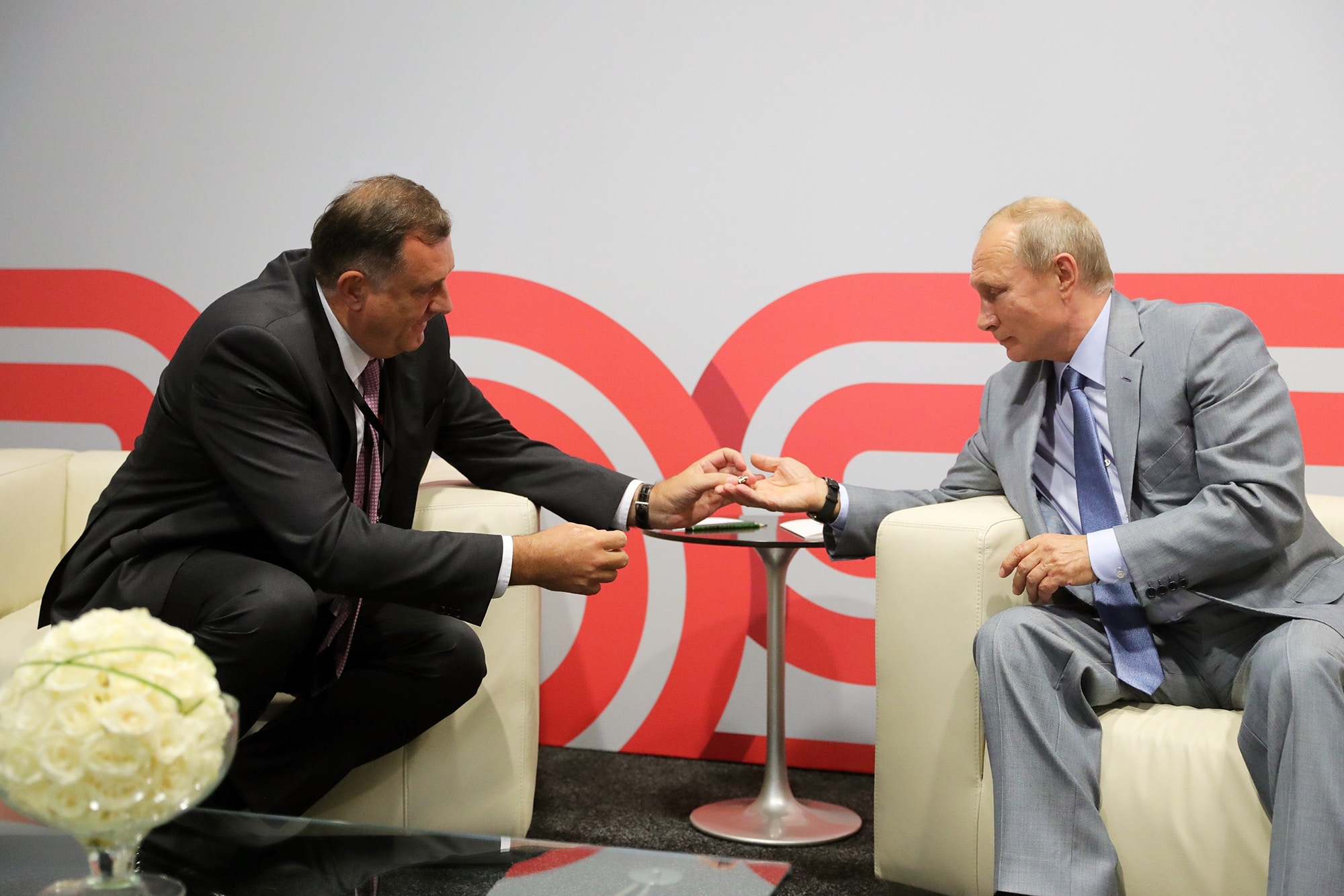 Russian President Vladimir Putin and President of the Republika Srpska Milorad Dodik during their meeting at Sochi Autodrom in Sochi, Russia on Sept. 30, 2018.

Last year the United States placed sanctions on Dodik for his role in obstructing the terms of the Dayton accords that ended the conflict. But those sanctions have not stopped individuals tied to the emerging international far right — including people associated with President Donald Trump’s administration and European ethnonationalist parties — from treating Dodik’s party as an ally in their envisioned global right-wing alliance. This summer, former Trump strategist Steve Bannon hosted the president of Republika Srpska, Zeljka Cvijanovic, at his Washington, D.C., home, while other Trump campaign associates have surfaced as lobbyists for Dodik’s government.

As part of a broader program of support for illiberal forces in Europe, Russian President Vladimir Putin has also emerged as a patron of Dodik. With Russian assistance, the police forces of Republika Srpska have undertaken an ominous program of militarization, with weapons and training provided by Russian advisers. Russian-owned state media outlets have also been accused of spreading sectarian propaganda in the country, adding to a febrile climate of ethnic tension and atrocity denial that Dodik has been glad to capitalize on.

“It has been a huge achievement of Bosnian society that since the end of the war, there have been almost no reprisal attacks or incidents of ethnic violence in the country, even in localities where people have returned to live near those who had been involved in killing their own family members,” says Adnan Cerimagic, an analyst at the European Stability Initiative, a Berlin-based think tank. “As such, it’s very irresponsible for political figures or state media outlets to create nationalist myths around people who have been indicted for war crimes by The Hague or by Bosnian courts, or to deny well-documented atrocities. It’s dangerous for the future of Bosnian society and undermines efforts to build an open and liberal society here, in which past actions are put into their proper context.” A Bosnian woman arrives to pray beside a gravestone at the Srebrenica Genocide Memorial on Nov. 21, 2017.

In any country, let alone one still recovering from a hideous war that saw concentration camps and genocide return to the heart of Europe, the consequences of deliberately fomenting ethnic hate can be devastating. In his book on the postwar hunt for Balkan war criminals, “The Butcher’s Trail,” journalist Julian Borger noted that the violence that tore apart Yugoslavia during the 1990s was never the result of atavistic ancient hatreds supposedly nursed by Serbs, Croats, or Muslims. Instead, the poison had been purposely spread by political leaders, some radical and some merely opportunistic, who had egged their people on toward conflict.

“The fact that the killing came to a halt so abruptly, as if a switch had been flicked, also demonstrates the decisive role of political leadership in creating the conditions for the mass murders of the 1990s,” wrote Borger. “The nationalist leaders who assumed power at the breakup of Yugoslavia were not struggling to contain the murderous impulses of their people. On the contrary, they created circumstances for psychopaths and sadists to kill with impunity.”

While the full implications of a rising nationalist far right may still be unclear to some Americans and western Europeans, in Bosnia there is no such ambiguity. Any breakdown in the consensus that has kept the peace over the past few decades would risk taking Bosnians back down the nightmare road of violence that they traveled during the 1990s. In a country where many buildings are still pockmarked by artillery shells and in which parks and neighborhoods are dotted with memorials to the victims of mass killings, the consequences of resurgent fascism need no elaboration.

Important as it is for the millions living there, the survival of Bosnia as a multicultural state might also be a bellwether for the type of world that Europeans, Americans, and others can hope to inhabit in the 21st century. On Sarajevo’s streets, a scarred yet beautiful mixture of Austro-Hungarian, Ottoman, and Communist-era architecture — the terrible consequence of failing to confront ethnic chauvinism in its early stages — is still on display.

“The international community needs to wake up to what is happening in Bosnia,” Suljagic said. “This country is the legacy of a democratic post-Cold War foreign policy. But the stage is being potentially set now for a real tragedy.”