Almost everyone — except Donald Trump — agrees that Mohammed bin Salman was responsible for Jamal Khashoggi’s killing. 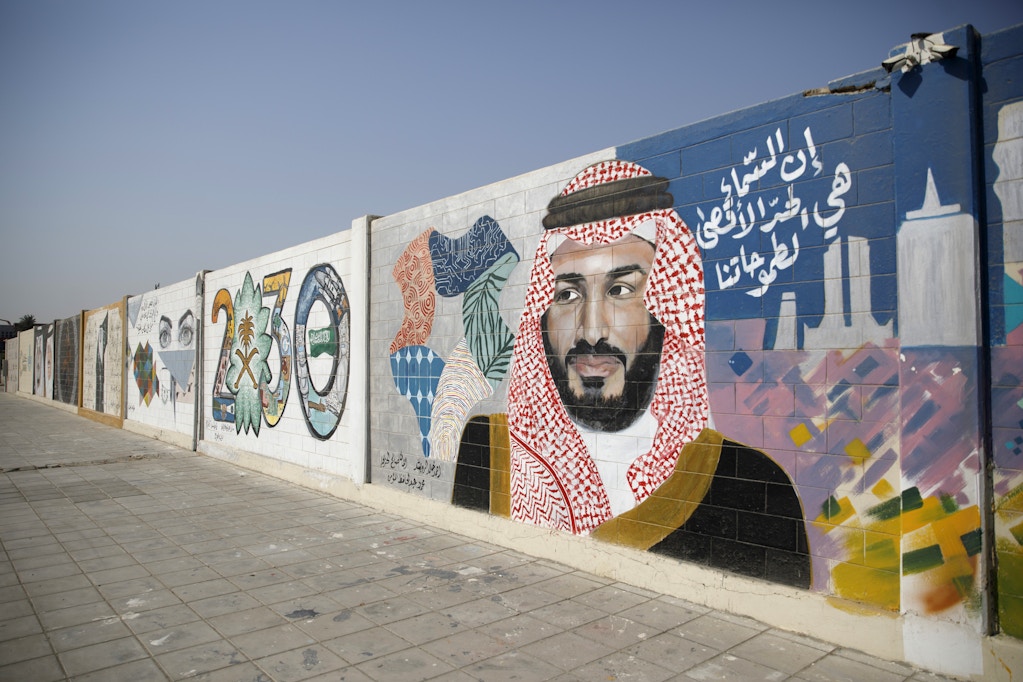 It’s been over a month since Washington Post columnist Jamal Khashoggi disappeared into the Saudi consulate in Istanbul, where he was murdered in what increasingly seems to have been a state-sponsored assassination.

Since Khashoggi’s death, a massive public relations campaign spearheaded by the country’s 33-year-old crown prince, Mohammed bin Salman, commonly known as MBS, came to a crashing halt. Eager to paint himself as an ambitious reformer, MBS instead quickly began developing a new reputation as a tyrant in the making. As the Saudi government scrambled from lie to lie to explain Khashoggi’s disappearance, each lie more implausible than the last, press coverage of MBS in the West has shifted from fawning odes penned by Thomas Friedman to articles comparing the crown prince to despised dictators-in-waiting, like Saif Gaddafi, the son of the late Libyan strongman Moammar Gaddafi, and Syrian President Bashar al-Assad, who ended up taking over for his brutal father, Hafez, before taking violent repression to an unthinkable level.

If it wasn’t already totally destroyed, the idea of MBS as a would-be reformer is having the last nails driven into its coffin. American government officials are becoming more outspoken in fingering the crown prince as a central figure in Khashoggi’s killing. However far-fetched it was to paint one of the world’s most repressive regimes as a forward-looking bastion in the Middle East, the crown prince’s PR campaign had every structural and historical advantage to success in the U.S. But now it’s all come tumbling down — except for in the one case of the man who matters most, President Donald Trump.

While the federal bureaucracy, Congress, and the press are all turning against MBS, Trump has remained characteristically resolute in the face of the facts. On Tuesday, he released a mind-boggling statement, even by his standards, pronouncing his faith in the Saudi crown prince and equivocating on MBS’s involvement in Khashoggi’s killing. “King Salman and Crown Prince Mohammad bin Salman vigorously deny any knowledge of the planning or execution of the murder of Mr. Khashoggi,” Trump said. “Our intelligence agencies continue to assess all information, but it could very well be that the Crown Prince had knowledge of this tragic event – maybe he did and maybe he didn’t!”

The latest hammer blow to MBS’s reputation — contra Trump’s declaration that intelligence agencies are still on the fence — came in the form of a leaked CIA assessment. The assessment, according to a Washington Post report, said the agency believes the crown prince to be directly responsible for ordering Khashoggi’s murder. Then, on Tuesday, an unnamed State Department official told ABC News that there was a consensus in the U.S. government about what happened. “The idea that it goes all the way to the top is blindingly obvious,” the State Department official told the TV network. “There’s overwhelming consensus that the leadership is involved — no one is debating it within the government.”

Since he disappeared into the consulate on October 2, the Saudi government tried every possible excuse it could grasp at to explain Khashoggi’s fate. After initially claiming that the journalist had walked out of the consulate on his own volition, though cameras failed to record it, Saudi officials later concocted an implausible story about a fistfight that broke out in the consulate after the 58-year-old Khashoggi went there to pick up his divorce papers. Then the government said that it was indeed a premeditated killing, but carried out by a rogue faction of Saudi security officials.

The only consistency in these Saudi stories has been the attempt to shield MBS from responsibility, despite the mounting evidence against him. The Saudi government recently announced charges against a number of lower-ranking individuals allegedly involved in the killing, in an apparent effort to defuse international outrage. Despite its efforts, the pressure against the crown prince only seems to be building. Undeterred by the recent prosecutions, this week Germany announced that it was suspending weapons sales to the country, as well as placing sanctions on 18 Saudis believed to have been involved in the murder.

Yet there is one party that has been notably hesitant to criticize the Saudis: the Trump administration. Trump emerged quickly as one of the most vocal public defenders of the kingdom in the face of the backlash over the killing. The leaked CIA assessment also shows that Trump is, once again, not on the same page with his own intelligence agencies. Moreover, the political establishment is lining up against MBS.

There are serious signs of anger in D.C. that the president may not be ultimately able to control — even among right-wing Republicans who usually favor a hawkish, Saudi-aligned foreign policy. In remarks that were sure to alarm Riyadh, Sen. Lindsay Graham, R-S.C., went on “Meet the Press” last weekend and publicly described the crown prince as “irrational” and “unhinged,” while stating that it was impossible to believe that he was not involved in Khashoggi’s killing. Sen. Marco Rubio, R-Fla., has also emerged as a harsh critic of the crown prince.

Whatever ultimately comes of this pressure, the crown prince’s efforts to rebrand himself as a reformer seem to have run aground, likely permanently. Over the past year, MBS made it a focus of his “Vision 2030” reform plan for Saudi Arabia to build close ties with America’s elites, including political leaders, Silicon Valley executives, and major media outlets. Under his guidance, Saudi Arabia also ramped up its lobbying and advocacy efforts, helping found a think tank to promote its interests and enlisting a number of prominent former U.S. officials to work on its behalf.

In a sign of how toxic the kingdom has recently become despite MBS’s largesse, dozens of companies and top-ranking officials pulled out of an international investment conference in Riyadh last month that had been billed as a major event in the kingdom. While Mark Zuckerberg, Jeff Bezos, and others were happy to be seen glad-handing the prince in photo-ops during his visit to the United States earlier this year, it’s unclear whether they’d want to repeat the same exercise with a world leader now known in whispers as “Mister Bone Saw.”

It’s worth remembering that whatever bright vision of the future that MBS was selling to American elites flew in the face of his actual actions from the beginning of his rule. Under MBS’s guidance, Saudi Arabia escalated a devastating civil war in Yemen and helped exacerbate what the United Nations has called the biggest humanitarian crisis on the planet. Even while he made symbolic moves to open up the country, such as lifting the ban on women driving, the crown prince engaged in a wave of repression against women’s rights activists, academics, dissident religious clerics, and anyone else who has run afoul of his government.

MBS’s authoritarian style has also been highlighted by the way he has responded to the current backlash. Recent weeks have seen the bizarre spectacle of individuals like Prince Waleed bin Talal, a wealthy Saudi businessman who was one of dozens imprisoned by MBS at the Ritz Carlton hotel in Riyadh, appearing on Fox News to sing praises of the crown prince and defend him from criticism. Khashoggi’s own son also appeared recently with MBS, in a sinister-looking photo-op supposedly intended to help “prove” that Khashoggi’s family did not blame MBS for the murder.

MBS sought to ease the consciences of American liberals while also running an increasingly aggressive dictatorship.

The collapse of MBS’s image results from a basic contradiction in his approach to governing: He sought to ease the consciences of American liberals while also running an increasingly aggressive dictatorship. Under his rule, the Saudi government behaved much like authoritarian regimes in Syria and Russia, bombing civilian populations, as well as murdering and imprisoning dissidents. Unlike the leaders of those countries, however, MBS wanted to be loved, or at least praised, in the West.

After lavishing money and attention on this effort, he seemed to be effectively bribing his way to achieving his goal. But brazenly murdering a Washington Post journalist, an employee of one of the same institutions he had been wooing, was a step too far. While many in the American press had apparently been willing to accept MBS’s protestations that he was a reformer a few months ago, they have been much less willing to accept his lies about the killing of one of their own colleagues. The Washington Post, to its credit, has denounced each new story from the Saudi government seeking to exonerate MBS as a cover-up and demanded genuine accountability in the case — something that Saudi Arabia is essentially unable to provide since it seems to implicate their crown prince.

Following Trump’s statement, it seems likely that MBS is going to stick around for a long time despite his newfound reputation as a volatile tyrant. The crown prince has done much to sideline the competition to his rule and remains a favorite of his father, King Salman. The crown prince he replaced, Muhammad bin Nayef, known by his own acronym of MBN, has been largely silent during the recent crisis, even as MBS continues to remain in the public spotlight in Riyadh.

On November 2, one month from the day that Jamal Khashoggi was killed, World Wrestling Entertainment held its “Crown Jewel” event in Riyadh, which was praised in the Saudi press for “how it embodies the diplomatic power of sport, and highlighting the WWE’s support for Saudi Arabia’s social reforms.” It was an unintentionally fitting description, comparing MBS’s reform program to a “sport” known by even its most ardent fans to be staged. As the kingdom continues to bleed critical Western support under MBS’s guidance, the only question is how much longer the show can go on. Thanks to sometime pro-wrestling guest star Donald Trump, it could be a while.