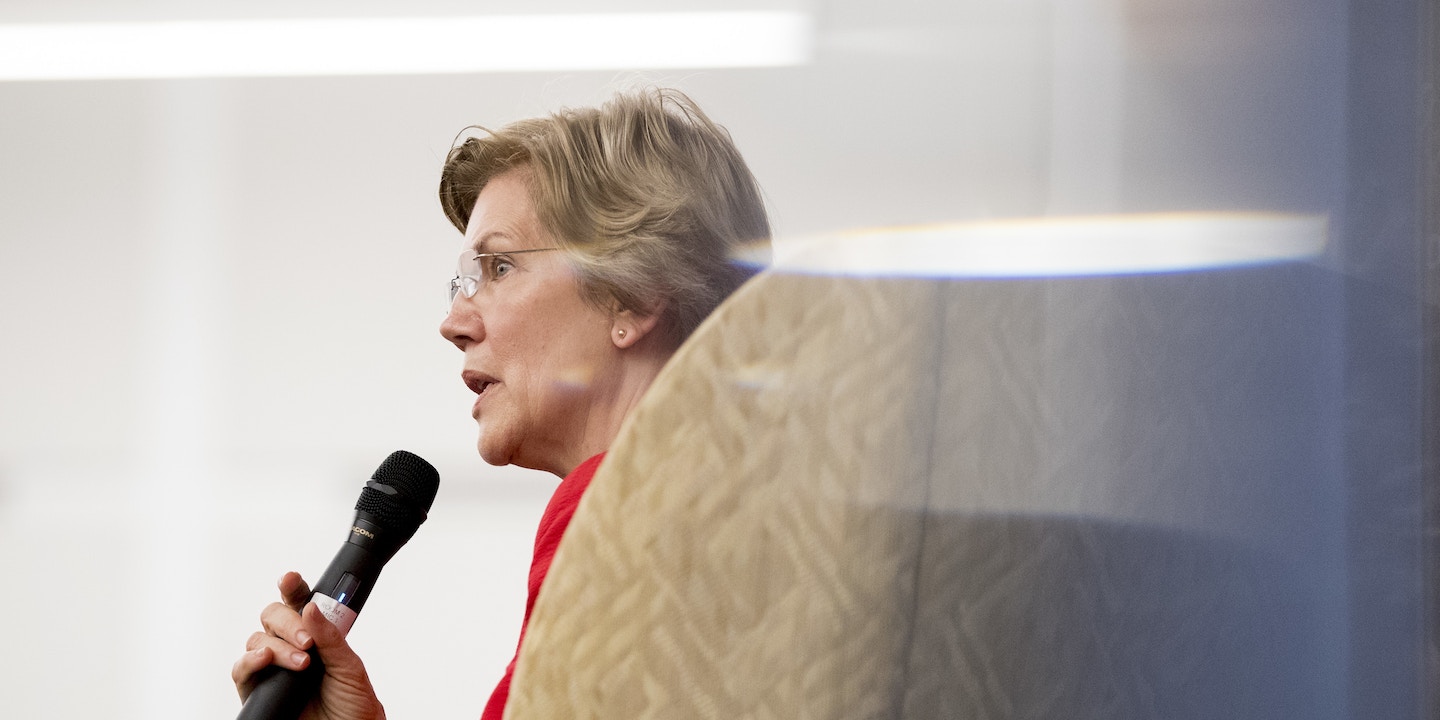 In a 35-minute speech on Thursday, Sen. Elizabeth Warren, D-Mass., laid out a foreign policy vision, linking corruption to the global rise in authoritarianism and calling for U.S. engagement that aggressively fights climate change and corporate power.

Warren, a leading expert on bankruptcy law whose work led to the creation of the Consumer Financial Protection Bureau before being elected senator in 2012, is a favorite of many progressives. In 2016, she joined the Senate Armed Services Committee and last year traveled to Afghanistan — signs to many that she was burnishing her foreign policy credentials in preparation for a presidential run.

Speaking at American University in Washington, D.C., on Thursday, Warren called for the U.S. to take a “sharp knife” to defense spending, invest in diplomacy, and aggressively fight climate change. Pointing out the connections between wealth and political power in authoritarian states like Russia and China, Warren argued that the U.S. should take aim at corruption, internationally and at home.

“From Hungary to Turkey, from the Philippines to Brazil, wealthy elites work together to grow the state’s power while the state works to grow the wealth of those who remain loyal to the leader,” said Warren. “That’s corruption, pure and simple.”

Left-wing politicians have traditionally been criticized for lacking a foreign policy vision or only articulating what they’re against — like costly wars and regime change — rather than what they’re for. Warren’s speech is the latest sign that the progressive wing of the Democratic Party is asserting itself in foreign policy ahead of the 2020 presidential race.

Sen. Bernie Sanders, I-Vt., another presumed 2020 presidential candidate, gave two recent foreign policy addresses — one in 2017 at Westminster College, where Winston Churchill gave his 1946 “Iron Curtain” speech — and one at Johns Hopkins University School for Advanced International Studies in D.C. this past October.

In the latter speech, Sanders, whose critics in 2016 often pointed to his lack of a clear foreign policy agenda, lambasted the global international order for its failure “to deliver on many of its promises,” and outlined a vision of U.S. foreign policy around fighting “kleptocracy” and “oligarchy.”

“We need to understand that the struggle for democracy is bound up with the struggle against kleptocracy and corruption,” said Sanders. “That is true here in the United States, as well as abroad.”

On Thursday, Warren was less willing to criticize the post-World War II international order, claiming that the U.S.-led order was “based on democracy, human rights, and improving economic standards of living for everyone.” Indeed, her choice of venue was meant to recall John F. Kennedy’s famous foreign policy speech delivered at American University. Former President Barack Obama returned to the school in 2015, invoking Kennedy in advocating for his nuclear deal with Iran.

In Warren’s telling, that golden age ended in the 1980s with the Reagan revolution. She glossed over key events of the pre-Reagan era: the entire Vietnam war, and CIA-backed regime change in Iran, Guatemala, Brazil, and Chile, to name a few. “Beginning in the 1980s, Washington’s focus shifted from policies that benefit everyone to policies that benefit a handful of elites, both here at home and around the world,” Warren told the audience.

But Warren also took aim at decades of austerity and free trade policies, arguing that the long history of trade deals like NAFTA have increased the power and wealth of multinational corporations, while inflicting decades of harm to working-class people.

“For decades, the leaders of both parties preached the gospel that free trade was a rising tide that would lift all boats,” Warren said. “Great rhetoric except that the trade deals they negotiated mainly lifted the yachts and threw millions of working Americans overboard to drown.”

Earlier this year, Warren also introduced a far-reaching bill aimed at eliminating corruption in the U.S. Among other things, the bill aims to eliminate financial conflicts of interest for members of Congress and high-ranking government officials and creates a lifetime ban on lobbying for the president, vice president, cabinet officials, and members of Congress.

But the bill would also have far-reaching foreign policy consequences. The bill prohibits lobbyists from accepting money from foreign governments and foreign corporations. The influence of foreign governments in Washington has been in the spotlight recently, with numerous news outlets drawing attention to Saudi Arabia’s extensive lobbying network in the aftermath of Washington Post contributor Jamal Khashoggi’s murder by officials of Saudi Arabia — a key ally with deep influence in Washington.