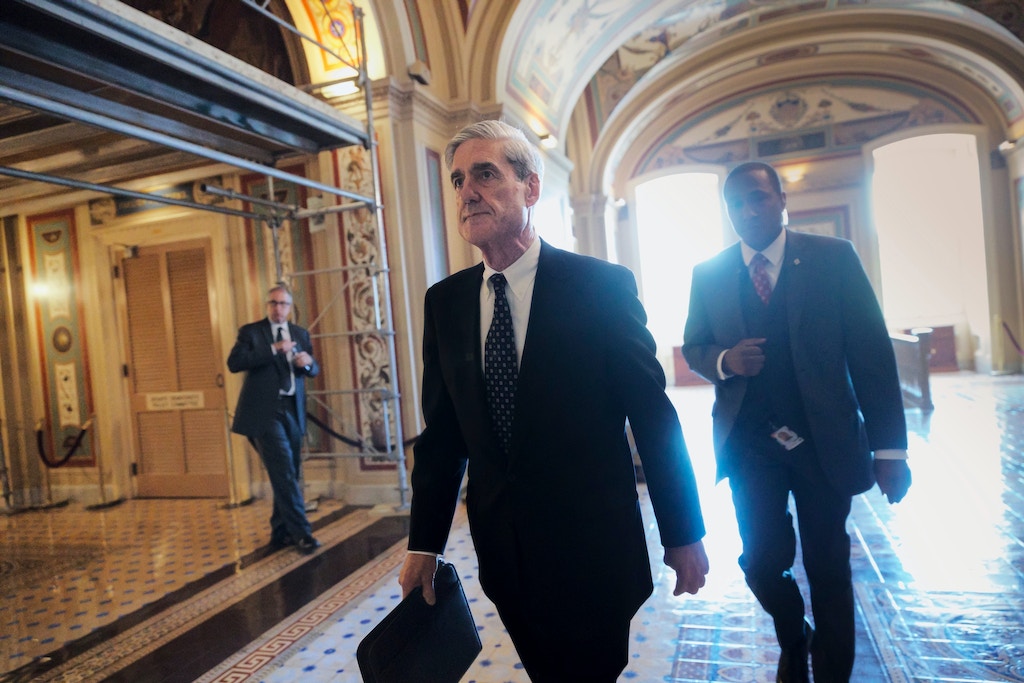 Special Counsel Robert Mueller, center, after a closed-door meeting with members of the Senate Judiciary Committee about Russian meddling in the election and possible connection to the Trump campaign, on June 21, 2017, in Washington, D.C.

Special Counsel Robert Mueller is closing in on Donald Trump, and as one shoe after another drops in the Trump-Russia investigation, the pressure sometimes prompts the president to inadvertently blurt out the truth. Or at least as close to the truth as a serial liar like Trump can get.

On Thursday, Michael Cohen, Trump’s former personal lawyer, pleaded guilty in federal court to lying to Congress about a deal to build a Trump-branded skyscraper in Moscow. Most notably, he admitted that he had misled lawmakers when he told them that discussions about the project had ended by January 2016 when, in fact, the project was still under active consideration by Trump and his business organization just as the Republican Party was about to nominate Trump as its presidential candidate in the summer of 2016.

Cohen said that he lied in order to help Trump avoid the likely political fallout from the disclosure that the candidate was still trying to cut a business deal with people close to Russian President Vladimir Putin just as he clinched the Republican nomination.

Cohen’s latest admissions, including that he talked to Trump about the proposed deal more frequently than he had previously acknowledged and discussed it with others in Trump’s family, are very significant because they shed new light on the relationship between Trump and Russia during the height of the presidential campaign.

Cohen now admits that Trump Moscow was still being considered as late as June 2016, the same month that the infamous Trump Tower meeting occurred in New York. During that meeting, Trump’s oldest son Donald Trump Jr., his son-in-law Jared Kushner, and Paul Manafort, then his campaign chair, met with Russian lawyer Natalia Veselnitskaya and others, including Rob Goldstone, a publicist for Emin Agalarov, a Russian singer and son of Aras Agalarov, a Russian billionaire with close ties to Putin. Aras Agalarov had hosted Trump’s 2013 Miss Universe contest in Moscow at a concert hall he owned; he had also been involved in discussions with Trump about building the skyscraper in Moscow. During the Trump Tower meeting, Veselnitskaya claimed to have derogatory material about Democratic presidential candidate Hillary Clinton.

Faced with Cohen’s admissions in court on Thursday, Trump at first tried to bully his way out of the corner by saying that Cohen was a “weak person and not a very smart person.” But he quickly switched gears and effectively confirmed what Cohen had said. “There was a good chance that I wouldn’t have won, in which case I would have gotten back into the business, and why should I lose lots of opportunities?”

Trump’s comments show the coarse, cynical approach he takes toward public service. But more ominously for him, they also reveal that he had much deeper connections to Russia in the midst of the campaign than he has ever previously acknowledged. It suggests that Trump will lie about his Russian connections until he realizes he can no longer get away with it, and then will quite casually admit that he has been lying all along.

Cohen isn’t Trump’s only problem. In fact, in the weeks since the midterm elections, a series of new disclosures has suggested that the Trump-Russia investigation is intensifying. And one sure sign that the president is worried about Mueller’s probe is the increased frequency with which Trump is now publicly attacking Mueller.

Until Thursday, in fact, it seemed that Trump’s biggest post-election nightmare was Paul Manafort.

On Monday, Mueller’s team said that Manafort has been lying to them in violation of a plea agreement he had reached with the prosecutors. Mueller’s team now wants a federal judge overseeing the case to set a sentencing date for Manafort, at which prosecutors say they will detail “the nature of the defendant’s crimes and lies.” (Manafort has already been convicted of eight counts of bank and tax fraud, so presumably the “crimes and lies” to which Mueller’s team is referring are in addition to those we already know about.)

Mueller’s get-tough approach suggests that he thinks Manafort is still withholding critical information on the relationship between the Trump campaign and Russia. Meanwhile, Manafort’s previous life as a longtime consultant to the pro-Russian leader of the Ukraine, Viktor Yanukovych, and his financial ties to a Russian oligarch, Oleg Deripaska, have raised questions about whether he acted as an intermediary between Moscow and the Trump campaign.

In addition to Cohen and Manafort, the role of the incendiary Roger Stone has come under further scrutiny. There is new evidence, including in a draft court document, that Mueller is continuing to probe whether Stone served as an intermediary in 2016 between WikiLeaks and the Trump campaign. Russian intelligence operatives hacked into the servers of the Democratic National Committee and stole emails that were later released by WikiLeaks and proved highly damaging to Clinton. The Mueller investigation has also raised questions about whether conservative author Jerome Corsi had warned Stone ahead of time that WikiLeaks planned to release materials that would hurt Clinton’s campaign. Corsi said on Monday that he has rejected a plea agreement with Mueller.

To top it off, George Papadopoulos, the onetime Trump campaign foreign policy aide, finally reported to prison this week. He had pleaded guilty last year to lying to the FBI and agreed to cooperate with Mueller in exchange for a very light sentence of just two weeks in prison. He had lied to investigators about his contacts with Joseph Mifsud, a mysterious professor who had told Papadopoulos that the Russians had thousands of emails with derogatory information about Clinton well before their existence was publicly known.

Given all this, it’s fair to say that the thrashing the Republicans took in the midterm elections wasn’t the worst thing that has happened to Donald Trump this month.