How George H.W. Bush Rode a Fake National Security Scandal to the Top of the CIA

The killing of a CIA agent in Greece was used to thwart reforms as Bush became the first openly partisan director of the spy agency in 1976. 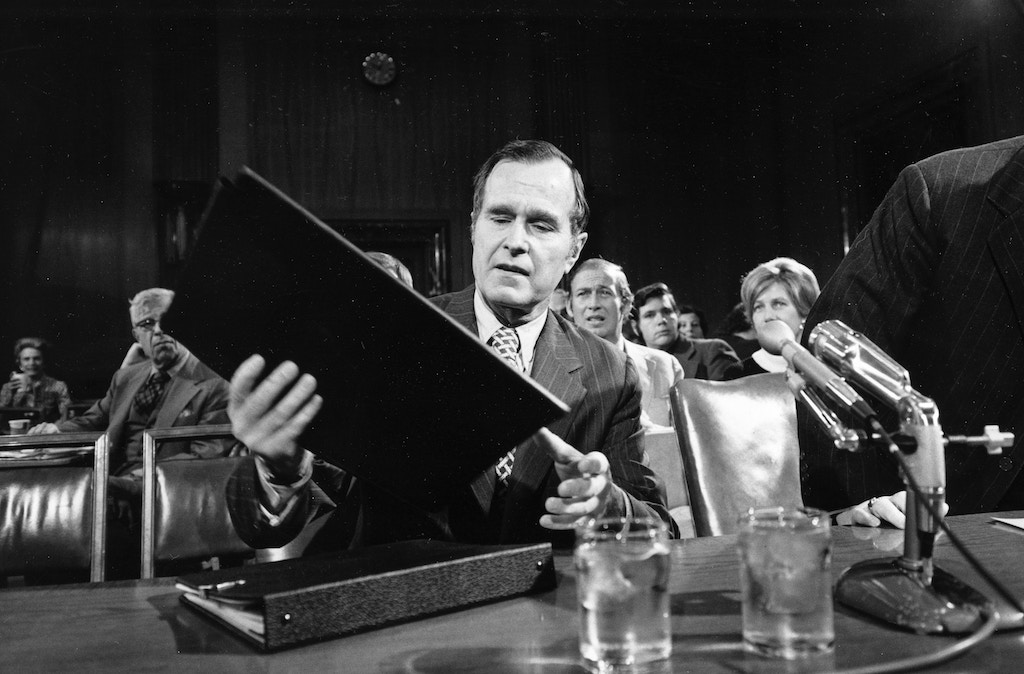 George H.W. Bush looks over his briefing materials prior to delivering testimony before the Senate Armed Services Committee on his qualifications for the job of CIA director, in Washington, D.C., on Dec. 15, 1975.

On December 15, 1975, a Senate committee opened hearings on whether George H.W. Bush should be confirmed as director of the Central Intelligence Agency.

It wasn’t going to be a slam dunk.

The Democrats had a huge majority in the Senate, and many were still angry over Bush’s role as a partisan apologist for former President Richard Nixon, who had resigned the year before as a result of the Watergate scandal. What’s more, in the wake of disclosures in the press of pervasive domestic spying by the CIA, the Senate had launched its first aggressive investigation into alleged abuses by the U.S. intelligence community.

Beginning in January 1975, the Church Committee, named for its chair, Idaho Democratic Sen. Frank Church, unearthed one scandal after another at the CIA, the FBI, and the National Security Agency. Long-hidden covert programs, including a series of plots to kill foreign leaders like Cuba’s Fidel Castro and the Congo’s Patrice Lumumba, had been exposed, rocking the CIA. By late 1975, the agency’s public standing was at a low ebb, and the CIA and White House officials in the administration of President Gerald Ford were increasingly worried about the political impact of the disclosures.

For Bush, the CIA job was a major opportunity at a time when his political career was in flux. Until then, his greatest accomplishment in the Republican Party had been to win a House seat in Texas that had always been held by a Democrat. But he had lost a subsequent Senate bid in 1970 and had been bouncing around Republican establishment circles ever since. He had the ignominy to serve as chair of the Republican National Committee during Watergate, forcing him to make repeated public excuses for Nixon.

Bush had also served as United Nations ambassador under Nixon and as head of the U.S. Liaison Office in China under Ford, and now the Washington rumor mill was reporting that Bush, the loyal soldier, was under consideration for a major political prize — to be Ford’s vice presidential running mate in 1976. If he didn’t get the vice president’s slot in 1976, it seemed likely that he might run for the presidency on his own later.

But first he had to get confirmed to the CIA post.

For the Ford White House and the CIA, Bush’s confirmation hearings set the stage for an all-out battle with congressional leaders. At a critical moment, the Ford administration, its allies in Congress, and the intelligence community collaborated to gin up outrage over a fake national security scandal that ultimately helped pull Bush across the finish line. That polarizing strategy has provided a winning model for Republican efforts to discredit and distract ever since, all the way down to Donald Trump, Devin Nunes, and the attempted sliming of the FBI and special counsel Robert Mueller’s Trump-Russia investigation.

The story of how Bush became CIA director is brilliantly told in “A Season of Inquiry Revisited” by Loch K. Johnson, a renowned historian of intelligence at the University of Georgia and former Church Committee staffer.

To get confirmed, Bush had to run a gauntlet through the Senate, where Democrats held 60 seats thanks to a post-Watergate Democratic landslide in the 1974 midterms. If he got the nod, he would be the first partisan political figure ever to run the CIA. Until then, the agency had been led by gray-flannel establishment figures from Wall Street, former senior military officers, or longtime agency professionals.

Standing directly in Bush’s way was Church, who had emerged as the spokesperson and public face of congressional efforts to probe and reform the intelligence community. Church immediately opposed Bush’s nomination, which he saw as an effort by Ford to install a partisan hack at the CIA who would do the bidding of the White House just as Congress was seeking to curb the agency’s abuses. Church viewed the Bush nomination as a direct White House attack on his committee’s investigation.

“We need a CIA that can resist all the partisan pressures which can be brought to bear by various groups inside and outside the government — especially pressures from the White House itself,” Church said in a speech on the Senate floor. “This is why the appointment of Ambassador George Bush is so ill-advised. It is one thing to choose an individual who may have had political experience, and quite another to choose someone whose principal political role has been that of chairman of the Republican National Committee. There is no need to eliminate from consideration an individual simply because he or she may have held public office. But the line must be drawn somewhere, and a man of Mr. Bush’s prolonged involvement in partisan activities at the highest party level surely passes over that line.”

At his confirmation hearing, Bush did little to allay Church’s concerns. Instead, he warned that “we must not see the CIA dismantled,” an obvious attack on the Senate’s investigative efforts.

As the holidays approached, Bush’s confirmation hung in limbo. Then, on December 23, 1975 — eight days after his confirmation hearing — Richard Welch, the CIA’s station chief in Greece, was returning home from a Christmas party at the U.S. ambassador’s residence in Athens when he was assassinated.

Welch had been a relatively easy target for a local militant group known as 17 November. He had been living in the same house used by several previous CIA station chiefs and had been publicly identified in publications in Greece. The group later claimed that its members had been watching him for months.

But the CIA and the Ford White House quickly saw Welch’s murder as a political windfall. At a time when the CIA was under assault from Congress and Bush’s nomination was in peril in the Senate, there was now a dead CIA hero to mourn.

Ford, waiving restrictions, announced that Welch could be buried at Arlington National Cemetery. The plane carrying his body back home in early January “circled Andrews Air Force Base for three quarters of an hour in order to land live during the Today Show,” according to Johnson’s book.

The CIA and the White House began to exploit Welch’s death to discredit Church and his committee’s work. William Colby, the outgoing CIA director, lashed out at Congress, blaming Welch’s killing on the “sensational and hysterical way the CIA investigations had been handled and trumpeted around the world,” Johnson writes.

The changed climate proved helpful to Bush. On January 27, 1976, South Carolina Sen. Strom Thurmond argued for his confirmation by claiming that the public was more concerned by disclosures that “are tearing down the CIA” than by the “selection of this highly competent man to repair the damage of this over-exposure,” according to Johnson’s book. Later that day, Bush was confirmed by a vote of 64-27.

Bush only lasted a year as CIA director. Ford — who ended up choosing Bob Dole as his running mate — was defeated by Jimmy Carter in the 1976 election. Bush tried to convince Carter to keep him on as CIA director, but Carter’s vice president was Walter Mondale, who had been a leading member of the Church Committee and had already won a commitment from Carter to try to implement many of the committee’s recommendations for reforming the intelligence community.

So Bush ran for president instead. He lost in the primaries to Ronald Reagan, then rode Reagan’s coattails as his running mate in the 1980 election.

Bush’s political career owes much to the misuse of Welch’s murder. Above all, it helped start a Republican tradition of generating fake national security scandals to discredit Democrats and win political battles. In the wake of Bush’s death, many in the mainstream press and political elite have pinned him to a bygone era of civility, when partisanship was held in check out of concern for some greater good. But playing dirty didn’t start yesterday. There is a straight line from Welch to pre-war intelligence on Iraq’s weapons of mass destruction, Benghazi, and Nunes’s farcical midnight search for evidence that Trump was wiretapped.