The EPA’s statements about the meaning of its rollback of the Clean Water Act don’t withstand scrutiny. While Environmental Protection Agency Acting Administrator Andrew Wheeler was introducing the new rule that will vastly scale back federal water protections, Matthew Starr was preparing to take water samples from the Neuse River.

Starr, one of two official keepers of the North Carolina river, already has a hard job. As a protector of the Neuse, a body of water that has been judged “most endangered” and the nation’s seventh-most polluted river by the environmental group American Rivers, Starr contends daily with pollution from human and animal waste, chemicals, real estate development, storm runoff, coal ash, and wastewater treatment plants. Climate change, which has resulted in more intense and frequent storms, has intensified the river’s challenges.

With the new water rule, which the EPA released on Tuesday, Starr’s job of measuring and cleaning up water contamination in the Neuse is about to get exponentially harder.

Consider what he calls the “poop side of the problem.” In the past few months, Starr has spent much of his time measuring E. coli levels that have increased after raw human feces and urine was released into the Neuse from wastewater treatment plants and sanitary sewers after Hurricane Florence. “The storm also dumped a tremendous amount of swine and poultry waste into our water,” said Starr, as he drove his beat-up blue Chevy pickup truck past rows of identical hog barns. It’s easy to see how the liquefied waste of the river basin’s 1.4 million hogs, which is stored in 640 hog waste lagoons, could make its way into the river, which is sometimes just dozens of feet away from the hog farms. Using machines that look like giant metal paint rollers, the farmers spray the waste onto the nearby fields, many of which are cut through by small streams and ditches.

Some of those waterways, which swell and multiply after rainfalls, will no longer be subject to the Clean Water Act when the new rule takes effect. And that means that when Starr finds elevated levels of pollutants, he will have no recourse. Just figuring out which waterways are still covered by the federal law may soon add significantly to his burden.

Wheeler promised that the new water rule, which will replace water protections that the Obama administration put in place in 2015, would simplify water regulation. “Property owners should be able to stand on their property and be able to tell if a water is federal or not without hiring outside professionals,” he said at a press call on Monday.

But the idea that the new rule will be simple to implement is one of several Trump administration narratives about its latest rollback that have begun to unravel in the days since the rollback’s announcement.

Starr and others who work directly with rivers and streams say the EPA’s new definition of Waters of the United States will make it harder rather than easier to tell which waterways are regulated. The new rule takes protections under the federal Clean Water Act away from all ephemeral streams, which depend on rainwater, while likely leaving in place protections for some but not all “intermittent” streams, which flow during only part of the year.

“The idea that people who aren’t scientists can figure out which streams are ephemeral and which are intermittent is laughable,” said Starr. “This is not a simple you walk out and look at it. There’s a lot of science that goes into it. When does the stream have flow? What kinds of flora and fauna does it have? What’s the topography? Does it have a bank or a clear, defined channel?” 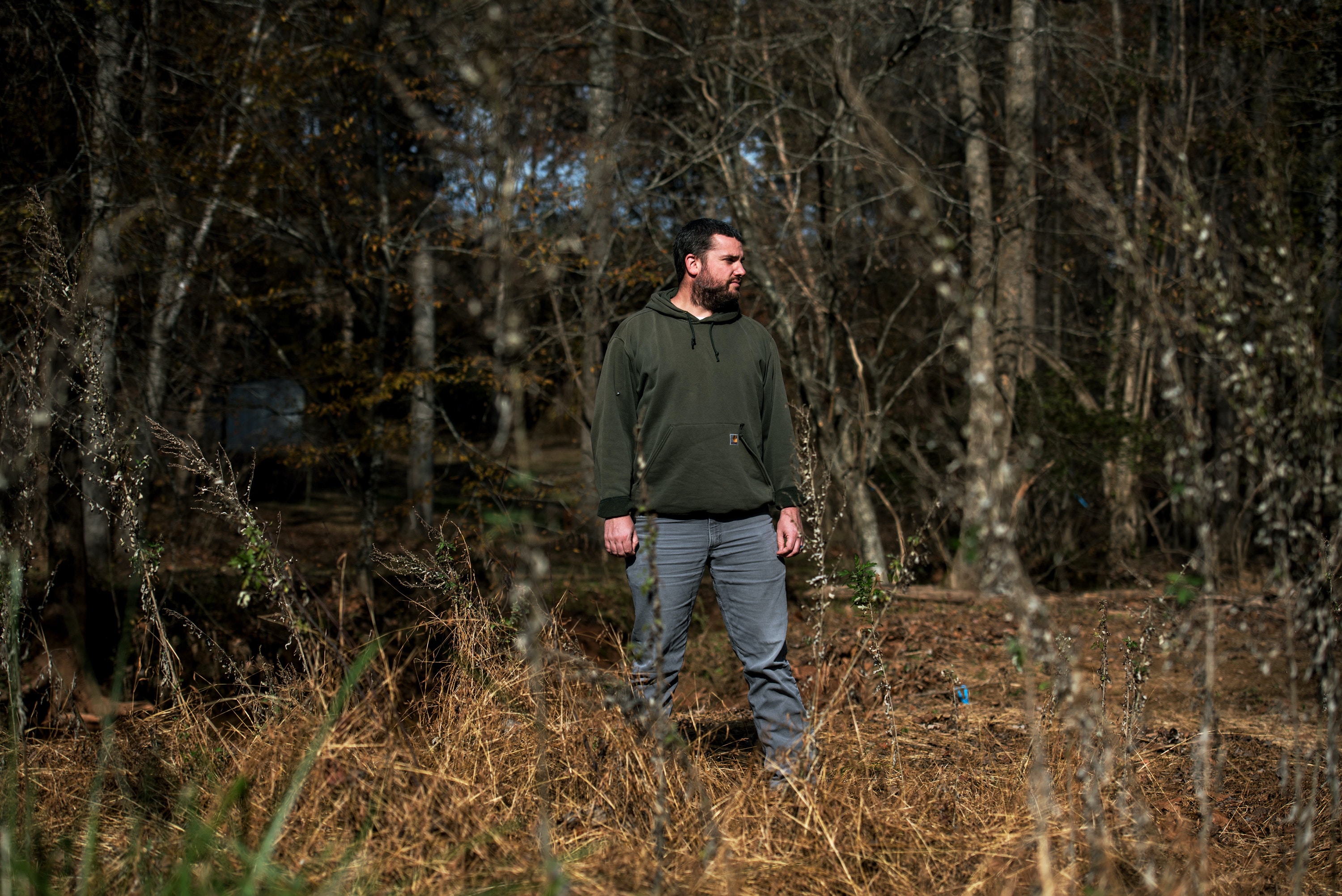 Matt Starr, one of two official keepers of the upper Neuse River.

Indeed, the similarity of the two types of water bodies is underscored by the EPA’s own documents. A 2008 report from the agency on the hydrological significance of intermittent and ephemeral streams notes the overlapping roles of both kinds of waterways.

“They perform the same critical hydrologic functions as perennial streams: they move water, sediment, nutrients, and debris through the stream network and provide connectivity within the watershed,” the report noted, going on to warn of the dangers of harming these critical components of our water system. “The disturbance or loss of ephemeral and intermittent streams has dramatic physical, biological, and chemical impacts, which are evident from the uplands to the riparian areas and stream courses of the watershed.”

The difficulty of distinguishing between these two types of waterways was further underscored by the agency’s own slides, which the EPA released in response to FOIA request from E&E News. While Wheeler told reporters on a press phone call hours earlier that it was impossible to calculate the impact of the new rule because the “data doesn’t tell the difference between intermittent and ephemeral streams,” the slides showed that the EPA had already crunched those numbers. According to its analysis, 18 percent of streams nationwide are ephemeral and 52 percent are intermittent. The agency pointed out in a footnote that because many ephemeral streams are “classified as intermittent or are not mapped,” that figure likely underestimates the true number of intermittent streams.

In addition, the new rule would lift federal protections from “isolated” lakes and ponds, which are not directly connected by permanent water to navigable rivers. And depending on the feedback it receives during an upcoming 60-day waiting period, the new rule may wind up stripping protections from intermittent streams and even some stretches of perennial waterways.

An economic analysis of the rule released by the Army and the EPA this week undermines another fiction the agency has put forward about the water rule: that states will protect waterways that the federal government abandons. Wheeler and other proponents of the EPA’s rollback of the water rule put in place in 2015 have celebrated the proposed language as returning water regulation to the states. But, as the report notes, 13 states, including North Carolina, have laws in place that make it impossible for states to pass water regulations stricter than federal ones. Twenty-three other states have laws making it difficult to adopt water regulations that are stricter than the federal law.

Even states where more protective laws remain on the books may not have the funding or political will to enforce them. The difficulties tracking and holding powerful polluters accountable is a large part of the reason that most waterways that have been assessed (including more than 70 percent of ponds, lakes, and reservoirs) already violate water quality standards.

In North Carolina, which has repeatedly slashed funding for its Department of Environmental Quality, the state is already struggling to hold polluters accountable for violations of water laws.

“We have to do a lot of the enforcement work ourselves,” said Starr, as he drove his pickup past a stretch of Lick Creek on a recent Tuesday. Recognizing the muddy flow as the result of sediment pollution, which can threaten fish and drinking water, Starr pulled over so that he could call in the problem to the state’s Department of Environmental Quality.

Starr regularly finds himself doing environmental policing and had even called the state twice before about this particular creek, which is near the site of a large residential development. The state fined a company working on the nearby construction site $210 last year. And, when he called, a representative of the North Carolina Department of Environmental Quality told Starr that the agency was “working with the company on the problem.” But the sedimentation, which can threaten fish and drinking water there, has remained.

“And this is a regulated waterway,” said Starr. “What will happen when they’re not regulated?” 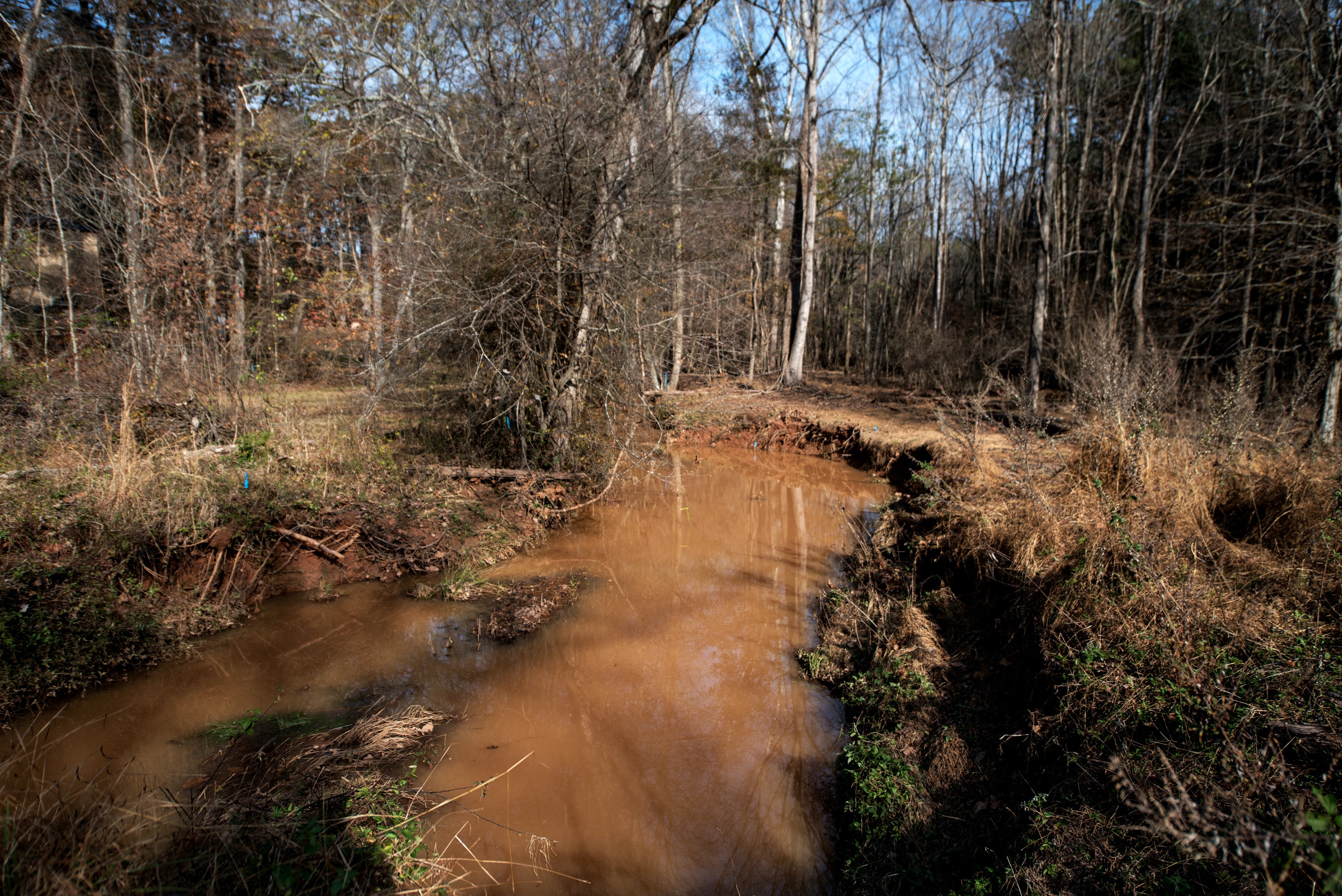 A view of overflow from a construction site where a new housing development will be and which is causing pollutants to leak into Lick Creek, in Durham County, N.C.

The question of enforcement under the new rule is baffling some legal experts, who point out that in many instances it will be extremely difficult to punish polluters even when they release contamination into waterways that retain federal protections.

“Even if it’s technically true that you could hold someone responsible for discharging into a ditch that wouldn’t be a water of the U.S., the argument is that you could nail them when those pollutants flow from the ditch into a regulated water,” said Daniel Estrin, general counsel and advocacy director of the Waterkeeper Alliance. “But that ignores practical realities. Most often that pollution is going to flow miles past many landowners before it gets there. And the idea that you could ever hope to prove where the pollutants entered the stream is a practical impossibility.”

The challenges that the new rule poses to enforcement may explain why so many water-polluting industries pushed so hard for it. The Waters Advocacy Coalition, an umbrella group that spent more than $1 million lobbying to limit federal water protections and had 48 trade group members — including the National Pork Producers Council and the Fertilizer Institute — as of 2017, lobbied for the new rule. Other industry associations that lobbied for it, too, include the National Renderers Association, the National Cattlemen’s Beef Association, the American Farm Bureau, the National Turkey Federation, and the Commercial Real Estate Development Association.

The corporate interest belies yet another myth about the water rollback: that it was intended to bring relief to the small farmer. While the Trump administration worked hand in hand with the beef lobby to assail the 2015 water rule as an assault on small farmers, the rule didn’t actually affect how they operate.

“The Clean Water Act has very clear exemptions for agricultural activities and that wasn’t changed by 2015 rule,” said Betsy Southerland, an environmental scientist who served as director of science and technology, among other positions, during the three decades she worked at EPA. “This is one of those situations where the American Farm Bureau has fostered a false narrative that has scared farmers about the implications of the 2015 rule.”

Now that the new rule has been introduced, it’s environmentalists who are scared.

“It’s hard to overstate how bad this will be for our waters,” said Starr. He is now awaiting the results from the latest round of testing he did on water from the Neuse River. “Though, when the protections go away, the samples will mean jack shit.”