Climate activists from Extinction Rebellion met in Manhattan to discuss how they might replicate their success in the U.K. 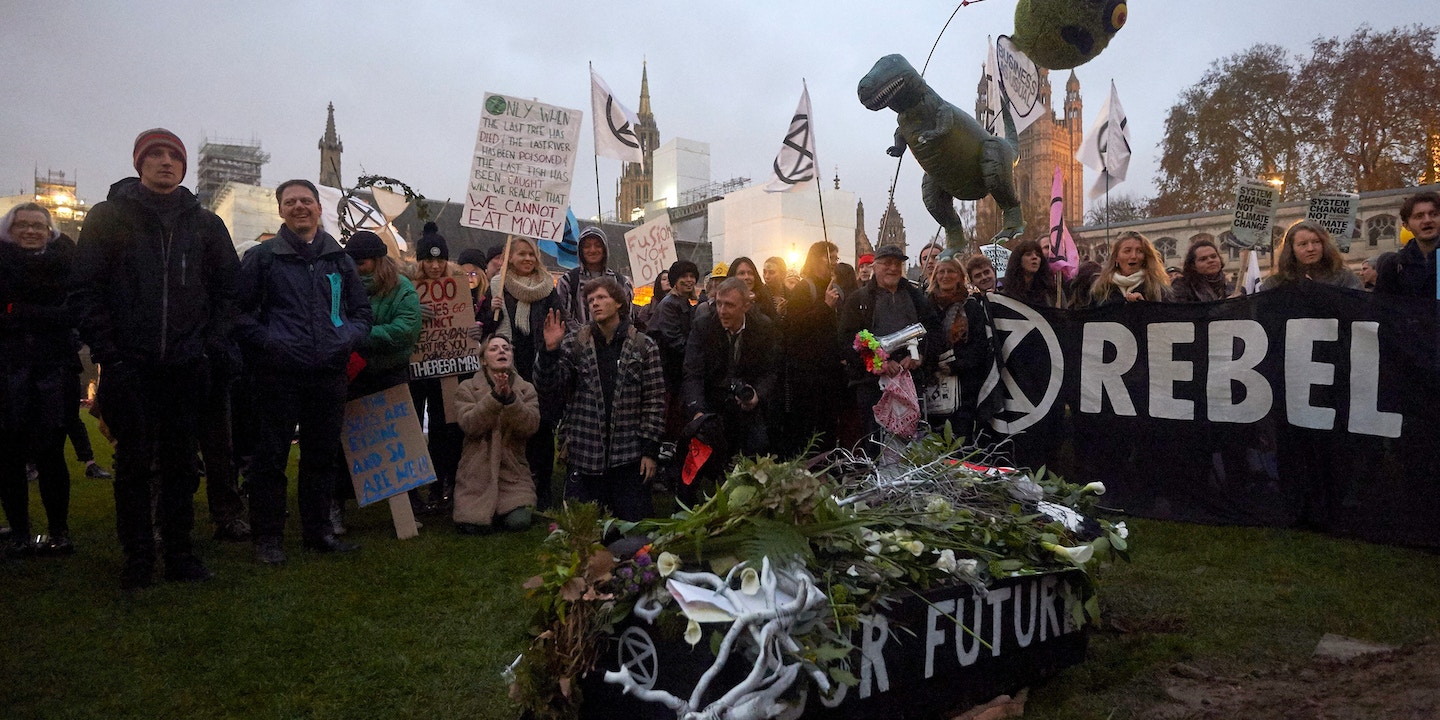 The New York chapter of Extinction Rebellion held its first planning meeting on Thursday. Incensed and terrified by the accelerating climate crisis, activists gathered in Manhattan to discuss how they might replicate some of the successes the direct-action group has had in the United Kingdom.

In London, less than a month after Extinction Rebellion activists blocked roads, occupied bridges, lay down in the street and got arrested to draw immediate attention to the climate crisis, Mayor Sadiq Khan declared a climate emergency, vowing to do “everything in our power to mitigate the risk” of climate catastrophe. Coincidence? Greg Schwedock doesn’t think so.

“That was unthinkable before the Extinction Rebellion,” Schwedock told a standing room-only crowd gathered in a Manhattan co-working space on Thursday night. Dressed in office gear and “Rise and Resist” sweatshirts, accompanied by their children and at least one dog, the attendees came together with the hope that a New York chapter of the group might have similar success in sparking a response commensurate with the dire crisis.

“Getting a million people to D.C. isn’t enough. We need to escalate,” said Schwedock, who emphasized that the group will take the path of disruptive, attention-grabbing civil disobedience, rather than just marching and chanting about the importance of climate change. “We’re not the ‘Extinction Yell About It.’”

The explosive growth of the Extinction Rebellion — which began in England with the support of a group of academics just a few months ago and already has 190 affiliates on five continents — is fueled by the ballooning ranks of people around the world who are frustrated, alarmed, and depressed by the failure to tackle the accelerating climate disaster.

Brian Grady counts himself among them. Grady, a 35-year-old housing coordinator at Housing Works, often has trouble sleeping because of his escalating worry about the climate. A video he came across online recently that showed Extinction Rebellion activists getting arrested “was the first thing that made me hopeful,” said Grady. “It was such a relief. It was like finally someone’s doing something.” Drawing inspiration from the civil rights movement, Occupy Wall Street, and HIV/AIDS protest group ACT UP, Extinction Rebellion makes clear demands, among them that the government must “tell the truth about the climate” and “enact legally binding policy measures to reduce carbon emissions to net zero by 2025.” But it also aims to acknowledge and draw on the intense emotions that come with the environmental calamity that’s upon us. “Even while resolving to limit the damage, we can mourn,” is how Gail Bradbrook, one the organization’s founders in England, puts it.

In New York, after observing two minutes of silence on Thursday to acknowledge their collective grief, the activists discussed what they might do on a national day of action coming up on January 26. As you might expect from a grassroots group with no centralized structure, there was a wide range of ideas, including a mock funeral procession, London-style bridge shutdowns, and an action in Times Square, where, as a man with gray stubble pointed out, “cops are loathe to use a lot of violence in front of all the tourists.”

By the end of the evening, a New Jersey chapter had formed, Rev. Billy of the Church of Stop Shopping had teamed up with other activists who prefer to voice their protest in song, and a small group had begun discussing how the group might target industrial farming in this country.

“It could have been more organized,” Runar Finn Robinson observed as activists swapped phone numbers and set up next meetings around him. Still, Robinson, who is 11 and attended the meeting with his parents and his 9-year-old brother, Odin, felt the evening was a success. On Monday, they had all participated in a Sunrise Movement climate march in Washington. Altogether, he said, the week was “one of our best family vacations.”

Yasemin Cag also felt encouraged by the gathering. A high school senior, Cag has been beyond frustrated by the measured response to climate change. “The time is passed for people to just spout scientific facts,” said the 17-year-old. The Extinction Rebellion, which she found online, seemed to capture the urgency she felt. At the meeting, she met two other teens who shared her grief and fury — and, like her, had given up meat, dairy, and buying new clothes.

Cag admitted she had taken the train in from New Jersey to attend the meeting without telling her parents. But, as she told her new friends as she left the meeting and headed to the PATH train, any risk she ran of getting in trouble was well worth it.