“As public officials there are a lot of impositions on our lives. This is not one of them. Having a diversified portfolio is an easy thing.” 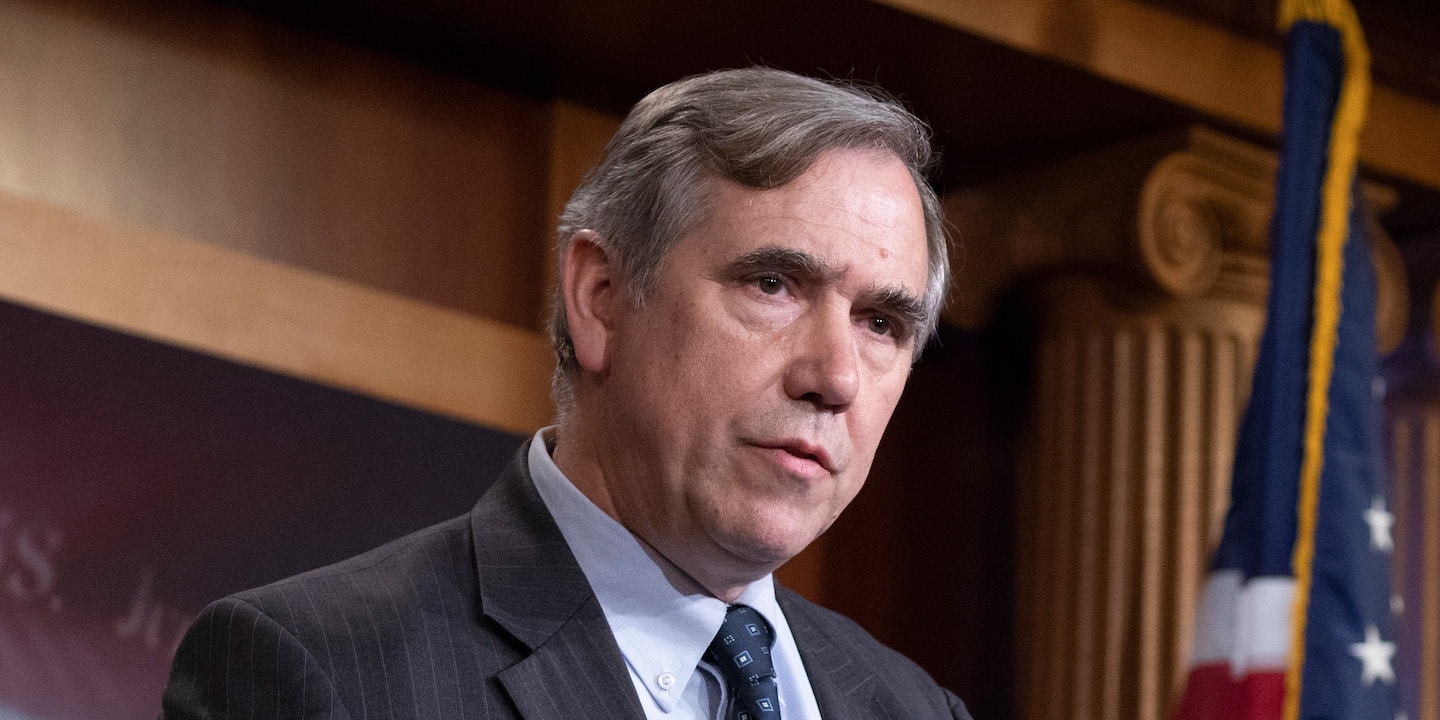 Sen. James Inhofe, an Oklahoma Republican recently elevated to chair the Senate Armed Services Committee after the death of John McCain, was implicated recently in what looked to be an insider trading scandal. A few days after meeting with President Donald Trump and Secretary of Defense Jim Mattis to successfully advocate for a military budget increase, Inhofe purchased between $50,000 and $100,000 of stock in defense contractor Raytheon, which stands to profit from additional defense spending.

Inhofe tried to manage the controversy by claiming that a third-party financial adviser handles his stocks and made the purchase without his knowledge. Minutes after being questioned about the trades, he wrote a letter to his adviser, asking him to no longer trade defense or aerospace stocks. Inhofe has even taken to carrying around a card with a stock reply to journalists about the matter.

But the Raytheon trades represent only a fraction of his trading activity. The same day that Inhofe revealed the Raytheon purchase, he also disclosed the sale of between $15,000 and $50,000 worth of stock from Celgene, a biotech firm, along with a similarly sized sale of stock in Aptiv, the auto parts maker formerly known as Delphi. A month earlier, Inhofe revealed trades in General Electric, Salesforce.com, American International Group, XPO Logistics, Albemarle, Intuitive Surgical, and Intellia Therapeutics.

There’s no way to test Inhofe’s claim that a third party manages his stock portfolio, absent a monitor tracking Inhofe 24/7: He could make a phone call or send a message to direct a trade at anytime. But it’s clear that Inhofe is trading millions of dollars worth of stock a year, while voting on legislation that affects public companies.

It’s clear that Inhofe is trading millions of dollars worth of stock a year, while voting on legislation that affects public companies.

In fact, over the course of 2018, Inhofe has made 57 individual stock trades, according to Senate disclosure forms. The value of these trades totaled somewhere between $1.72 million and $4.11 million. In 2017, according to Inhofe’s annual report, he made another 52 trades.

Congress attempted to prevent legislators from insider trading with the 2012 STOCK Act, which prohibits members and their staffs from exploiting insider information discovered in the course of policy deliberations. But unlike corporate “insiders,” members of Congress are not required to establish arms-length trading plans — nor has the House fully cooperated with efforts by the Securities and Exchange Commission to investigate potential wrongdoing.

When compared to corporate insiders, members of Congress are exposed to a much broader array of insider information which implicates a wide range of companies. Given that members of Congress hold a unique position of public trust, Sens. Jeff Merkley, D-Ore., and Sherrod Brown, D-Ohio, both potential Democratic presidential candidates, want to put a stop to all the trading. Last week, they introduced legislation that would permanently ban members of Congress and senior staff from trading individual stocks.

“We should not be in the position of thinking about legislation in the context of personal investment,” Merkley told The Intercept in an interview. “As long as you own stocks, it’s hard to rule out of your mind. And the public sees it as a conflict of interest.”

“We should not be in the position of thinking about legislation in the context of personal investment.”

Under the Ban Conflicted Trading Act, all members would have six months after enactment to divest their shares. New members would get six months from their entry into Congress to divest. Members and senior staff could also opt to transfer stocks to an independent blind trust, or hold them for as long as they served in government, as long as they do not sell or buy more stocks. Diversified mutual funds or exchange-traded funds would still be allowed.

Merkley questioned whether the Inhofe situation represented a true blind trust. Without assurance that a lawmaker has no role in stock-picking, public cynicism over their trading will remain. “You would have to be legitimately, 100 percent blind,” he said.

Another section of the bill prohibits members from serving as officers on corporate boards, which amazingly is not already disallowed. Rep. Chris Collins, R-N.Y., was indicted earlier this year for advising friends and family to dump shares of the biopharmaceutical company Innate Immunotherapeutic after learning that a clinical trial for the company’s key multiple sclerosis drug failed. Collins knew about the failure before it was public, because he sat on the company’s board.

Currently, Senate ethics rules ban members and staff from serving as board members of publicly traded companies, but House rules do not. Even the Senate rules permit board membership of tax-exempt organizations. Merkley believes codifying into law a full prohibition on members of the House or Senate serving on corporate boards would be beneficial.

The Collins indictment, incidentally, was the one and only instance of a prosecution under the 2012 STOCK Act. While a 2017 Public Citizen report did show that the STOCK Act has reduced market trading activity among members of Congress, it still found between $104 million and $337 million in trades by U.S. senators in 2015, which was the last year studied.

Individual incidents continue to dog the reputation of Congress. In 2017, former Congressperson Tom Price’s confirmation hearing for secretary of health and human services was dominated by questions about his numerous stock holdings in health-related companies. Price made several pharmaceutical stock trades on the same day that he pressured regulators to repeal a rule that would harm drug company profits.

In addition, there are numerous instances of senators trading stocks of companies they nominally oversee through committee work, as the Public Citizen report indicates: Sen. Bob Corker, R-Tenn., has recently traded hundreds of thousands worth of stock in energy infrastructure businesses while sitting on the Senate Banking, Housing, and Urban Affairs Committee. Sen. Thad Cochran, R-Miss., is also a busy player in energy stocks while sitting on the Senate Appropriations Subcommittee on Energy and Water Development. Sens. Sheldon Whitehouse, D-R.I., and Pat Toomey, R-Pa., actively trade in health care stocks while serving on health care subcommittees. Sen. Tom Udall, D-N.M., trades in natural resources and precious metals stock while on subcommittees that oversee these industries.

(Cochran is no longer in the Senate, having resigned due to health concerns in April.)

“We really have to establish a public trust of behavior.”

“We really have to establish a public trust of behavior,” Merkley said. “As public officials, there are a lot of impositions on our lives. This is not one of them. Having a diversified portfolio is an easy thing.”

Banning congressional stock trading could also make it easier to pass a 0.1 percent tax on stock trades, which the Congressional Budget Office this week estimated would raise $777 billion over 10 years.

Under the bill, if members or senior staff are found to have traded stocks while in office, the congressional Ethics Committees would be empowered to fine them no less than 10 percent of the value of the investment. Of course, congressional Ethics Committees are made up of members of Congress, and they have historically been rather lax in enforcing rules against fellow members. It will also be a challenge for the Merkley bill to pass the Republican-controlled Senate in the first place.

Separate from Merkley’s proposed legislation, Federal Trade Commissioner Rohit Chopra has called for an independent Public Integrity Protection Agency, which would consolidate enforcement capability that is currently spread around the government and would have the ability to investigate and penalize government officials and those seeking influence. Asked about the idea, Merkley responded, “My first impression is that an office dedicated to the mission of transparency and accountability sounds great.”

Democrats in the House have prepared a broad anti-corruption bill for their first act when they take over Congress next year, but while it beefs up some restrictions on members and provides new enforcement powers to the Office of Government Ethics, it does not include anything on congressional stock trading.

Merkley’s choice to spearhead anti-corruption efforts might be read as part of his efforts to distinguish himself in a crowded 2020 primary field. When asked about his presidential ambitions, Merkley told The Intercept, “I’m exploring it and will decide within the first quarter [of next year].”