Paranoid conspiracy theories about George Soros were first injected into the far-right imagination by Fox News, and the channel shows no signs of letting up. Paranoid conspiracy theories about George Soros — the liberal philanthropist and financier cast, in starkly anti-Semitic terms, as a shadowy puppet master bent on toppling governments — are now so common that it is easy to forget that this viral meme was first injected into the far-right imagination by Fox News more than a decade ago.

An otherwise valuable new article for BuzzFeed by the Swiss journalist Hannes Grassegger — which explains how Hungary’s prime minister, Viktor Orbán, focused his entire re-election campaign on the imaginary threat posed by Soros, a Hungarian-born Jew — is marred by an incomplete history of the meme.

Grassegger, perhaps because Fox News is not broadcast in Switzerland, appears to be unaware of the key role played by Rupert Murdoch’s channel in spreading this myth, and incorrectly attributes the creation of the anti-Soros meme to the late Arthur Finkelstein, an American political consultant who advised Orbán.

Grassegger is right to report that Finkelstein and his partner George Birnbaum “turned Soros into a meme” in Hungary, starting in 2013, portraying the billionaire as an enemy of the Hungarian people in posters and attack ads disguised as public service announcements. But his claim that the two men “created a Frankenstein monster that found a new life on the internet,” prompting baseless smears about Soros to spread across the globe, fails to note that the coded anti-Semitic attack on Soros had appeared on Fox News six years earlier.

Years before Finkelstein advised Orbán to use Soros as a punching bag — casting his financial support for education, human rights, and democracy in Hungary as somehow nefarious — the Fox News hosts Bill O’Reilly and Glenn Beck had already vilified the Holocaust survivor in similar terms. O’Reilly started by accusing Soros of secretly giving “millions to politicians who will do his bidding,” before Beck went full Stürmer by describing Soros as “the Puppet Master.” (Finkelstein, a veteran Republican consultant who lived outside Boston, was no doubt aware of Beck’s attack on Soros, which generated significant news coverage, and criticism from the Anti-Defamation League, a Jewish advocacy group, in 2010. His business partner, Birnbaum, who was based in Atlanta, was a frequent guest on Fox News programs in the years before the two men urged Orbán to adapt the pre-existing smear of Soros for domestic consumption in Hungary.)

O’Reilly first introduced Fox News viewers to his caricature of Soros as a shadowy financier bent on “imposing a radical left agenda” on Americans on April 23, 2007. The goal of Soros, O’Reilly warned darkly, was “to buy a presidential election.”

To do this, O’Reilly claimed, “Soros has set up a complicated political operation designed to buy influence among some liberal politicians and smear people with whom he disagrees.” O’Reilly’s complaint about Soros-backed smears was a reference to the billionaire’s support for Media Matters, a liberal watchdog group that had irked the Fox News pundit by regularly fact-checking and debunking his false claims.

O’Reilly’s analysis was then echoed by one of his guests, the conservative talk-radio host Monica Crowley, who claimed that Soros’s donations to liberal groups were “a brilliant way to get around the campaign finance laws in this country,” which he had been able to keep secret “before you just exposed him, because the mainstream media protects him.” Another guest, the far-right political activist Phil Kent, later chimed in to describe Soros as “really the Dr. Evil of the whole world of left-wing foundations” who “really hates this country.”

Although O’Reilly did not refer to Soros’s ethnicity, his criticism of the financier as a shadowy string-puller appealed to the imaginations of anti-Semites online. Less than a year later, Soros was portrayed as “a Jewish tycoon,” secretly directing American foreign policy from inside the White House, in a bizarre animated propaganda film broadcast on Iranian television. The public service announcement produced by Iran’s intelligence ministry warned viewers that Soros was “the mastermind of ultra-modern colonialism,” who “uses his wealth and slogans like liberty, democracy, and human rights to bring the supporters of America to power.” In the cartoon, Soros was shown plotting to overthrow Iran’s government, with the help of the CIA, John McCain, and Gene Sharp, a political scientist whose theoretical work on nonviolent protest influenced color revolutions in Eastern Europe.

By October 2008, the idea that Soros was secretly controlling American politics was even lampooned on “Saturday Night Live,” in a sketch that identified the financier in an on-screen graphic as “Owner, Democratic Party.” 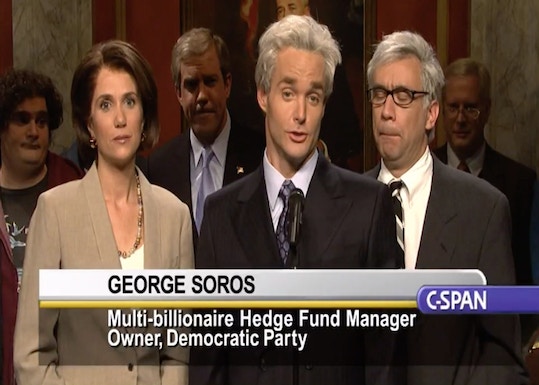 The actor playing Soros in the sketch, a mock C-SPAN broadcast, even joked that he had drained hundreds of billions of dollars from the American economy during the financial crisis and was planning to devalue the dollar.

Two years later, Fox’s Glenn Beck made the echo of anti-Jewish Nazi propaganda impossible to ignore, calling Soros a “puppet master” who “collapses regimes” in a broadcast — complete with actual puppets — that columnist Michelle Goldberg described as “a symphony of anti-Semitic dog-whistles.”

In his long indictment of Soros, what Beck did not say about the list of governments he claimed the philanthropist had helped to topple was striking. Before claiming the United States would be Soros’s next “target,” Beck ominously intoned, “Soros has helped fund the ‘Velvet Revolution’ in the Czech Republic, the ‘Orange Revolution’ in the Ukraine, the ‘Rose Revolution’ in Georgia. He also helped to engineer coups in Slovakia, Croatia, and Yugoslavia.” Beck failed to mention that in each of the countries he named, Soros had provided support to popular pro-democracy groups battling repressive regimes led by Communist or former Communist autocrats.

There were also no coups in Slovakia, Croatia, or Yugoslavia. Slovakia was created by the so-called velvet divorce, the peaceful dissolution of the federal state of Czechoslovakia by democratically elected leaders in 1993; Croatia’s wartime president, Franjo Tudjman, an authoritarian former Communist general, died in office in 1999 and was replaced by a former member of his party after a democratic election; Slobodan Milosevic, the Yugoslav leader who was most responsible for the brutal campaign of ethnic cleansing that killed tens of thousands in Bosnia, Croatia, and Kosovo, resigned in 2000, following street protests after his loss in a democratic election.

Beck’s elaborate conspiracy theory, sketched out on both sides of a series of blackboards and bringing the online rantings of anti-Semites like David Duke to a mainstream audience, was so unhinged that it inspired an extended parody by Jon Stewart.

Asked at the time what he made of Beck’s claims “that you are the mastermind who is trying to bring down the American government,” Soros told Fareed Zakaria of CNN: “I would be amused if people saw the joke in it, because what he is doing, he is projecting what Fox, what Rupert Murdoch is doing — because he has a media empire that is telling the people some falsehoods and leading the government in the wrong direction.”

“Fox News,” Soros added, “has imported the methods of George Orwell, you know, Newspeak, where you can tell the people falsehoods and deceive them.”

While it is difficult to trace the influence of Fox News in Europe, where it is not broadcast on television, copies of Beck’s program, “The Puppet Master,” have been widely shared online, and the conspiracy theory soon became a matter of faith for far-right commentators on American websites. 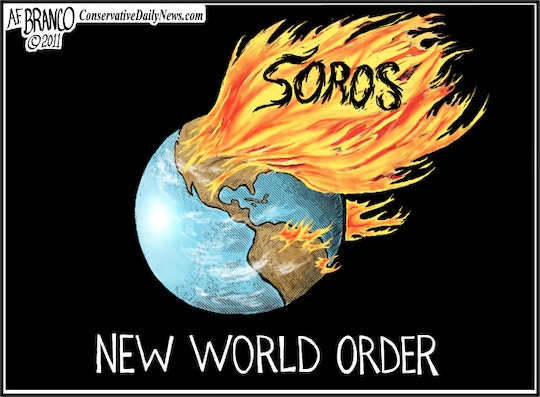 An online editorial cartoon, published in 2011, showed how well-established conspiracy theories about George Soros were by then.

The conspiracy theories about Soros are now so widespread that earlier this week, Yair Netanyahu, the Israeli prime minister’s son, shared a link to a post by Pamela Geller, a far-right blogger, who distorted remarks made by Soros about how he survived the Holocaust to falsely accuse him of having been “a Nazi collaborator.”

Even after parting company with both Beck and O’Reilly, Fox has continued to focus obsessively on spreading invective and false claims about Soros as a hidden mastermind of liberal causes.

In April, one of the network’s new stars, Tucker Carlson, declared on air that “George Soros hates the United States.” Another new arrival, Laura Ingraham, claimed that Soros was behind protests against the confirmation of Brett Kavanaugh to the Supreme Court, despite a credible allegation of sexual assault. And in October, Lou Dobbs of Fox Business News made no objection when Christopher Farrell, the head of the far-right Judicial Watch, claimed that Soros was funding a caravan of asylum-seekers marching to the U.S. border, through the “Soros-occupied State Department.”

Straight out of the Protocols of the Elders of Zion. Just moments ago, Lou Dobbs guest Chris Farrell (head of Judicial Watch) says Caravan is being funded/directed by the "Soros-occupied State Department". pic.twitter.com/QBSong7uk1

The same week, Fox News reported that a pipe bomb had been sent to the home of “Democratic mega-donor George Soros.”

“This comes at a time,” the Fox News correspondent Bryan Llenas observed from outside Soros’s home, “when Soros’s name has been recently evoked by right-wing activists, including with the caravan moving forward. Rep. Matt Gaetz, just a few days ago tweeted, suggesting that Soros perhaps was part of the funding — funding the migrant caravan moving to the border. And the president himself has evoked Soros’s name recently, in Missoula, Montana, talking about Soros perhaps funding liberal protesters.”