The Monopolist in the House: Rep. David Trone’s Wine Company Seeks to Overturn a Constitutional Amendment

Total Wine is embroiled in a Supreme Court case that challenges the 21st Amendment, which ended Prohibition, while its co-owner is a Democrat in Congress. 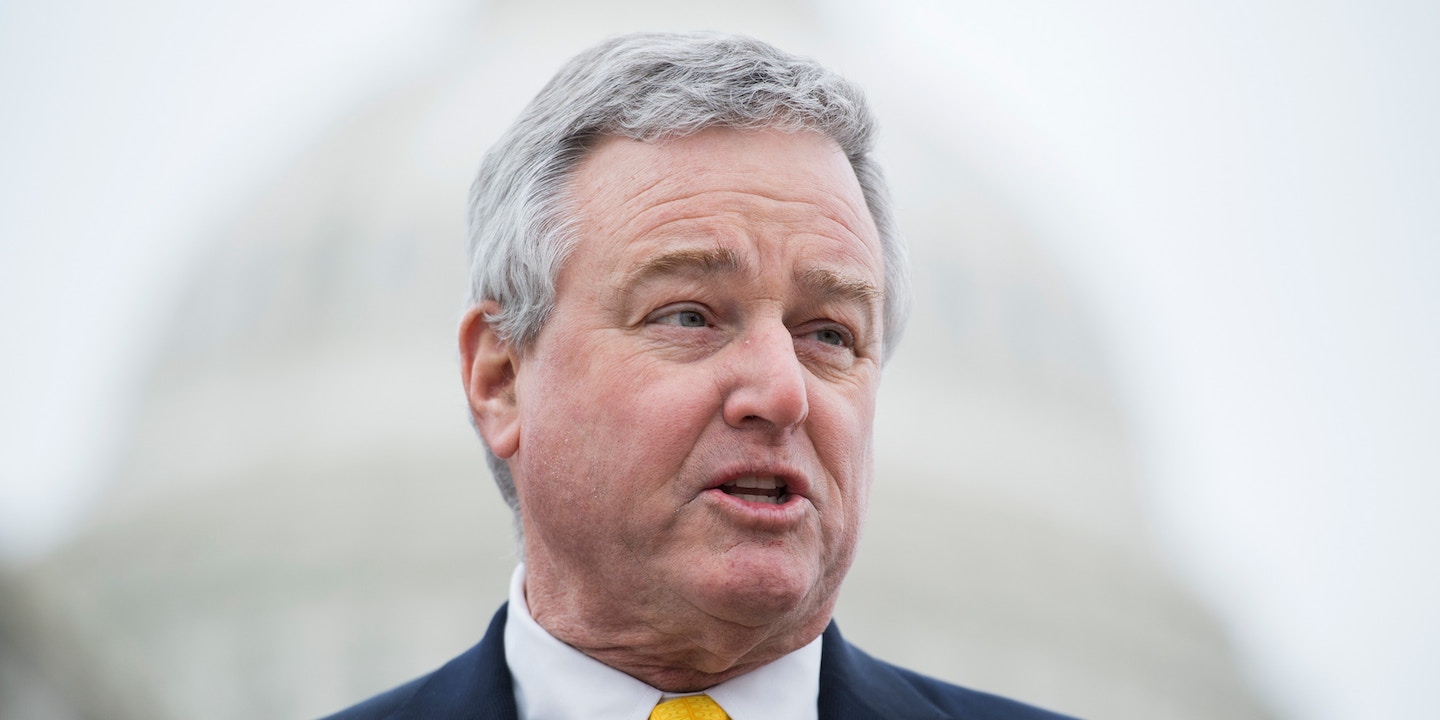 President Donald Trump has been reasonably condemned for attempting to trash the Constitution. But there’s only one active politician in America working to actually reverse a standing constitutional amendment.

David Trone was elected in 2018 to fill the seat of John Delaney, who seems to think that he’s running for president. Trone won a spirited primary with the assistance of $14.2 million in self-funded contributions and another $3.25 million in personal loans. This available fortune was generated from Trone’s personal alcoholic beverage empire. Total Wine, which Trone co-founded with his brother, is America’s largest privately owned retailer of beer, wine, and liquor, with 193 stores in 23 states. Trone served as president of Total Wine until December 2016 and is still listed as co-owner of the company on its website.

Total Wine is currently embroiled in a Supreme Court case that challenges the 21st Amendment, which ended Prohibition. In Tennessee Wine & Spirits Retailers Association v. Blair, Total Wine claims that Tennessee cannot impose a two-year residency requirement for obtaining a retail license to sell alcohol. This has proven a barrier for Total Wine and for Doug and Mary Ketchum, who recently moved to Tennessee after agreeing to take over a mom-and-pop liquor store in Memphis.

But the residency issue is a stalking horse for the question of whether states have the right to regulate alcohol sales within their borders. While the 21st Amendment is seemingly very clear on that, alcohol producers and retailers have persistently fought it. If the Supreme Court sides with Total Wine, state alcohol laws will have little or no force, making it easier for retail giants to dominate the sector and potentially roll back health and safety measures on alcohol in a drive for profit.

So you have David Trone, a proud member of the new Democratic congressional majority, trying to use a conservative judiciary to deregulate an industry so that his wine shops can pop up on every street corner in America.

Section 1 of the 21st Amendment, ratified on December 5, 1933, simply repeals the 18th Amendment, which ushered in Prohibition 14 years earlier. But Section 2 bans “the transportation or importation into any State, Territory, or possession of the United States for delivery or use therein of intoxicating liquors, in violation of the laws thereof.” In other words, all alcohol producers or distributors had to follow local laws in order to make legal sales. This was seen at the time as a compromise to allow “dry” counties or states to continue with their local preferences. (In fact, parts of Trone’s district were dry until recently.)

In this case, the Ketchums moved from Utah in July 2016 to open a wine shop in Memphis. The Ketchums’s daughter has cerebral palsy, and the weather in Tennessee was deemed better for her ailment. The Tennessee Alcoholic Beverage Commission was actually ready to approve the application; the state hasn’t really enforced the two-year residency rule for several years, and Tennessee’s own former attorney general once claimed that it’s “probably unconstitutional.”

But the Tennessee Wine and Spirits Retailers Association, a local trade association, threatened to sue the state for not adhering to the residency requirement. Tennessee’s law is actually even more restrictive: The initial license expires after one year, and applicants looking to renew must be residents for 10 years.

At the same time, Total Wine wanted to open two new outlets in Nashville and Memphis, which would have faced hurdles if the residency rule was newly enforced because a retailer’s directors and officers must all be residents (thanks to the lax enforcement, Total Wine already has a store in Knoxville). Total Wine, at the time still under Trone’s direction, argued that the 21st Amendment was in conflict with the so-called dormant commerce clause doctrine, which prohibits states from discriminating against out-of-state or foreign commercial enterprises.

In 2005, the court ruled that laws allowing in-state wineries to ship to local residents had to be available to out-of-state wineries as well, to conform to the Constitution’s delegation of interstate commerce to Congress. According to the ruling, even if Congress made no law specifically on wine sales, the very existence of the commerce clause prohibited restrictions.

But Congress did ratify the 21st Amendment, which gave exclusive regulatory rights over alcohol to the states. Therein lies the dispute.

The 6th Circuit Court of Appeals sided with Total Wine and threw out the residency requirement, further opening the loophole to the 21st Amendment first breached in 2005, from alcohol producers and products to retail businesses. The Tennessee Wine and Spirits Retailers Association appealed to the Supreme Court.

You could view Tennessee’s residency requirement as protectionism to prevent outside companies from doing business in the state. After all, it’s not like Tennesseans, in the home of Jack Daniels whiskey, are forced to do without liquor; they’re just restricted from purchasing from out-of-state sellers.

But Sandeep Vaheesan of the Open Markets Institute argues that opinions about the regulation are besides the point; in plain fact, states have been empowered with oversight over alcohol. The 21st Amendment “sought to ensure that alcohol would still be subject to close public oversight and gave this power to the states to structure markets for alcohol in accordance with local preferences,” Vaheesan and John Laughlin Carter write in an amicus brief to the court.

Vaheesan and Carter believe that the 2005 ruling “violated the plain language of the Twenty-First Amendment” and worry about the broader degradation of states’ ability to regulate alcohol, particularly based on a judge’s prerogative to deem a regulation protectionist. “States should have the authority to structure commerce in alcohol to promote a range of public ends, including but not limited to the protection of public health, the promotion of the responsible use of alcohol, and the maintenance of decentralized markets with many distributors and producers of alcohol,” they write.

Much more is at stake than whether the Ketchums have to wait two years to open a liquor store (indeed, since the Ketchums moved to Tennessee in July 2016, they could legally procure a state liquor license today, at least for the first year). If the ruling is broad enough, it could nullify retail bans on direct-to-consumer wine shipping. That would allow Amazon or Walmart to sell wine over the internet.

More immediately, Total Wine would have fewer restrictions to expand its business from 23 to all 50 states. The national chain has already overrun states without residency laws and would almost certainly use its market power to dominate Tennessee and everywhere else. Ironically, the Ketchums, who teamed up with Total Wine in the lawsuit, may be at risk from Total Wine’s power if they prove victorious.

And if that succeeds, Total Wine and other giants can gain political power in the states, threatening other laws regulating the usage of alcohol. Whether by extrapolation from judicial precedent or brute force lobbying power, those laws could fall. Alcohol markets in the United Kingdom have been effectively deregulated, leading to high rates of intoxication among young people and a veritable public health crisis. Breaking the state regulatory apparatus could worsen alcoholism in America.

At the Supreme Court last week, in oral arguments held on the 100th anniversary of the original Prohibition amendment, several justices appeared skeptical of the residency requirement, with Justice Elena Kagan intimating that it is “clearly protectionist.” But Kagan and Justice Neil Gorsuch did seem to understand the slippery slope at play; Gorsuch wondered whether the next step would be to ask for license to “operate as the Amazon of liquor.”

Gorsuch added that “alcohol has been treated differently than other commodities in our nation’s experience,” and the 21st Amendment provided a barrier to an easy adjudication of the case. Attorneys for the Tennessee Wine and Spirits Retailers Association made similar claims about the amendment’s granting of near-total regulatory power over alcohol to the states.

With Justice Ruth Bader Ginsburg absent and uncharacteristic silence from Chief Justice John Roberts, SCOTUSBlog called it “a hard case to handicap.” But the outcome matters enormously for Trone and the ability to extend his wine empire.

Total Wine has often used tactics designed to corner markets. The company has paid fines in Connecticut for selling wine and liquor below cost, a form of predatory pricing to gain market share and drive competitors out of business. Massachusetts accused Total Wine of the same tactic in 2016, but the company sued the state and won on appeal. In 2016, Maryland cited Total Wine for giving campaign contributions above state limits.

Through it all, Total Wine has continuously expanded across the eastern seaboard and the Southwest, and it ships wine wherever state laws allow. Where expansion has been curtailed, Total Wine has employed lobbyists and lawyers, suing Connecticut, New Jersey, Maryland, and Massachusetts over its alcohol laws.

The midterm victory was Trone’s second attempt at a House seat; he unsuccessfully ran in 2016 for the seat vacated by Chris Van Hollen and now occupied by Rep. Jamie Raskin, D-Md. In 2018, he switched seats and ran in Maryland’s 6th, where residents mysteriously started receiving Total Wine circulars even though there are no outlets in the area.

Hannah Muldavin, communications director for Trone, told The Intercept to contact Total Wine directly for comment. A spokesperson for Total Wine replied that the company doesn’t comment on pending litigation.

Correction: January 23, 2019, 4:59 p.m.
A previous version of this story referred to 19th century oligarch Jay Gould as having served in the Senate. He did not.