The media flipped the narrative, turning the Covington Catholic MAGA teens into victims and erasing the hope of the Indigenous Peoples March. 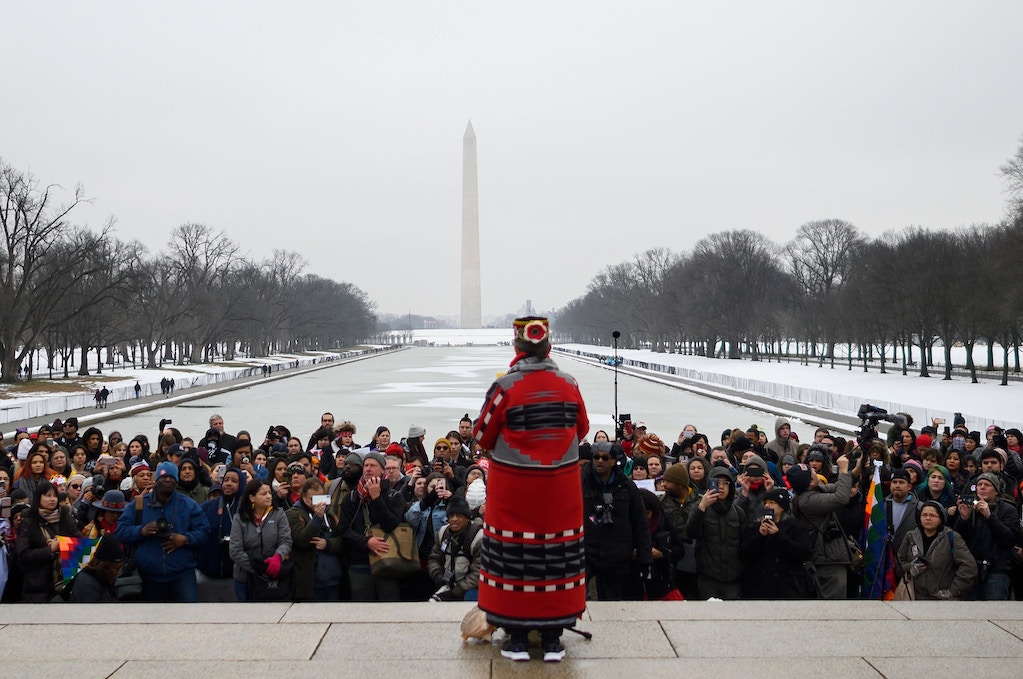 A woman speaks during the Indigenous Peoples March on the National Mall in Washington, D.C., on Jan. 18, 2019.

By now, millions around the world have seen the viral video of dozens of Catholic schoolboys sporting “Make America Great Again,” or MAGA, hats tomahawk-chopping and mocking a Native elder, who was drumming and singing at the feet of the Lincoln Memorial in Washington, D.C. Nathan Phillips, the military veteran and water protector from the Omaha Nation, waded into the crowd of high school students, as he tried to defuse a tense situation between the students and a group of black Israelites who were taunting Natives and passers-by with racist and homophobic comments. It was an iconic moment loaded with history. And what should have been a time of soul-searching for a nation founded on Indigenous genocide has instead morphed into an attack on Indigenous people.

Concern from both liberal and conservative media outlets shifted from confronting the issue of Indigenous erasure — why were Native people marching in D.C. in the first place? — to defending the innocence of white youth.

As soon as the jarring video made international news, an organized media campaign quickly spun the story — turning the jeering Covington Catholic High School students into victims. And concern from both liberal and conservative media outlets shifted from confronting the issue of Indigenous erasure — why were Native people marching in D.C. in the first place? — to defending the innocence of white youth.

Although disgusting, it’s not surprising. And, in perhaps the biggest shame, this pervasive counternarrative quickly wiped the hopeful signs of the weekend out of the national conversation.

Reckoning with the events requires first honoring all that happened last weekend. The confrontation between Phillips and the Covington boys was a single incident, and it shouldn’t eclipse an otherwise historic weekend. These times can be dark, but the Indigenous Peoples March offered a moment of hope: The issues that matter to Native people were put front and center in a show of solidarity. The odds may be daunting, but our communities showed that they’re coming together to fight — with a watchful eye on history and a necessary glance toward the future.

However, the Indigenous Peoples March, which I did not attend, wasn’t the only major event focused on a path forward. Like many, the day after the event, I participated in a local Women’s March in Santa Fe, New Mexico. Organized in concert with the march in Washington and other Women’s Marches around the country, the Women’s March centered life and death issues confronting Indigenous nations, such as the thousands of cases of murdered and missing Indigenous women and girls, the government shutdown that has devastated federal services to already hard-hit Native communities, and the extractive industries polluting Native lands.

It was also a celebration of the elections of the first two American Indian members of Congress, Deb Haaland and Sharice Davids. Indian Country hailed the elections of Haaland and Davids as a repudiation of President Donald Trump’s anti-Indian agenda and as an affirmation of Indigenous women’s leadership. In tandem with last Friday’s march in Washington, it was a weekend of solidarity and camaraderie with millions of Natives and non-Natives galvanized around Indigenous issues.

The last time there was a nationwide spotlight on Native rights of this magnitude was during Standing Rock in 2016, and the last time that thousands of Native people and their allies marched on Washington, D.C., was in March 2017 — to protest Trump’s escalated attack on Native sovereignty and lands. Native elders like Phillips have been a part of these movements at least since the 1970s.

So how did MAGA hats and a sneer steal the show?

The MAGA hat has become synonymous with white supremacy. It was proudly worn by neo-Nazis who marched, beat up protesters, and killed a woman in Charlottesville, Virginia, in 2017. It is worn by the throngs of Trump supporters who are still chanting “build the wall!” The youthfulness of the movement shows that racism isn’t fading away with the clichéd image of white-hooded thugs sporting Confederate flags. Racism is alive and well — and it’s young and angry as hell.

It should come as no surprise that the MAGA hat is associated with the anti-choice marchers who descended on Washington at the same time as Indigenous protesters last Friday. After all, racism and misogyny are part of Trump’s brand of politics and the reason for mass protests against his administration.

With all this context, the media could not refute the clear image of anti-Indian racism unfolding that day: a sneering Nicholas Sandmann wearing a MAGA hat, staring down Nathan Phillips, a drumming and singing Indigenous elder. Young white kids wildly bounced up and down around them like a pack of rabid hyenas.

It was encouraging to see the initial coverage, even if it failed to contextualize the larger Indigenous movement for justice. But at least they got the racism part right.

There were many avenues to pursue with this story, among them the setting. The confrontation unfolded at the feet of President Abraham Lincoln, who ordered the mass hanging of 38 Dakota men days before he signed the Emancipation Proclamation. It took place in a city that sits atop Piscataway land and whose NFL team name is a dictionary-defined racial slur celebrating the scalping of Native people. The students’ tomahawk chops reinforced that sort of all-too-casual pervasive bigotry, a familiar gesture for sports fans of Indian mascots. All of it taking place in the heart of American empire.

In the face of hostility, Phillips sang the American Indian Movement song, known as the “Raymond Yellow Thunder Song” in honor of the Oglala elder brutally murdered by white vigilantes in February 1972.

In the face of this hostility, Phillips sang the American Indian Movement song, known as the “Raymond Yellow Thunder Song” in honor of the Oglala elder brutally murdered by white vigilantes in February 1972. It’s a song of resistance and remembrance, and it was sung during the Wounded Knee Occupation in 1973 and at the frontlines of Standing Rock in 2016.

The waves of history and emotion washed over me when I heard Phillips sing. I remember white boys from my high school chanting, “Get the fuck out of our country, faggot!” at me and my friends when we refused to stand for the Pledge of Allegiance during the U.S. invasion of Iraq. I remember being told, “Go back to where you came from!” by a white woman outside Los Angeles International Airport when I marched against Trump’s Muslim ban. I remember seeing my Native friends spat on by MAGA hat-wearing white men at a Trump rally in Albuquerque, New Mexico. I remember white men shouting, “Go back to the reservation!” at water protectors holding a prayer circle in a mall in Bismarck, North Dakota. In some of those moments of terrible danger, we sang the “Yellow Thunder Song” too and didn’t strike out against the threats in front of us.

This is what many of us saw in that video: steadfast resilience and discipline. We relive these feelings in our daily lives over and over again.

Instead of focusing on the DNA of this settler nation and its profound inability to confront its own history, however, we found out that the sneering MAGA kid’s mom is vice president of Fidelity Investments. The well-to-do family sent their son to a private Catholic school, whose students were once pictured in blackface taunting a Black basketball player in a photo circulating the internet. Sandmann’s family also hired a PR firm to protect his image.

On NBC’s “Today” Show, Savannah Guthrie interviewed Sandmann. The entire history of Indigenous erasure on that day boiled down to a single white boy’s testimony. He appeared without his MAGA hat and calmly mischaracterized his encounter with the Phillips.

You could feel the air being sucked out of the room.

“Umm, I just stood there,” he told Guthrie when asked if he should apologize. With that, the tables switched, and Phillips became the aggressor.

The fault, however, is not with the individual acts of one white kid; it lies with how this story was told and how it has obfuscated a movement and history. That was the greatest loss in this tale: This episode being twisted in order to reverse and then ignore the larger narrative.

Journalists are often the first to write history — and they are also the first to rewrite it. We’ve seen how cops killing Black kids is made to look like self-defense, how children crossing borders become “illegals,” or how Native elders singing songs become violent aggressors.

It’s the founding myth of this country: The cowboy will always be surrounded by hostile natives to make colonial invasion look like self-defense. That narrative won’t end unless we stop telling that story.

Correction: January 24, 2019
An earlier version of this story misstated the state where the 2017 white supremacist rally in Charlottesville took place. It was Virginia.